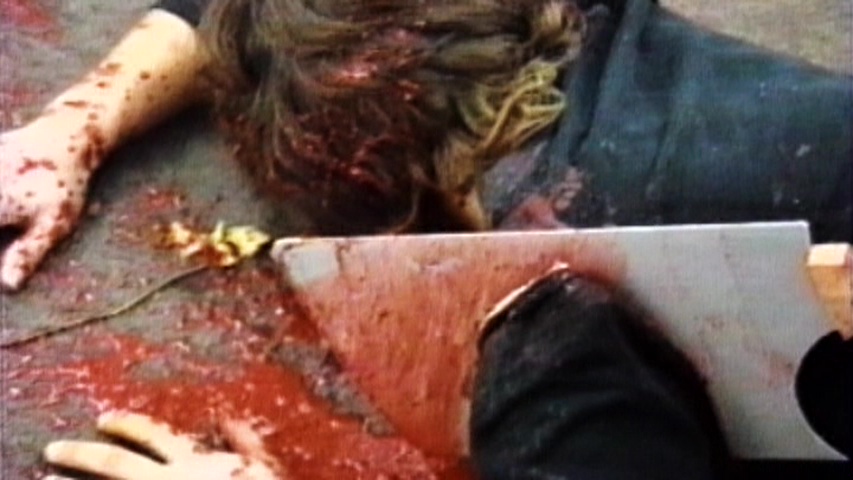 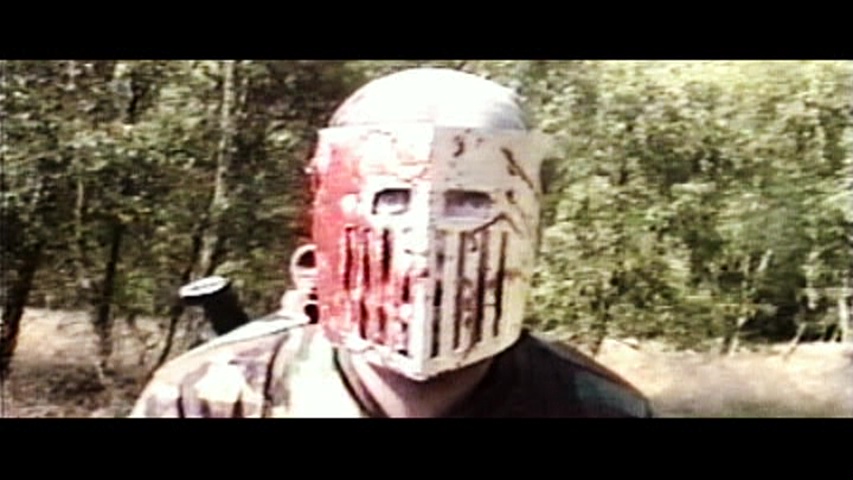 The brutal crackdown on horror films on home video in Germany is an annoyance that's still with us today, as even mainstream gore films often have to be released in censored form unless they want to be stuck under the counter and treated as pornography. This baffling state of affairs did manage to prod a number of enthusiastic German genre fans in the 1980s to pull out their camcorders and Super 8 and 16mm cameras, however, which resulted in a tidal wave of splattery homegrown epics that quickly became traded on the collector's market around the world. Some of these films turned out to be genuinely accomplished (with Jörg Buttgereit at the head of the class), while others like Olaf Ittenbach are still out there batting away with plasma-soaked labors of love that still get chopped to bits in their home country.

Then we have the curious case of Andreas Schnaas, an avid young horror buff who got his buddies together over a series of weekends in 1989 to create Violent Shit, a nearly plotless VHS wonder about a psycho named Karl (Inger), nicknamed "K the Butcher Shitter," who's been imprisoned for years after brutally killing his mom with a cleaver. He manages to escape in transit to another jail and takes off into the woods, where he lays his hands on a fresh cleaver and, donning a metal mask, proceeds to hack his way through the local populace. Bizarre religious visions and flashbacks interrupt the action, which is mostly confined to gory dismemberment in which no bodily orifice is safe. Technically inept but undeniably generous with the gore, this film was clearly designed to be a party tape with an escalating parade of (mostly) unconvincing but utterly gross practical effects as its main reason for existence. 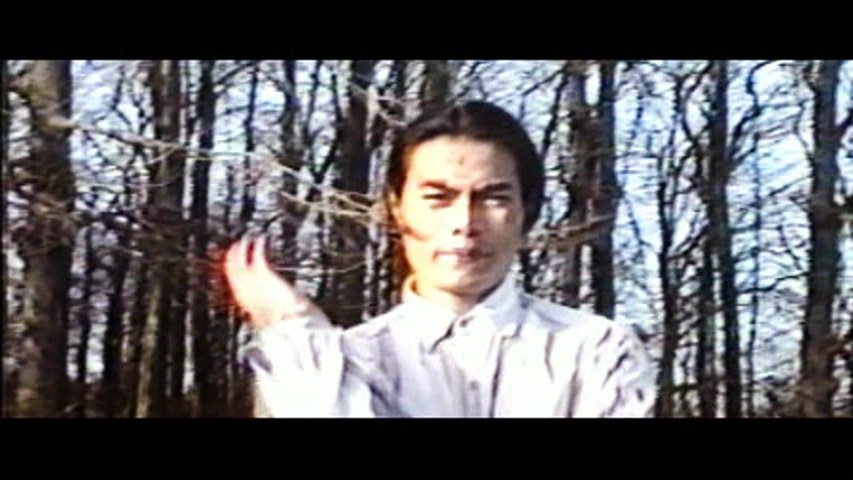 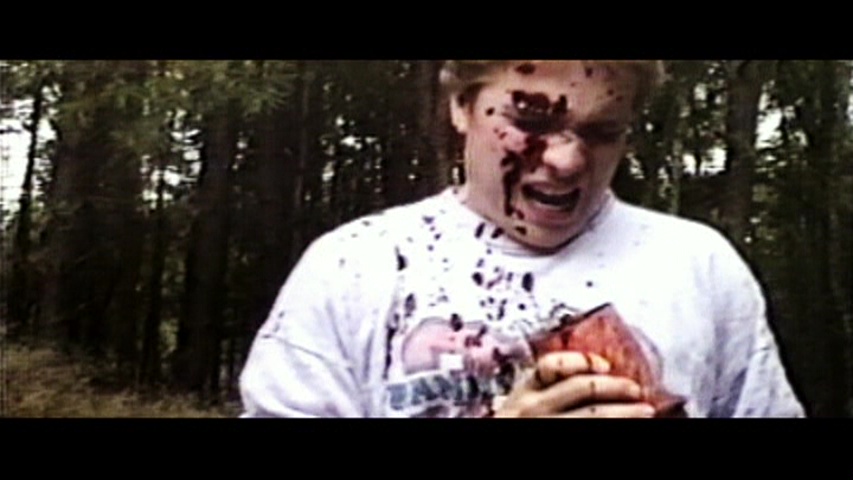 The success of this first film (which holds a place in Germany's history books as its first straight-to-video horror title) led to a sequel a few years later, Violent Shit II (sometimes subtitled Mother Hold My Hand). This time Schnaas takes on starring duties as Karl Jr., who resumes his father's work twenty years later as a reporter tries to do a story on what appear to be copycat killings. As it turns out via flashbacks, Karl Jr.'s lunatic mother (Prothmann) was the original Karl's lover and tended to his remains, which might explain why she decided to give her son a machete as a birthday present. Soon the boy's off on a vengeful spree directed at campers, joggers, and pretty much anyone else in his way, with his mother indulging in blood drinking and even more depraved acts to goad him along. Just as explicit as its predecessor, this one adds much more sick humor to the mix with li'l Karl getting a few goofy moments in between his butchery and the director clearly goofing on the slasher/extreme gore format by playing the entire ending for laughs.

The gore comedy approach continues with an additional action movie twist in Violent Shit III: Infantry of Doom (released on U.S. home video first as Zombie Doom by Shock-o-Rama), which ignores any kind of continuity altogether and brings together Karl (Trinkhaus) 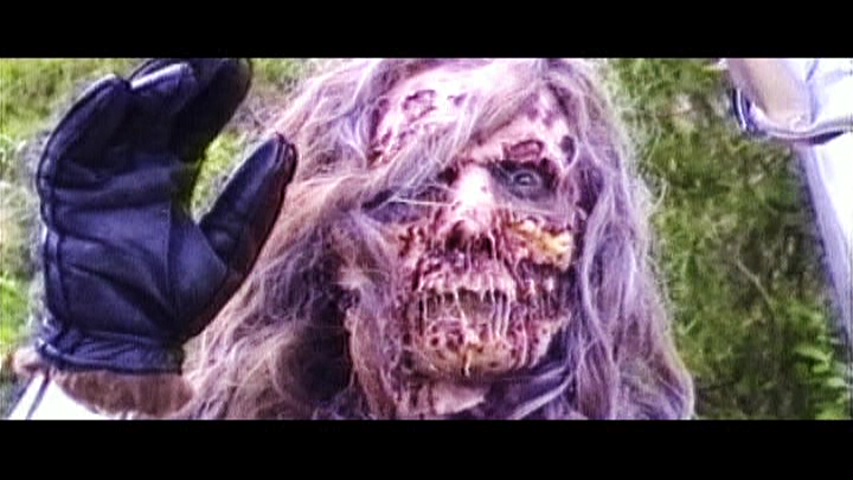 and Karl Jr. (Schnaas again) as overseers of a brutal murder island. 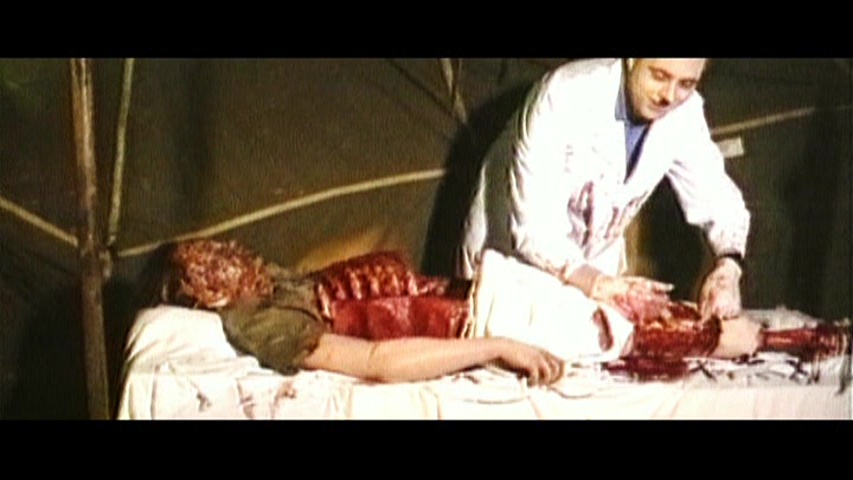 Their latest quarry is a trio of adrift friends who wash up ashore only to find themselves in the clutches of the deranged father and son, who torture and execute anyone unlucky enough to run into them. Meanwhile a mad scientist named Dr. Senius (Kerl) is creating turbo soldiers for some reason, whom he unleashes on the island's captives for a hunt to the death. Then ninjas with bazookas show up. Shot in 1993 but kept on the shelf due to distribution and post-production issues, this one is so gleefully absurd you have to wonder how anyone kept a straight face doing it. The gore still flows like crazy, but the injection of action scenes (not counting the little bit of martial arts stupidity in the second film) gives it a different and more ambitious feel that earns points for creativity if not actual execution.

Eleven years after the eventual release of the third film, Schnaas returned with his fourth and, to date, final entry in the series. (The Italian remake was done without him.) More slickly shot on digital video with the actors more or less speaking English, it does get some credit for novelty with an early scene featuring UK goth staple Eileen Daly chugging down a hose attached to a device called the Sperm Separator and a guy with a bag over his head. So there's that. This time there's a sci-fi bent as Karl the Butcher (Schnaas yet again) returns to a post-apocalyptic world after his tenure in hell, with the land controlled by raging factions including man-hating Queen Scala (Daly), a roving bunch of marauders called Gang Loco, and other wandering people for no particular reason. Many fights ensue, some involving naked women, and word gets around that a notorious killer named Axe (co-director Rose) has returned 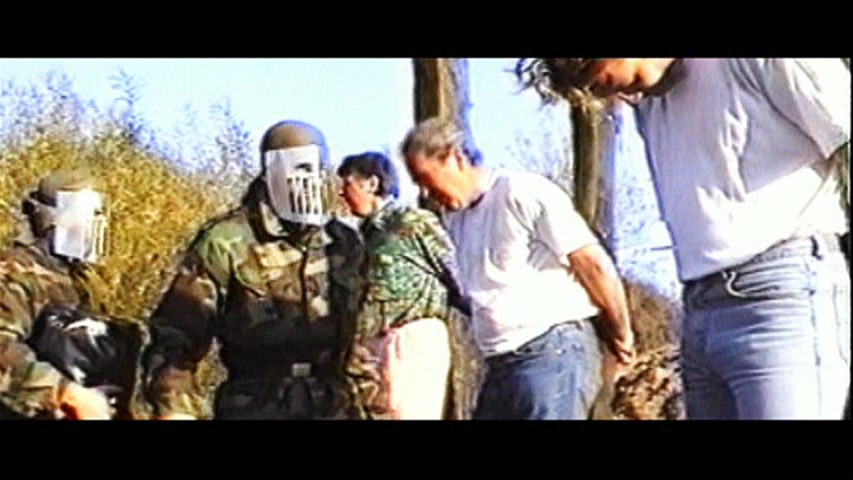 with a taste for blood. The end 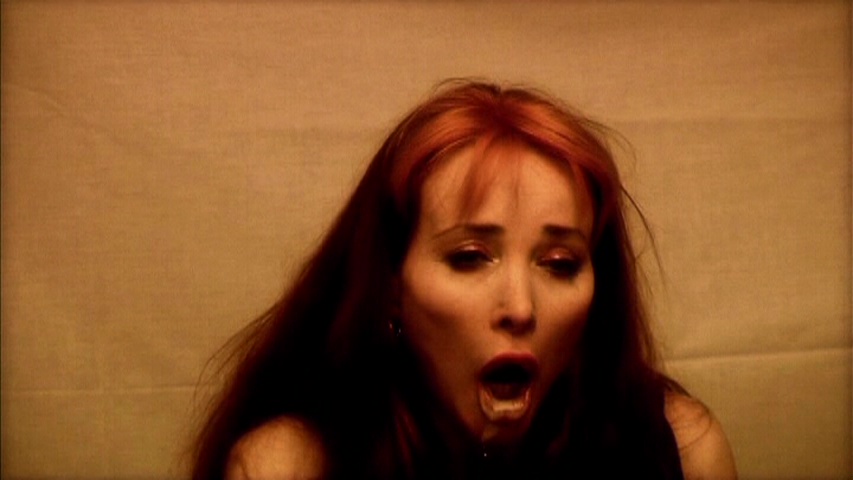 result is a lot like watching a bunch of kids playing in their backyard, with lots of silly sound effects dubbed over the many sword swings and fist blows, which is about as annoying as it sounds. The opening John Carpenter gag is really lame, too. There's also far, far less gore than usual (at least until the admittedly splashy final few minutes), and the whole thing feels so strained it'll make you nostalgic for even the worst Troma movie out there. You've been warned; consider this more of a bonus feature than an actual movie of any kind.

The first three films in the series were released as a trilogy set in Germany, first by Astro Records and then as a 20th anniversary release by Indpend'Or; both have optional English subtitles, with extras including 6 mins. of outtakes from the first film, trailers and galleries for all three, 5 mins. of premiere footage and a sample of Japanese footage from the second film, and for the third film, a baffling 10-minute "Casting" reel, a 2-minute Japanese-dubbed excerpt, a 6-minute making-of featurette (called "Swallow My Smack"), a teaser, and 4 mins. of premiere footage. The films are all presented flat letterboxed, with the first film at 1.78:1 and the others at 2.35:1.

Considerably more elaborate is the 2017 three-disc release from Synapse, which adds on two feature films and a different slate of extras. The first three features are presented in anamorphic widescreen, basically bumped up to 16x9 so you don't have to reach for the zoom button on your remote anymore. Bearing in mind these were all shot on really low-grade video, what you see is what you get here right off of the first-generation tapes. It ain't pretty, but then again, these films probably shouldn't be in the first place. 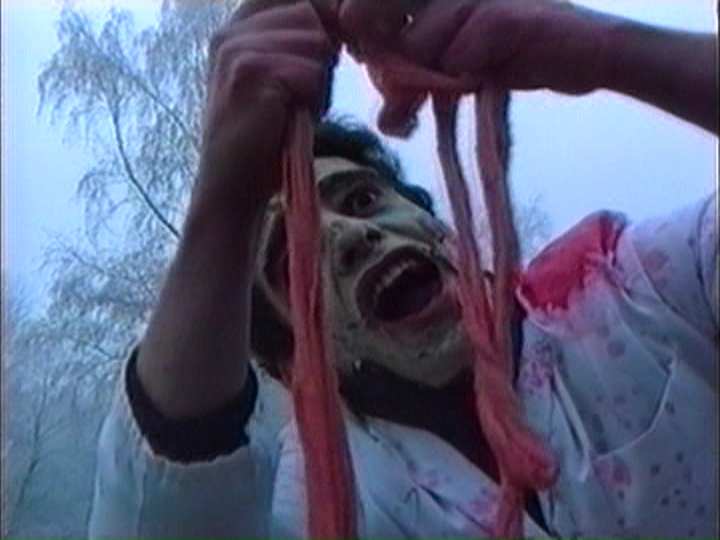 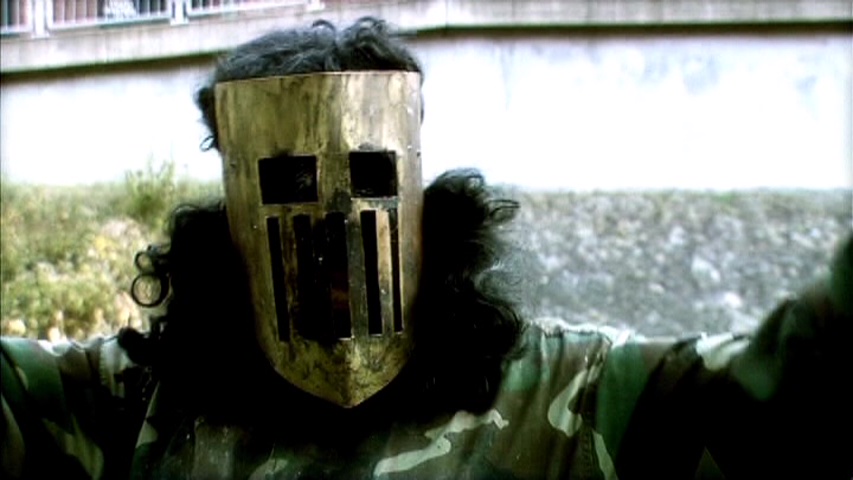 On the third disc is Schnaas' brain-destroying second feature, Zombie '90: Extreme Pestilence, which plays like his stab at a Bruno Mattei film as it follows a pair of doctors (Kerl and Hess) looking very nonplussed as they try to stop a zombie plague initiated in their hospital with a patient spilling his guts all over the bed. Among the delights on display are a chainsaw-wielding zombie in the woods, gut munching, genital mutilation, a flying decapitated head, an ending swiped from Lucio Fulci's Zombie, and a lot of ugly sweaters. What makes this one priceless is the spectacularly English dub, apparently performed by people under the influence of hard drugs as they offer voices ranging from jive talk to squeaky mice voices. On top of that you get lines like a potential victim in a car explaining as he's going to investigate a strange noise, "Oh, baby, I gotta go out and take a dump anyway. I have to take this gun. It's the only thing that kills the odor from my shit." In short, it's a laugh riot from start to finish. This bonus disc also contains a 16-minute sample of footage from the fourth film's Hamburg premiere (with live music performances), plus its trailer, teaser, and 10-minute behind-the-scenes featurette. Also included is an insert with appreciative liner notes by We Are Still Here filmmaker Ted Geoghegan, who also penned the screenplay for Schnaas' Nikos the Impaler.