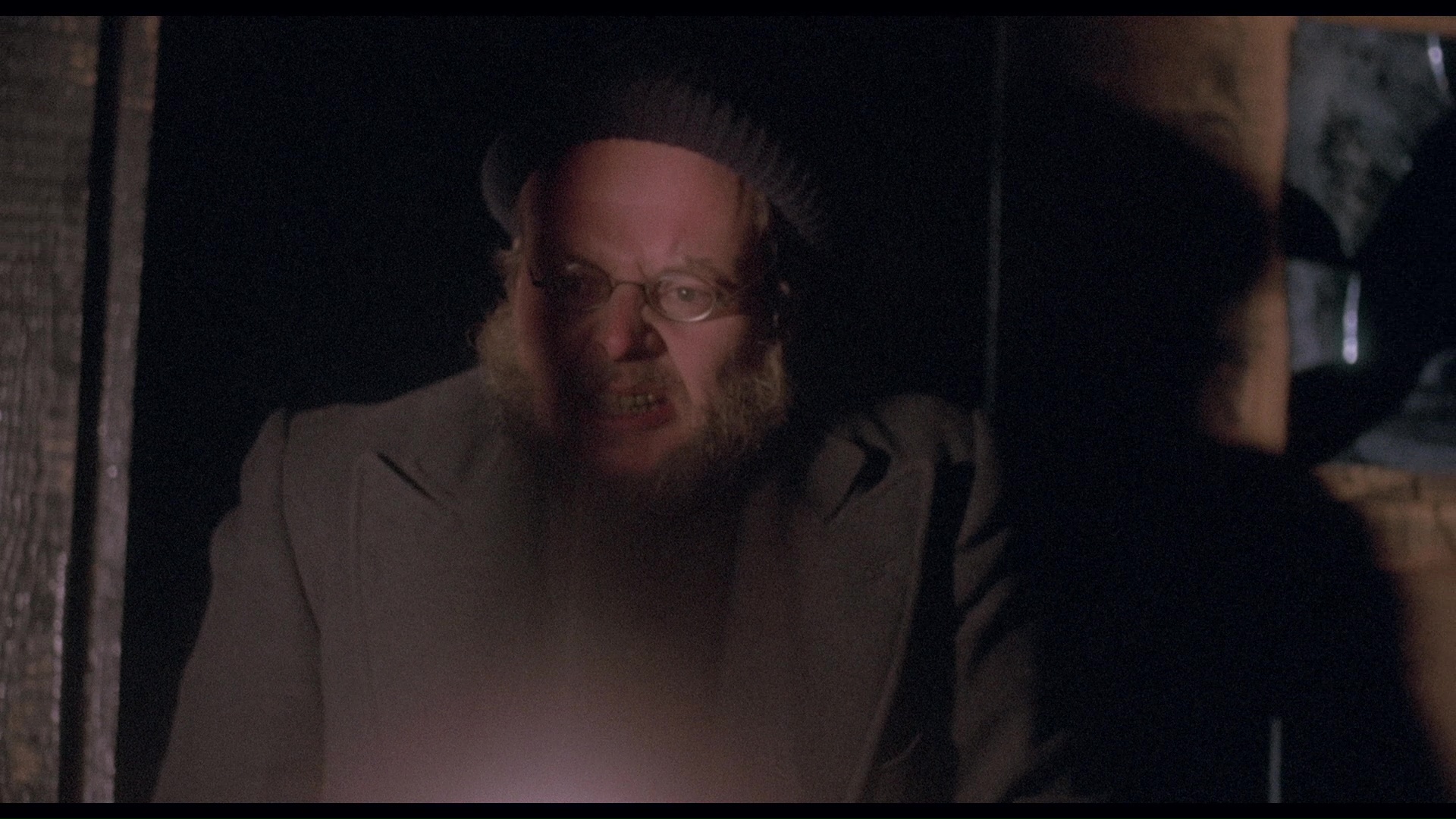 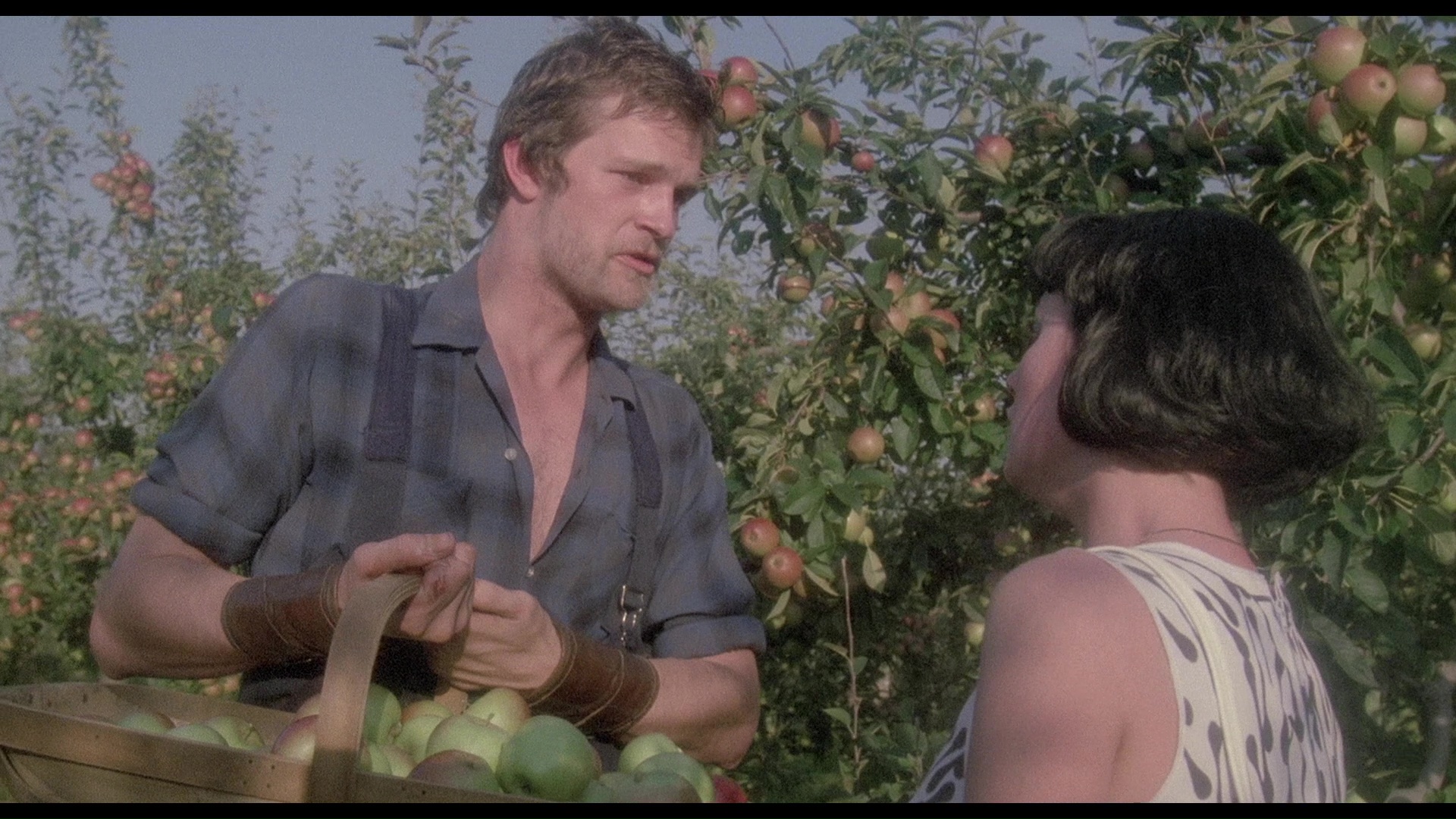 story follows the sinister aftermath of an afternoon outing for Pauline (Hyde), a raven-haired young woman who goes from the suburbs to the Kent countryside for a romantic encounter during a cricket match. However, her dissatisfaction with the date sends her wandering to a nearby road where she's invited into the gnome-decorated home of a cheerful, bespectacled hunchback stationmaster (Wallis). Their chatty teatime is interrupted by his hulking lodger, Ewan (Alien 3's Mantle), who greets Pauline by smashing a rabbit to death on the table and taking it outside for skinning. (Be warned if you're an animal lover, it's pretty unflinching.) A distressed Pauline walks back through the adjoining apple orchard, where she bumps into Ewan and struggles with him in a remote apple depository called Bunny's Hole. As you can probably guess from the title, things go horribly wrong as the orchard turns into a massive crime scene and the surviving characters find a way to deal with the aftermath.

Despite the disclaimer about being fictitious in the closing credits, this film was closely based on an actual crime in Kent and certainly has an eerie true crime feel about it. The main three actors are all quite good with the gorgeous Hyde essentially owning the first act of the film and future TV staple Mantle (in his debut) getting the meatiest material in the second half. Keep an eye out for a quick appearance by the late Rik Mayall (The Young Ones, Drop Dead Fred) near the end, before he went on to British comedy fame. The cheerful music score also helps guide the film's mood between macabre perversity and comedy, and the atmosphere feels like a cross between Alfred Hitchcock's Frenzy and another 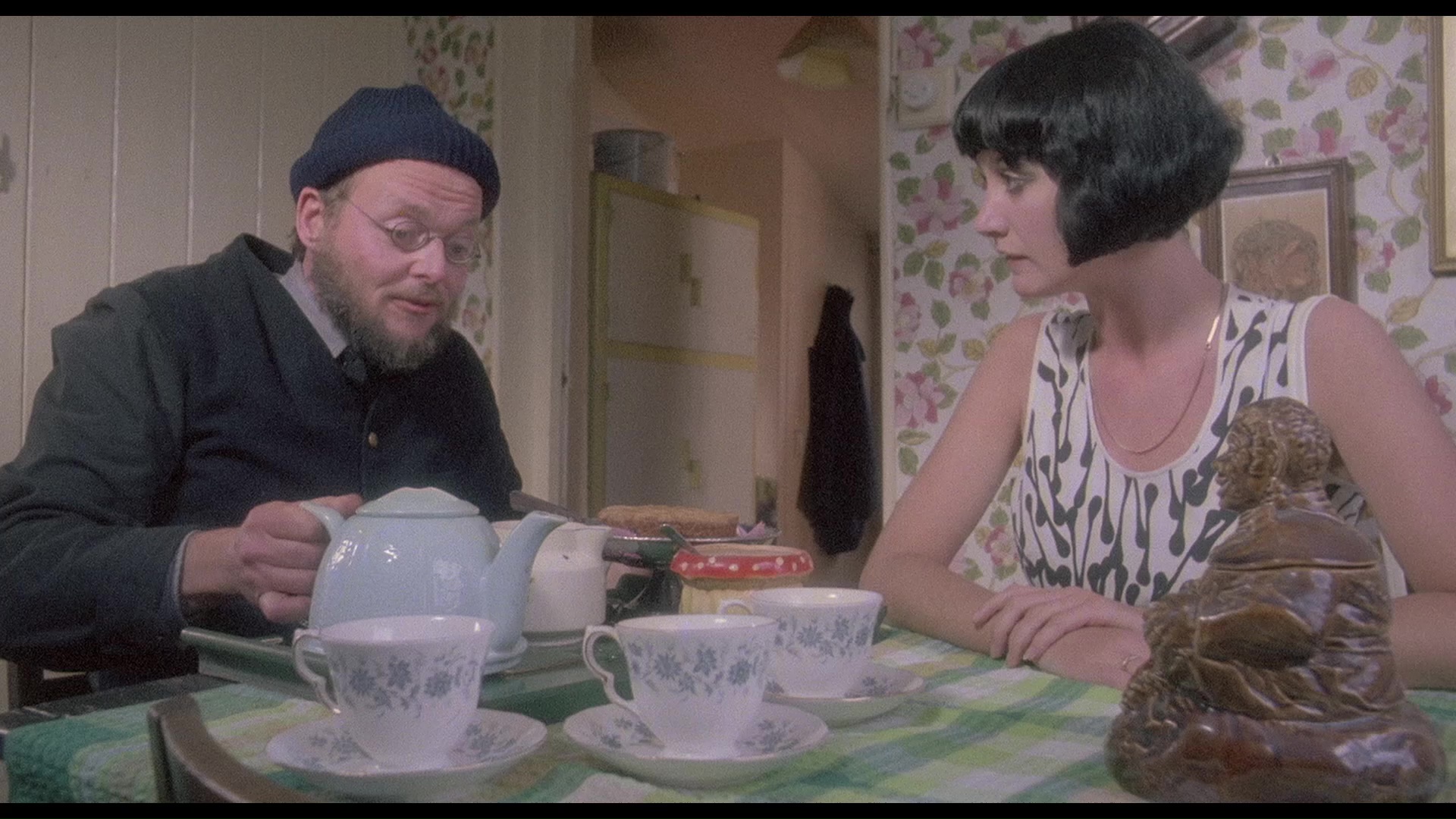 1980 production, the chilling "The Flypaper" episode of Tales of the Unexpected. Bonus points for the most excessive, overripe (sorry) use of apples in cinema this side of Neil 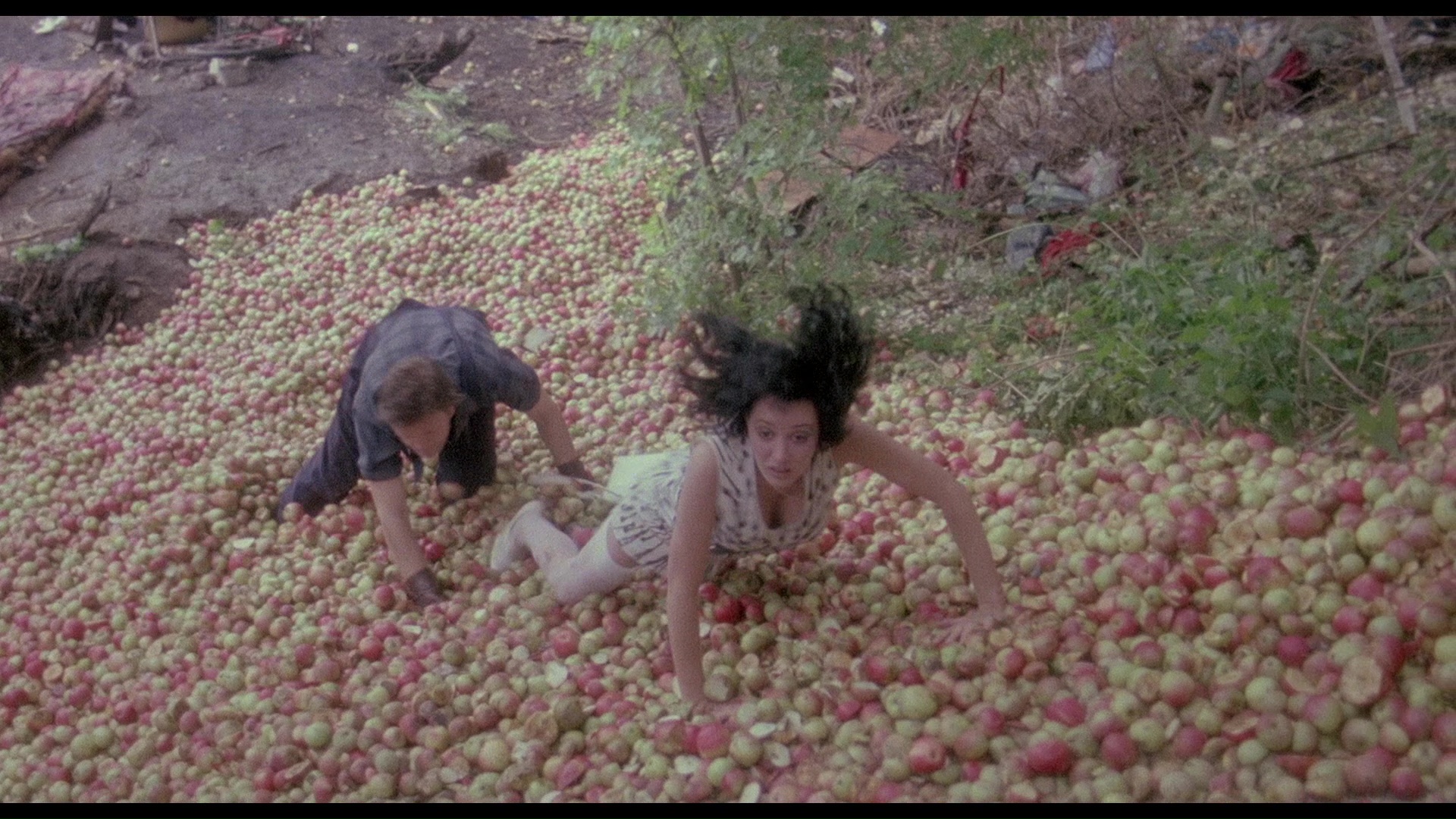 Jordan's In Dreams. There's some clever social commentary, too, with the one murder here contrasted with an unending stream of horrific news piping out of the radio.

The BFI Flipside series had been fairly quiet recently after a quartet of essential releases in 2016 (Psychomania, Symptoms, Expresso Bongo, and Beat Girl) and one low-profile release at the start of 2017 (Long Shot), but it came back in fine form in mid-2017 with this odd little gem that's been almost completely buried since its original release (in 1981 as a co-feature with Dead and Buried!) apart from a BBC airing in the '80s. Like other Flipside titles, The Orchard End Murder straddles a queasy line between art and trash, with beautiful pastoral photography contrasting with shocking jolts like a savage attack scene and implied necrophilia.

The dual-format Blu-ray and DVD release features a pristine new HD transfer that's up to the standard of the series' other releases (though the opening distributor logo is obviously taken from a scratchy film print; don't worry, the film itself looks great). The LPCM mono is mostly clean and sharp, though some deterioration and crackling can be heard in the last two minutes; optional English SDH subtitles are provided.

The biggest video extra here is The Showman (25m46s), an oddball documentary by this film's director, Christian Marnham, about a colorful sideshow personality and "genuine showman" Wally Shufflebottom who hawks girlie shows at a fairground -- with his wife helping along. Complete with burlesque topless knife throwing and flaming axes, it's exactly the kind of crazed curio you'd expect to stumble across on a Something Weird release and is virtually worth the price tag here all by itself. Marnham appears for 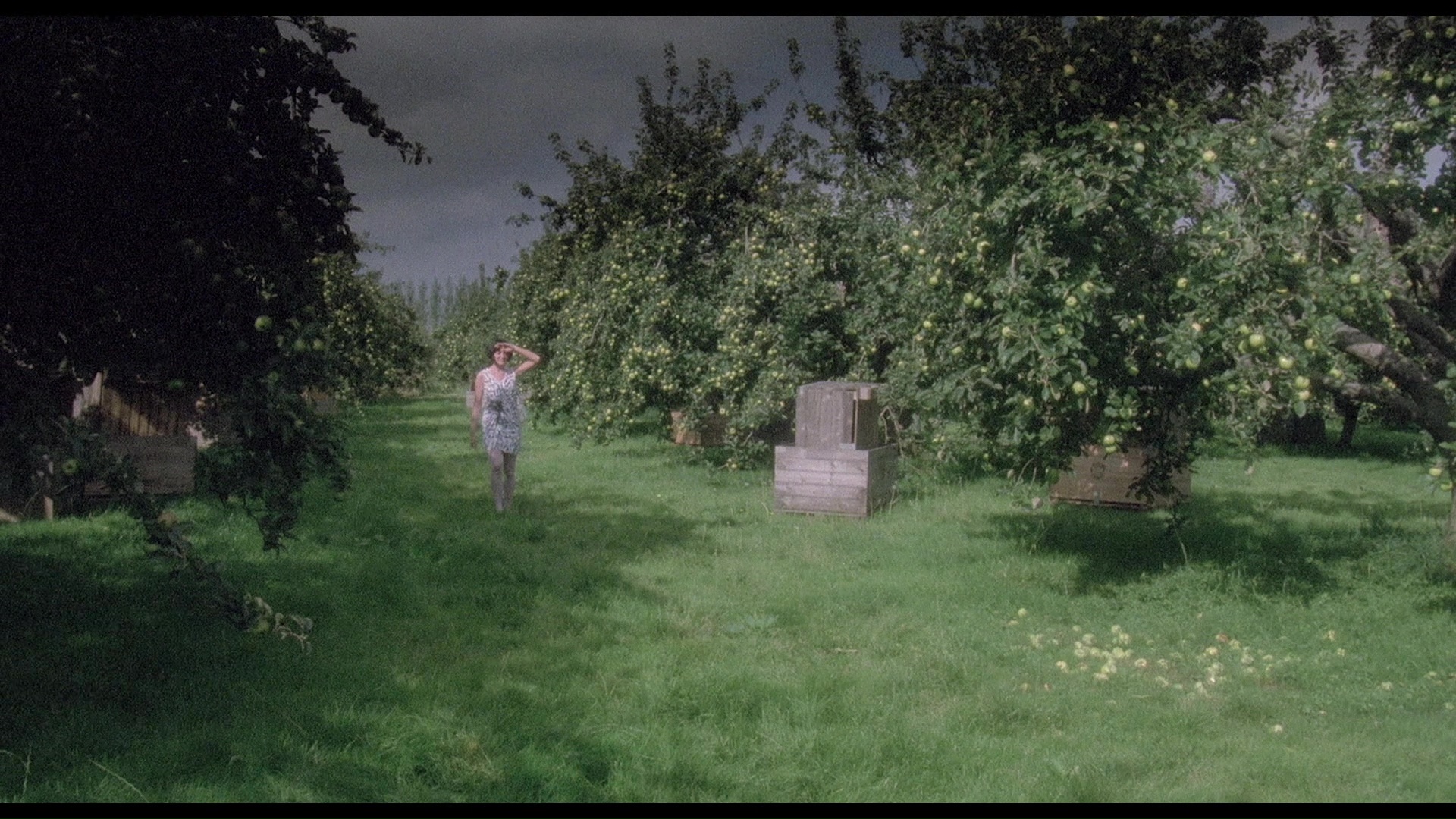 separate interviews about The Orchard End Murder (37m26s) and The Showman (4m40s), chatting at 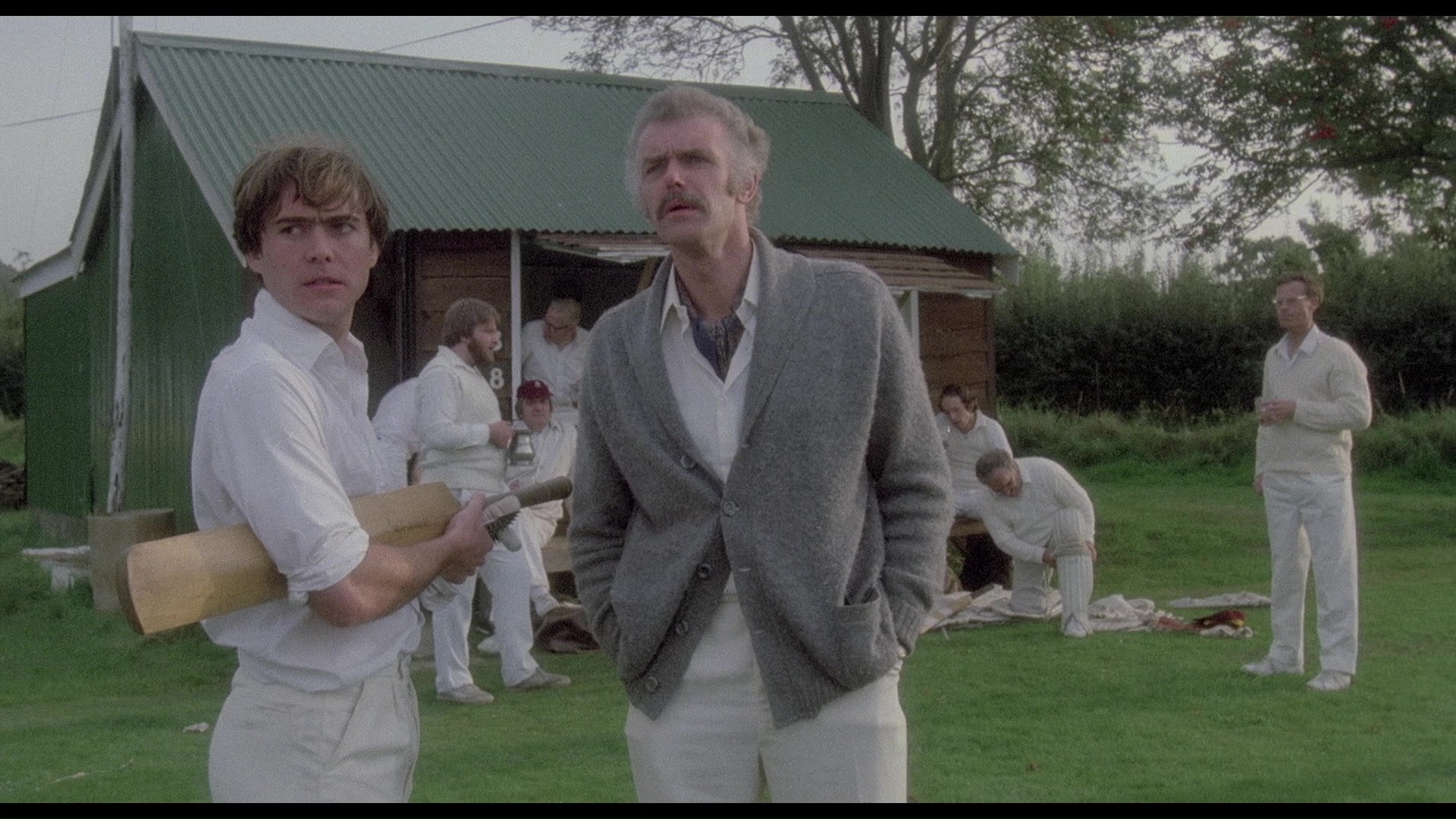 length about the real location that inspired the setting, a true crime incident that figured into the central killing, his cinematic education as a commercial editor brushing shoulders with Hugh Hudson and Nicolas Roeg, and the gypsies who played a pivotal role in his creative life. Hyde, who made this film in between the beloved Bee Gees-scored Melody and the wild Jacek Bromski musical Alice, appears for an upbeat interview (11m19s) about her fairly short career in showbiz, including memories of working multiple times with the late Jack Wild and her happiness with the resurfacing of this film. Last up in an interview with actor David Wilkinson (12m28s), who has a cricket-playing role early in the film and discusses making this after the "dreadful" Birth of the Beatles as he was making the transition to producing full time. (Amusingly, he also couldn't really play cricket and "conned them all" by faking it on camera). The enclosed liner notes booklet features an illuminated essay by Josephine Botting, "Red Riding Hood from Suburbia," about the film's history near the end of program fillers in British cinemas, the story behind distributor GTO, whose logo adorns this transfer, and the merits of the cinematography by regular Pete Walker lenser Pete Jessop. Also featured are a brief archival review by Tim Pulleine and additional welcome notes on The Showman by the BFI's Vic Pratt. In early 2018, the film made its U.S. home video debut as separate Blu-ray and DVD releases from Redemption Films via Kino Lorber, featuring the same video extras (no liner notes) and a transfer that looks nearly identical side by side apart from slightly deeper blacks. Definitely take a chance on this one.