As melancholy and twisted as a mainstream '80s horror film could possibly be, Dead and Buried has gradually earned its sleeper reputation over the years but still hasn't received the kind of credit it 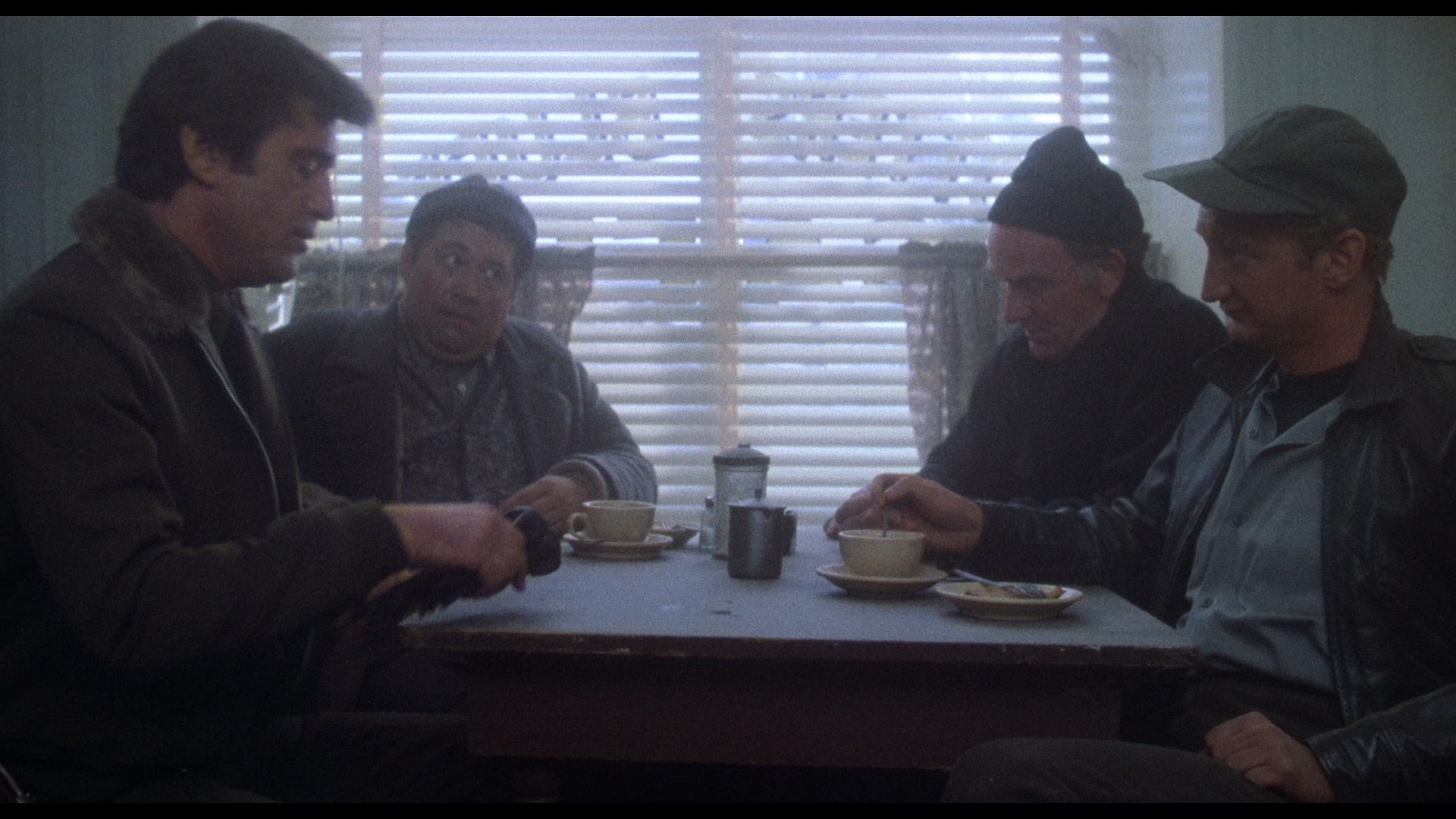 deserves. This peculiar blend of small town menace, zombies, voodoo, and jolting plot twists still packs a punch today long after its slasher brethren have faded into the woodwork, and the shock ending will definitely linger in your memory long afterward.

The film opens along the coastline of Potter's Bluff, where a photographer (Christpher Allport) has stopped to snap a few nature shots. A beautiful young woman (Lisa Blount) strikes up a conversation with him and asks whether she could be a model. The photographer offers to take her photograph, and she responds in an unusually seductive manner. Unfortunately, their romantic idyll is shattered when a group of strangers suddenly appear, tie up the hapless photographer, douse him with gasoline, and set him ablaze while recording his death throes via photographs and film. Later the town sheriff, Dan (James 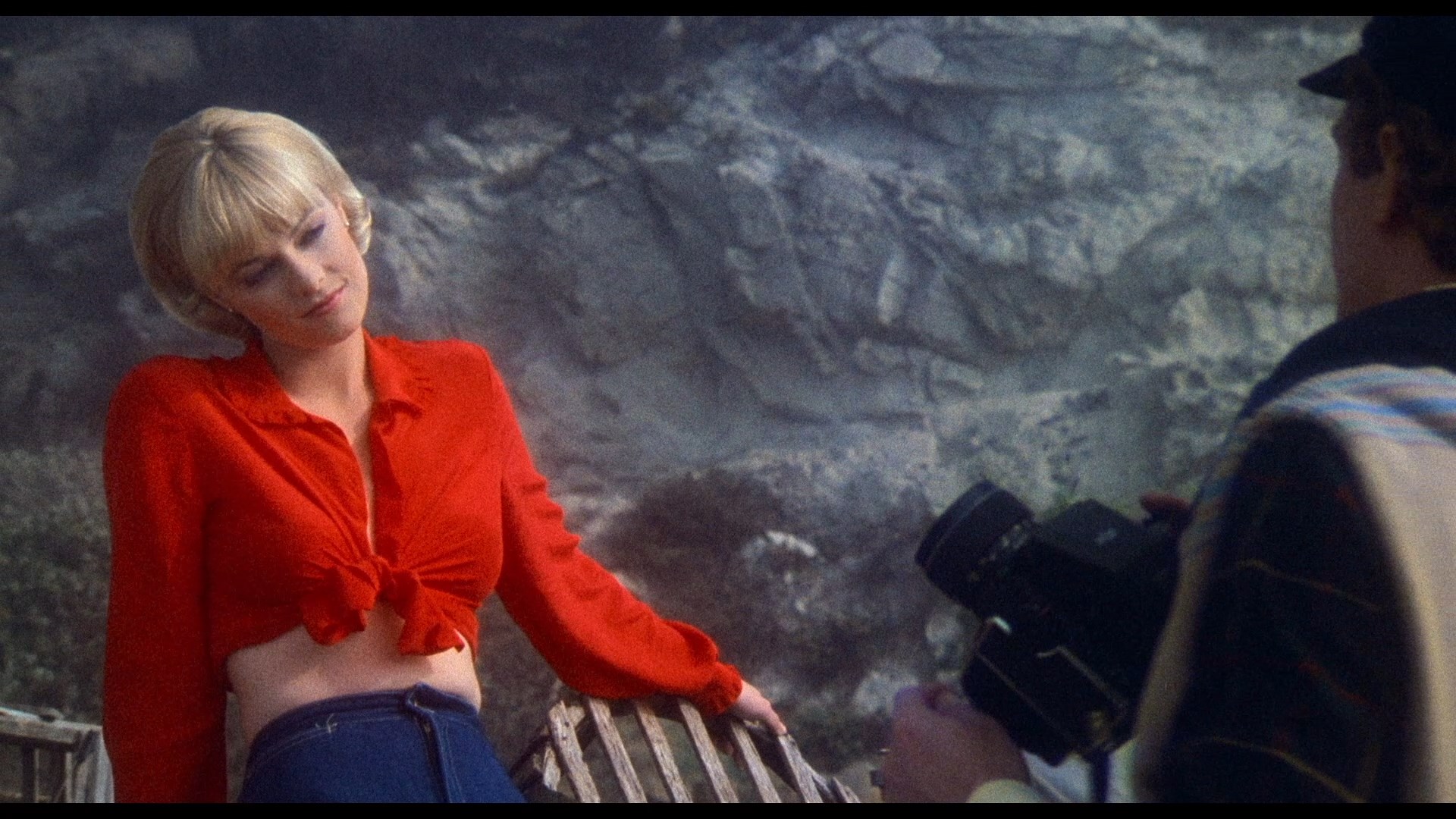 Farentino), is called in to investigate a car crash, which has left its victim burned beyond recognition. Dan begins to suspect that the burning occurred outside of the accident, a theory he attempts to sell to the quirky local coroner, William Dobbs (Jack Albertson in his last screen role). Dan's tranquil home life with his beautiful wife, Janet (Flash Gordon's Melody Anderson), becomes strained as Dan is convinced that a mounting number of gruesome accidents could be related to the occult. Even worse, the victims have a nasty habit of coming back to life... and taking their place among the townspeople.

Written and performed with a quirky style hovering somewhere between macabre comedy and utter despair, Dead and Buried cannily uses its TV-friendly cast to gradually undermine viewers' expectations. The film has earned a reputation for its graphic gore and came under fire in the U.K., though Stan Winston's gruesome effects actually occupy a relatively small amount of screen time. In fact, the most memorable violent effect involves a simple syringe and no blood whatsoever. Apart from a prolonged and unfortunately fake-looking bit involving acid and one character's nasal cavities, the violence never overwhelms the compelling storyline which gradually tightens to a delirious final act. Genre fans in particular should look 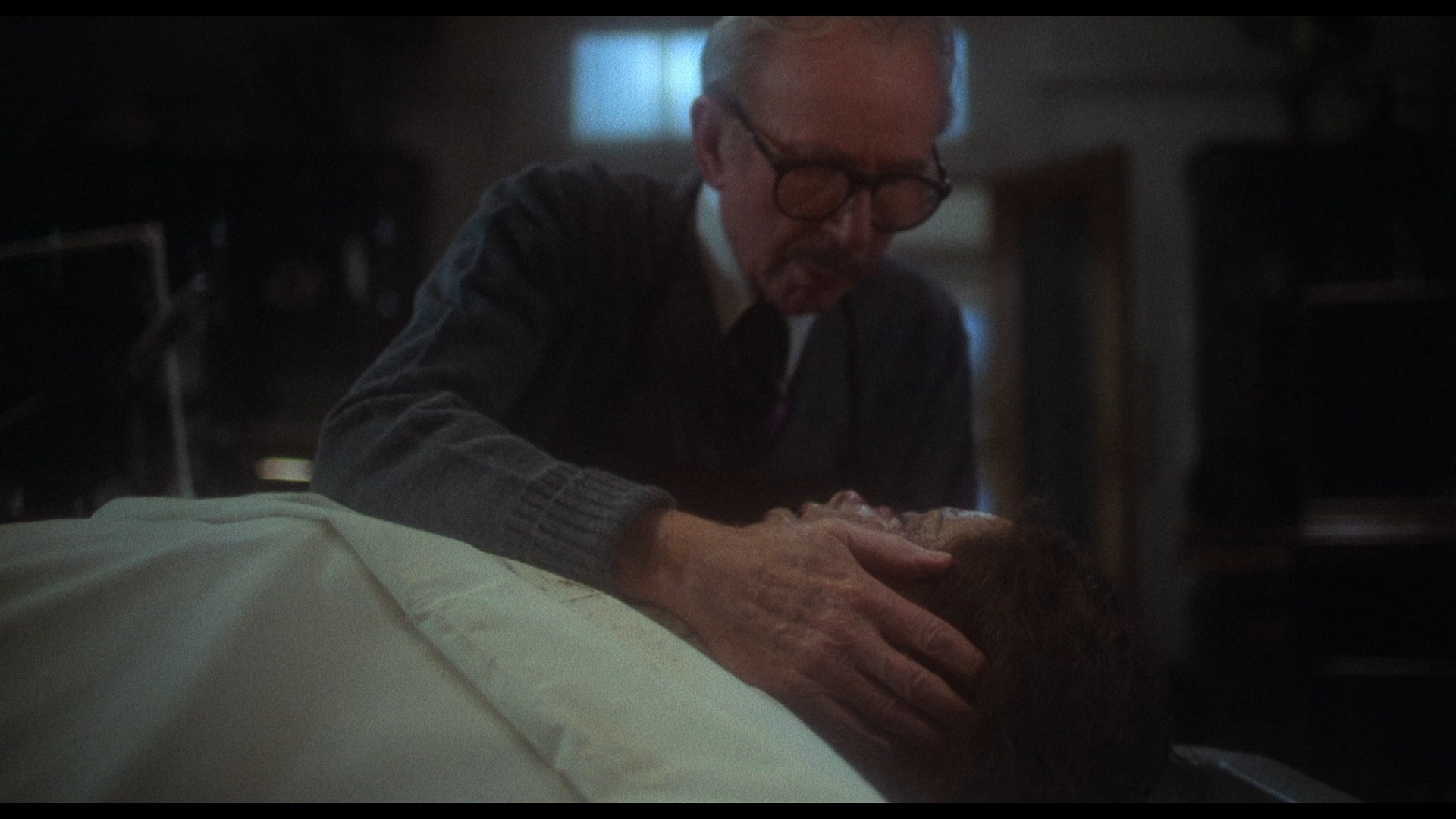 for an early role by Freddy Krueger himself, Robert Englund, and a haunting music score by Joe Renzetti, who later went on to Child's Play and several Frank Henenlotter films. (For more Renzetti info, click here. Oddly enough, this film also marked a directorial comeback for Gary Sherman, who had vanished for ten years after the magnificent British shocker, Death Line (a.k.a. Raw Meat). Unfortunately his career quickly went downhill, distinguished only by the memorable drive-in favorites Vice Squad and Wanted: Dead or Alive and 1989's criminally underrated thriller, Lisa. 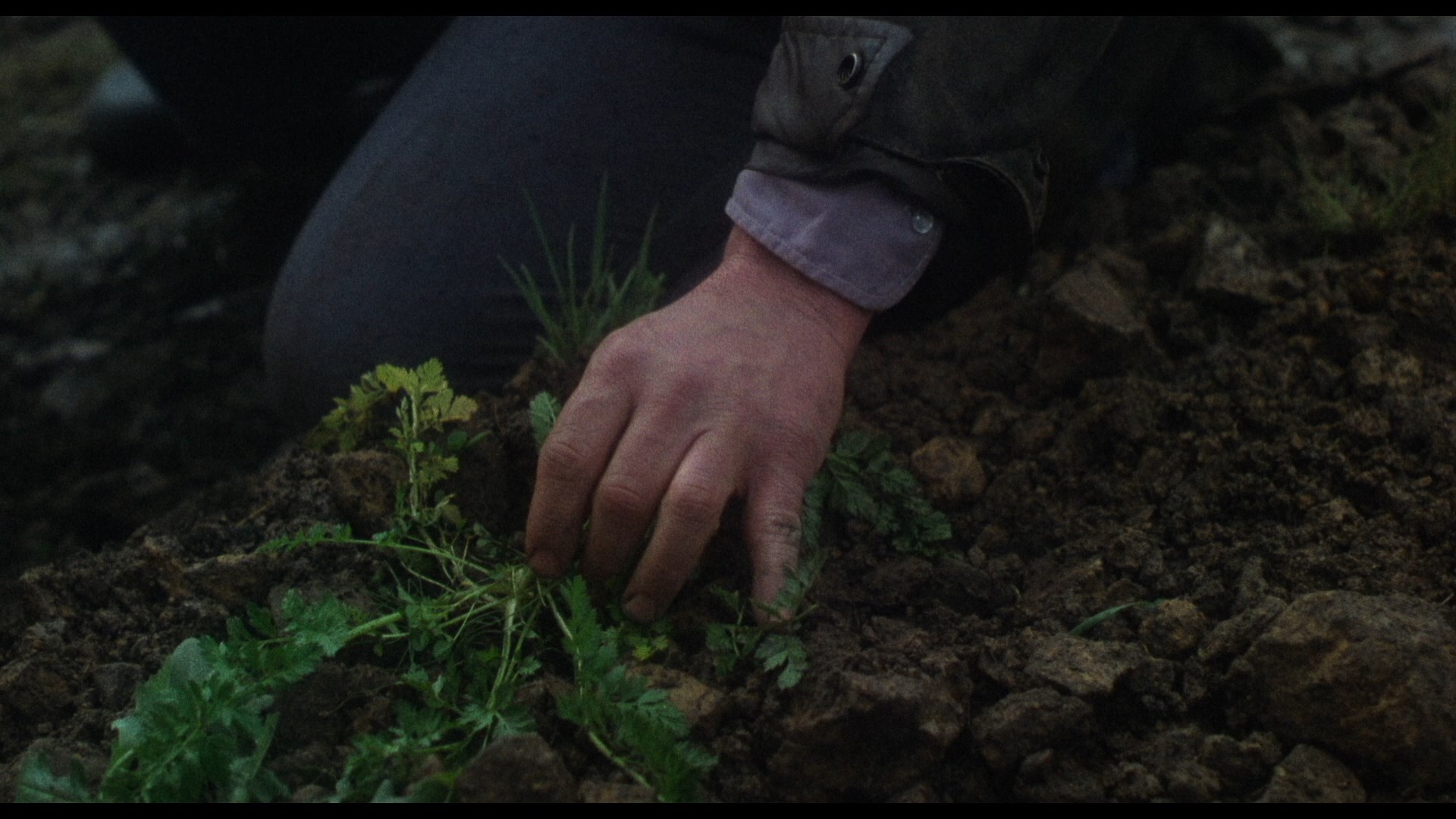 Dead and Buried had the extreme misfortune of being released on VHS by Vestron, whose shoddy early transfers hit rock bottom here. Almost completely devoid of color, this tape sabotaged the film's carefully modulated misty atmosphere and completely removed the upper and lower matte on the image, exposing safety clips holding up the black and white photographs during the opening credits, among other goofs. The first DVD appeared from Dragon in Geermany and matted the film to 1.66:1, though the transfer itself still left a lot to be desired. The heavy doses of grain and overworked digital noise reduction distortion made for a less than satisfying picture, but at least the original color schemes were back in place.

Salvation more or less arrived with the US edition from Blue Underground, who issued the film in two different standard def DVD editions, a double-disc special edition as well as a single disc. The first platter contains the feature film, remastered in anamorphic widescreen but plagued with an insane amount of film grain which, coupled with what appears to be some slightly overzealous edge enhancement, results in a wildly inconsistent presentation. Night scenes are still almost unwatchable, while wide exterior shots appear to be under siege by waves of gnats. Colors are fine, though, and it's a huge leap up compared to bootleg and import editions. The DTS and Dolby 5.1 tracks only make sparing use of the rear channels but have some nice directional effects in the front, especially the early nocturnal car wreck inspection. You also get the original mono track and a 2.0 stereo mixdown, though the remix sounds natural and faithful enough that only die-hard purists may opt for these options. Extras on disc one include the US theatrical trailer, the more graphic international trailer, and a teaser trailer (all making use of that fantastic promotional art), a gallery of stills and posters, and best of all, three(!) audio commentaries. Sherman goes solo in the first track, the best and most controversial of the bunch, as he covers the changes the film underwent from conception to finished product; apparently it was much more of a black comedy in conception, but the financiers demanded a more marketable straight horror film which resulted in rewrites and reshoots. This also explains why the film essentially cheats in a handful of key scenes; for example, after watching the climactic scene, try figuring out how the resuscitation of certain townspeople was carried out if a certain key figure wasn't in the room at the time. Co-writer and producer Ronald Shusett and his wife, actress Linda Turley (who appears in the film), appear for track two, while cinematographer Steve Poster handles the third; they're both more straight production commentaries and cover the locales, the selection of the actors, and much, much more. Disc two in the "limited" DVD edition (of 50,000 units, which doesn't sound all that limited) contains three video interviews, with legendary and sadly missed FX maestro Stan winston proudly talking about his achievements in this film (amazingly, he did this the same year as The Entity, The Hand, and Heartbeeps!). Then Robert Englund pops up for the second featurette, talking about this early role (not long after his memorable horror debut in Eaten Alive) and briefly covering his memories of his fellow actors. Finally "Dan O'Bannon: Crafting Fear" features the Alien alumnus talking about his involvement in writign the film and quickly tying it together with his other films of the same period. All the supplements are credited to David Gregory, who also does a solid job moderating the three commentaries. Disc two rounds up with an additional gallery of B&W behind-the-scenes and location photographs taken by Steve Poster.

In a surprise move, Dead and Buried was announced as Blue Underground's third Blu-ray release; of course, anyone familiar with the format had ample reason to shudder in dread, as the format is notoriously cruel to films heavy with natural film grain (which led William Friedkin to completely demolish the entire visual scheme of The French Connection for its botched BD release, to name but one example). Considering this was widely known as one of the grainiest American DVDs out there, fans had ample reason to worry, but the end result is happily much better than expected. The second half of the main titles onfolding over beach shots still look very problematic due to the heavy film processing (as usual, the sky looks so noisy you feel like you need to adjust an antenna), but after that it's a huge improvement over the DVD. The edge enhancement isn't nearly as severe, and while there is a naturalistic film-like feel to the images, the highly increased detail results in a much more solid, satisfying presentation. The night scenes in particular are much more coherent and solid-looking for the most part, while the highly textured shots (such as Freddy's camera lens POV in the opening scene) are stable and free from the shimmering and jittering which plagued the standard def version. You can happily chalk this one up as a winner. In another nice touch, the film has also finally been given English subtitles for the deaf and hearing impaired, along with optional Spanish and French subtitles. The soundstage this time is bumped up to uncompressed DTS and Dolby 7.1 options; both sound great, but don't expect a massive leap over the DVD audio. The music benefits considerably from the lack of compression, of course, but otherwise the mix is very similar. All of the commentaries are carried over here along with the three trailers and all of the video featurettes; the only missing aspects are the mono and 2.0 audio tracks (no huge loss) and the two galleries, but the upgrade in quality and the ease of having all the goodies together on one disc makes the Blu-ray the clear winner.