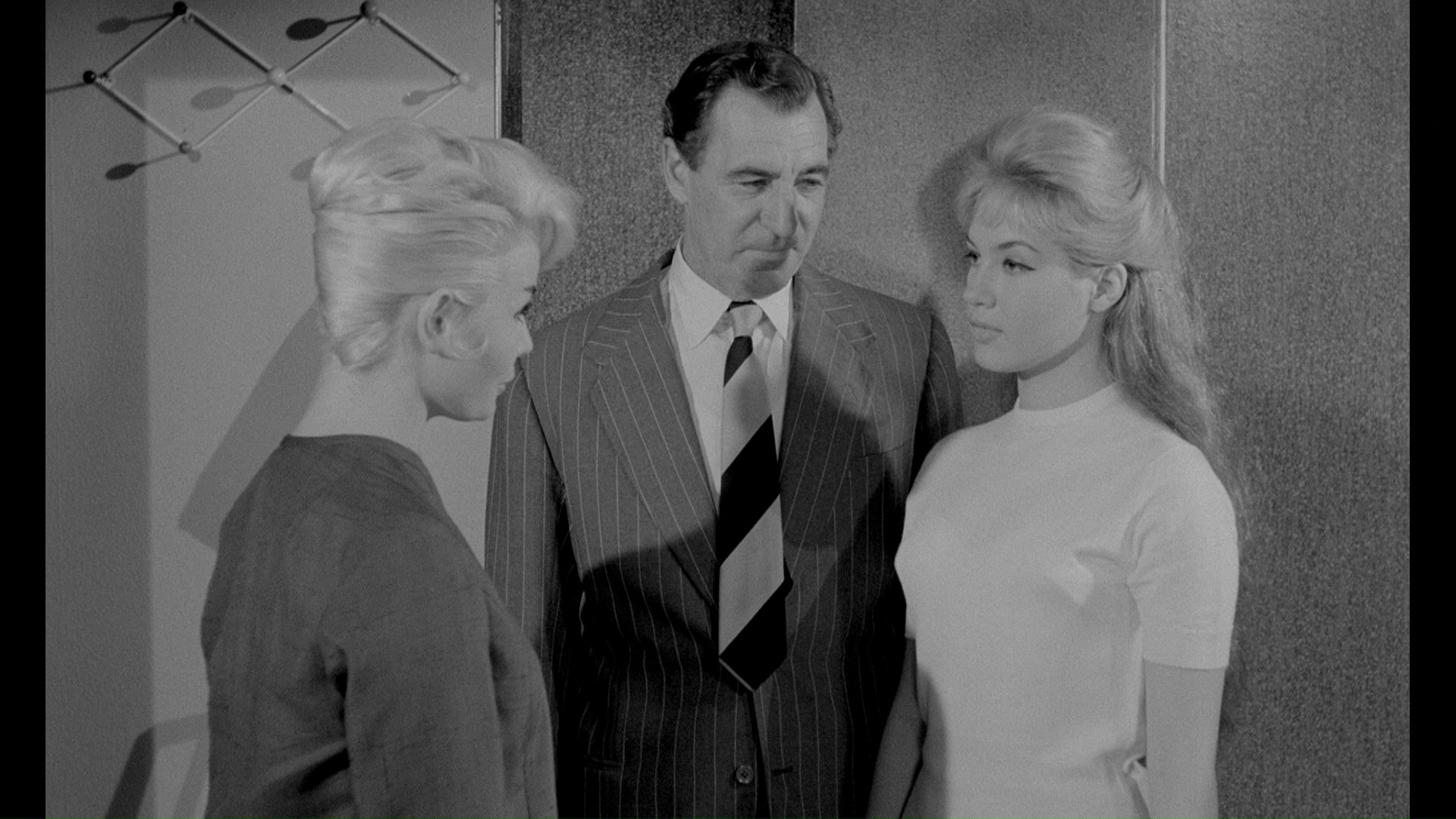 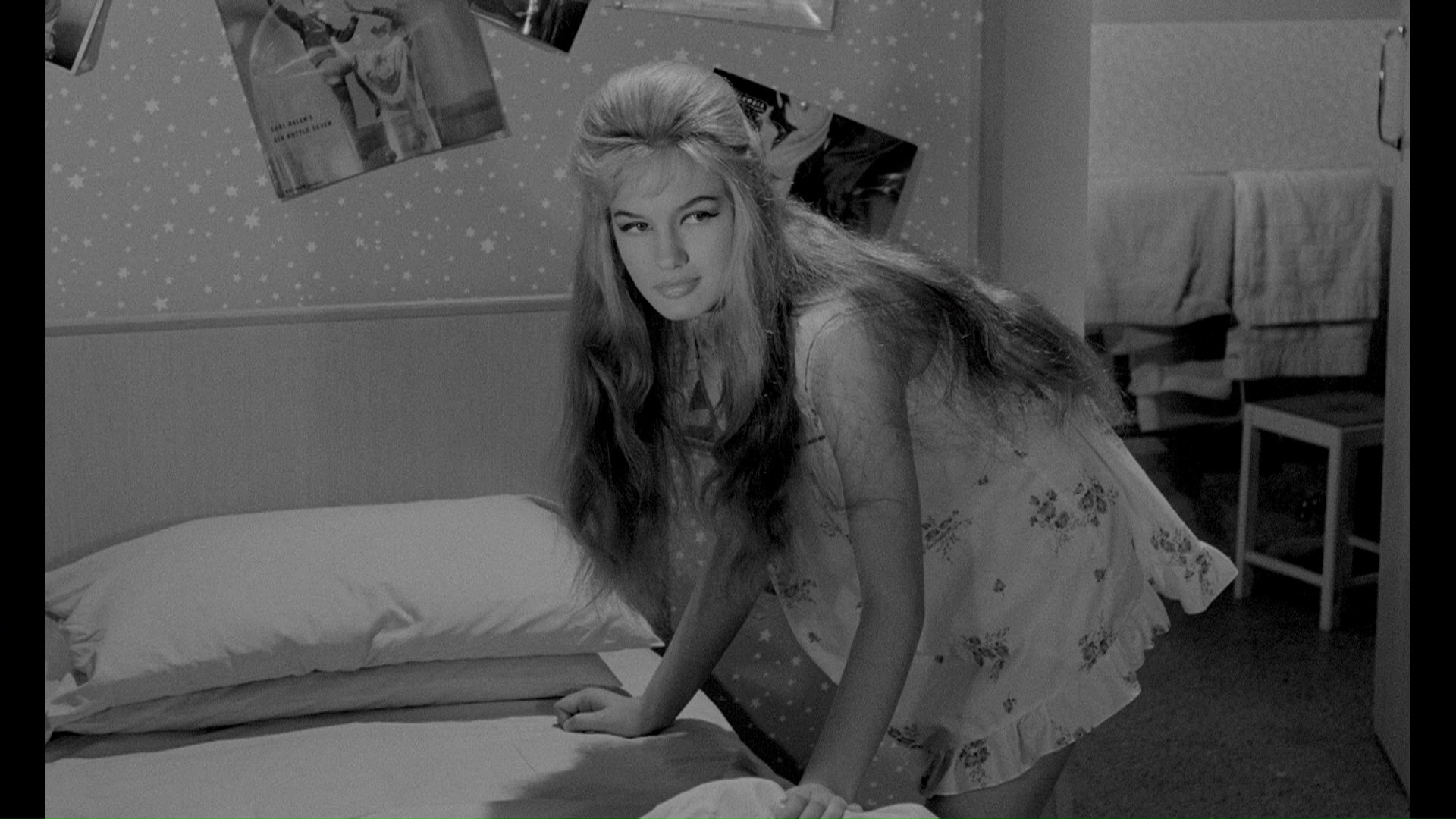 The "teens gone wild" craze had virtually run its course in American drive-ins when this memorable British variation opened in 1960, also cashing in on the rising fad of “beat music” (a musical mash up of rock, R&B, and doo-wop). The term didn’t really catch on in the U.S. so American teenagers caught it in drastically edited form as Wild for Kicks, with the salacious striptease numbers added for extra continental appeal hitting the cutting room floor in the process. In fact, at least four different versions of the film have floated around over the years, making it difficult to determine exactly what the definitive cut might be.

Gillian Hills, who later went on to fame by frolicking naked with Jane Birkin in Blow-up and appearing in Hammer’s Demons of the Mind, stars here as Jennifer Linden, a disaffected teen whose divorced architect dad, Paul (Farrar), has just married a French émigré, Nichole (Adam). We first see Jennifer in her natural habitat, a smoky beat café where she sways to infectious music (the first film score by the legendary John Barry) and dances with her equally antisocial friends including Dave (pop singer Adam Faith), Tony (McEnery), Plaid Shirt (Reed, who appeared in The Curse of the Werewolf the same year), and Dodo (Field). They also go out for wild joyrides at night, allowing Jennifer to vent her frustration at being cast aside for this French interloper. When Nichole crashes Jennifer’s favorite hangout, the girl suspects something’s up when a stripper next door at Les Girls recognizes the new stepmother; this turn of events puts Jennifer in the sights of the club’s greasy, predatory owner, Kenny (Lee), who’s related to Nichole’s less-than-pristine past. 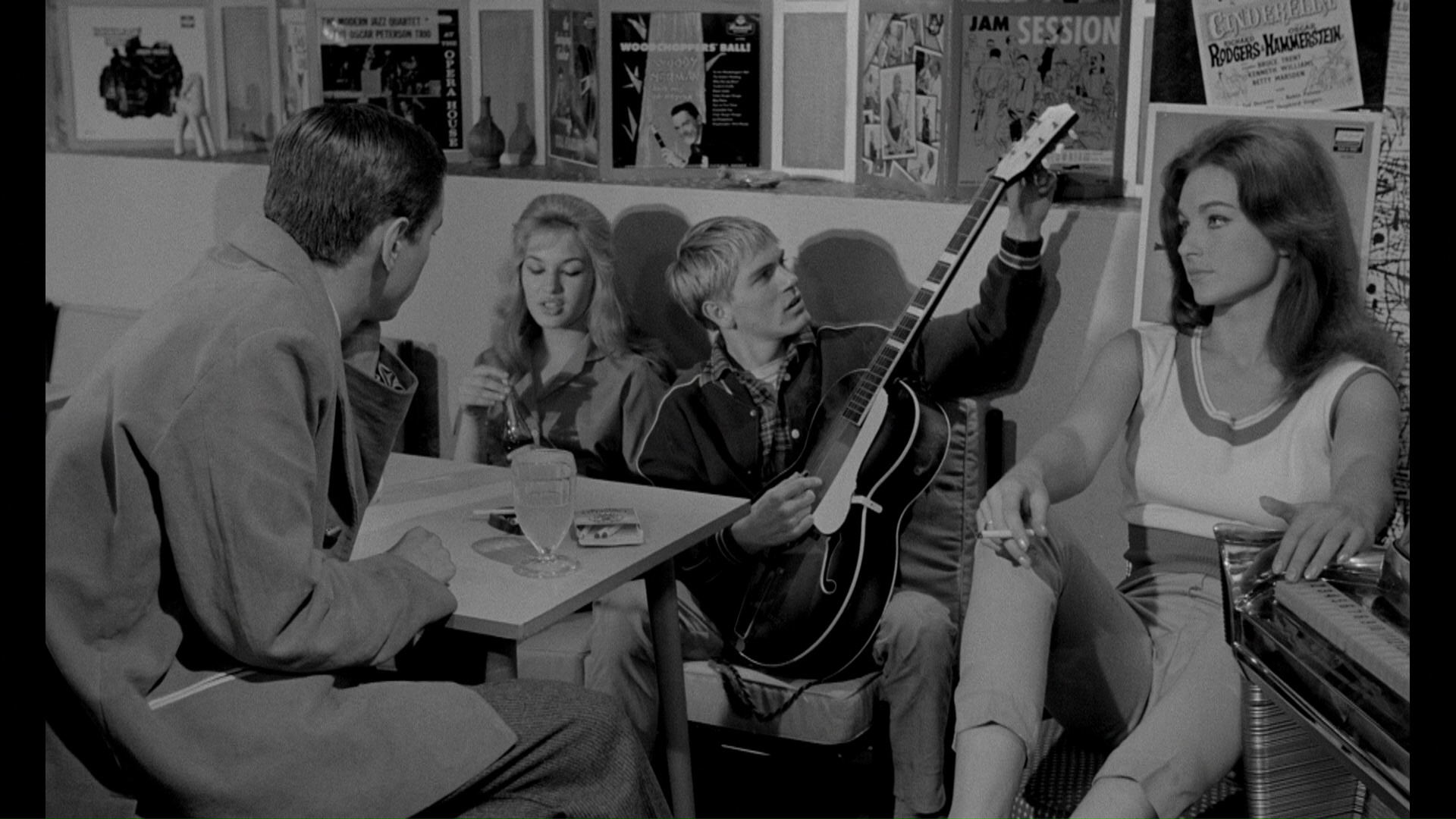 blend of tortured domestic drama and leering exploitation still feels a bit unhealthy, with Hills making for a compelling JD heroine and the rest of the young cast managing to sell their slang-heavy dialogue. Faith was supposed to be the breakout teen star here, but it’s really Reed who steals 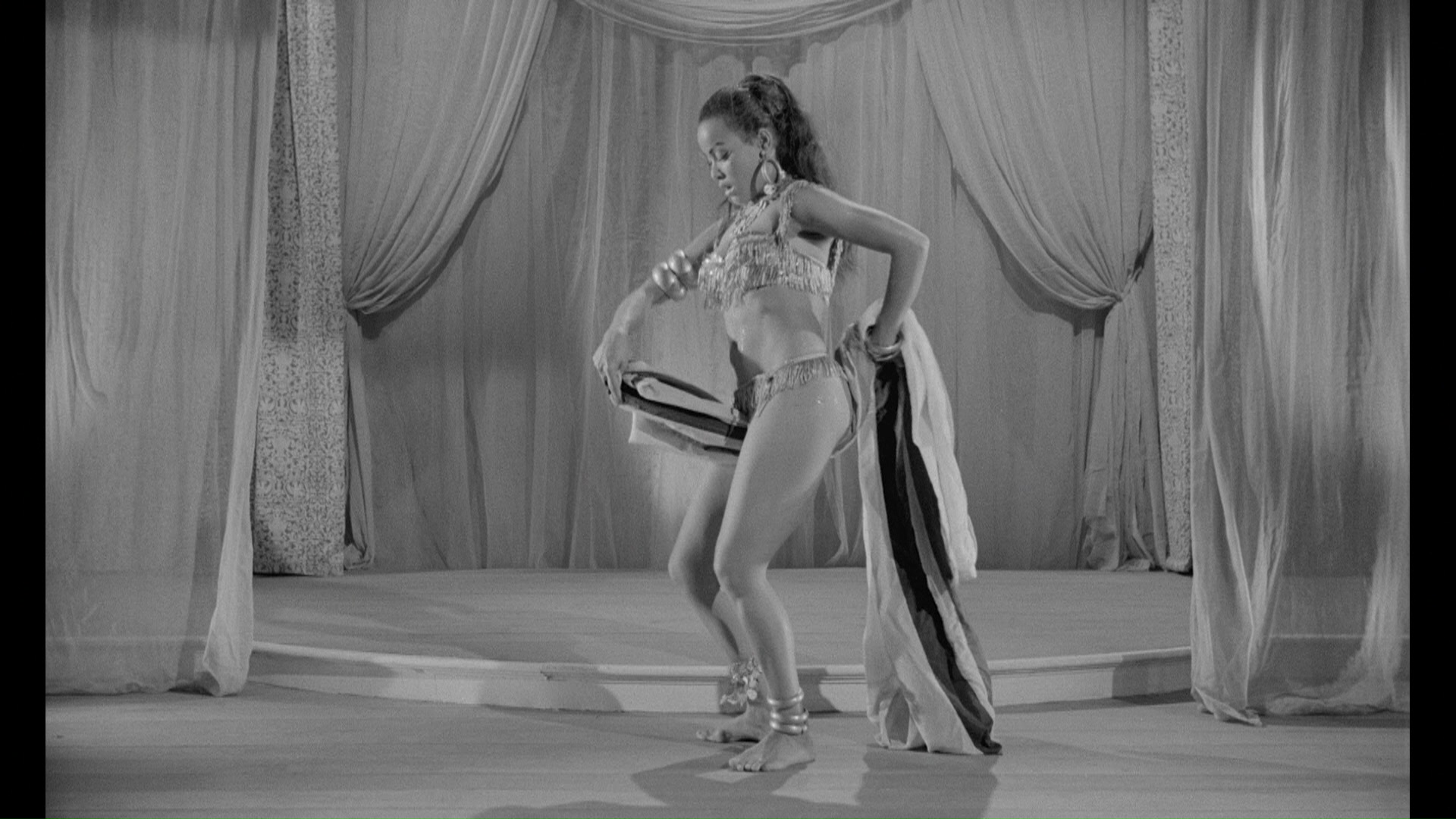 your attention among the supporting cast; it’s no wonder he’d be a major star in a few years. It’s still a lot of fun thanks to the lightning-fast pace and the weird kick of seeing horror star Lee in such a sordid role, but the real knockout here is that score (performed by Barry’s group, The John Barry Seven), which comes roaring out of the gate in the opening frames and gives the film an infectious pulse that still remains effective today.

Like many of its peers, Beat Girl fell into the public domain in the United States and came out in various editions, mostly terrible and usually missing footage. Several bargain basement companies took a stab at it, with the VHS option from Kino offering the most complete and correctly framed option for a long time. However, you're far better off with the 2016 dual-format release from the BFI, which contains a Blu-ray and DVD with nearly identical special features. The default play option here is the 87-minute UK theatrical cut (before it was censored for most local theaters), which features the spiciest striptease numbers (which are about as far as a mainstream UK film could go at the time) and the best overall edit of the film (identical to the one on the Kino VHS in terms of content). It's absolutely beautiful and pristine, blowing away every other muddy version out there by a long shot. The English LPCM mono audio comes from an optical track, apparently the best element that survives, so it's a bit flat and tinny compared to mag track audio but still much cleaner and more robust than other video releases. 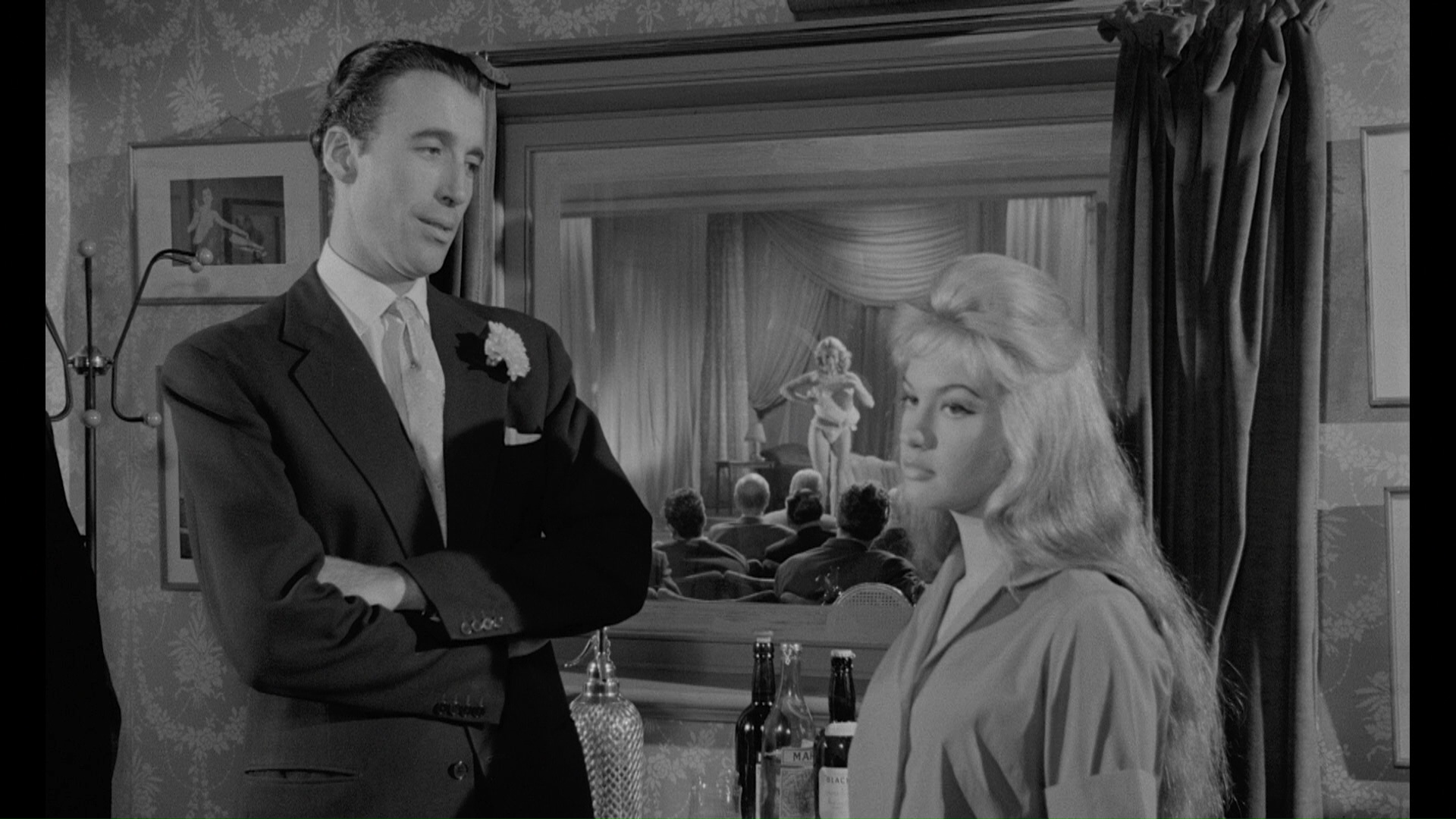 Optional English subtitles are also offered. The 83-minute version shown in US theaters and many UK ones is absent and not missed at all; instead you get an "alternative version" running 92 minutes with softer takes of the strip numbers and some extended material with Farrar and Adam, mainly an early scene with them chatting on a train coming back to England and then conversing some more back at their home. It doesn't really add much to the film, but it's interesting to 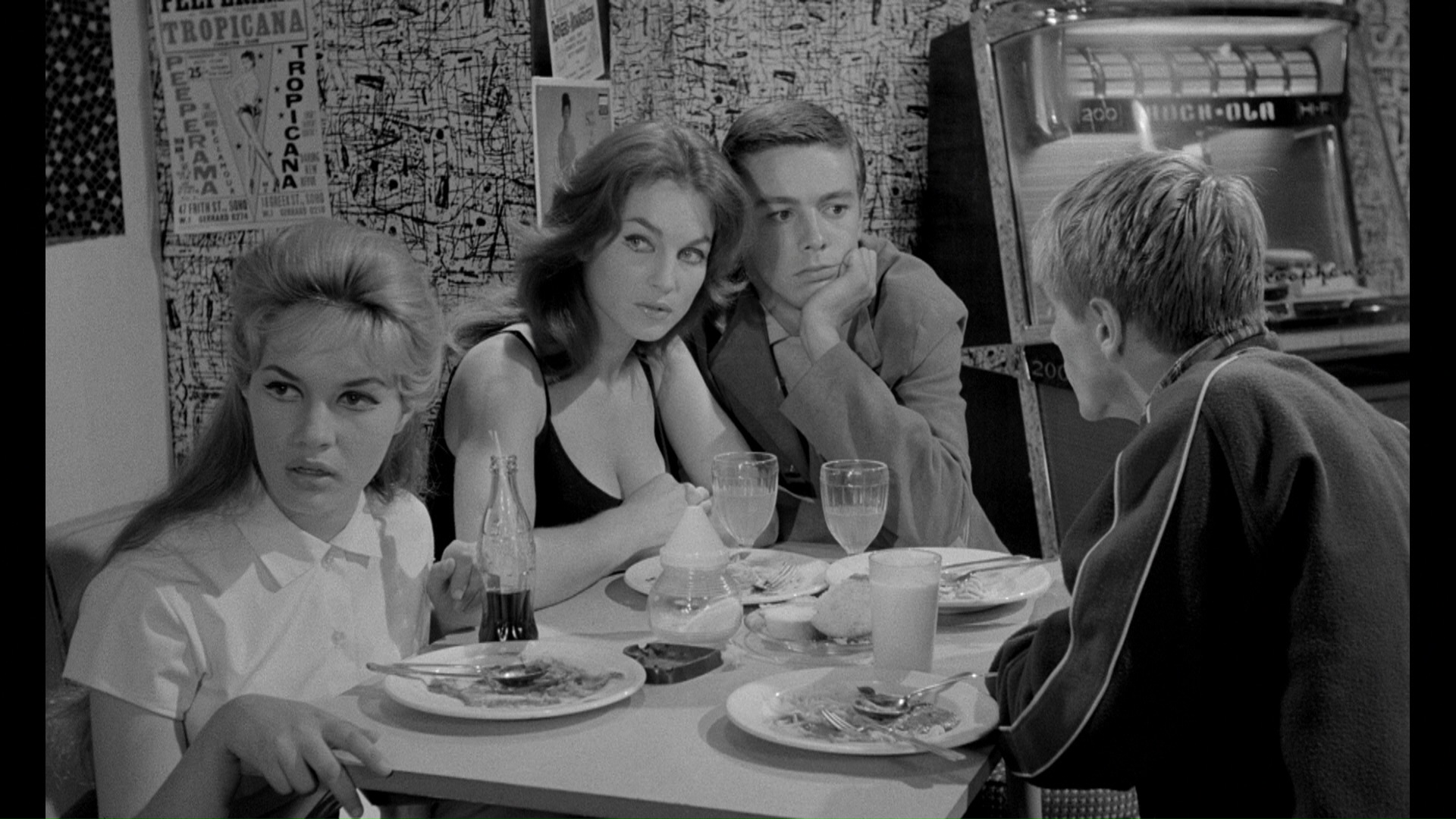 see how the film was extended and toned down for some overseas audiences. This cut is presented in its entirety on the Blu-ray, while the DVD has the extra and alternate bits only as a 3-minute extra. An "extended version" is also included on both discs, apparently cobbled together for a DVD release with the extra parental scenes and the stronger strip numbers (it's also 92 mins.). The extra footage is presented in significantly rougher quality, presumably bumped up from what looks like a VHS or dated Digibeta source.

Now, on to the main extras. The 25-minute "An Interview with Gillian Hills" features the actress reminiscing about being sweet and well mannered despite her screen persona, as well as discussing her fellow actors like Reed (who "stuck out like a sore thumb"), Faith (who was focused on business), and their own wolf pack mentality. The 19-minute John Fitchen short film "Cross-Roads" from 1955 is a really amazing find and possibly reason enough for Christopher Lee fans to snap up this disc. It's a creepy, surprising supernatural thriller about a moody man named Harry Cooper (Lee) haunted by memories of the death of his sister in a car crash on the way to the hospital. He adopts an assumed name and gets close to haughty, lecherous businessman Bernard (Frightmare's Ferdy Mayne), whom he accuses of driving his sister to suicide. From there things get very dark indeed. It's fascinating seeing Lee play brooding horror a few years before he dove headfirst into Hammer monster classics, and the short itself is quite solid with a nicely eerie finale, too. Also included here are two fun burlesque shorts, "Beauty in Brief" and "Goodnight with Sabrina," both from the late '50s and very much in keeping with the tone of the main feature. Also included is a liner notes booklet with additional memories from Hill, plus essays by Vic Pratt,(on the pre-Beatles UK rock scene) Jonny Trunk (a great piece about John Barry's early years), and notes about the extras and a director bio by Jo Botting.