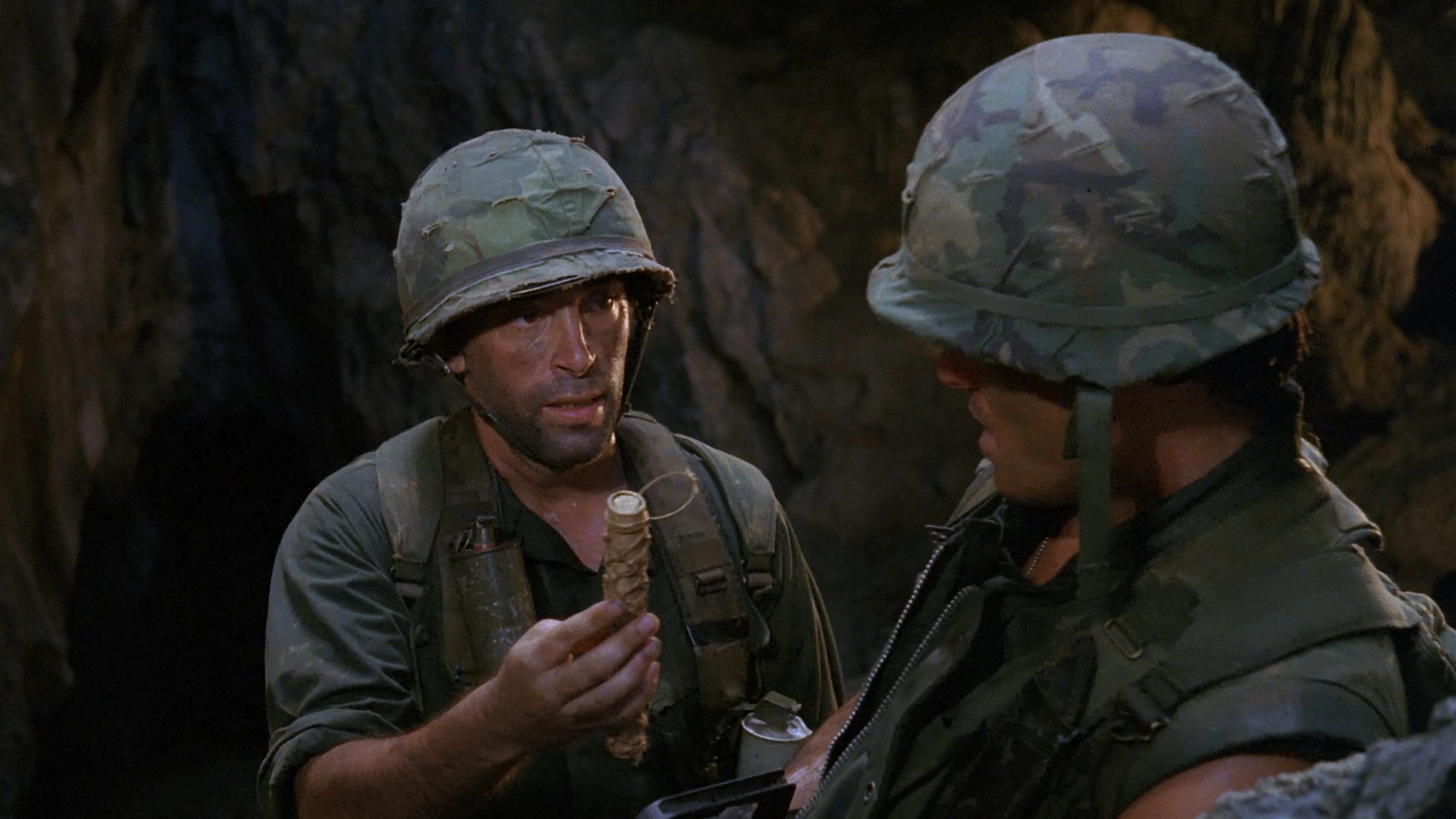 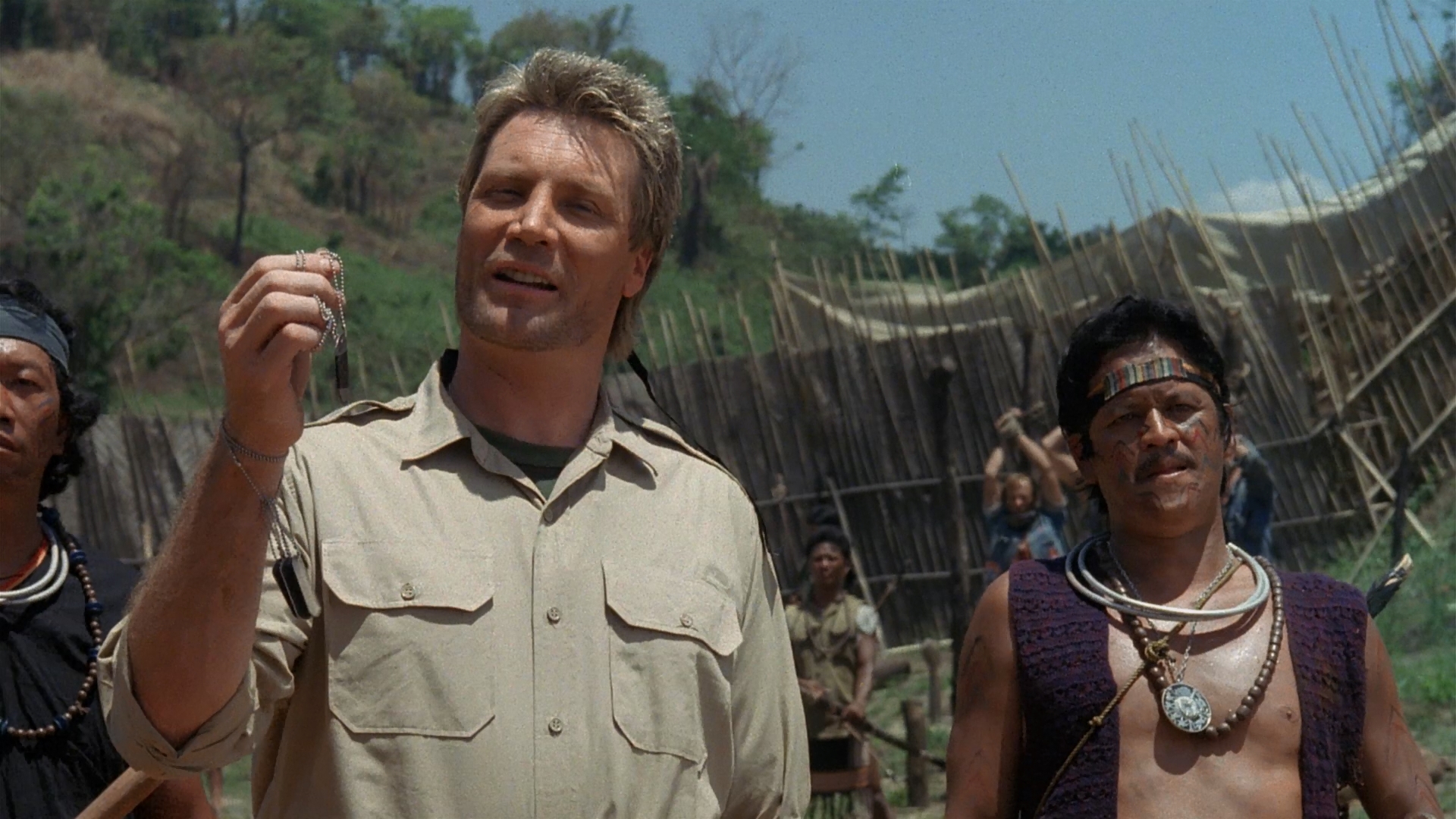 Actor flavors of the month don't last much shorter than Brad Johnson, an Arizona-born thespian who seemed to come out of nowhere when, at the age of 30, the late '80s Marlboro Man was cast as a lead in Steven Spielberg's strained supernatural romance Always in 1989 opposite Richard Dreyfuss and Holly Hunter. That led to another starring role in John Milius's Flight of the Intruder, whose box office failure dropped Johnson into the world of straight-to-video sequels (The Birds II: Land's End), the TV series, Soldier of Fortune, Inc., and a couple of Left Behind films while nurturing a successful luxury estate and ranch business. A perfectly competent actor, he seemed to suffer from too much hype and a streak of bad choices. However, what few people noted at the time was that he'd actually made one film before his big Spielberg break: Nam Angels, another in the string of Filipino action vehicles made during the fruitful, decades-long collaboration between director Cirio H. Santiago and producer/New Horizons honcho Roger Corman.

Basically another riff on Rambo: First Blood Part II but with a crazed twist, our story finds clean-cut American Lieutenant Calhoun (Johnson) tasked with bringing home a couple of P.O.W.s from his regiment who were captured during an ambush by a crazed white mercenary named Chard (The Road Warrior's Wells). Now the missing men are in one of the deepest, darkest, most dangerous areas of Vietnam, so 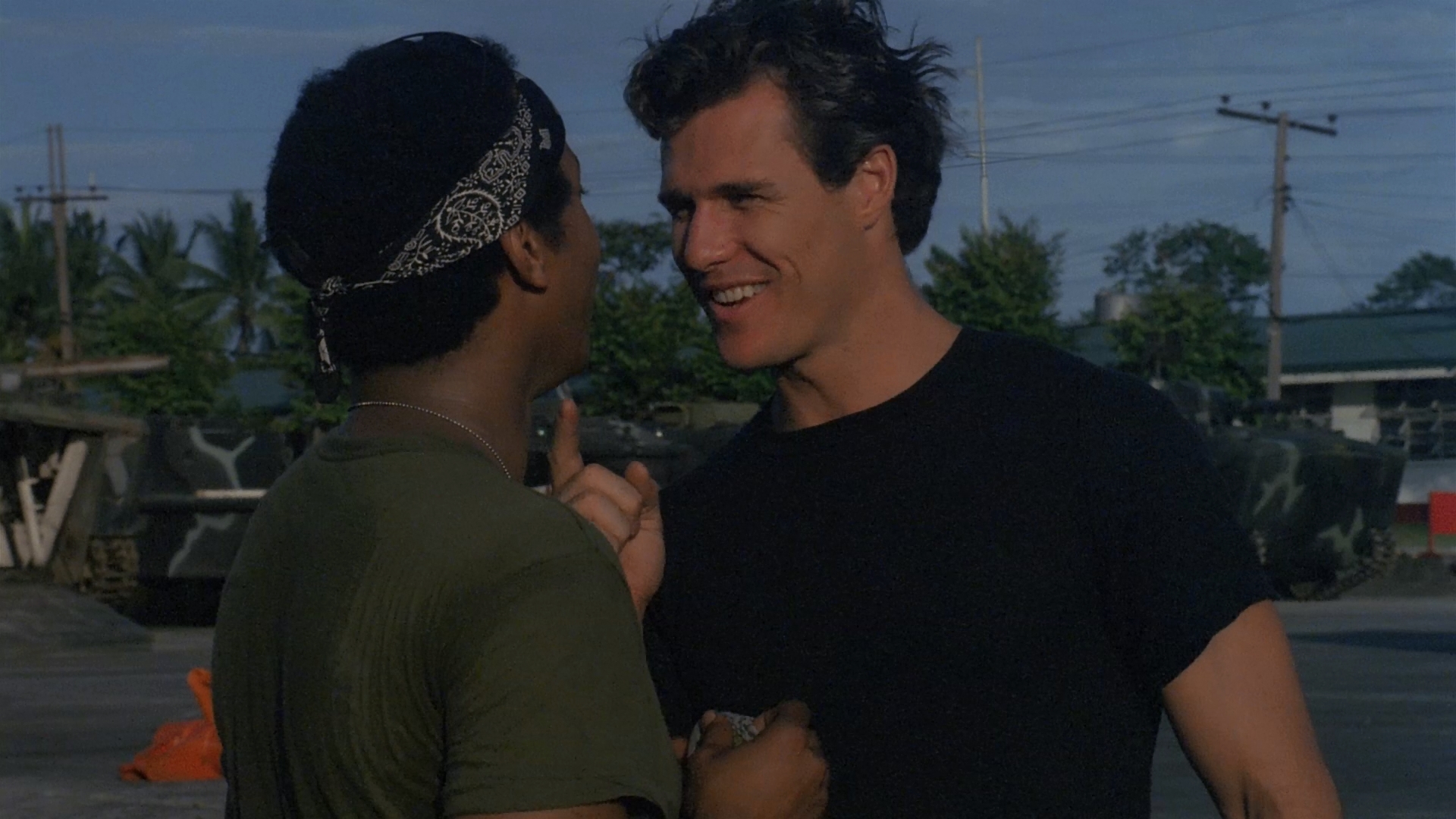 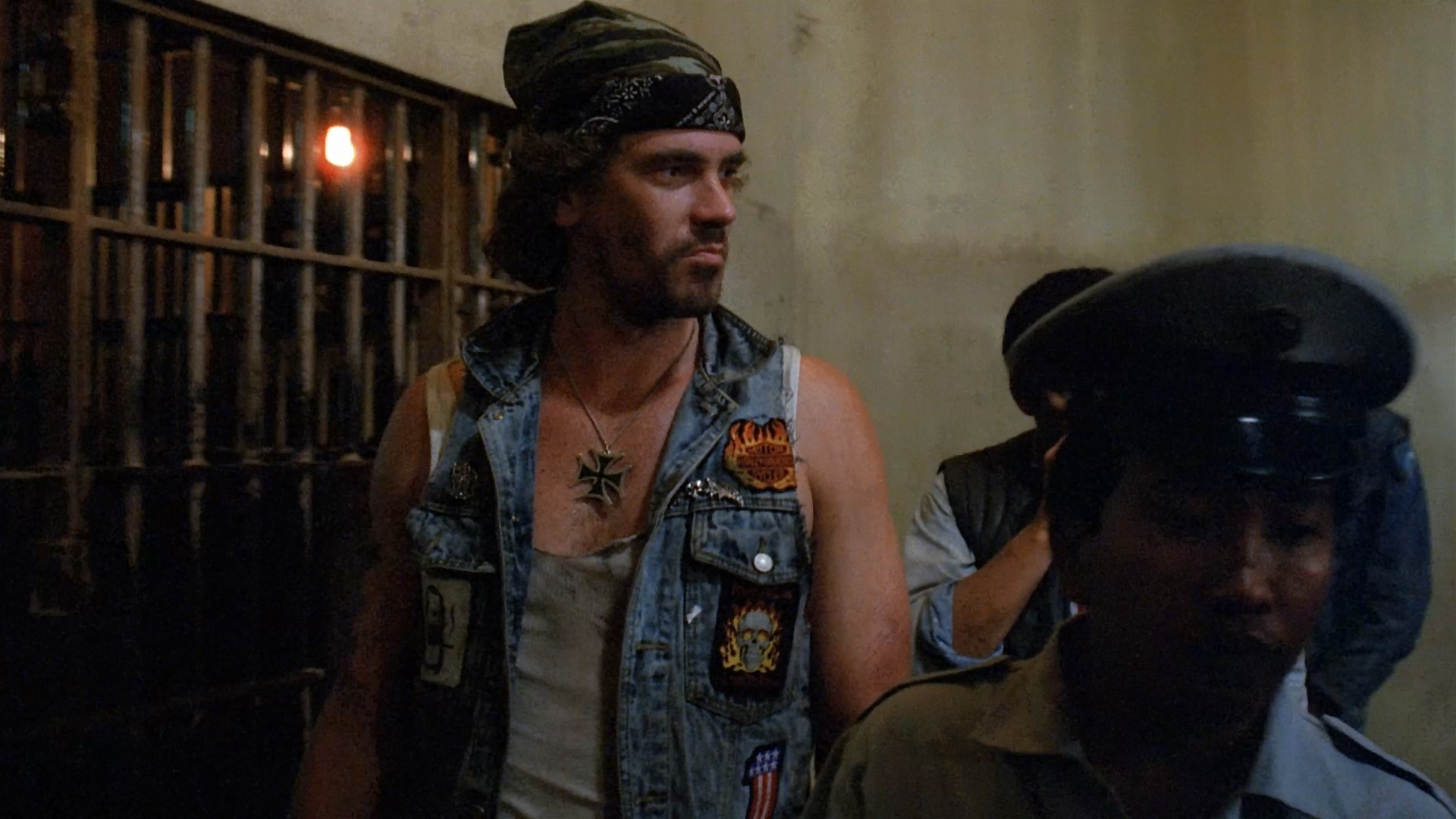 recruits... a bunch of tough bikers called the 1 Percenters recruited in prison after a whorehouse raid to go in and help with the mission, which also involves a stash of gold promised to the bikers if they make it out alive. The area's due to blasted by the U.S. government in a few days, which puts all of them on a timetable that could be impossible.

Loaded with bike stunt and gunfire galore, this is action programming 101 all the way with Santiago pulling out his usual bag of macho tricks to keep things moving. The real masterstroke here was probably casting grizzled Aussie Wells as the bad guy; the always reliable character actor (also seen in Commando, Fortress, and Weird Science) never fails to bring it even in his cheapest, shoddiest projects (many are much, much lower than this), and he clearly enjoys chewing the scenery here and showing off his rad ponytail. The plot is exactly what you'd expect and cribs not so subtly from Jack Starrett's 1970 Nam/biker Filipino-shot The Losers, but the very late '80s ambience (complete with inappropriate haircuts and a droning, typically New Horizons cheapie synth score) gives it a very different feeling from the '70s drive-in films it so obviously apes. In short, it's a great guy movie from the height of the cable era and delivers exactly what you'd hope.

For some reason this film fell into deep obscurity after its initial circulation on VHS in 1989 (including an American edition from Media), but Code Red brings it to Blu-ray with a solid edition featuring a much-needed new widescreen transfer that improves in 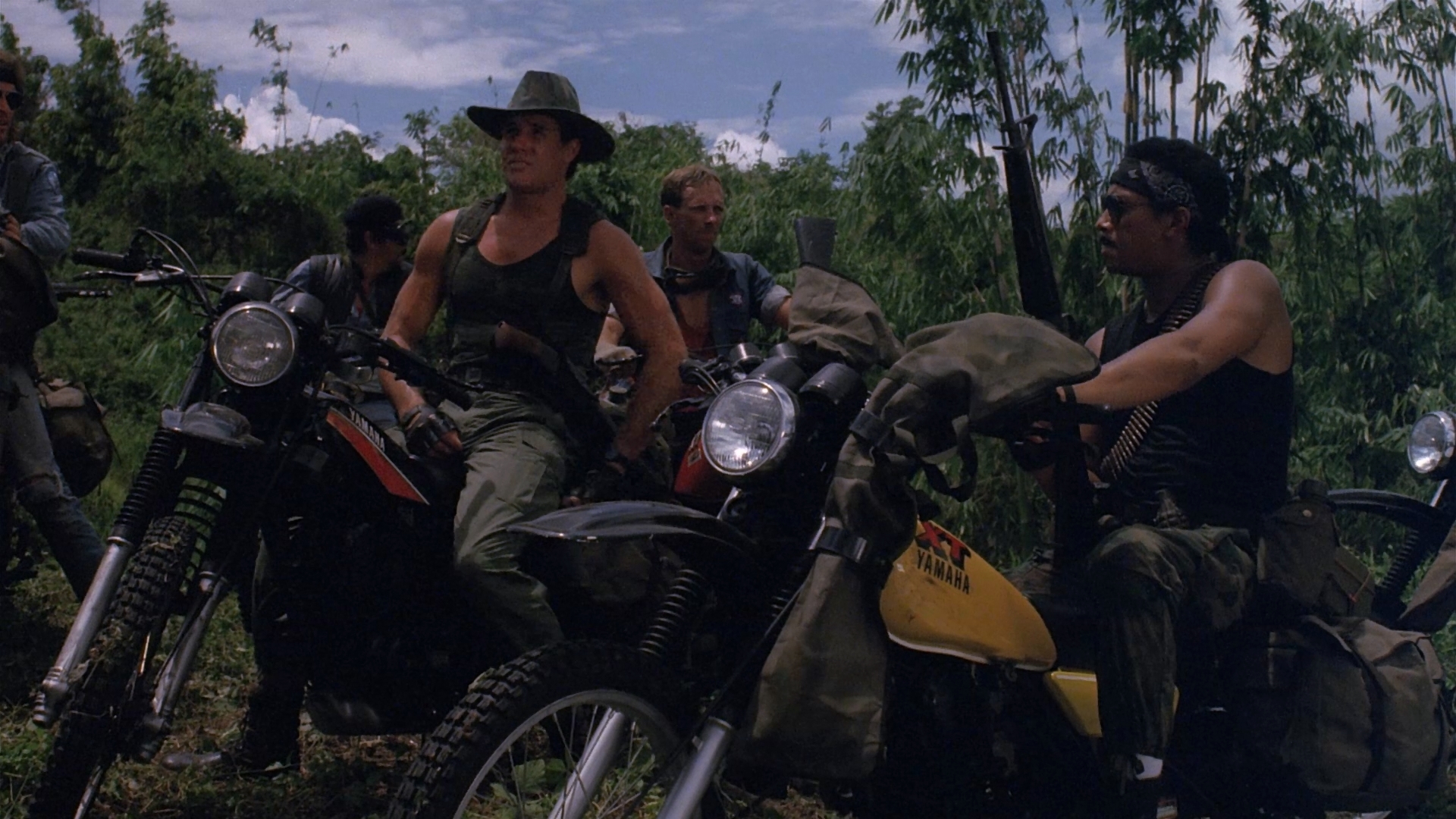 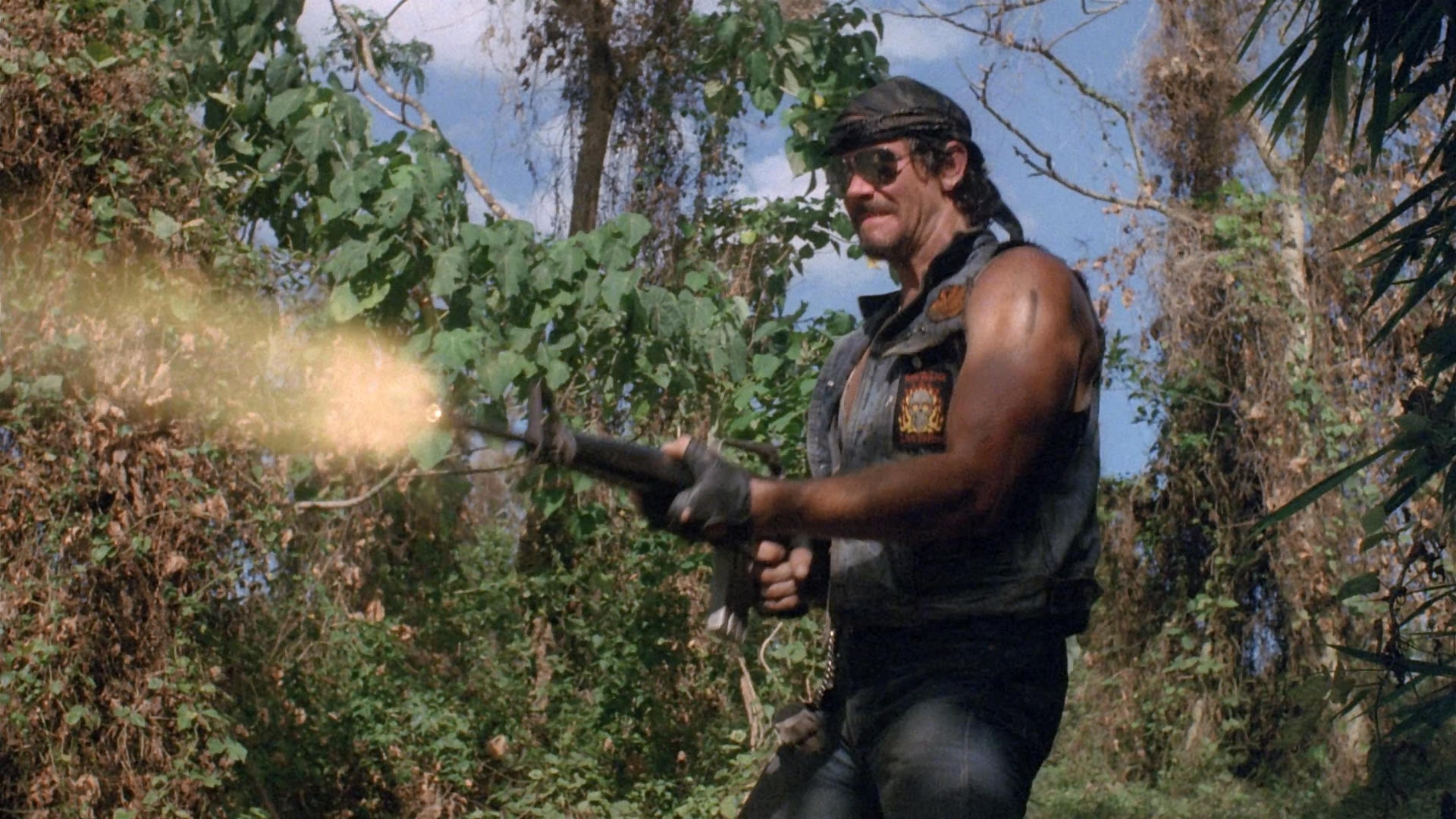 way over what we've had before. If you've seen the label's other Corman-owned Santiago titles you'll have some idea of what to expect as it still looks like pretty mediocre film stock, but the colors are great, the detail in the greenery is nicely delivered, and it's a nice consolation considering the fact this was barely given any kind of a legitimate theatrical release. It's also the uncut 93-minute version versus the more common 82-minute one prepared by Corman with abbreviated credits and a truncated opening. The DTS-HD MA English stereo audio sounds fine as well given that the only thing that'll test your speakers is the occasional explosion and that nutty theme song at the half-hour mark. The main extra here is a new 21-minute interview with Wells, who chats about getting into a "fun" three-picture deal with Santiago in Manila, his friendship with the filmmaker, and a number of his other film credits including a bizarre digression about his pigeonholing as a gay leather villain after two of his more famous '80s roles. Even stranger is a brief intro to the film with Wells and the label's banana man, which won't be spoiled here. Regular hostess Katarina Leigh Waters hosts the disc with an optional intro and closing segments, riding a chopper and showing off a skintight black outfit as she rattles off the significant credits and trivia items for all of the major players. Also included are the theatrical trailer and bonus ones for The Devastator, Cocaine Wars, The Jigsaw Murders, Nightfall, and Equalizer 2000. 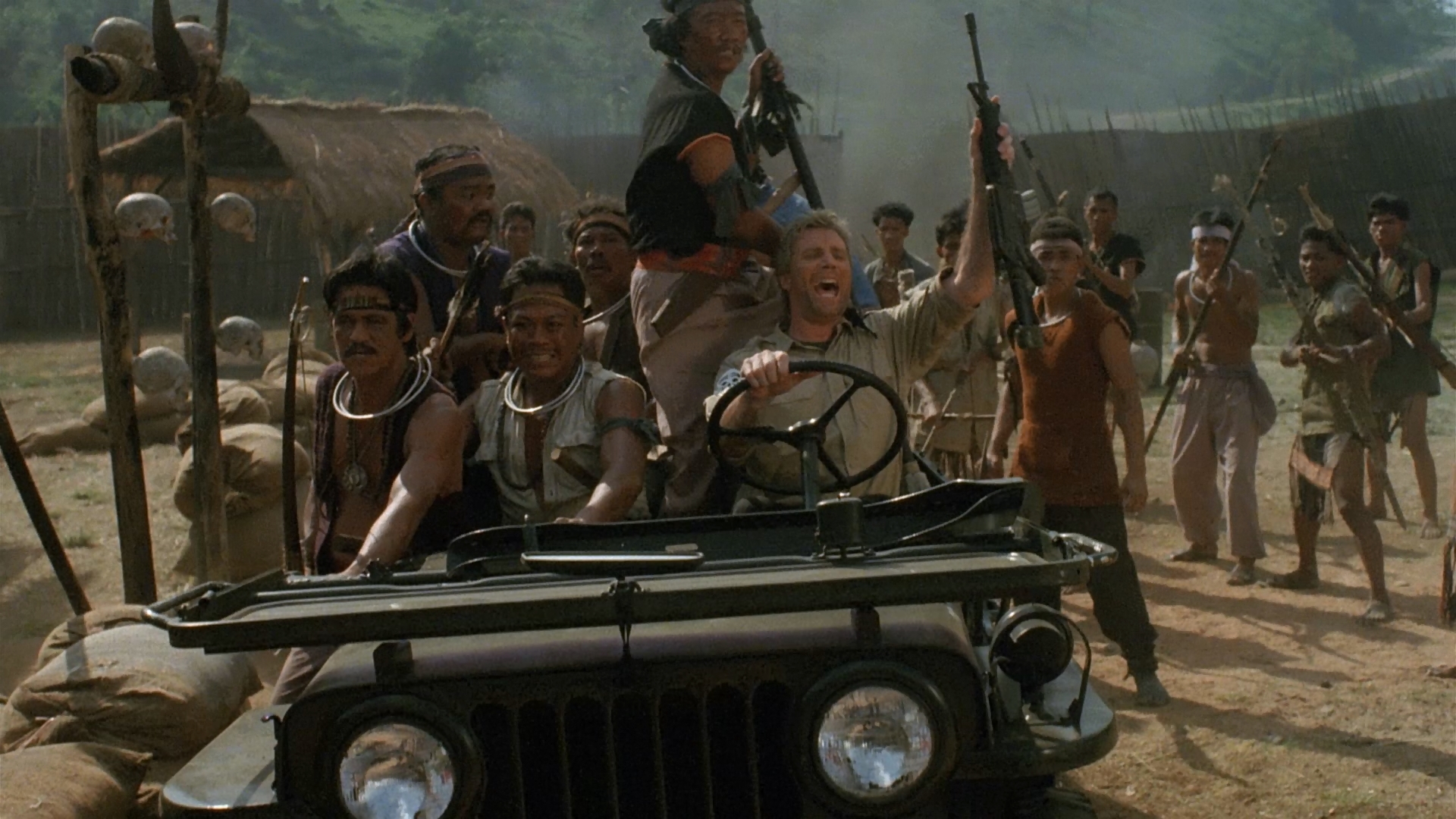 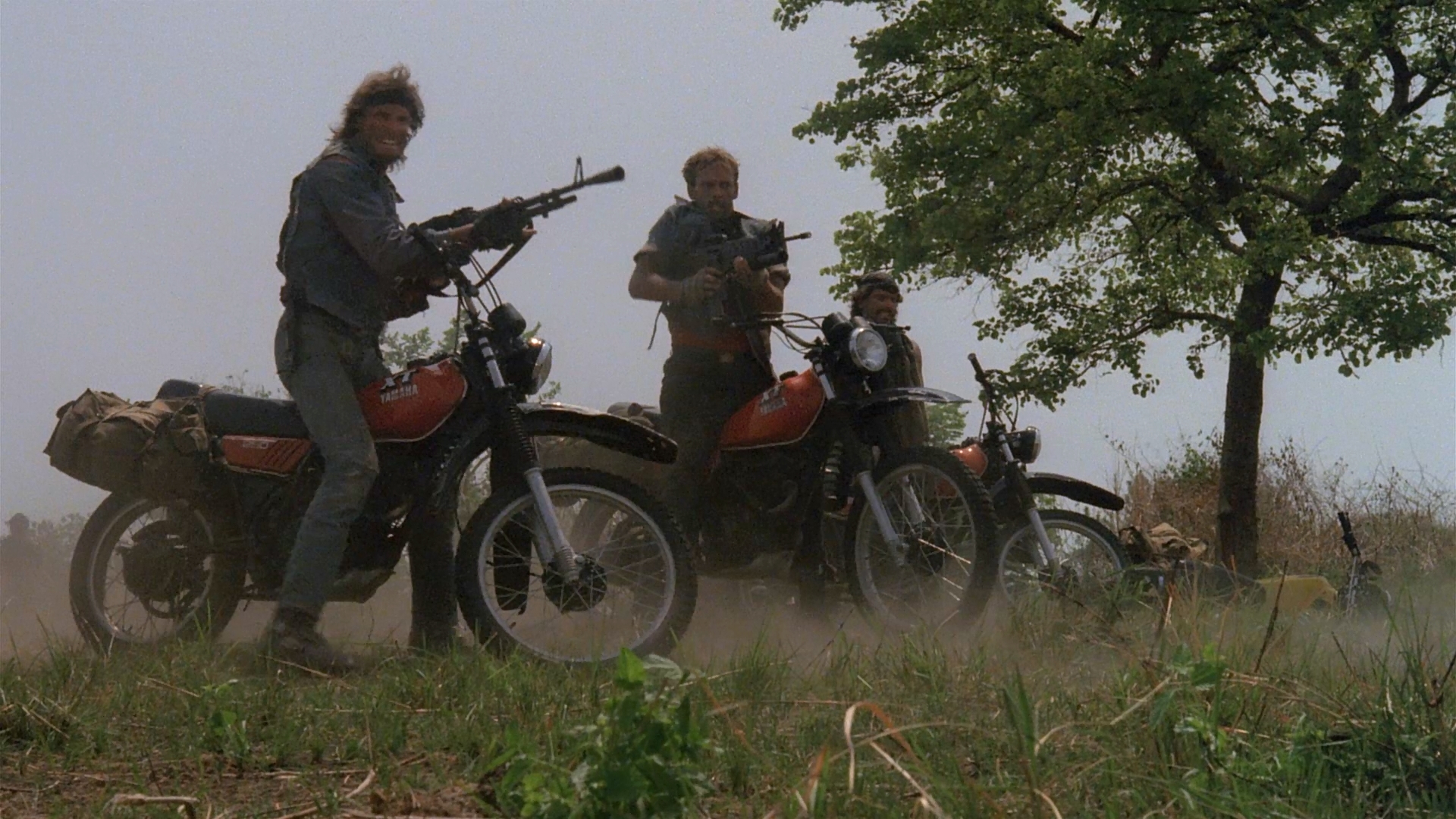 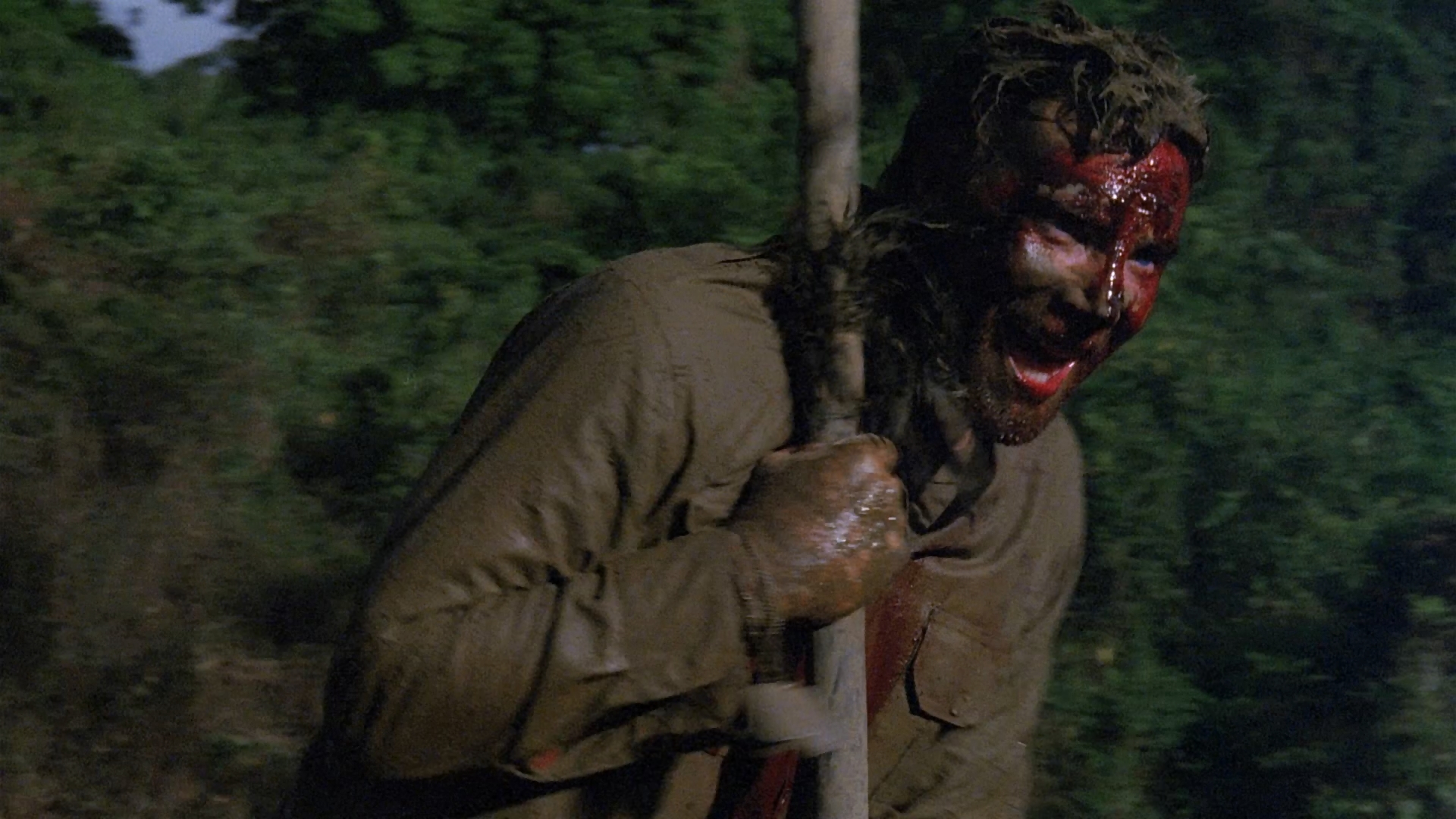 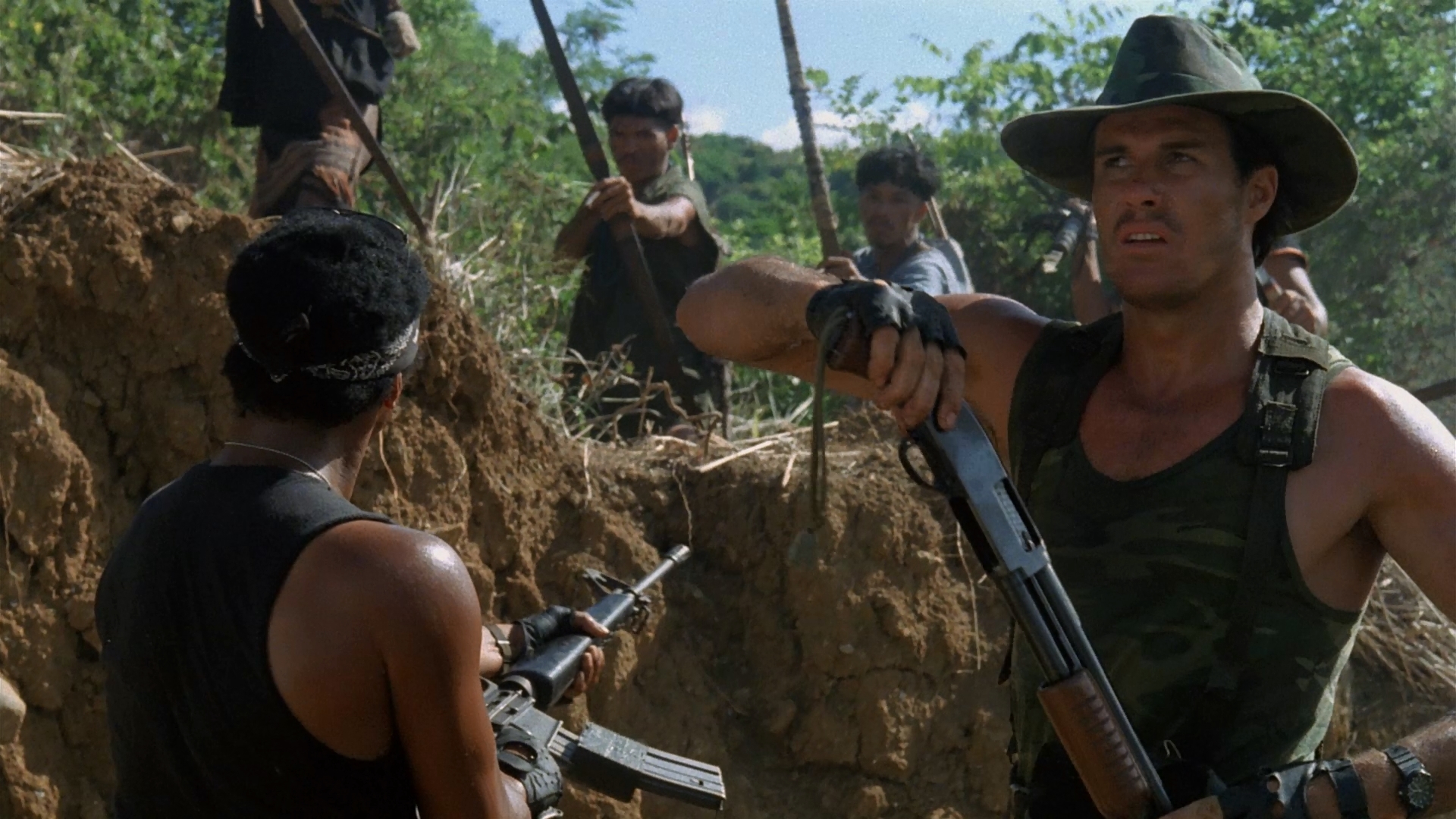