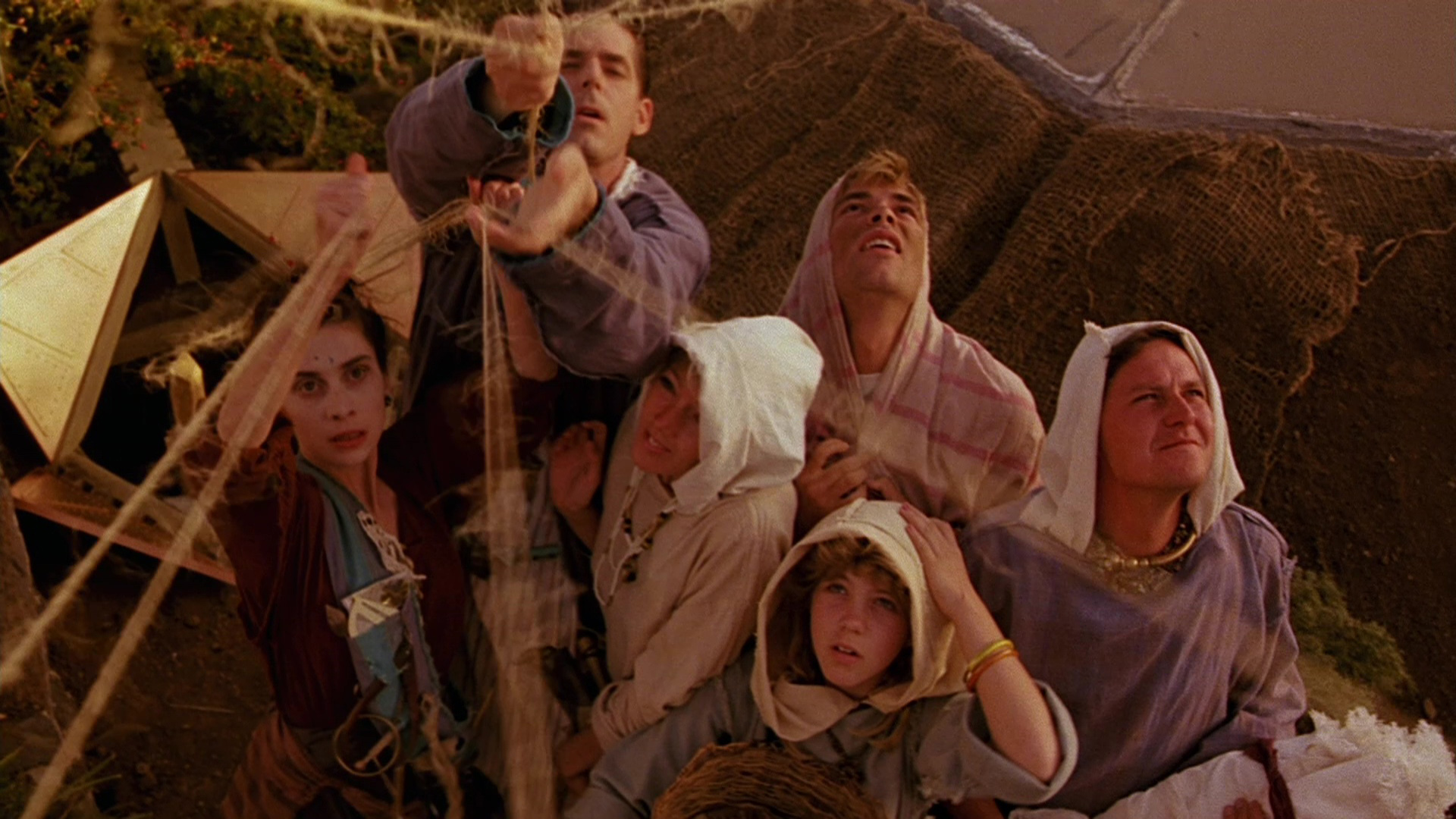 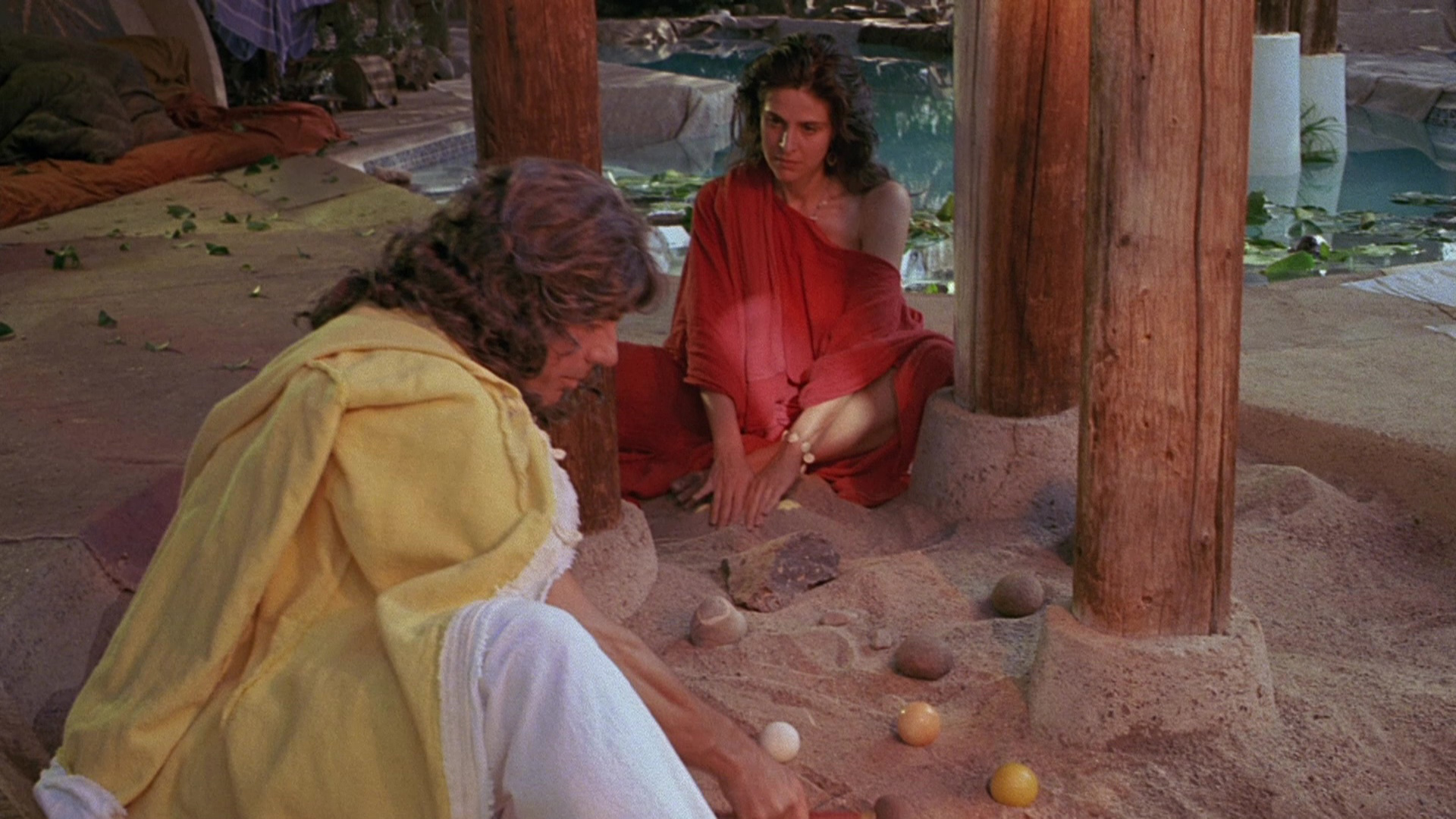 In 1941, a teenaged Isaac Asimov published one of his earliest key works, a novella called Nightfall about the effects of a massive change in perception on a remote society on a distant planet. Highly influential and acclaimed, it has most recently inspired the film Pitch Black and its sequels as well as legions of science fiction writers. Incredibly, no one attempted to actually film it until 1988 when Julie Corman snapped up the rights for a production to be shot in the Arizona desert. Brought in to write and direct was Paul Mayersberg, who wrote the screenplay for The Man Who Fell to Earth, Eureka, Croupier, and Merry Christmas, Mr. Lawrence. However, anyone familiar with late '80s releases from Roger Corman's New Concorde should have a fair idea of how things turned out.

On a remote planet with multiple suns, daylight is constant and rumors of rare instances of nightfall are enough to send the leaders into a panic. Believing that society collapses each time darkness falls, the people look for guidance to their greatest scientist, Aton (Birney, wearing a truly terrible wig), whose efforts to gain insight are thwarted by both the physical temptation of Ana (Millian) and the religious 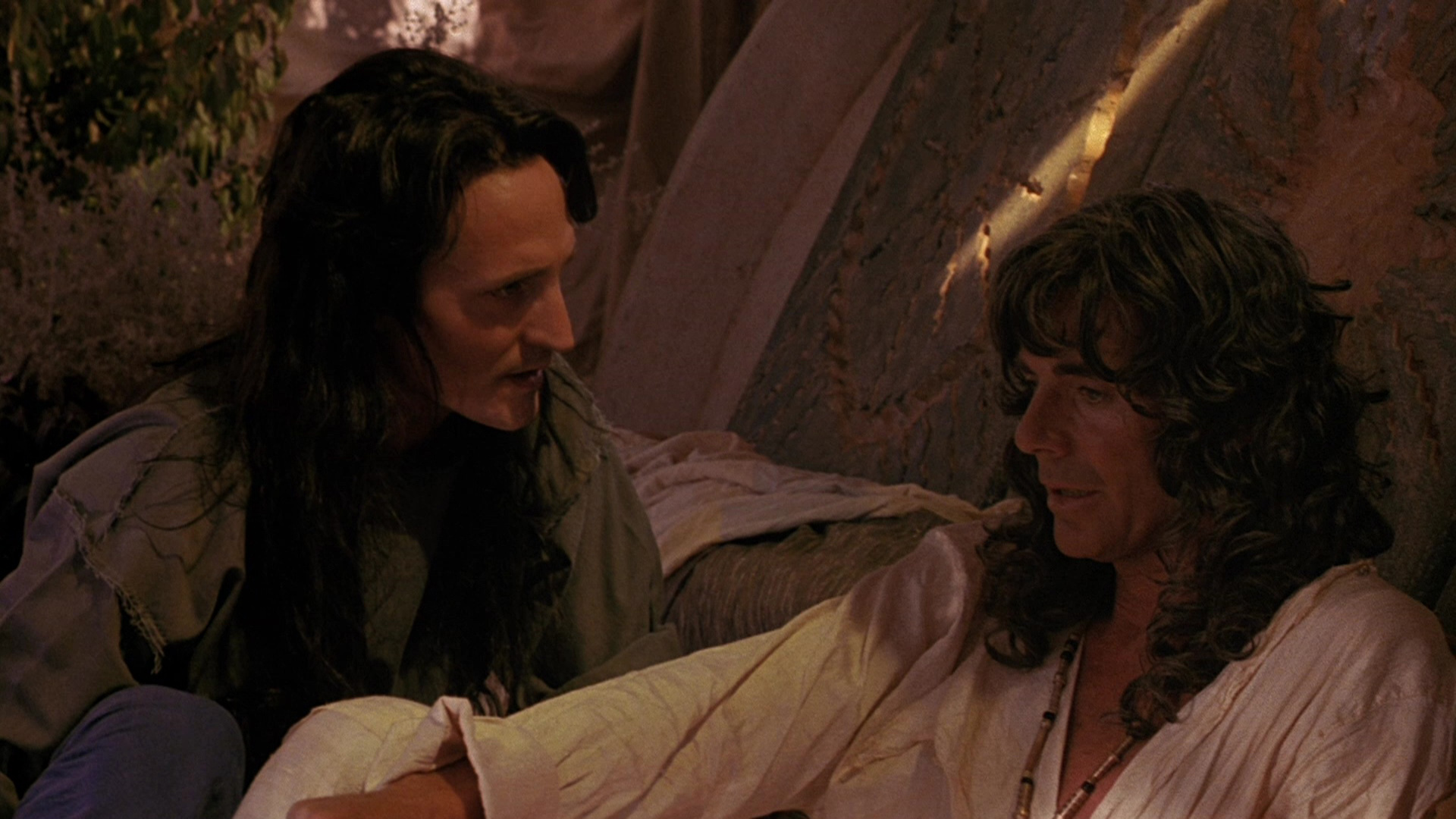 fervor of zealot Sor (Kanner), who recruits Aton's wife Roa (Douglas) just in time to strap her down and have her eyes pecked out by a falcon to become a new mystical co-leader. Everyone talks and talks as the inevitable darkness approaches, which was cause a permanent shift in their society.

Shot for a ridiculously tiny amount of money for such an ambitious project, this film is primarily notable for being filmed at the Arcosanti experimental town, which gives the film a distinct look and a feeling far more like a trippy art film than a standard sci-fi feature. Douglas is magnetic and photogenic as always while the scenery-chewing Kenner makes the most of his script, but there's no denying that having Birney at the center is a major problem. With all the charisma of a dishcloth, he seems intent on getting through his lines and enjoying some nookie time with Millian rather than committing to his character's curious nature. It also fumbles as an adaptation, sticking with the actual revelation at the end of the story but entirely altering its meaning and implications. On top of that it has that pokey, droning quality found in several New Concorde films around the period, most notably the remake of Masque of the Red Death, with the chintzy, sleep-inducing score by Frank Serafine doing it few favors. At least future Hollywood studio cinematographer Dariusz Wolski (Prometheus, The Martian) gives it all a beautiful visual sheen for its budget, making inventive use of color and sunlight throughout. 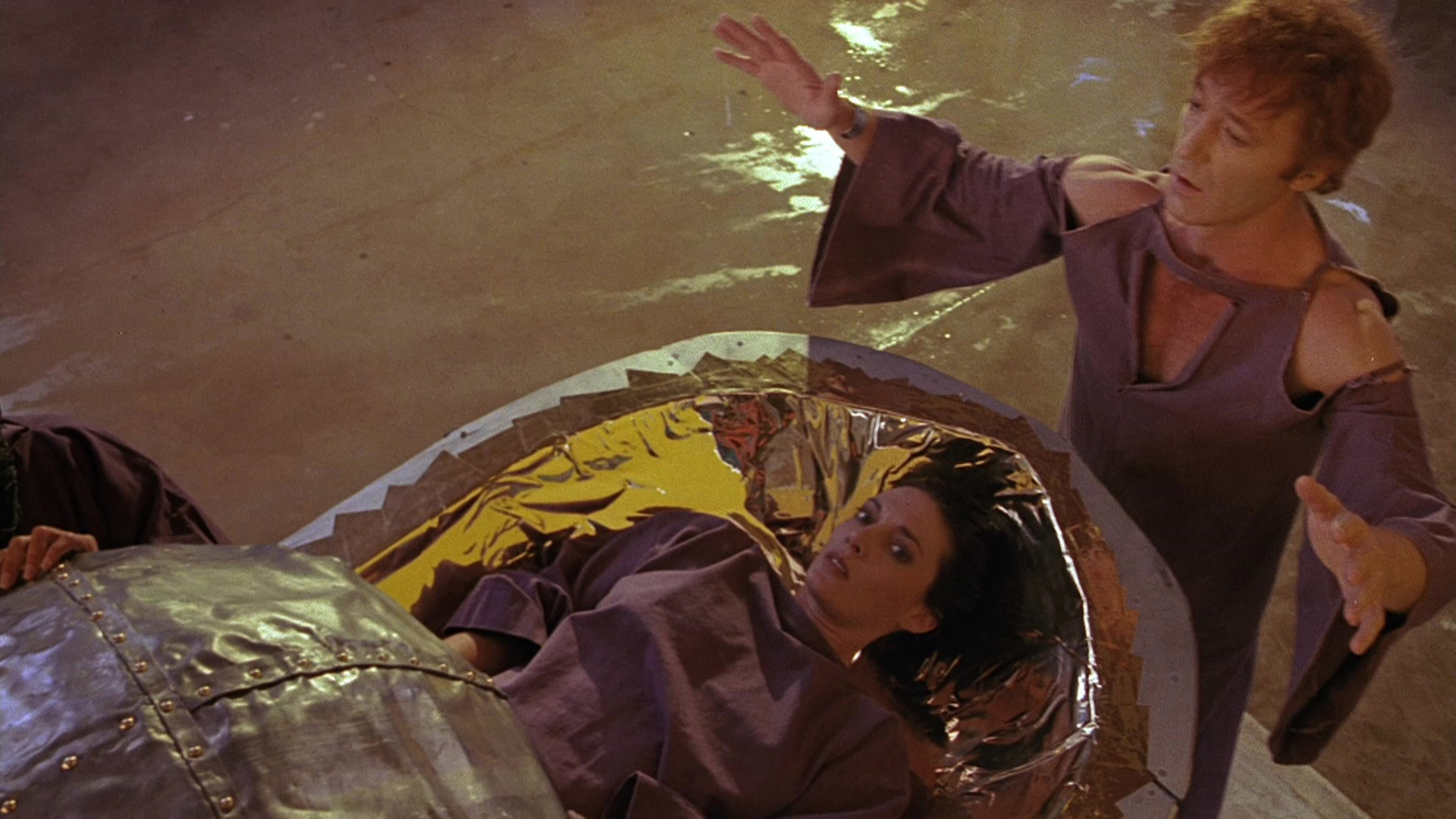 Nightfall received a wider than average theatrical opening from Concorde Pictures in 1988, with a VHS edition following soon after 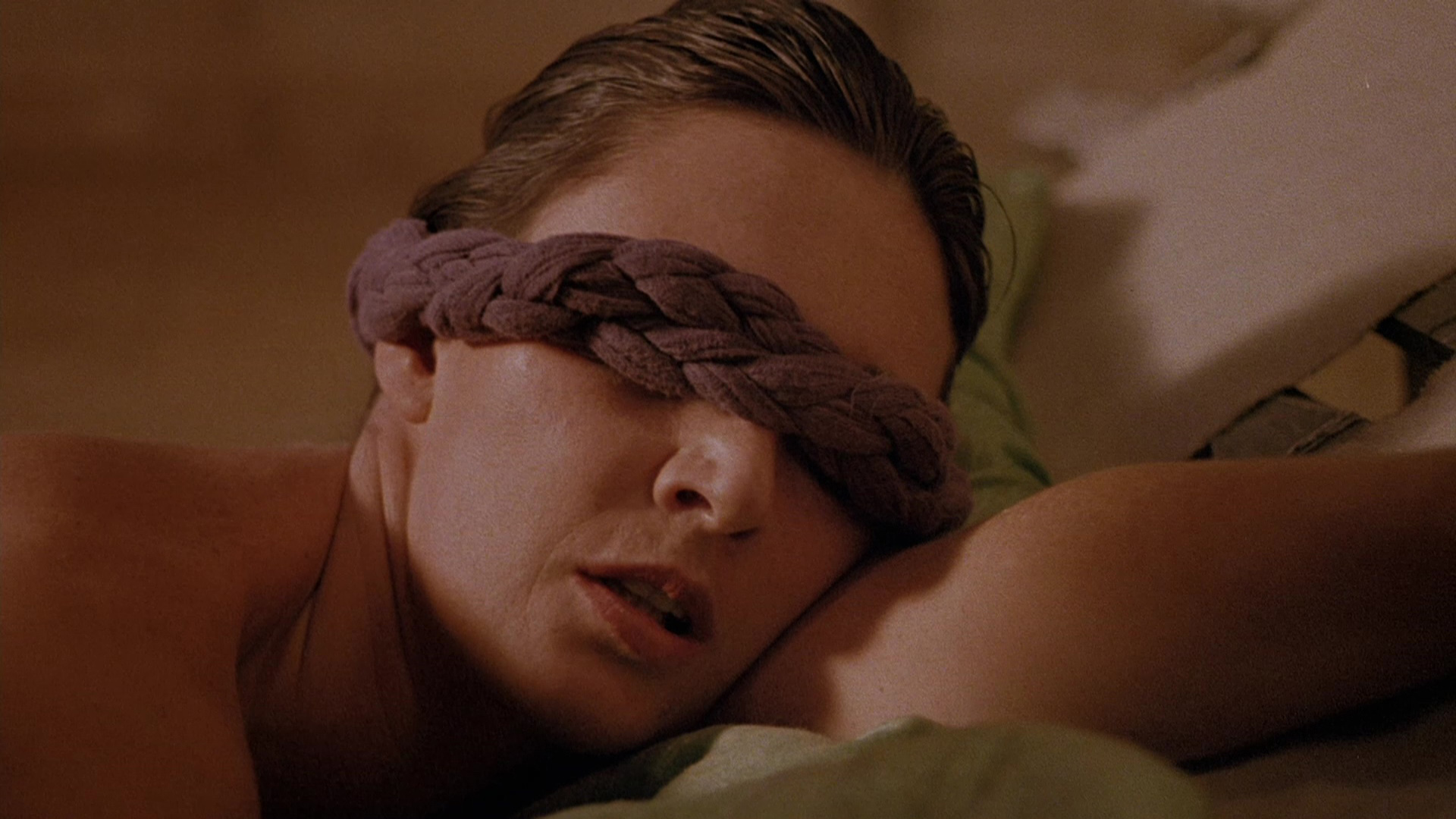 from MGM/UA. After that it essentially dropped off the face of the earth until a 2016 Blu-ray edition from Code Red, sporting a new HD transfer from an interpositive and some useful special features. The transfer looks great (apart from some unavoidable dirty opticals during the credits) and handles the tricky color palette far better than the very muddy VHS edition, while the restored 1.78:1 framing gives it a bti more visual polish than before. The DTS-HD MA English stereo track does what it can with that incredibly boring sound mix. The film can be played in "Katarina's Drive-In Theatre" mode with hostess Katarina Leigh Waters camping it up in a priestess outfit and offering trivia about the cast and crew, poking fun (with Mr. Pickles) at that whole eye-pecking business. Julie Corman turns up for a new 7-minute interview featurette, openly addressing the film's biggest failing (an inexperienced director with only one small, little-seen film under his belt) and chatting about the process of getting the rights to the story from Asimov. Interestingly, he declined to write the screenplay since he considered the story far, far behind him, but he and Robert Silverberg published it as an expanded novel in 1990. (On top of that, Roger Corman cashed in with an even cheaper version with David Carradine in 2000.) A very funny, engaging interview with Sarah Douglas (33 mins.) is actually the best thing on the disc and virtually reason enough to pick it up for this alone. She's full of great stories about this film (including the rains that made the desert shoot difficult at first and her fear of having a bird peck millimeters away from her eyes) and several other projects, noting that she only has regrets about two films (which she remains unnamed). Also included are the theatrical trailer and bonus ones for Mutant, Kingdom of the Spiders, Nam Angels, Acapulco Gold, and Running Scared.