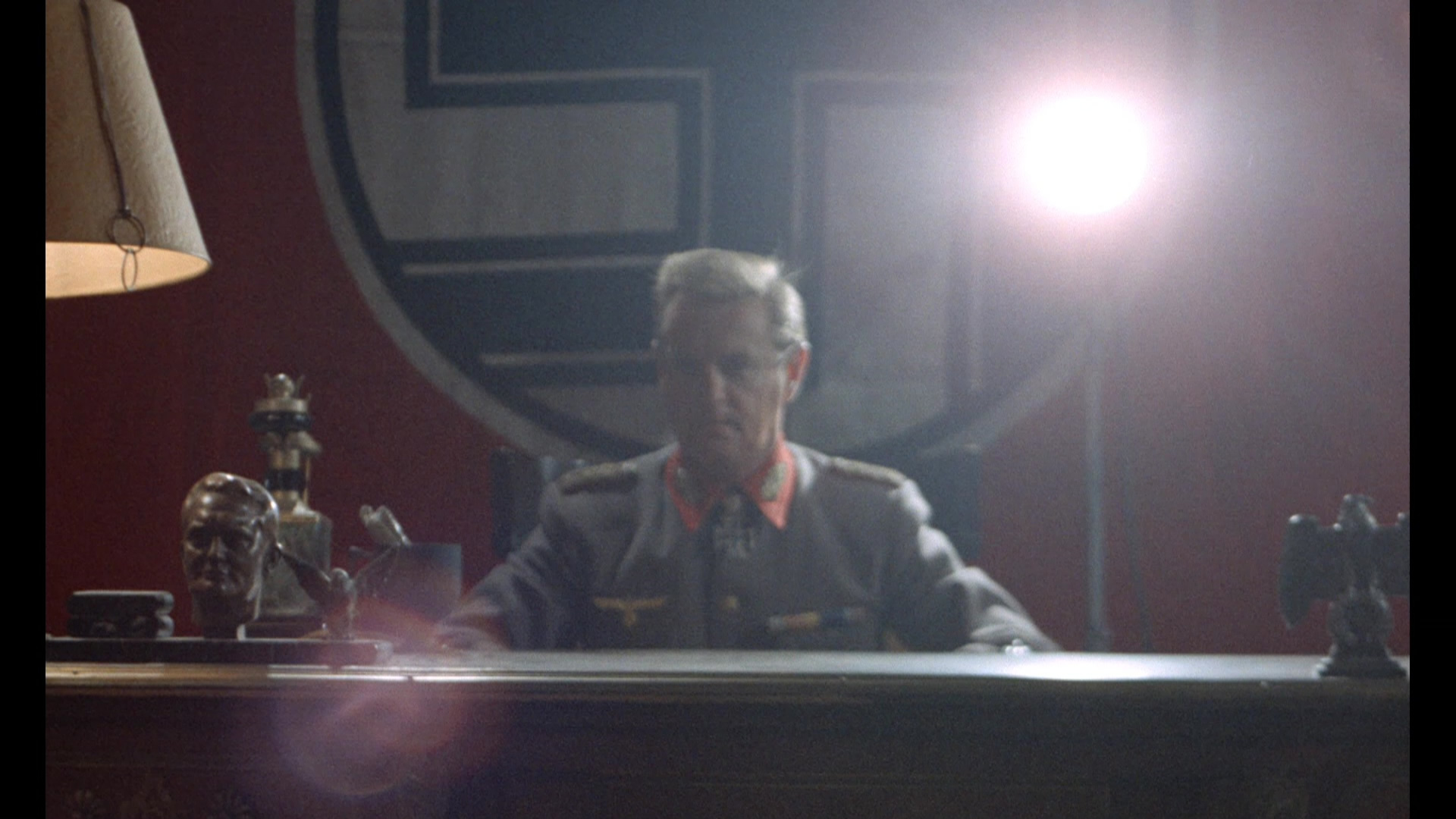 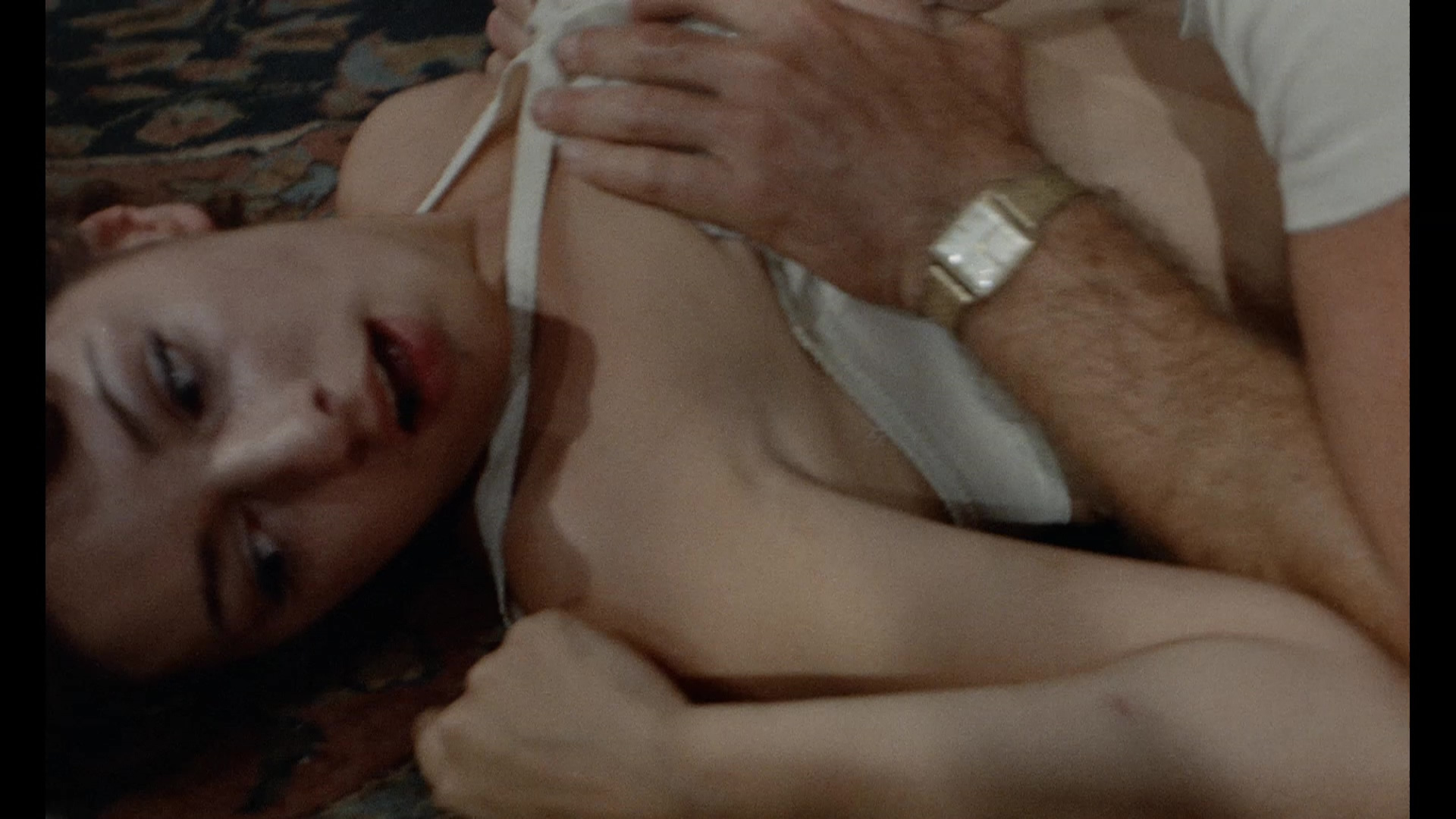 Patient zero for the wave of Nazi sexploitation films that flooded theaters throughout the 1970s, this grubby drive-in shocker isn’t as grisly or extreme as some of its European successors but still holds a firm place in the history of trash cinema. Most obviously it represents an outrageous collision of three major names from the golden era of sexploitation with director and cinematographer Lee Frost (who started off with House on Bare Mountain and The Defilers before moving on to everything from The Thing with Two Heads to the insane hardcore offering A Climax of Blue Power), writer, producer and star Bob Cresse (who cooked up Mondo Freudo and Hot Spur among many others), and legendary producer David F. Friedman (who produced the H.G. Lewis blood trilogy along with She Freak, Trader Hornee, and plenty more), who also pops up here as an SS officer.

It’s very obvious from both this film’s plot and overall look that it’s riffing on the popular TV sitcom Hogan’s Heroes, which was still on the air at the time and somehow managed to make a palatable American comedy about prisoners of war running circles around their Nazi overseers during World War II.  Of course, this one throws that whole concept straight into the gutter as it opens with a couple of guys chatting about the Axis defeat before one of them decides to share an unbelievable anecdote about how the Nazis were undermined by a couple of undercover female operatives. These two brave WACs (Dracula vs. Frankenstein's Lease and The Ramrodder's Williams) agree to pose as Jewish female prisoners of war who have been sent to the title concentration camp, 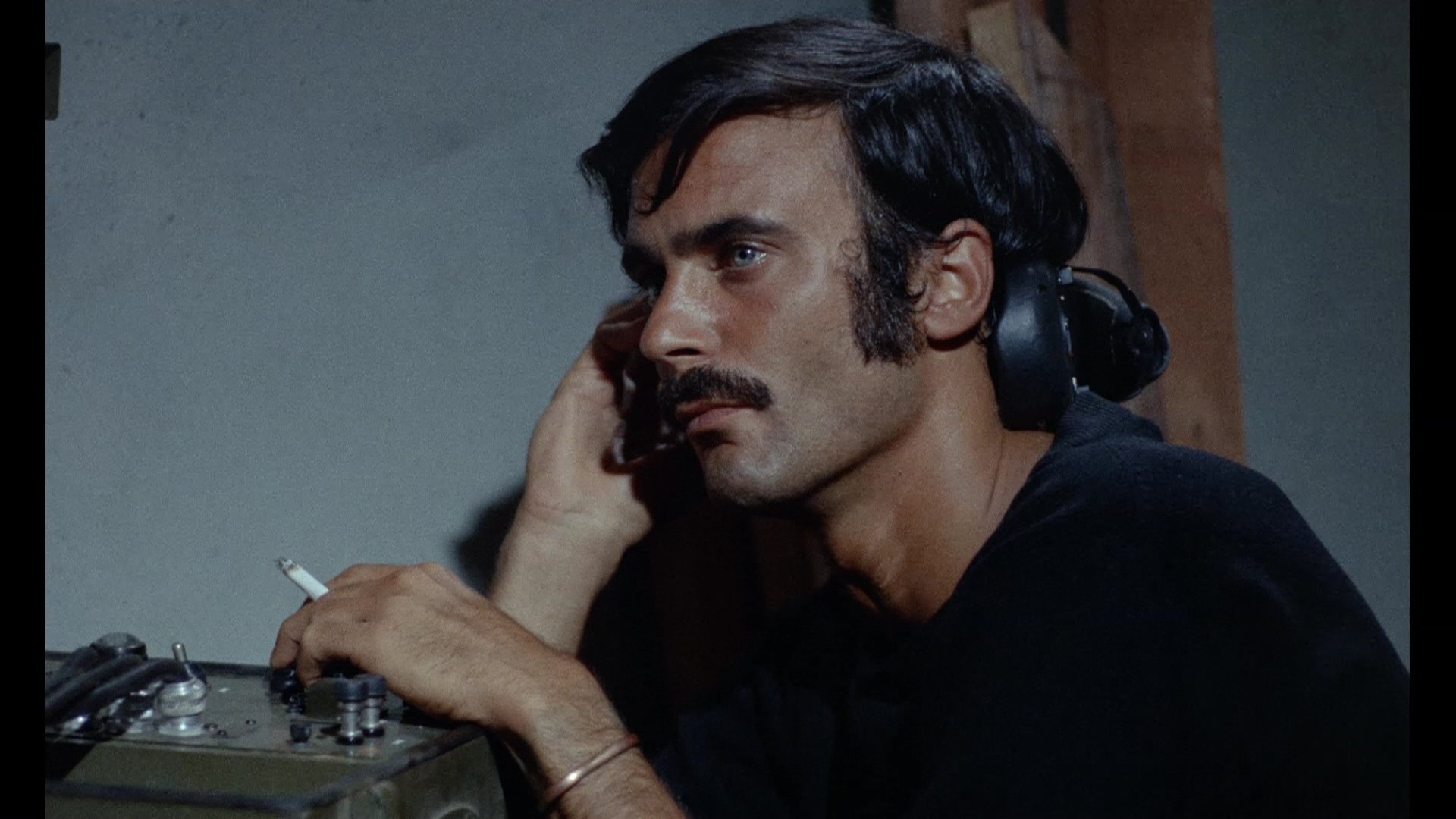 a degrading brothel for the sexual gratification of German commanders and officers. At first the new female arrivals are put at ease by promises of keeping them comfortable, including an examination by a 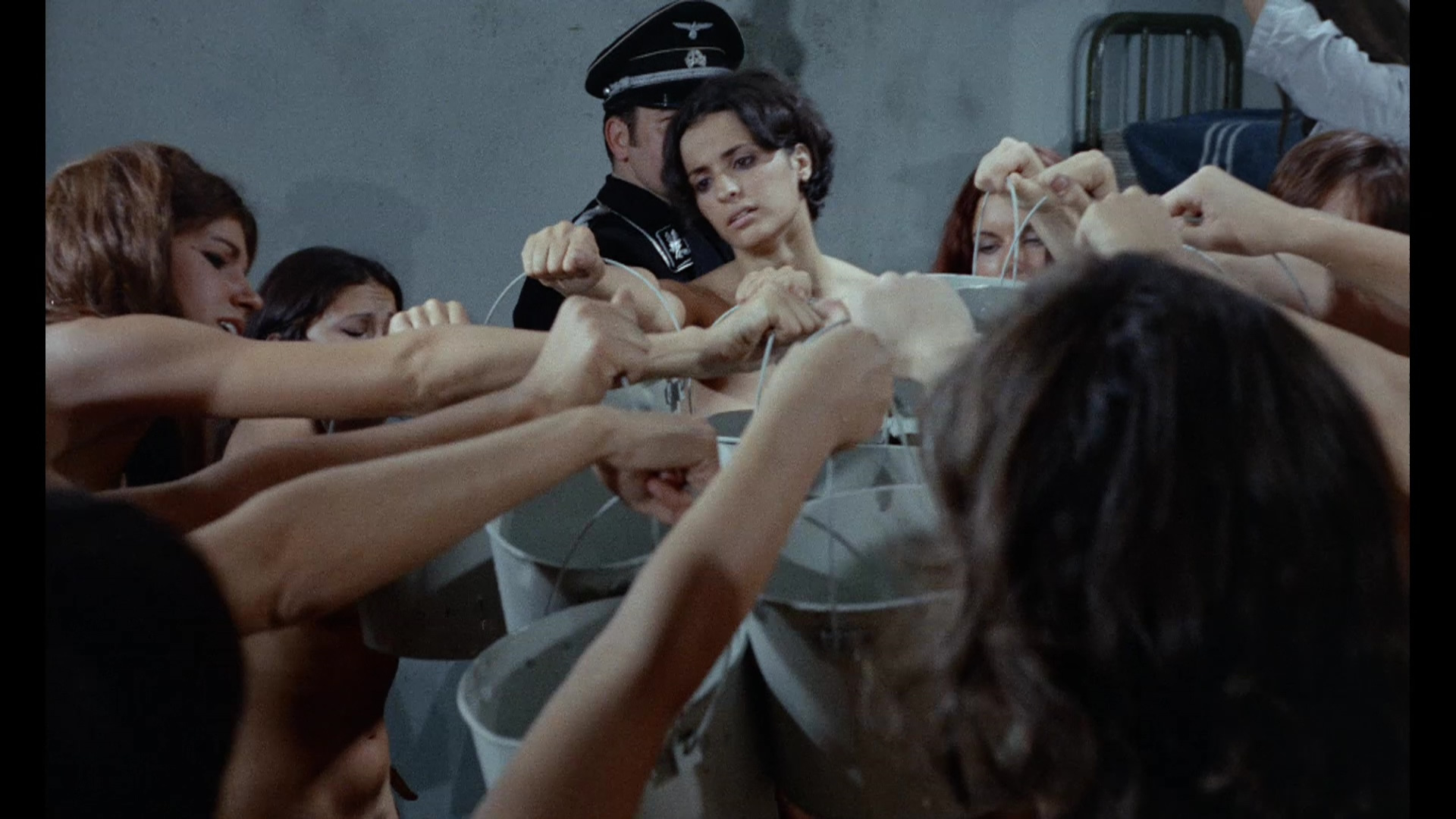 female doctor, but of course that turns out to be a ruse as the women are subjected to a variety of humiliating scenarios in which they’re groped and abused by every man in sight. The objective is to use their precise memories to find a way to bust out an inmate with valuable scientific information, but that means they must all try to find an escape plan in the process.

This wouldn’t be the last Nazisploitation outing for these filmmakers, with Frost going on to The Black Gestapo and Friedman passing on an official credit as producer of the notorious Ilsa, She-Wolf of the SS. The complete lack of realism and obvious Americanisms of all the “German” characters make this one tough to take seriously; it’s more of a crazy curiosity item that happens to stray into some pretty distasteful territory, which of course is the reason its reputation continues to linger today. Cresse really hams it up as the main commander, while drive-in veteran John Alderman (Little Miss Innocence, Dandy) once again gives a performance way more committed than the material requires as a French(?) officer who gives out instructions in the undercover plot.

Though it’s far from explicit, the basic nature of this film has landed it in way more hot water censorship-wise than you’d expect over the years. Most famously it ended up being branded as a video nasty in the U.K., where it quickly became an infamous cult item due to its legal unavailability on home video. In the U.S. it was slated as one of the earliest special edition titles from Something Weird as part of its distribution through Image Entertainment, but a couple of people at the latter company balked at the content and had it removed from the roster. Something Weird did keep it in circulation as a DVD-R pulled from its drab ‘80s video master used for a VHS release, but a better version popped up in Australia from the label Siren. 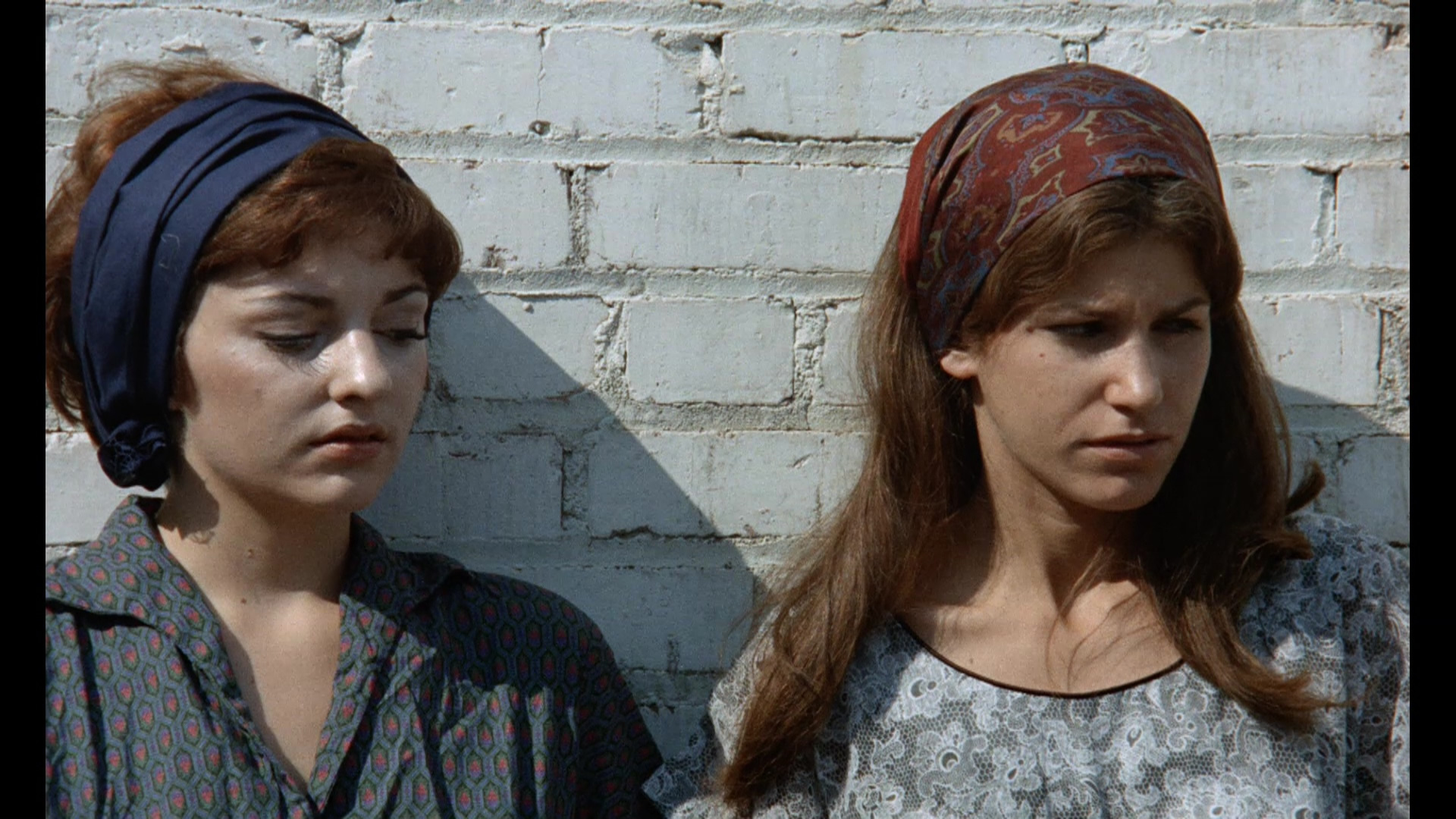 Anyone familiar with this film will be pretty gobsmacked by how it looks on the 2017 Blu-ray and DVD combo release from Blue Underground, who went straight to the original camera negative (recently uncovered, 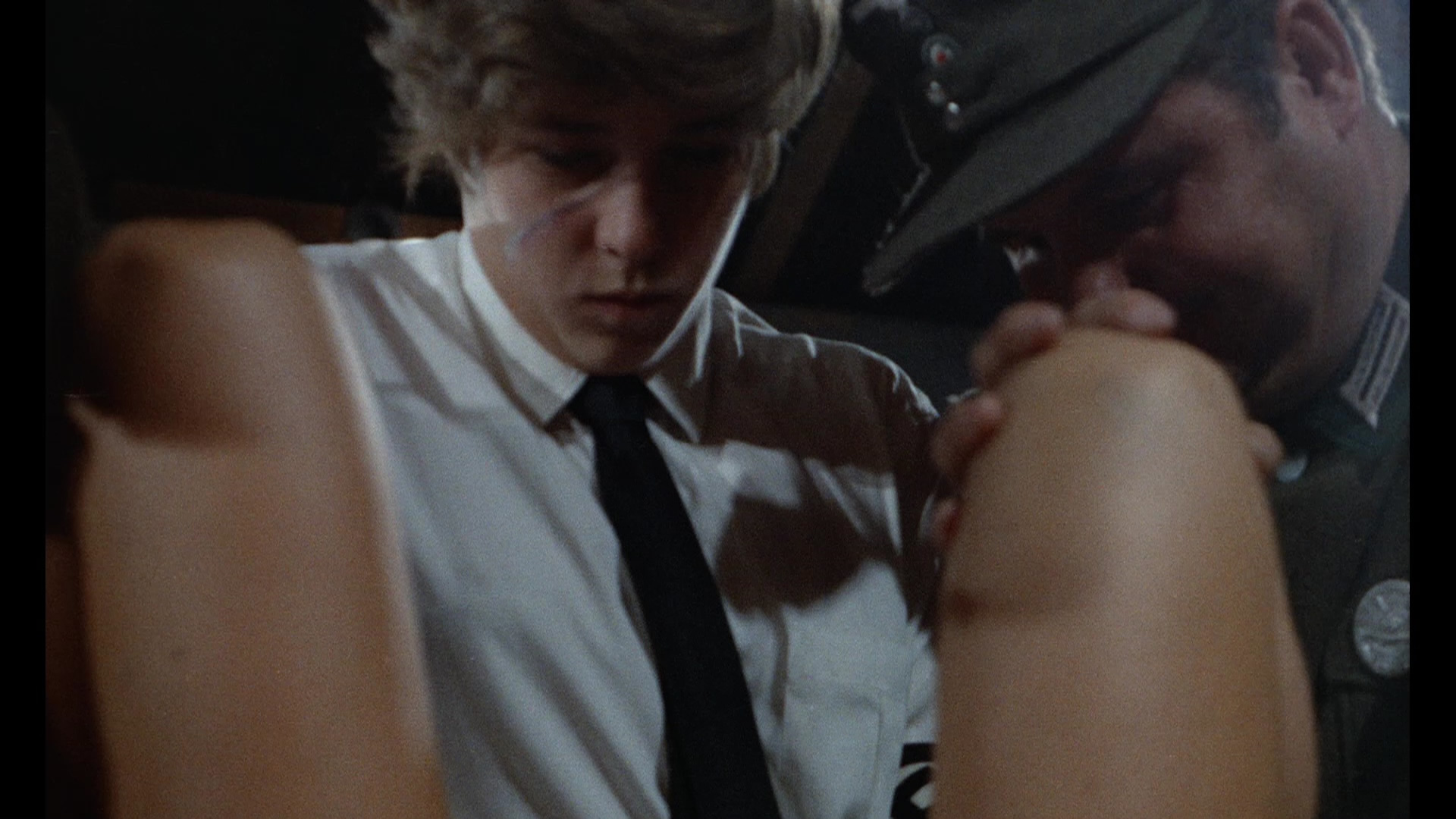 apparently) for a presentation that looks far more vibrant and slick than one could have ever expected. It’s a little surreal seeing a film that once looked so grungy suddenly sparkle like this, but that’s one of the glories of living in the digital age. The 1.66:1 framing also snaps the compositions a bit more into focus, at least mitigating that Hogan’s Heroes feeling just a little bit. The copious topless nudity remains dead center through the film (this is perhaps the most infamous example of those ridiculous softcore films where all the guys confusingly keep their pants on throughout the sex scenes), so the matting doesn’t really affect any of the more, uh, prurient material. The DTS-HD English mono audio sounds immaculate for what it is, with optional subtitles provided in English (SDH), Spanish, Portuguese, French, German, Italian, Danish, Finnish, Dutch, Swedish, Russian, Korean, Chinese, and Japanese. That means now you can find out how to say "I understand your father is in a haberdashery business in Dusseldorf" or "Put the bucket down and give me a chance to use my whip" in Dutch to impress your friends.

Extras include the theatrical trailer, a poster and stills gallery, and the baffling 80-minute “Nazithon: Decadence and Destruction,” which features a tatted actress impersonating a domineering SS officer as she introduces substandard YouTube rips of seemingly every single Nazisploitation trailer in existence, all presented at the wrong frame rate so they’re nice and jerky. At least it’s a handy checklist for future viewing, which you’ll be in the mood for after watching the main feature. The insert booklet features a new essay about the scuzzy subgenre, “The History of Nazi-Exploitation,” penned by Paolo Zelati and touching on all the highs and (extreme) lows of the brief craze from the Ilsa cycle to Salon Kitty to SS Girls.