Okay, short version first: if you're a horror fan, you absolutely need this release. Long version: Back in the early '80s, a moral panic erupted in the United Kingdom under the iron fist of Margaret Thatcher and her cohorts in media censorship who found it handy to blame all of society's ills (and particularly its maladjusted children) on those nasty, nasty horror movies sitting on video shelves around the country. Using rigged data, trumped-up reports in some of the shiftier papers, and an easily frightened public, a number of gory films (almost all of them Italian or American) wound up as the scapegoats for police and lawmakers who raided shops and forced numerous films to be pulled and eventually banned or reissued in drastically cut versions. A list of 72 official nasties was compiled that became instant collector's items, while 39 actually went on to become titles for which one could actually be prosecuted for owning. Video collectors and store owners were certainly terrorized by the subsequent Video Recordings Act which cited everything from bona fide classics (The Evil Dead, Tenebrae, House by the Cemetery) to ridiculous trash (The Beast in Heat, Faces of Death). Most of the title selections were completely baffling, especially when one considers the more explicit gore titles that went unscathed, but the final list went on to become a sort of checklist of infamy both in England and around the world. Not surprisingly, the country's social problems didn't just magically disappear with

the removal of these films, and after years of public scorn from film fans around the globe, the BBFC eventually began to relax and allow the films to come back out to the public, often uncut or in far more complete forms. Some titles (especially Cannibal Holocaust) may never come out uncut in the U.K., but it's interesting to see over the years how much the brand "video nasty" has become a badge of pride rather than a mark of shame.

Various books and articles have tackled the video nasty subject in some detail, but the first really extensive look at this bizarre chapter in home video history came from Nucleus Films in 2010 in the form of Video Nasties: The Definitive Guide, an eye-opening three-disc set that kicks off with its centerpiece, a fascinating documentary by Jake West (Evil Aliens, Doghouse) entitled "Video Nasties: Moral Panic, Censorship & Videotape." The same set was finally carried over virtually verbatim for American consumption in 2014, and while the moral frenzy itself might not have the same resonance, the wealth of material and delirious coverage of a tragic chapter in world censorship makes it essential viewing for horror fans of all stripes. (Also, the retro Severin logo designed for this release is pretty killer.)

This cleverly designed overview features some nifty homages to VHS technology (I'll say no more for fear of spoiling the fun) along with hilarious nods to today's digital video age, with a wide array of interview subjects on both sides of the argument laying out the whole story. Contemporary directors like Neil Marshall (The Descent) and Christopher Smith (Severance) alternate with comments from genre critics who were there at the time (Alan Jones, Kim Newman, Nucleus' Marc Morris) and MP Graham Bright, with archival comments from the notorious Mary Whitehouse

(indisputably the most destructive, hated figure among film censors of all time) and former BBFC head James Ferman. There's a lot of fascinating material here (especially Newman's revelation that the Video Recordings Act was never officially enacted and writer Martin Barker's flat-out debunking of the era's "scientific studies"), and the whole thing flies by very quickly with enough goodies to fascinate both experts and newcomers. Particularly funny are the examples of films erroneously earmarked for investigation and even seized by mistake on the basis of their titles, such as The Big Red One and The Best Little Whorehouse in Texas. That's just the tip of this bloody iceberg, however, as the first disc also contains a massive (52-minute!) "Video Ident-a-Thon" reel of VHS-era company logos guaranteed to elicit waves of nostalgia in collectors of a certain age; British companies get the focus here, of course, but a lot of US labels sneak through here as well. There's also a fun gallery of '80s horror VHS sleeves, consisting of a few additional films that fall within the spirit if not the letter of the nasty list, and on the UK version, bonus trailers for other Nucleus titles like Cannibal Girls, Ghost Story, and Death Ship. 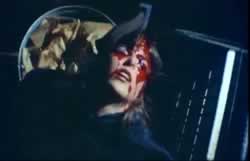 Even those not interested in the video nasty topic itself will find plenty of unexpected treasure in the second and third discs, which focus specifically on each of the 72 controversial titles. Disc two hones in on the 39 final films and presents the original trailers for each film along with extensive, often hilarious and insightful video intros by a variety of experts a la Trailers from Hell. The films are presented in alphabetical order, which means you get a double dose of D'Amato at the beginning with Absurd and Anthropogphaus: The Beast. Many of the films get logical commentators (Argento expert Alan Jones tackles Tenebrae, Kim Newman has Last House on the Left, Abel Ferrara biographer Brad Stevens gets Driller Killer, and so on), and the cumulative result is a giddy rollercoaster ride for hours and hours through the funhouse of home video horror's golden age. You're guaranteed to get an urge to revisit many of the films on this list, thanks in large part to the knowledge and enthusiasm of the participants; while almost everyone is at the top of their game, the real star here is Nightmare USA author Stephen Thrower whose perceptive, even moving appraisals of titles like Axe and Blood Feast are almost worth the price of the set itself. TV presenter Emily Booth is vivacious enough as the de facto host, and occasionally she even comes across like a chipper newcaster while covering fare like The Werewolf and the Yeti. The only quibble here is divisive Dark Side editor Allan Bryce, whose condescending and very brief remarks about Cannibal Ferox and Island of Death offer little more than a superficial checklist of outrageous elements. Also be sure to catch the section on Zombie (alias Zombie Flesh Eaters), a particular gem with multiple commentators like Chris Smith; however, Alan Jones gets the best moment talking about how Lucio Fulci

threw up on him when they first met. The delightfully goth Dr. Patricia MacCormack tackles a wild array of titles including Night of the Bloody Apes (with a wicked reading of its statement about male body hair), and Xavier Mendik (director of Brunel University's Cine-Excess) contributes some nice insights as well, especially a perceptive breakdown of the merits of I Spit on Your Grave's inventive use of sound (though in an amusing bit of cultural generalization, he refers to the film's upstate New York villains as "rednecks!"). Finally, it's just downright surreal to see media professor Julian Petley launch into a serious discussion of Love Camp 7 and SS Experiment Camp. As for the trailers themselves, Marc Morris proves himself to be a video archaeologist beyond reproach by digging up some amazing treasures here along with the more familiar Fulci, Bava, and Argento promos. For example, you'll get to see previously lost holy grails like a subtitled German-language trailer for Island of Death, a subtitled Italian trailer for Gestapo's Last Orgy, the very obscure scope trailer for Madhouse, the nutty Mardi Gras Massacre trailer, the infamous UK trailer for Nightmares in a Damaged Brain, a subtitled French trailer for The Werewolf and the Yeti, the wonderfully deranged Night of the Demon trailer, a UK TV spot for Tenebrae (with wholly different dubbing), and a gorgeous version of the extremely rare scope trailer for Flesh for Frankenstein. (Amusingly, it seems like Morris was also left covering some of the scruffier titles no one else wanted to touch like Cannibal Terror and Faces of Death, so it's to his credit that he's able to wring some useful and even delightful material out of these disreputable dregs.) You can also play the trailers straight through without intros as a kind of party reel, which is also higly recommended.

Sound appetizing? Well, there's still one more disc left to cover the remaining "Dropped 33," which were "successfully prosecuted under Section 2 of the Obscene Publications Act, 1959" but eventually acquitted and sent back out for public consumption. Things get especially odd here as the titles involved veer all over the place from Inferno to The Living Dead at Manchester Morgue and Dead and Buried. The same participants carry over here and do a good job with a slightly less incendiary batch of titles: Stevens in particular rattles off a lot of nifty associations and observations involving Death Trap (better known as Eaten Alive) and offers a solid thumbnail sketch of Tobe Hooper's output; Kim Newman tries to figure out how on earth the ridiculous Delirium (aka Psycho Puppet) wound up on the list and gives a cheeky take on Pranks (aka The Dorm that Dripped Blood); Bryce glides right past the more maniacal elements of Don't Go Near the Park and The Funhouse; MacCormack gives an appropriately academic reading of The Beyond and a wildly inappropriate academic one for The Revenge of the Bogey Man (aka Boogeyman II) and Zombie Creeping Flesh (aka Hell of the Living Dead); Alan Jones covers the lion's share of Italian titles and offers some wonderful anecdotes about Dario Argento fan favorite Inferno; Mendik tackles some of the odder entries like the perplexing, almost forgotten Unhinged; and not surprisingly, Stephen Thrower offers terrific, encyclopedic overviews of Don't Go in the House and Don't Look in the Basement, whose reputations he has aided considerably in print, while he more surprisingly mounts a lengthy fascinating reading of Andzej Zulawski's Possession. The trailers here are generally more familiar, but you do get some unexpected surprises from the vaults like the ultra-obscure Frozen Scream (and wow, is that an odd one), Human Experiments, I Miss You Hugs & Kisses, The Slayer, Terror Eyes (aka Night School), and the trailer for Pranks under its original title. It's also worth pointing out that many of the more familiar trailers like The Boogey Man are also presented in much better (anamorphic) quality than before, and you can opt to simply view the trailers themselves back to back without the intros. Incidentally, all of the trailers come with a terrific menu screen option involving big clamshell VHS spines, and optional English subtitles are offered for everything on the entire release along with additional video sleeve galleries for all of the relevant titles. A massive labor of love, this comes highly recommended all around and can already take a proud spot as a significant piece of horror movie history.