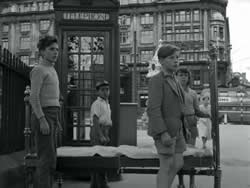 A significant movie presence for at least two generations of British kids was the Children's Film Foundation, a program established by film distributor and theater chain owner J. Arthur Rank in 1950 to provide short, brisk, harmless entertainment for his younger audiences. This actually coincided with Walt Disney's plunge into live action the same year with Treasure Island (the studio's first completely non-animated narrative feature), and this DVD set of CFF films from the BFI contains three representative titles -- one for each decade from the '50s through the '70s -- which create a pretty amazing portrait of the development of this form of entertainment until it was eventually swallowed up by television.

First up is "The Salvage Gang" from 1958, the formula is pretty well-established already: a tight running time (50 minutes), a small group of scrappy and resourceful kids who get into trouble (but not too much trouble), funny hijinks involving confused adults, and a very British sensibility including lots of great location footage. There's also a pronounced surrealist streak here, including the sight of four kids pushing a brass bed frame carrying a homeless man through the streets of London. Based on a story by English historian and children's writer Mary Cathcart Borer, this one introduces a quartet of tykes -- Freddie, Pat, Ali, and Kim -- gathered around a rabbit hutch. Deeming the pet's home to be unsuitable, they decide to make a better one by whatever means necessary. Unfortunately they break a pricey saw in the process, so it's off to the city streets to round up enough cash to buy a replacement. Their first attempts only aggravate the adults around them when they try to pull a Tom Sawyer whitewash on a barge and take up vehicle- and dog-washing services, leading to complications in which they mistakenly wind up taking one of their brass beds across town to sell to a salvage merchant.

Basically a sunny kids' adventure with only the faintest trace of a serious message (take responsibility for yourself and your possessions, basically), "The Salvage Gang" works best today as a snapshot of London in between the war era and its reinvention as ground zero for a pop culture revolution in the '60s. Television was creeping in, car models where changing, and though everyone still looked clean cut, fashions were just beginning to morph again. There's also the surprisingly nonchalant and respectful presence of Ali, something you'd never see in an American film of the time. It's all briskly and cleanly directed by John Krish, who went on to direct the quirky Decline and Fall... of a Birdwatcher. 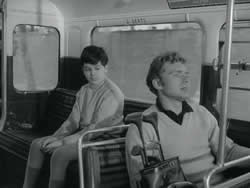 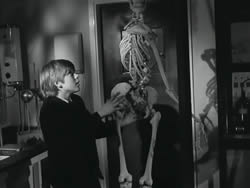 Up next is the somewhat pulpier "Operation Third Form" from 1966, which runs a bit longer at 56 minutes and obviously runs parallel to some of the Hollywood youth-in-peril spy films of the time like Disney's The Moon-Spinners. James Bond fever was at its height, so anything espionage-related had a guaranteed audience built in. Here we have the exploits of young schoolboy Dick (a very young John Moulder-Brown, way before The House that Screamed and Deep End), whose night in a nearly abandoned school building leads to a broken window, a William Castle-inspired scenario with a scary skeleton, and false accusations of stealing a valuable bell from the H.M.S. Dolphin belonging to a prominent admiral. Soon Dick figures out that the historic bell fell into the hands of a junk dealer (scared by the aforementioned skeleton) and was swiped by an unscrupulous crook named Skinner (Derren Nesbitt from Burke & Hare and Where Eagles Dare). Determined to clear his name and get to the bottom of the mystery, Dick joins up with his mates to use all of their amateur surveillance techniques to bring the bad guy to justice.

Easily the grooviest offering in the set, "Operation Third Form" bounces along with a punchy John Barry-style score by Harry Robertson (Twins of Evil) and a great performance from Moulder-Brown, who was already a veteran of the large and small screens at the time. He also has a fun rapport with his one female cohort, Jill, who's played by Roberta Tovey, who played little Susan in Dr. Who and the Daleks and Daleks' Invasion Earth: 2150 A.D. and even had bit parts in some later Tigon horror films. The London we see here is obviously a bit different even though it's less than a decade along, with snappier clothes, wilder humor, and a more stylized visual approach including the nocturnal school sequence and the kids' spy antics including some pre-De Palma eavesdropping scenes. This one was directed by David Eady, who also wrote the original story and had earlier directed the middle segment from the brilliant horror anthology Three Cases of Murder.

Finally we shift over to color for the third and final film, "Night Ferry" from 1976, which was also directed by Eady (and shares the same screenwriter as well, Mike Gorell Barnes). While playing with his toy plane in a Clapham train yard, young blond-headed Jeff (Fletcher) is nearly run over by a runaway car that ends up injuring his railway worker dad. Jeff flees the scene only to witness some criminals hurriedly secreting the valuable Nematut mummy away in a security van with the police in hot pursuit. A superstitious driver f 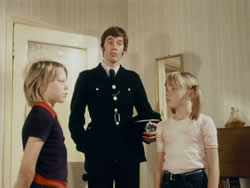 rom the gang (who doesn't like to "meddle with the unknown") throws the cops off the scent by driving a hearse, but Jeff sees the bandits again (still disguised as undertakers) and brings in his friends and sister to track down the baddies. A persistent cop and his invalid father (complete with a Rear Window-style broken leg) are just a couple of obstacles he has to overcome as he traces the criminal ring to supply shop run by the villainous Pyramid (Cribbens, a busy actor famous as the narrator for The Wombles cast very much against type here). It all leads to a third act climax aboard the Night Ferry to Paris, a Hitchcockian bit of r 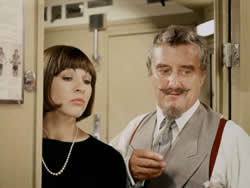 Determined to remain wholesome despite the increasingly relaxed censorship of the era, this is another exercise in kid-friendly suspense with an Egyptian-themed caper straight out of a young adult novel from the period. The formula here is basically the same as one protagonist youngster rounds up his friends to take down a nefarious plot, but the train-centric nature of the story means plenty of valuable footage of stations and vehicles either substantially altered or completely gone now. The working class setting also keeps it more interesting and grounded than the manner in which the material would be handled now, and once again it's all put together with plenty of polish and class complete with another (much more traditional) score by Robinson, who had weirdly just come off of Legend of the Werewolf and The Ghoul.

The film elements for all three titles have been kept in superb shape judging by the nearly blemish-free transfers seen here, with the two monochrome ones looking especially vivid and pristine. "Night Ferry" has a more deliberately rough and gritty appearance, while the prior two have a slickness and brightness more common to their respective periods. The mono audio sounds fine for all three, though again "Night Ferry" was recorded under less controlled conditions and is limited by the ambient nature of the locations. The sole video extra is the 13-minute "Topic - Children's Theatre," a 1959 overview of the series with Rank and CFF director Mary Field talking about their intentions for the series including plenty of "rough and tumble" action without any close-up violence. Krish is also interviewed during the filming of "The Salvage Gang," talking about his very low budgets and how he never patronizes his young actors or audiences. The enclosed liner notes booklet contains essays about the CFF and these films in particular by Andrew Roberts, Vic Pratt, and Sonia Genaitay, including trivia about the CFF's founding and thoughts on some of the more important visual treasures contained in each of them. Also, a special shout out to the painted cover art commissioned for this release; it's absolutely perfect.