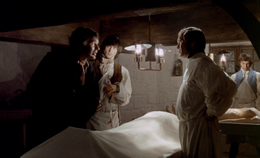 Though Jack the Ripper is easily the most famous true-crime figure to inspire waves of horror films, he's hardly the only one. Case in point: William Burke and William Hare, a pair of grave robbers in 19th-century Scotland who smothered 17 victims to death and supplied the cadavers for medical demonstrations to Dr. Robert Knox. The infamous case inspired a number of films ranging from serious and somber (Val Lewton's The Body 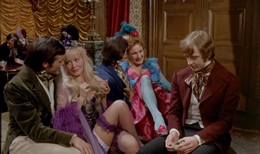 Snatcher, Freddie Francis' The Doctor and the Devils, and John Gilling's The Flesh and the Fiends) to more recent dark comedies like I Sell the Dead and John Landis' Burke and Hare. Somewhere in between is this 1971 version, the last feature directed by former Tigon specialist Vernon Sewell after the outlandish The Blood Beast Terror.

When they realize the futility of hauling up bodies from the ground to sell as medical material to Dr. Knox (Theatre of Blood's Andrews), unscrupulous carousers Burke (Where Eagles Dare's Nesbitt) and Hare (Get Carter's Edwards) decide to raid the local flophouse they operate with their wives, where the aged and alcoholic tenants tend to pass on with great regularity. Soon they realize that it would be faster, cheaper, and easier to just suffocate the lodgers to turn a quicker profit, and when they aren't busy killing time at the local brothel, they start a macabre business handing over bodies to Dr. Knox on a regular basis. However, they can only keep up these antics for so long before people start to become suspicious... 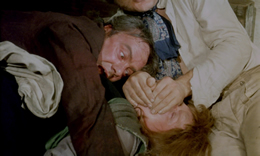 Despite the obviously grim subject matter, Burke & Hare plays lighter than expected for most of its running time. Many scenes have a bright, cheerful quality that contrasts with the nasty doings behind closed doors, and the jaunty "music hall meets psych-rock" theme song should tip viewers off from the beginning that this won't be a typical horror film by a long shot. On top of that there's a healthy amount of skin on display, including amusing and revealing roles for Lust for a Vampire's Yutte Stensgaard and The Iron Rose's Françoise Pascal. Andrews seems a little too bland for his role (which was done far better in other films), but Edwards and especially the underrated Nesbitt (sporting a wild set of skinny sideburns) do a fine job of capturing the sinister and 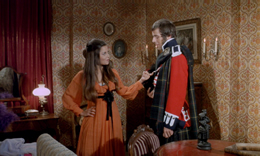 comical sides of their roles without tipping over into Benny Hill territory. A few other familiar faces flit around in the background, too, including Quatermass and the Pit's Duncan Lamont, British TV regular David Pugh (who gets the most disturbing scene as "Daft Jamie"), and even James Hayter, who played Mr. Jessop in Oliver!

Though not as famous as some of its more famous counterparts from the same era, Burke & Hare had a respectable theatrical run from New World in America and has enjoyed a fairly healthy life on home video going all the way back to the laserdisc days. The first DVD directly released by Redemption was an open matte presentation, not bad for its time and also featuring an amusing featurette called "Grave Desires: Corpses on Film" with regular UK horror commentator Dr. Patricia MacCormack, who dissects (sorry) the horror film's fascination with revering and desecrating the human form at the same time. That same featurette is carried over to the Redemption Blu-Ray and reissued DVD courtesy of Kino Lorber, though the new HD transfer here easily bests all of its predecessors. While some of the film is intentionally dark and murky at times (especially the opening scene), most of it looks sharp, bright, and colorful; the transfer matches it, looking generations ahead of what we've seen before. Interestingly, the film looks like it was shot with two different apertures; most of it is presented hard matted at 1.66:1, though the credits and some shots fill out the left side of the matte with visual info or have a soft-matted left black bar on the side. It's barely noticeable but a curious little oddity to be sure. The menu screens make very prominent use of that theme song (good luck getting it out of your head for the rest of the day) and, apart from the preexisting featurette, lead to the trailer, bonus trailers for other UK horror Redemption titles (Virgin Witch, The Asphyx, Killer's Moon), and one great new video extra: a five-minute HD interview in English with Pascal who talks about her acting career at the time, disdain for the Burke & Hare script, her friendship with some of the actors, and a hilarious critique of her performance from a razor-tongued critic.