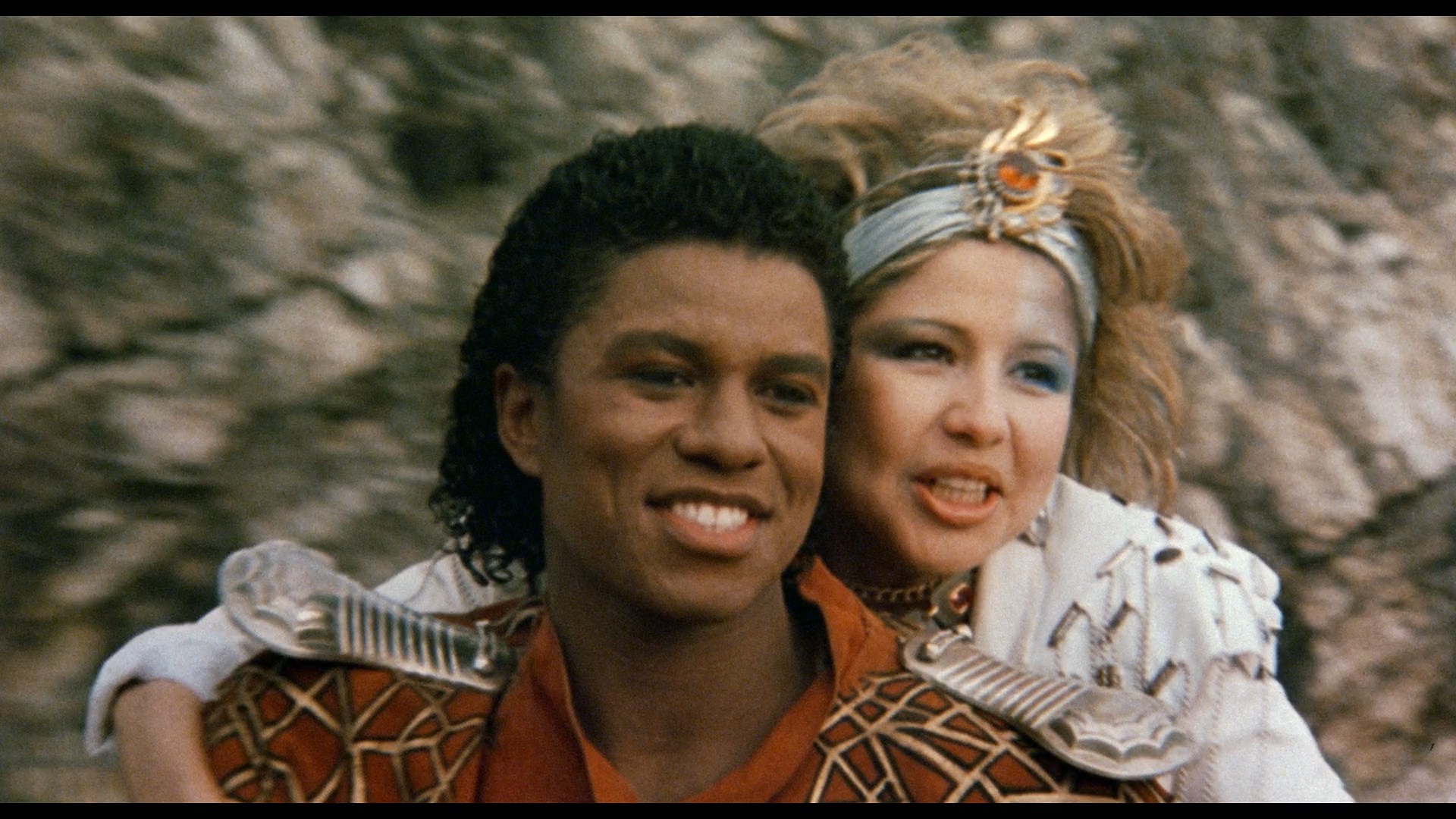 The undisputed queen of '80s camp, Pia Zadora became a household name of sorts when she won a Best Newcomer Golden Globe for the lurid Butterfly, followed by the 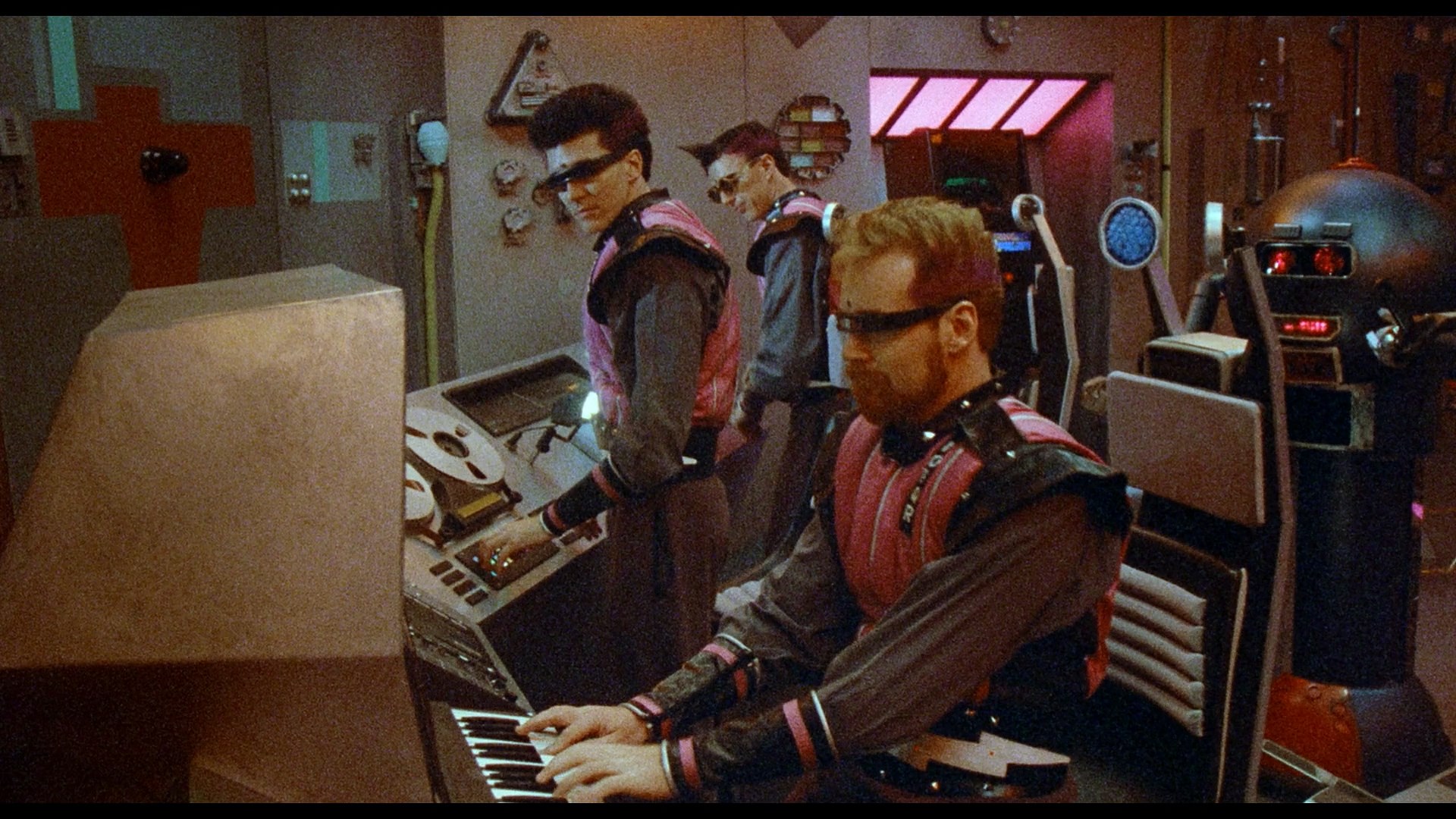 ridiculous soap opera The Lonely Lady. Proving she could be a good sport, she went on to both a credible singing career and perhaps the decade's most ridiculous New Wave musical, Voyage of the Rock Aliens. A bizarre, virtually plotless collection of music video-style song and dance numbers wedged into a carbon copy of the kitschy 1970 Olivia Newton-John musical Toomorrow, it begins with some aliens on a ship watching the music video for Pia's European hit duet with Jermaine Jackson, "When the Rain Begins to Fall" (still the biggest hit for both of them, and a surprisingly catchy song even if the video itself is a hilarious epic-length, sci-fi/bike gang disaster).

After that the "narrative" kicks in as we hop to the town of Speelburgh (wink, wink) where Dee Dee (Pia, of course) and her feather-haired boyfriend, Frankie (a pre-Nightbreed Craig Sheffer), have attracted the aliens (played by members of the band Rhema) who, in their guitar-shaped ship, are looking for true rock and roll. Frankie wants his rockabilly band to be the number one act in town, and Dee Dee's tendency to burst into perky songs (even in the ladies' room) apparently might endanger his shot at the big dance coming up. Then you have Ruth Gordon as the lusty geriatric sheriff on the hunt for UFOs, and during the climax there's even The Hills Have Eyes' Michael Berryman saving the day with deadly implements! Oh yeah, and the high school gets attacked by a giant sea monster that wraps its tentacles around the building and has a showdown with Dee Dee and Frankie in the gym. Yes, it's that kind of movie. 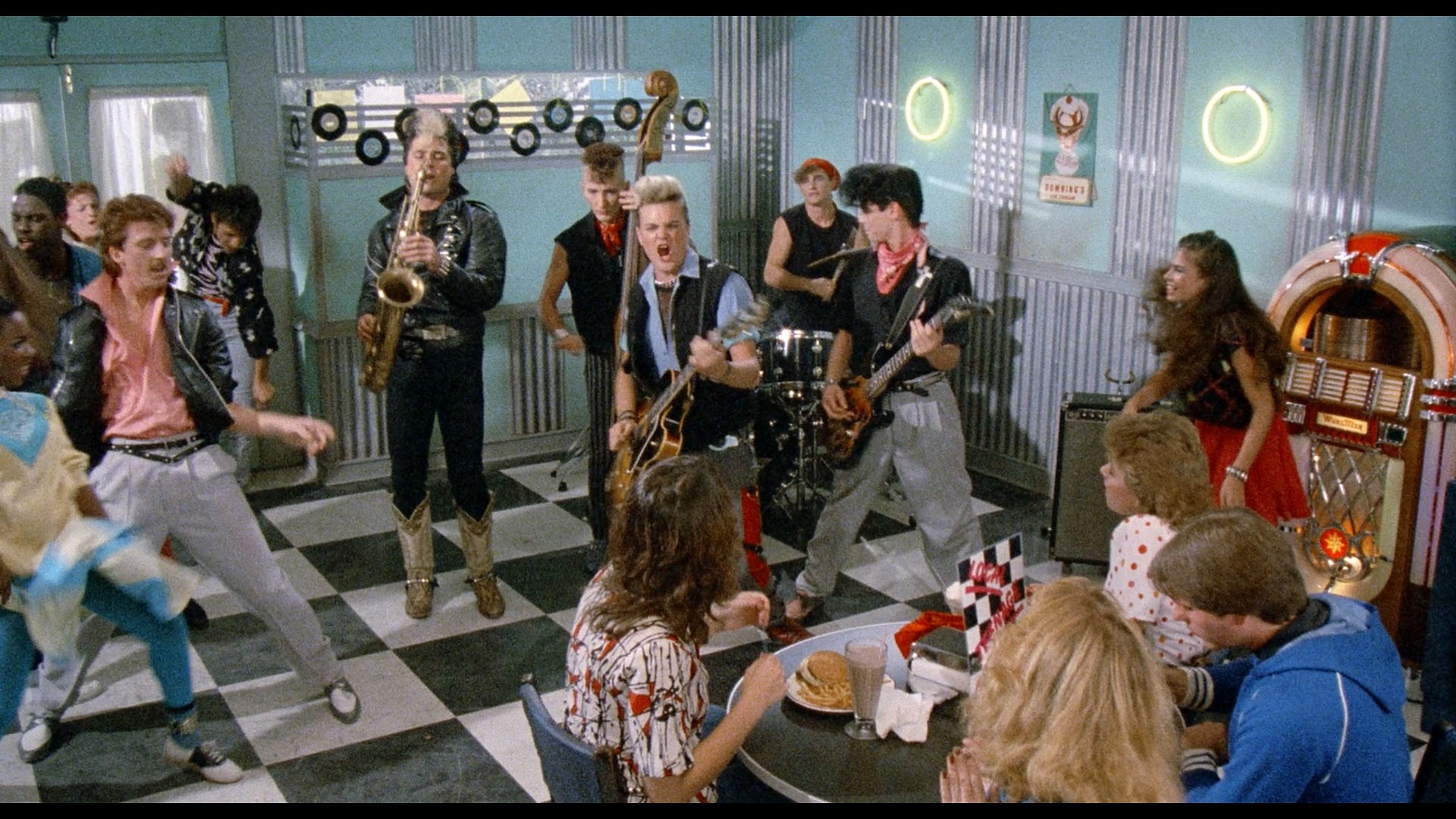 Though utterly worthless as cinema, Voyage of the Rock Aliens is a jaw-dropping time capsule on every pop culture level imaginable. Glowing checkerboard clothes, synth-heavy pop music, and a horrific solo number with Sheffer slowly intercut with a glowering cougar ensure that this will live in the pantheon of beloved bad movies for eternity for the steadfast excavators who keep stumbling across it; there is indeed a good reason why sites devoted to cinematic catastrophes always get around to this one sooner or later despite the fact that it only played American theaters in very limited regional test campaigns. Meanwhile lucky Europeans got it on a much larger scale, while the soundtrack has become a valuable collector's item for those lucky 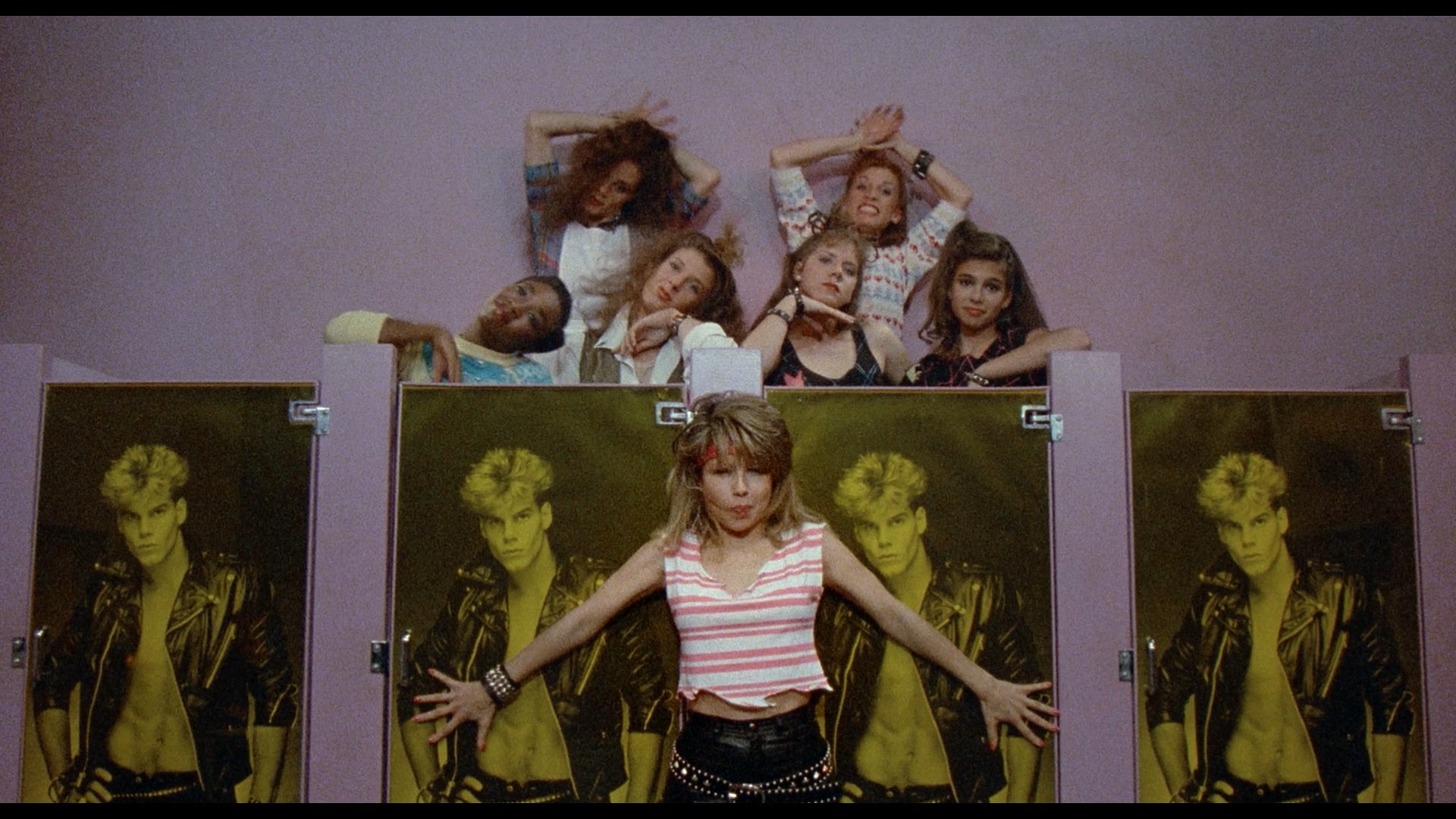 enough to stumble on it. Most people caught the movie four years later when Vestron unleashed this on VHS, while occasional cable airings ensured stunned reactions from unsuspecting HBO subscribers from coast to coast. And would you believe it was directed by James Fargo, who started off with the Dirty Harry film The Enforcer and went on to the Chuck Norris vehicle Forced Vengeance?

All of the VHS versions of this film have looked terrible, complete with that desaturated, fuzzy sheen familiar from most late '80s Vestron titles. That same version was rehashed for the UK DVD, which is Region 2 encoded and worth picking up only if you have no other option. Far more preferable for standard def folks is the German DVD version from 2011, which is region free and features a far superior transfer. Still full frame (obviously open matte, which is fine), it's imperfect given the ramshackle nature of its construction but, for 90% of the running time, much more sharp and colorful than any other version out there. The opening music video still looks drab and murky by comparison, and for reasons made clear in the extras, the final scene (featuring Zadora and Sheffer reprising "When the Rain Begins to Fall," with the latter absurdly mouthing Jermaine's vocals) is obviously sourced from a vastly inferior tape source. The bonus features include the UK ending in pristine quality, which recuts the finale to omit the onscreen vocals and instead turns into a somewhat more tolerable montage. Other bonuses include the original trailer (which is... indescribable), the alternate German credits (from a cruddy VHS source), and the original standalone music video for "When the Rain Begins to Fall," which begins and ends without the aliens. Audio is presented in 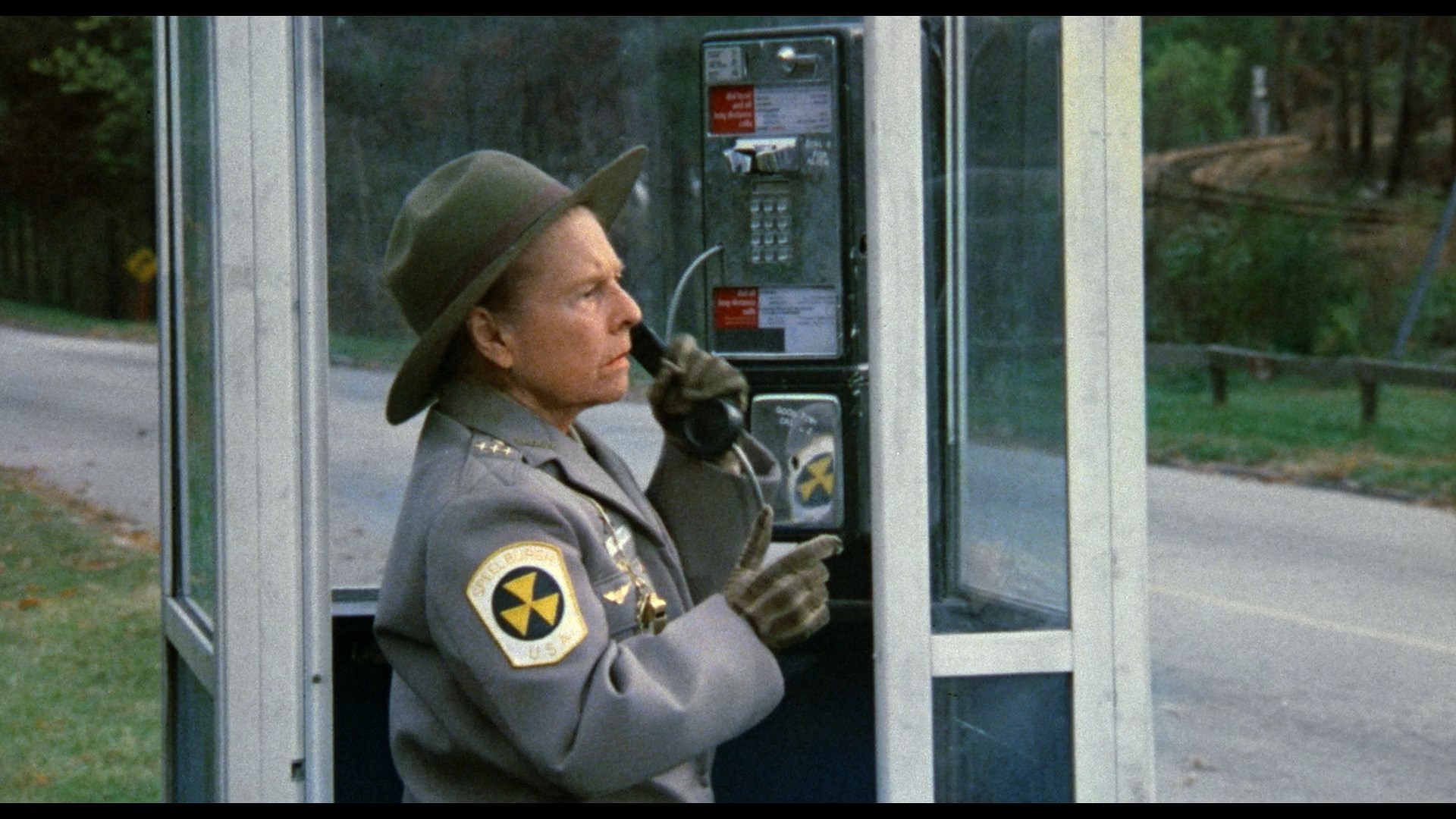 English or German stereo with no subtitles.

Though the film is available in Germany as a single-disc release, a double-disc special edition is also available with a real treasure trove for fans waiting on the second disc. It's a 45-minute "Video Album" originally prepared to promote the film by MCA/Curb Records (yes, as in the prolific music producer Mike Curb, one of the film's producers), containing a slew of original music videos for songs on the soundtrack. (And nope, it's not just cut-up clips from the movie.) The Jackson/Zadora video is carried over here again, of course (and incredibly, it was later remade as a techno dance song), but you also get the great, semi-rare video for "Openhearted" by Real Life (of "Send Me an Angel" fame), 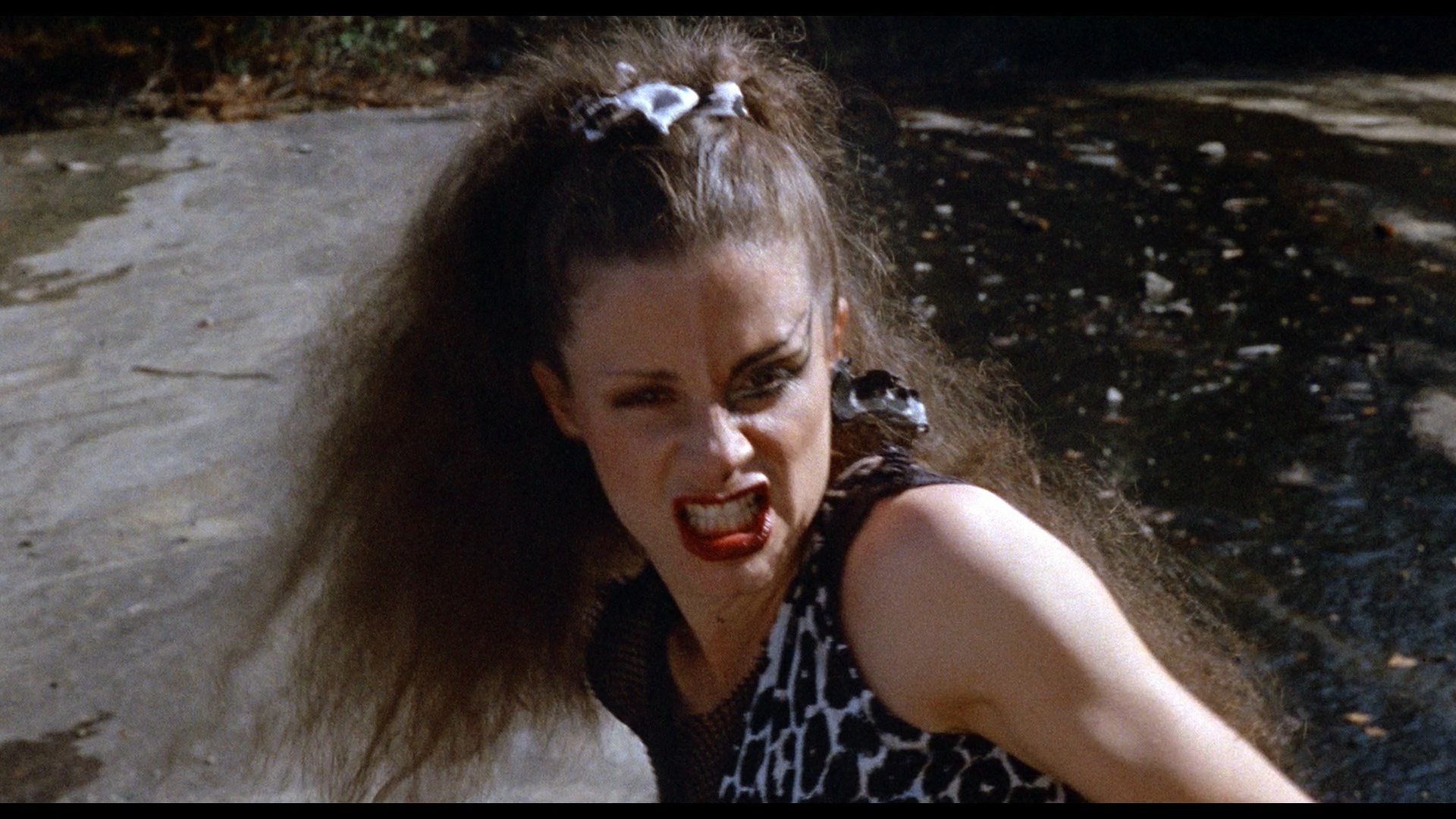 "She Doesn't Mean a Thing to Me" by Mark Spiro, "Back on the Street" by 3 Speed (basically a three-minute ode to Michael Berryman), "Nature of the Beast" by Michael Bradley, "21st Century" by Rhema, "New Orleans" by Neil Sedaka and Gary U.S. Bond, "Justine" by Jimmy and the Mustangs (a surrealistic camcorder nightmare worth the price by itself), "Combine Man" by Rhema, "Let's Dance Tonight" (a streamlined version of the final dance number), and a "work in progress only" version of Pia Zadora's video for "Little Bit of Heaven."

Since German home video execs are apparently insane, that meant this one had to come out on Blu-ray, too. Issued two years later, it presents the film in both standard full frame and a matted 1.78:1 version; the latter is utterly skippable since it just blows the image up without any increase in detail and doesn't appear to be better composed. The 1.33:1 version appears to be a better-than-average upconversion from a PAL master (kind of similar to what they did with Farscape), given the bizarre combo of film and video sources stitched together to make up the feature. It actually looks pretty decent in motion and isn't anywhere near the horrific depths some German Blu-rays can sink to (with Stick being one of the worst offenders). English and German audio options are presented in standard Dolby Digital stereo, so if you're dreaming of a lossless version of this puppy, it might be another few decades.

What's most surprising about the Blu-ray (in a good way) is the extras, with everything from the double-disc set ported over (trailer, music videos, German credits, UK ending). Newly added are four very different TV spots, a 17-minute "promo reel" (one of those extended pitches they used to run on TV to fill up space between movies with an overly enthusiastic announcer trying to sum up the highlights), a "bilgergalerie" of promotional stills and artwork, and an extra four music videos(!): Jimmy and the Mustangs' "Trouble Maker," Zadora's "Real Love" and "You Bring Out the Lover in Me," and the movie version of "Little Bit of Heaven" slightly retooled into music video form. If you're an '80s pop trash fan, it doesn't get much better than this.