Color, 1982, 107m. / Directed by Matt Cimber / Starring Stacy Keach, Pia Zadora, Orson Welles, James Franciscus, Lois Nettleton, Edward Albert, Stuart Whitman
Industrial (US R1 NTSC) / WS (01.85:1) (16:9)
It may be hard to imagine now, but only in the last few decades has film noir become accepted as a major, significant style of filmmaking; these tough, lurid thrillers from the 1940s and '50s were regarded as disposable programmers in their day, but now you'd be hard pressed to 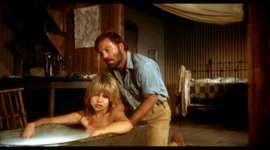 find a more influential force in Hollywood today. What does this have to do with a trashy Pia Zadora movie, you may ask? Well, in 1981, moviegoers were confronted with two very different attempts to revive the noir tradition with modern stars and more explicit sexuality juicing up stories by hardboiled great James M. Cain: Lawrence Kasdan's Body Heat (an unofficial redo of Double Indemnity), and Bob Rafelson's The Postman Always Rings Twice, which one-upped the Lana Turner original by adding Jack Nicholson groping and throttling Jessica Lange on a kitchen table. While the former film was followed by countless copycats (including perhaps the entire modern "erotic thriller" craze of the 1990s), Postman didn't inspire much of anything excpet Butterfly, another James M. Cain adaptation using the same dusty, dreary desert atmosphere and slow-boil pacing. Fortunately what Butterfly lacks in pop culture relevance it more than makes up for in pure cinematic trash value, as Pia Zadora (who even gets an "introducing" credit, even though she'd already appeared in Santa Claus Conquers the Martians as a wee tyke) pouts and gyrates her way through the film in one of the most deliciously nutty femme fatale roles ever conceived. Add to that a whole heap o' sinful shenanigans including Stacy Keach as her presumed father feeling up Pia in a tin bath, Orson Welles as a clucking judge scolding juvenile delinquents, and James Franciscus as a jailbait-chasing scuzzbag, and you've got one seriously warped good time at the movies.

Our tawdry tale begins as Jess Tyler (Keach) mopes around over the failure of his Depression-era silver mine and the struggling town around him. His life is complicated considerably by the arrival of Kady (Zadora), a pubesquent bad girl who waltzes in wearing long, flowing Bob Mackie gowns (yep, the same guy who did Xanadu) and proclaims she's his long-lost daughter from a former fling. Kady undresses and bathes herself in front of her pa, which leads to more than a few deeply uncomfortable moments, and her true motives emerge when she encourages him to get the mine back on its feet so she can get some money to take care of her baby, whose existence already prompted her into a brief stint of prostitution. Kady's behavior (which includes incited barfights nearby) catches the attention of the local populace, with a trial soon dictating whether Jess overstepped the line by getting a little too intimate with someone who might be his offspring. Meanwhile the daddy (Albert) of Kady's baby and a few other lip-smacking financial predators lie in wait, ready to spring...

Even if it weren't a five-course buffet of cinematic soapy indulgence, Butterfly would still be worth a look for the weird roster of its cast (Ed McMahon! June Lockhart! James Franciscus! George "Buck" Flower!) and crew, including a breathy, horny score by Ennio Morricone (who reteamed with director Matt Cimber for the equally hilarious Hundra). Of course, the main source of its notoriety is Zadora, who husband, Meshulam Riklis, bankrolled the film and spent an ungodly amount of promotional money to snag her a Golden Globe Award for "New Star of the Year." Hollywood was not amused, unsurprisingly, and she was quickly given a Razzie Award for the same film, which she promptly followed up by starring

in the notorious The Lonely Lady and doing a Penthouse spread. Of course, Pia went on to redeem herself with a string of surprisingly credible album releases and stage appearances, and like it or not, she's a pop culture figure like no other. While her acting career never recovered from the pummelling she received in the early '80s, it's also worth noting that, while she has more than her share of script howlers here, she isn't really all that terrible; in fact, she seems flat-out accomplished compared to more recent, blank-faced starlets like Jessica Alba and Miley Cyrus, to name only two blatant examples.

While The Lonely Lady still languishes in the obscurity of VHS hell, Pia's unforgettable first big leading role is now preserved on DVD for posterity in a decked-out edition that inspires nothing less than pure awe. The presentation is comparable to previous Cimber releases by Subversive Cinema, with an anamoprhic transfer ranging from solid and attractive in some scenes to mistimed and kind of funky-looking in others. It looks miles ahead of the wretched old Vestron VHS tapes, but there's some odd jitter and instability in many shots while some of the darker scenes could have benefited from a higher bitrate. It's still okay and watchable, but don't expect visual fireworks. Of course, the disc is easily worth the humble price tag simply for the extras, a true trash fanatic's dream come true. Zadora, Cimber, and Riklis team up for a very interesting audio commentary covering the locations, actors, source novel, public reception, and everything else you can imagine; Zadora alternates between cheerful and more than a little snippy, particularly when talking about the bar fight. Then all three appear again for a great 41-minute documentary and are joined by Keach, who seems very pleasant and realistic about the whole enterprise. Everyone seems to think that this film has a huge camp film following, which it may very well have despite its extreme rarity since the mid-'80s. In any case, if your taste runs towards guilty pleasures with an emphasis on heavy breathing and juicy plot twists involving lots of famous actors who should have known better, Butterfly deserves a dark, secret place on your DVD shelf.