unlike anything else you've ever seen. Made during the last gasps of the British governmental subsidies for films with running times for a few minutes to nearly feature length, Sleepwalker is a once-lost and essentially unseen rarity from Saxon Logan, a compatriot of director Lindsay Anderson and one of the many fascinating figures who drifted through the English filmmaking scene during the 1970s and '80s. Part gory slasher film and part biting social satire, it's a wild revelation that will probably confound a few viewers but leave many others shaking their heads that this daring, stylish stunner has remained hidden for so long.

An eerie opening scene immediately blurs the line between dreams and reality as we meet a tweedy middle-aged pair of siblings, the Britains, whose blue-tinted nightmares seem to be bleeding over into their everyday lives. Alex (Douglas) and Marion (Page) live out in the countryside and have a dinner date with a married couple, obnoxious uber-predatory capitalist Richard (Grace) and his wife, Angela (David). An uncomfortable dinner filled with class warfare and bigoted jokes leads to unbridled horror when Richard and Angela stay over for the night, a grueling nightmare from which no one might ever awake.

A very slippery film indeed, Sleepwalker was warmly received upon its initial screenings abroad but got a chilly reception from British distributors at the time. It's actually not difficult to see why as the film firmly refuses to slip easily into the horror conventions you might expect. There's some stylish giallo-style lighting at the beginning and climax along with a fantastic pounding electro soundtrack, but the vicious comedy of manners in between is clearly not something that a distributor would pitch to popcorn-munching horror fans. The packaging for the BFI release (another one of their spectacular Flipside Series release, one of the greatest movie gifts of the Blu-ray era) cites this as a combination of Dario Argento and the aforementioned Lindsay Anderson (who shook up Saxon with the release of his classic if...), though it might also be described as the nasty political dinner games of Don's Party suddenly spliced into a Norman J. Warren horror movie. Also noteworthy is the singular cast, headed by director Bill Douglas in a rare acting role. He's no stranger to the BFI thanks to the earlier releases of The Bill Douglas Trilogy and Comrades, but this is, well, something completely different. However, the meatiest

role easily goes to Grace, a familiar TV actor and one of the screen's finest Oscar Wildes in Ken Russell's still under appreciated

Salome's Last Dance. David and Page, both faces from plentiful '70s TV work as well, offer great support, too. All in all, it's stylish, disorienting, bizarre, and, if you're game, quite amazing.

If the running time for Sleepwalker seems a little odd for a standalone release, have no fear. The dual-format release (Blu-ray and DVD) comes packed with some very substantial extras, turning this into a miniature art house/horror hybrid festival. The main attraction is taken from the only print in existence (which has been locked away in Logan's house in anonymity for decades, apparently), and it looks very good given the low budget and often dark, deliberately distressed shooting conditions. The saturated lighting looks great, and per usual for the BFI, it features a natural cinematic look without any crazy digital noise reduction. First up among the extras is the only one not connected to Logan, 1971's 45-minute short film "The Insomniac." Directed by Rodney Giesler, it's a surreal little chamber piece about a middle-aged married man (The Sweeney's Morris Perry) whose extreme sleep deprivation has him drifting uncomfortably between the real world and fantasy, ranging from paranoia to an afternoon bout of skinny dipping with a young nymphet. According to the great liner notes by Vic Pratt, this was shot on the cinematic scraps from the stock Jean-Luc Godard was using for Sympathy for the Devil, which is kind of startling to contemplate. It's a very worthwhile companion piece and much more sedate than Sleepwalker, though the startling injection of candid nudity and sexuality at the end does shake things up a bit. It's also a fascinating precursor to the great Hammer House of Horror episode "Rude Awakening," which plays with many of the same ideas explored here. Apparently this was programmed in theaters to play before films ranging from 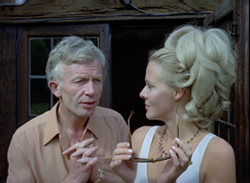 The next extras brings us back to Logan again, first with his 1977 short, "Stepping Out." Running a speedy 11 minutes, it's a tough one to discuss without spoiling but, well, let's just say it involves a young couple getting ready to go out in the morning... with a twist. It's beautifully shot and originally ran as a cinematic appetizer for Roman Polanski's classic The Tenant, which makes perfect sense when you see how it plays out. Another Logan short made two years later is also included: "Working Surface: A Short Study (with Actors) in 'the Ways' of a Bourgeois Writer." Featuring three-fourths of the cast of Sleepwalker in earlier roles, it concerns a writer (Douglas again) who's trying to hammer out a screenplay about two women (David and Page) and finding himself interacting as one of the characters. It's really an intricate editing and acting exercise more than an easily accessible narrative, but the joy of seeing the actors bouncing around with such challenging material makes this a fascinating, lighter companion piece to their later, longer film together.

Last in the set (and the longest!) is a 2013 interview with the director entitled "O Lucky Man: Saxon Logan in Conversation." It's a surprisingly dense and heartfelt discussion of his career (running 72 minutes!) from his early influences and first encounter with Lindsay Anderson (which led to an apprenticeship of sorts on O Lucky Man!) to his projects and collaborations over the years, with an understandable emphasis on his three films seen here. The last 20 minutes are especially powerful when he discusses Sleepwalker, getting visibly emotional about having his once-discarded labor of love rediscovered again; some of his anecdotes are terrific, too, especially concerning Douglas' intense aversion to blood and gore (which became an issue during a dream sequence in which he graphically disembowels his male co-star). He also reveals that a brief but memorable supporting role in the restaurant sequence was originally slated to be played by Anderson, with actor Michael Medwin having to step in instead. The liner notes booklet is also recommended as well, with the "Insomniac" essay above featured along with additional, excellent notes on the two Logan shorts by Alex Davidson and Sam Dunn. There's a longer piece on Sleepwalker as well by Julian Grainger, who sketches out an informative overview of the film's history and does a solid job of breaking down its political components with the four characters each standing in as different components of Britain and its Thatcher-era social tensions at the time (a dry run for The Cook, the Thief, His Wife and Her Lover if you think about it). The only puzzler is when he steers away from labeling this as a horror film at all and describes it as having "only a tiny bit of gore," which is only true if you don't count the incredibly blood-soaked final ten minutes! (This still has a "15" rating from the BBFC, though, which shows just how much they've loosened up over the years.) Another feather in the cap for Flipside, to put it mildly, and a reminder that the cinematic wilds still have plenty of treasures still left to dig up.