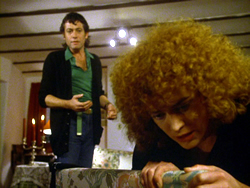 After taking their final theatrical bow in 1979 with a remake of The Lady Vanishes, Hammer Films (in its original incarnation, at least) attempted to break into the television market with a 13-episode series entitled Hammer House of Horror in 1980. Featuring many notable British film and television actors and several familiar horror faces behind the camera as well. Despite the move to the small screen, the episodes doled out a surprising amount of sex, violence, and general nastiness, with several episodes becoming cult classics thanks to the show's regular reappearances on home video including several fondly-remembred episodes on VHS from Thiller Video hosted by Elvira, Mistress of the Dark.

In the first episode, “Witching Time,” composer Jon Finch (Frenzy) becomes drawn into the realm of black magic by a seductive witch (Quinn (The Rocky Horror Picture Show’s Magenta), who turns up naked in h 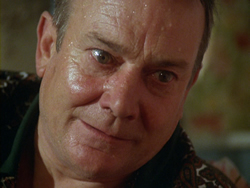 is barn and poses a formidable threat to his married life. A promising if uneven starter for the show, this feels much like mid-’70s Hammer with plentiful bare flesh and grue on display, not to mention a welcome appearance by Zombie's Ian McCullough. More subdued is “The Thirteenth Reunion,” a darkly comic conspiracy tale about a weight loss retreat in the country with a gruesome agenda buried among its members. The clever “Rude Awakening,” a step up across the board and in indication of things to come thanks to swift direction by the great Peter Sasdy (Countess Dracula), offers a sort of nightmarish alternative to Groundhog Day as To the Devil a Daughter's Denholm Elliott (in an excellent performance) finds himself trapped in a seemingly endless Chinese box scenario of recurring nightmares. There's also a fun turn by the pretty and very funny Lucy Gutteridge, who went to the underrated Top Secret! In “Growing Pains,” a couple brings a new child into their home after their son accidentally chugs some chemicals in his father’s lab. 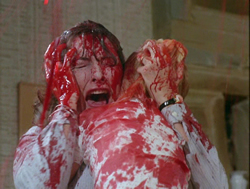 Naturally the new cuckoo in the nest turns out to be quite a bad seed indeed. Amazingly, “The House that Bled to Death” contains very little blood (apart from one standout party scene) as it follows an unfortunate couple (Ball and Davies) through the terrors of moving into a new, cursed home. It's actually more of an atmospheric bit of spooky fun, leading to a twist ending that will either delight or completely tick off horror fans. Finally,“Charlie Boy” takes a British twist on the Zuni fetish doll episode from Trilogy of Terror, with an African doll (which alas doesn’t run around the house) bringing all sorts of misfortune on its new owners.

Things ramp up considerably with perhaps the highlight of the entire series, “The Silent Scream.” Hammer vet Peter Cushing stars as an unhinged pet store owner conducting elaborate behavioral control experiments in the massive basement beneath his store. Eventually he decides to broaden his scope to humans, namely a r 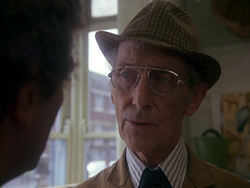 ecently released parolee (a young Brian Cox) whose girlfriend becomes suspicious following his abrupt disappearance. Interestingly, Clive Barker must have seen this before writing his haunting Books of Blood short story, “Dread,” with which this shares a few interesting similarities. “Children of the Full Moon” relies on that reliable chestnut, a couple stranded out in the middle of nowhere, to launch into a twisted, Angela Carter-style tale about preteen werewolves raised in an English manor under the supervision of former Euro sex kitten Diana Dors. Finally, “The Carpathian Eagle” concerns a murderess who slashes her lovers open in bed; is she a real person or the remnant of a horrible supernatural secret? Look for a small role for future 007 Pierce Brosnan in this, one of the most lurid and overstuffed episodes in the series as well as a fond fan favorite. 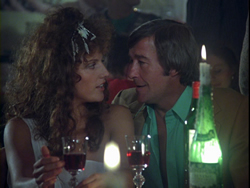 d escaping by car with an antique dealer (Lonnen); both of them soon become involved in the machinations of a sinister cult. Though heavily indebted to Hammer’s earlier classic, The Devil Rides Out, this is still one of the stronger and more atmospheric entries in the series and concludes on an appropriately baroque note. On top of that this was the sole episode directed by Don Sharp, best known for Kiss of the Vampire and Psychomania. The somewhat more traditional “Visitor from the Grave,” another Sasdy offering, finds poor Penny (Scott), recently released from an institution, shooting a man to death when he tries to attack her in her bedroom. Her husband (MacCorkindale) covers up the crime when the police arrive, but soon she’s seeing the deceased in the most unfortunate public places, leading to a double-twist ending. A family of three finds tragedy in “Two Faces of Evil” when a violent car wreck sends the father (Raymond) into the hospital. He returns home in severely damaged condition but doesn’t seem to be quite the same person... Is something diabolical afoot? Finally, the most berserk and perplexing episode of the bunch, “The Mark of Satan,” features Peter McEnery as a morgue worker who believes he has been implanted with a disease (disguised as meningitis) engineered to bring about Satan’s work on earth and represented with recurring instances of the number nine. Baby 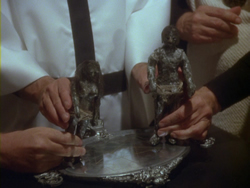 eating and the always excellent Georgina Hale are just a few of the ingredients in this helter-skelter stew, which closes the series with a creepy and very paranoid flourish.

The prevailing atmosphere here feels a bit like that of some other British programs from the same era, particularly The New Avengers, and in a smart move, the short program was shot on 35mm film instead of video, giving it a different feel from some of its macabre TV predecessors such as Brian Clemens' wonderful Thriller, which had to work overtime to compensate for being shot on video. Most interesting is the fact, while most Hammer Films opted for relatively happy and conventional endings after offering the audience its requisite amount of thrills and spills, this television incarnation usually features dark, pessimistic turns at the end, leaving the viewer feeling unsettled. No doubt inspired by the bleak vantage points of such hits 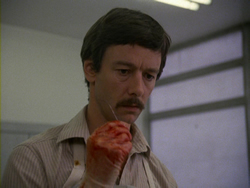 as The Omen and The Stepford Wives, this move was to be later adopted by American TV horror on such series as Tales from the Darkside and the short-lived but memorable Darkroom. The gambit paid off internationally as the shows were picked up in many countries, often sold and broadcast as double features. Apparently "The Mark of Satan" was too morbid and intense, however, as it vanished after its initial broadcast in the UK and only reappeared decades later on DVD. Meanwhile the studio stayed busy with another series, Hammer House of Mystery and Suspense, which is just as good (and also more bizarre and horrific than you'd expect) but much more neglected.

The first DVD releases of this series came close to each other with Carlton issuing it in the UK and A&E in America, with the latter suffering significantly from poor PAL conversion and extremely careless compression. A 2012 edition from Synapse bests them both hands down, with the episodes looking shockingly good (amazing how much better technology's gotten in a few years, authoring-wise) and divided in basically the same configurations (three per disc) as previous versions. The one tweak is moving "The Mark of Satan" to a separate fifth disc and including two significant video extras, both produced by Ballyhoo Motion Pictures (whose excellent work can also be seen on Synapse's releases of Hammer's Twins of Evil and Vampire Circus) and, unexpectedly, both centered on "Visitor from the Grave." First up is an eight-minute "Grave Recollections" featurette with Kathryn Leigh Scott, best known to genre fans as perpetually tormented Maggie Evans (and Josette and other historical permutations) on the TV cult classic Dark Shadows as well as a ghostly appearance in Dan Curtis' version of The Turn of the Screw. She's always a good interviewee and that's still the case here, as she briefly sketches in her acting career up to this episode and talks about "mad Hungarian" Sasdy and her familiarity (or lack thereof) with Hammer to that point. Then Sasdy's wife, actress Mia Nadasi, appears for another brief chat about her colorful role in the episode as a medium as well as her working relationship with her husband, with whom she collaborated four times. Each episode can also be played with short but very substantial video intros by genre writer and Video Watchdog veteran Shane M. Dallmann, who provides some fine voiceover bits of trivia and distinguishing facts about each episode (best watched in order, as it plays out like a mini-epic overview of the series in total). These are accompanied by clips and stills which look like additional Ballyhoo features as well. A magnificent presentation all around for a short but sweet horror anthology from one of the genre's best-loved brand names.