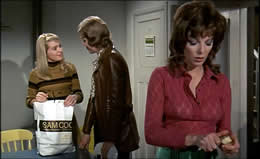 A captivity thriller sold in America as a horror film (under the title Terror from under the House), this British programmer became a familiar VHS staple following the success of star Joan Collins on TV's Dynasty in the '80s before it slipped back into obscurity again. A one-time Hollywood star, Collins made an unexpected switch to odder fare in the UK during the '70s with films like this and its successors such as Tales from the Crypt, Fear in the Night, Dark Places, and her all-time weirdest film, Tales that Witness Madness. Here she plays Carol Radford, a woman 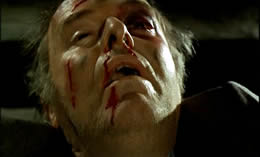 traumatized by the brutal rape and murder of her young daughter. Her husband, pub owner Jim (Darker Than Amber's Booth), hatches a plan to go after the man they believe responsible, Seely (Circus of Horrors' Griffith), who's been released by the police due to lack of evidence. Joining him in the plan for revenge are his son Lee (Marshall) and neighbor Harry (The Reptile's Barrett), whose own child fell victim to the town predator. However, when they manage to get their target tied up in the cellar and exact some physical payback on him, a few unexpected twists of fate intervene.

Modest and well acted, Revenge is a better-than-average bit of kitchen sink suspense with a catchy narrative hook later taken to far more explicit extremes the next year in the American Last House on the Left. There isn't much onscreen sex or violence apart from Collins in her skivvies, exploited fully by the film's marketing, and a few blood-laced beatings; in fact, this got away with a PG rating upon its theatrical release, back when that rating could still be a little bit dangerous.

Acting honors here go to Booth, who has the trickiest role of the bunch, but everyone gets the job done efficiently including a young Sinead Cusack (in a relatively thankless role as Lee's girlfriend). Apart from his horror classic Burn, Witch, 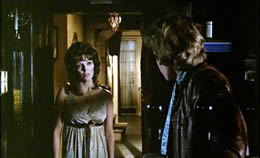 Burn, director Sidney Hayers had never been much of a notable cinema stylist but worked as a very reliable journeyman behind the camera; he performed a similar service the same year on another subdued but tawdry little item, the British giallo wannabe Assault (aka In the Devil's Garden). Interestingly, this film most closely resembles a more famous '70s pop culture fixture, the fantastic Brian Clemmens horror/mystery anthology show Thriller; this would've fit perfectly as one of its installments. There's also a wee bit of foreshadowing of Don't Look Now, but you can discover that connection on your own.

Released by Rank in the UK and the much less prestigious Hemisphere Pictures in America, this film bounced among video labels on VHS (usually in big clamshell boxes) but strangely phased out soon after. Scorpion's release marks both its US DVD debut as well as its first widescreen release on home video, moderately letterboxed (non-anamorphic) at 1.66:1. The framing looks fine and the film element is in good shape; like the film itself, it's an unassuming but perfectly agreeable experience from start to finish. At least it's a significant jump over its prior incarnations, even if in the Blu-Ray era it has to be taken wtih a grain of salt. English mono is the only audio option, and the film can also be played as part of the branded "Katarina's Nightmare Theater." Cheeky hostess Katarina Leigh Waters does her usual cheerful job of delivering trivia nuggets about the film against lurid thematic backdrops, including notes about the cast and director. Also included (along with the nifty reversible cover) are the usual trailers including more Joan Collins '70s goodies (The Devil within Her and Quest for Love) along with more Brit horror like Nothing but the Night and Satan's Slave.