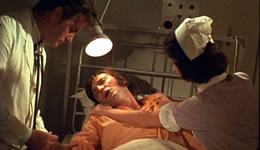 In present day London, nuclear physicist Colin Trafford (Bell) is called in to participate in a radical new experiment involving opening new dimensions and time travel with his colleague, Tom (Elliott). A mishap sends him clutching his head in agony and plummeting to the floor, only to awaken in an alternate reality version of his life in which he's now a respected playwright. His beautiful wife Ottilie (Collins) despises his mere presence, which becomes understandable once he realizes he's been flagrantly unfaithful including a current fling with a bubble-headed blonde (Ashley). However, Colin becomes completely smitten with his estranged wife and becomes determined to woo her all over again, while this new environment exists on a strange plane where major events like the assassination of JFK never happened. As Ottilie begins to warm up to him again, things seem to be coming together... until a nasty secret she's been hiding changes everything forever. 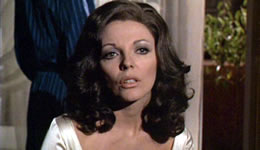 Saddled with an offputting title better suited to a supermarket Harlequin novel, this fascinating and often surprisingly experimental British yarn is based on a story by John Wyndham (author of the source works for The Day of the Triffids and Village of the Damned) entitled "Random Quest," which isn't much of an improvement either. Video companies haven't known what to do with it either, usually dumping it out in the VHS days with a tacky cover geared to Dynasty fans. Actually this manages to straddle the line between two nifty subgenres, the timecrossed lromantic fantasy (best epitomized on film by Somewhere in Time, the wonderful and underseen I'll Never Forget You, and Time After Time), and the alternate reality sci-fi film (such as Journey to the Far Side of the Sun, It Happened Here, and Donnie Darko). Unlike most films of its ilk, this one leaps into the meat of the story almost immediately, barely spending five minutes on our hero's everyday situation before hurling him into a fantastic other world. Collins is surprisingly vulnerable and effective in her role (or, more accurately, roles, but that's getting into spoiler territory), alternating between glamorous social outings and more naturalistic domestic scenes with her suddenly alien spouse. The unusually structured third act may baffle viewers expecting a traditional three-part story built 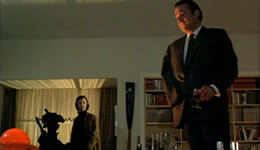 on climax and resolution, and while the gambit doesn't quite pay off 100%, it's to the filmmakers' credit that they come so close to hitting the mark. Even though the film's ambitions don't quite equal its execution (the alternate world is obviously hampered by a low budget and some underdevelopment, for example), but it's a beguiling and strangely haunting experience all the same. Oddly, this was also adapted twice for television, once two years earlier for Out of the Unknown and again in 2006 by the BBC.

Most video versions of this film have been terrible, bargain bin affairs, so Scorpion's DVD has to be an improvement almost by default. The opening credits aren't promising as they're filled with grunge and have the same odd dot-crawling thing going on that plagued Point of Terror, but after that it calms down quickly and becomes watchable enough. The master is certainly a step up, though some odd compositions here and there indicate it might be better framed at 1.66:1; detail and color resolution look a bit drab and dated, but again, anyone who's been trying to hunt this down during its years of unavailability should be happy to have it back in circulation. The mono audio is okay for what it is, with the brash music score coming through well enough. No extra pertinent to the film are included, but you do get bonus trailers for other Scorpion titles like Voyager and Say Hello to Yesterday.