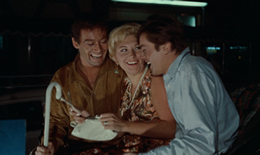 Perhaps the most modern of golden age mystery novels, the Tom Ripley series by Patricia Highsmith (Strangers on a Train) has continued to grow in popularity and relevance every decade thanks to its amoral hero, a sociopathic chameleon whose schemes lead him through an increasingly complex series of crises. The pop culture traces of Ripley can be found in everything from American Psycho to the Hannibal Lecter cycle, though the original 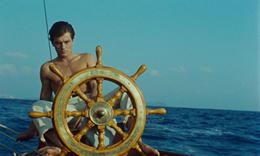 character has yet to be duplicated as he slips back and forth between ruthless villain and peculiar antihero.

The first big screen appearance of Tom Ripley came in 1960 with Plein Soleil ("Blazing Sun"), strangely retitled Purple Noon for most English-speaking territories, in which he is embodied in a star-making turn by French heartthrob Alain Delon. The film sticks to the essentials of Highsmith's plot as Ripley, a young lad in need of money, is hired to track down and retrieve an old classmate, the carousing Philippe Greenleaf (Ronet), to come back from Rome and return to the lucrative family business. However, Tom gets sucked in by the party lifestyle and neglects his duty, even when Philippe gets bored and becomes increasingly cruel to Tom (even leaving him stranded out in a boat all day). On top of that, Tom's emulation of Philippe's lifestyle has become unsettling and borderline obsessive. Soon events take a dark, deadly turn during an afternoon boat ride, and Tom finds himself dealing with a number of new obstacles including Philippe's girlfriend, Marge (Laforêt), and plenty of suspicions that Tom might have done something terrible.

Shot in scorching Technicolor, Purple Noon turned out to be a major hit for director René Clément, a former documentarian who had scored a major critical success in 1952 with Forbidden Games. However, by 1960 he had become something of a target for French New Wave directors like Truffaut, so he brought in some modern collaborators including New Wave screenwriter Paul Gégauff (who wrote many Chabrol films and even starred in Pleasure Party), cinematographer Henri Decaë (The 400 Blows), and Fellini composer Nino Rota, who also accompanied Delon the same year for Rocco and His Brothers.

The end result is a fascinating exercise, a voluptuous slice of aberrant psychology as well as one of the earliest and best French meditations on the conventions of film noir, here cast almost entirely in bright sunlight. The only major alteration from the nov 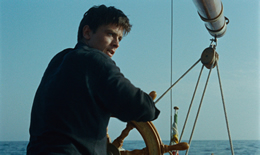 el comes in the final scene, a twist that runs contrary to the original ending and feels akin to those moralistic afterthoughts delivered by the host on Alfred Hitchcock Presents ("...and then the murderer realized he'd mailed the evidence right to the police!"). Of course, it was probably a necessity at the time to ensure any kind of international distribution, so anyone bothered by it can just stop the film a minute or two earlier. Of course, this was hardly the end of Tom Ripley on film; the second book in the series was adapted twice, by Wim Wenders in 1997 as The American Friend and in 2002 by Liliana Cavani as Ripley's Game, while the third, Ripley Under Ground, was made by Roger Spottiswoode in 2005 (and strangely remains unreleased in America to this day). Of course, the source novel for this film was tackled again by Anthony Minghella in 1999 as The Talented Mr. Ripley, adding a pair of new characters and making the homoerotic undertones of the book (which are very submerged in the Delon version) far more prominent.

Purple Noon was produced by Robert and Raymond Hakim, the pair of famously colorful brothers behind such projects as L'eclisse and Isadora. Like another of their films, Belle de Jour, this one became entangled in legal and distribution issues while its film elements became endangered by neglect. A restoration in the mid-'90s presented by Martin Scorsese for both this film and Belle de Jour resulted in successful art house runs from Miramax, followed by laserdisc releases from Criterion and deeply unimpressive, non-anamorphic DVDs from Disney. Remastered versions of the pair eventually surfaced from Studio Canal and its affiliates in Europe, though thankfully the 2012 Blu-Ray from Criterion easily outperforms them all. The transfer is a real knockout, looking extremely close to the restored theatrical prints with saturated, almost surreal colors at times. A handful of shots have always looked rather soft and were probably enlarged during the post-production process, but most of the film looks pristine with richer black levels than most 35mm incarnations. Very solid all around, and the LPCM French mono audio track sounds immaculate as well.

The first video extra features "Clement scholar" Denitza Bantcheva offering a 26-minute overview of the director's career and his approach to this film in particular, including his dismissal of the source novel as uninteresting(!) apart from its potential for ambivalence, the many scenes he wrote himself, and his encouragement of improvisation. A nine-minute Alain Delon interview from 1962 (shot for TV in B&W) is a valuable snapshot of the actor at the height of his popularity, with a fascinating discussion of his preference for choosing directors over scripts and his thoughts on the differences between working for Clément and Luchino Visconti on The Leopard. A 1971 French TV interview with Highsmith is much longer (19 minutes) and features footage of the author at home both inside and outside as she discusses (en francais) her creative process, her unorthodox views on family and friendship, and her thoughts on adaptations of her work, including some scratchy clips from Purple Noon. She also cites Robert Enrico as a potential director for Cry of the Owl, which wound up being Claude Chabrol much later, and picks Strangers on a Train as her favorite film adaptation of her books. Last is an archival English trailer whose origins are never specified, but it's fascinating as it repeatedly refers to this film both onscreen and in voiceover as Talented Mr. Ripley, a title it doesn't seem to bear in any released prints. The substantial liner notes booklet contains a new, excellent essay about the film and novel by Geoffrey O'Brien as well as a 1981 text interview with Clement, Olivier Eyquem, and Jean-Claude Missiaen which covers the making of the film extensively from numerous angles including adaptation, casting, scoring, and location shooting.