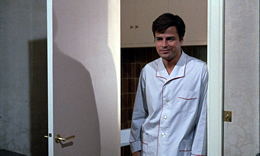 After spending most of the previous decade dabbling in scandalous black-and-white surrealism attacking the conventions of religion and the upper class, director Luis Buñuel startled viewers around the world with the most elegant, colorful, and overtly erotic film in his career: Belle de Jour. Star Catherine Deneuve was becoming an international superstar after her roles in films like Repulsion and The Umbrellas of Cherbourg, and few could resist the idea of her playing a dysfunctional young wife who spends her afternoons selling her body to a peculiar array of clients. However, the film is far more than a titillating tease; it’s a fascinating artistic and psychological experiment whose slippery depictions of fantasy and reality lure receptive audience members back for repeated viewings, each one as beguiling as the last. 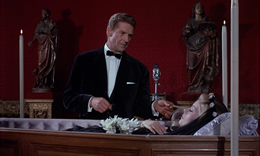 Beautiful young Severine (Deneuve) has a handsome and considerate husband, Pierre (Lizard in a Woman’s Skin’s Sorel), but he’s so understanding he doesn’t protest her inexplicable refusal to have sex. Instead she drifts away into violent, sadomasochistic daydreams involving whipping, antique coaches, and pistol duels. When she hears two friends talking about how a mutual acquaintance had inexplicably decided to become a prostitute, Severine becomes intrigued by the idea and goes to visit the posh Madame Anais (El Cid’s Page), who runs her operation out a swanky Parisian apartment suite. At first Severine retreats from the idea, but she returns and offers to only work in the afternoons. Her clients request a peculiar but manageable array of services including an eerie countryside scenario involving faked necrophilia, but things finally go too far when one of her regulars, a thug named Marcel (Sweet Movie’s Clementi), decides he wants her all to himself. 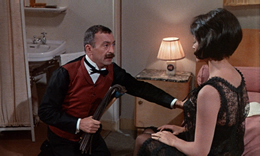 Along with its stellar cast, Belle de Jour is notable for having a director at the peak of his powers in his sole collaboration with cinematographer Sacha Vierny, a world-class master with credits ranging from Last Year at Marienbad to The Cook, the Thief, His Wife & Her Lover. The aethetic here is somewhere between the one-dimensional artifice of classic surrealist paintings and the eerie gloss of fashion magazine chic, with the two mingling most disturbingly in the fantasy and client sequences (which may after all be one and the same). Deneuve is perfectly cast here, developing the fractured blonde persona she developed for Polanski into a damaged soul whose actions lead to a beautifully mysterious final sequence which has spurred debate for decades.

This film was also Buñuel’s only production for Robert and Raymond Hakim, a pair of French-based producers who reached their zenith during the ‘60s with films like L’Eclisse, Eva, Purple Noon, and Isadora. All of these films became entangled in major distribution or release problems of one kind or another, with Belle de Jour and Purple Noon dropped out of public availability for decades in America due to legal complications. Eventually they were salvaged 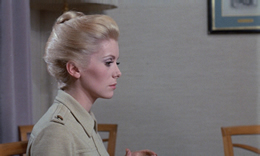 and restored with the championing of Martin Scorsese, while Miramax released them back to art house theaters in the late ‘90s and then onto DVD (in pretty underwhelming non-anamorphic transfers ported over from the briefly available Criterion laserdiscs). At least the Belle de Jour Miramax DVD contains an interesting scholarly commentary with Julie Jones, which has yet to turn up anywhere else. The feature was remastered in Europe a few years later and released on DVD from Studio Canal and its various affiliates like Optimum, with a Region B Blu-Ray following in 2009. Containing the original French language track along with the English, German and Spanish dubs (plus subs in those same languages plus Swedish, Dutch, Danish, Finnish, and Norwegian), the Blu-Ray contains the studio's own commentary by film professor Peter W. Evans, the original English trailer, and a trio of substanital video extras: "The Last Script" (an excellent 94-minute Buñuel documentary), the half-hour "A Story of Perversion or Emancipation?," and the half-hour "Story of a Film," as well as liner notes by Derek Malcolm. The transfer itself looks pretty terrific and easily outclasses even the theatrical reissue prints, though some debris and scratches are still in evidence.

After many years of unavailability following the dismantling of the Miramax library, Belle de Jour finally returned to America's Criterion banner in 2012, a nice reunion from the laserdisc days. Most obviously, the entire set of extras is different from any prior version, and the transfer looks markedly different; there's much less damage in evidence (one fleeting sequence has some faint scratches on the left side), some additional slivers of information are visible on the sides, and the colors are quite a bit more vivid; in particular, the early exterior scenes have a vibrant quality similar to the ones in their transfer of Charade. Skin tones look more robust and less pastel compared to the Studio Canal, though both are excellent options depending on where you reside. Interestingly, the mono French track (the only option here) sounds fuller here as well; those horse clops and ringing bells have never sounded so good. (There's no music score, incidentially.) On the extras front, you get a new audio commentary (third one and counting!) from Michael Wood, who wrote the BFI Film Classics entry on this film and offers perhaps the best of the feature-length analyses out there about it. He has some insightful takes on the fantasy placement and structure, the recurring symbolism found in Buñuel's film, and another interpretation of the final scenes that's worth considering. If you're new to the film, this would be the best of the supplements to tackle first. On the video front, first up is ambitious vidoe featurette "That Obscure Source of Desire" with feminist writer Susie Bright and film professor Linda Williams, who obviously tackle the film as a signfiicant object of study in feminist cinema discourse and peg Severine as a confused submissive masochist. It's all very American college campus-y, but there are some amusing and insightful bits in here including a possible interpretation of the brief communion host flashback. The film's screenwriter, Jean-Claude Carriere (who amazingly had just worked on Jess Franco's The Diabolical Dr. Z and went on to The Tin Drum and The Unbearable Lightness of Being), talks about adapting the Joseph Kessel source novel (to which the script remains surprisingly faithful) and working with Buñuel for the first time; the two would go on to other films including The Discreet Charm of the Bourgeoisie and The Milky Way. He also appears in a fantastic archival TV interview from the French program Cinema with Deneuve, which begins with Deneuve at a mirror talking about the premise and genesis of the film. A really great little find. The French and American theatrical trailers are included along with the Miramax reissue trailer (scored to faux-Enigma music), while the booklet includes new liner notes by Melissa Anderson (complete with illuminating quotes from Deneuve about her discomfort with some of the film, though she worked with Buñuel again on Tristana) and an interview from Buñuel from '70s including a perverse possible explanation for what's inside the famous buzzing box. Easily one of the most essential releases yet from Criterion, this will hopefully mean more Buñuel in HD to come.