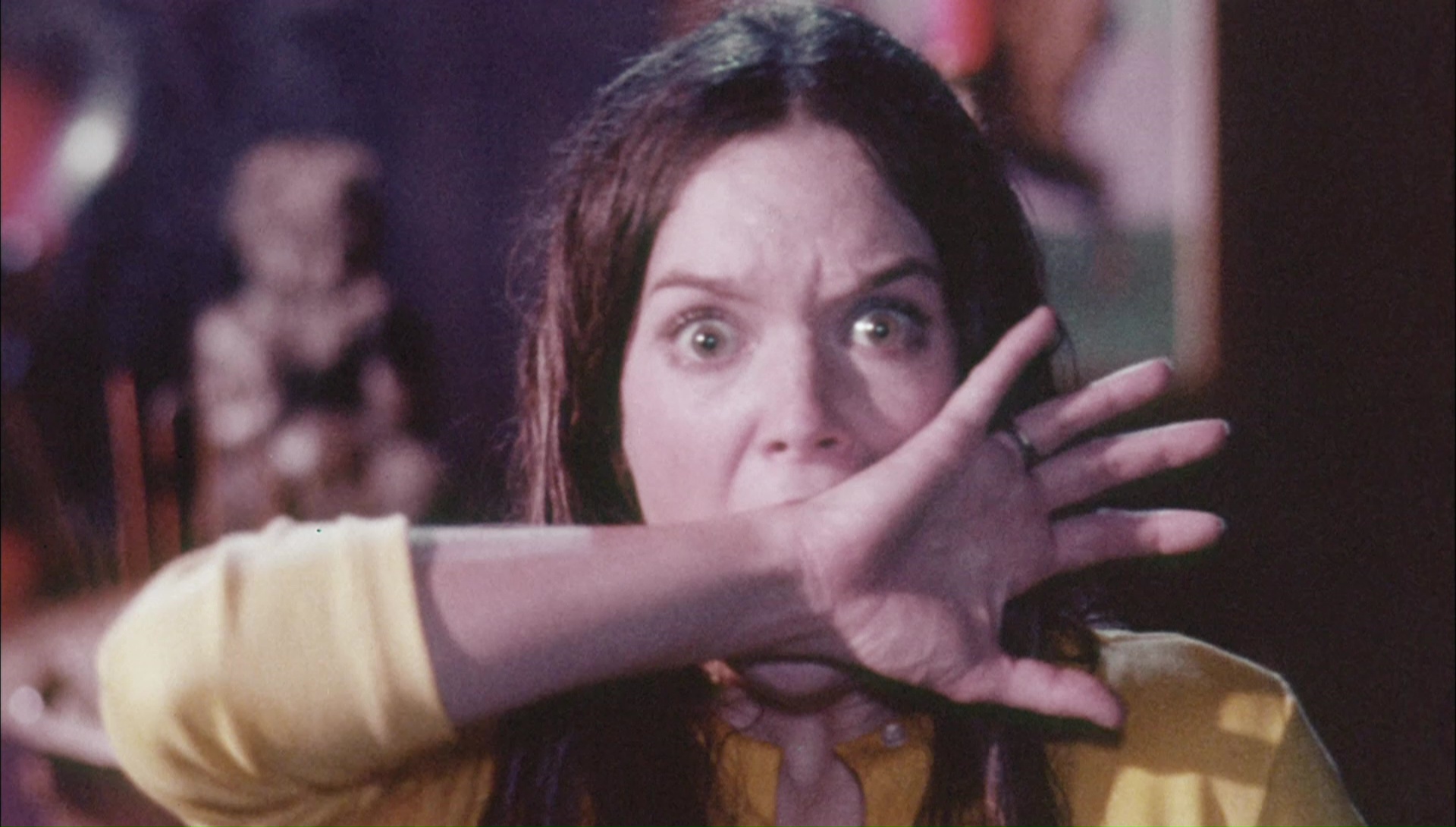 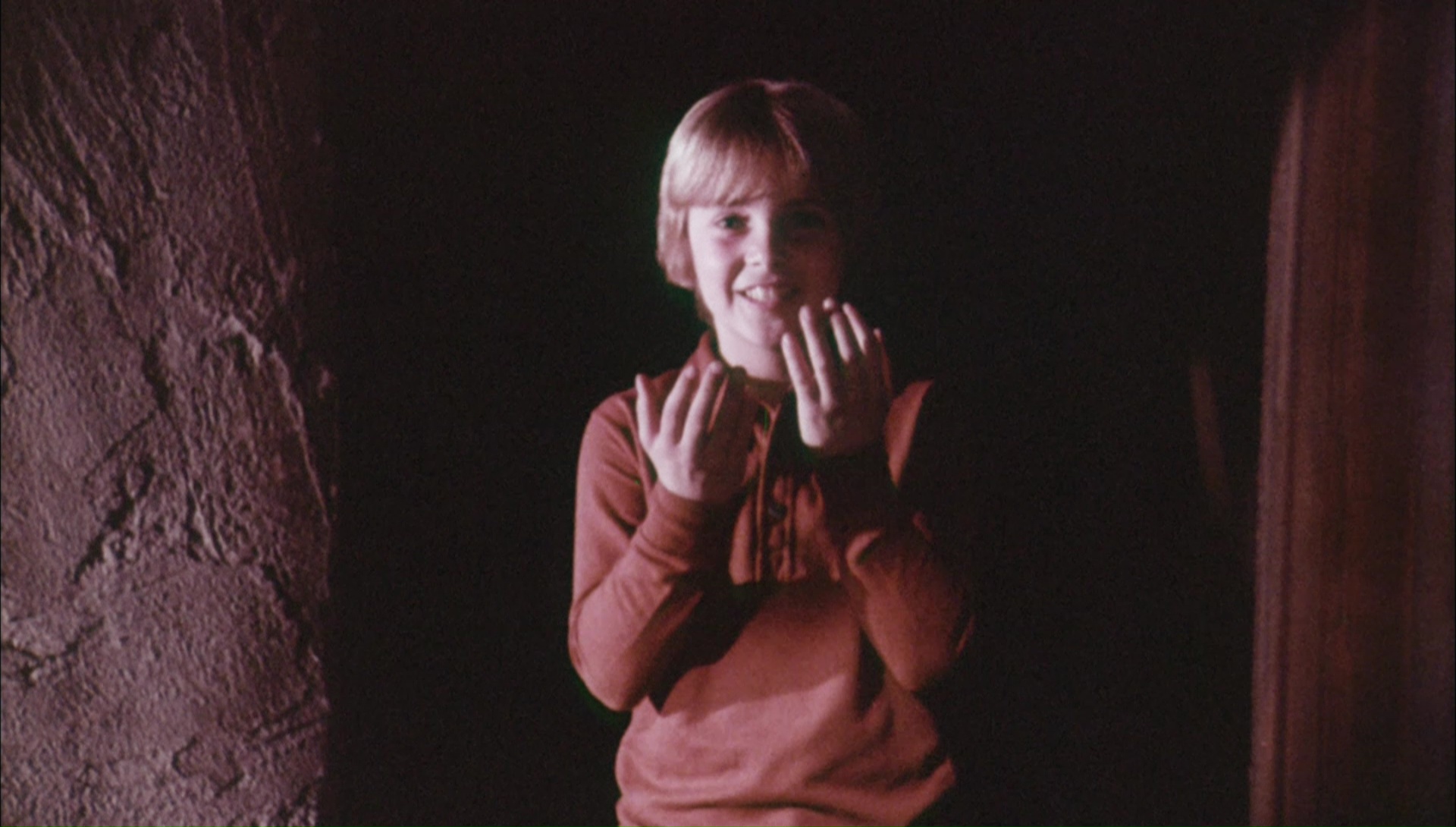 Legendary drive-in director Bert I. Gordon seemed to mainly operate in two modes: sci-fi and fantasy films about giant people and monsters (from King Dinosaur through Empire of the Ants), and twisted psycho shockers like Tormented, Picture Mommy Dead, The Police Connection, The Coming, and Secrets of a Psychopath. The latter is definitely where you can place one of his rarest productions, 1972’s Necromancy, which was given a theatrical release from Cinerama Releasing. However, Gordon’s original version was suppressed after its initial release in favor of a radically reworked version in the early ‘80s for the VHS market called The Witching, with the story severely reworked, extended scenes of fully nude coven worship added (including a young Brinke Stevens), and an entirely new, senseless ending replacing the original one. A weird hybrid version sometimes turned up under the name Rosemary’s Disciples, utilizing a cut print of The Witching but with the original Necromancy ending put back, confusing things even further. Fortunately Gordon’s original cut, one of the most tantalizing and elusive entries in his career, has finally been returned to the public via a Blu-ray release from Scorpion Releasing, a very welcome development for ‘70s horror fans.

After suffering the traumatic loss of her baby, Lori Brandon (The Legend of Hell House's Franklin, sporting a weird British-American hybrid accent) suffers from wild mood swings when dealing with her husband, Frank (Ontkean), who’s just gotten an offer to work for a occult-themed toy factory(!) in the 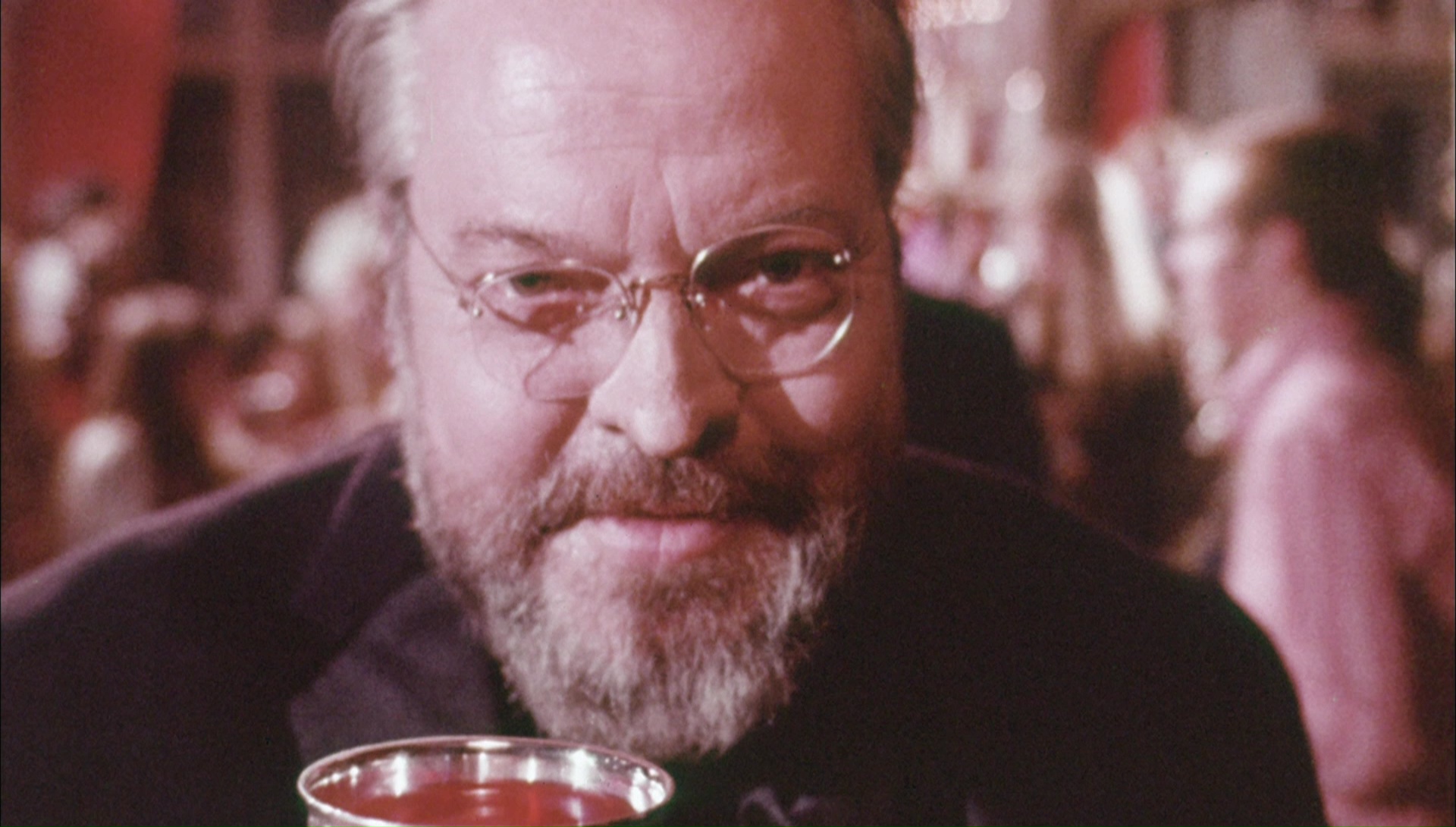 California town of Lilith. Lori helpfully notes the witch connotations of the town’s name, and sure enough on the way up the coast they’re nearly killed by a careening red car that flies off a cliff. 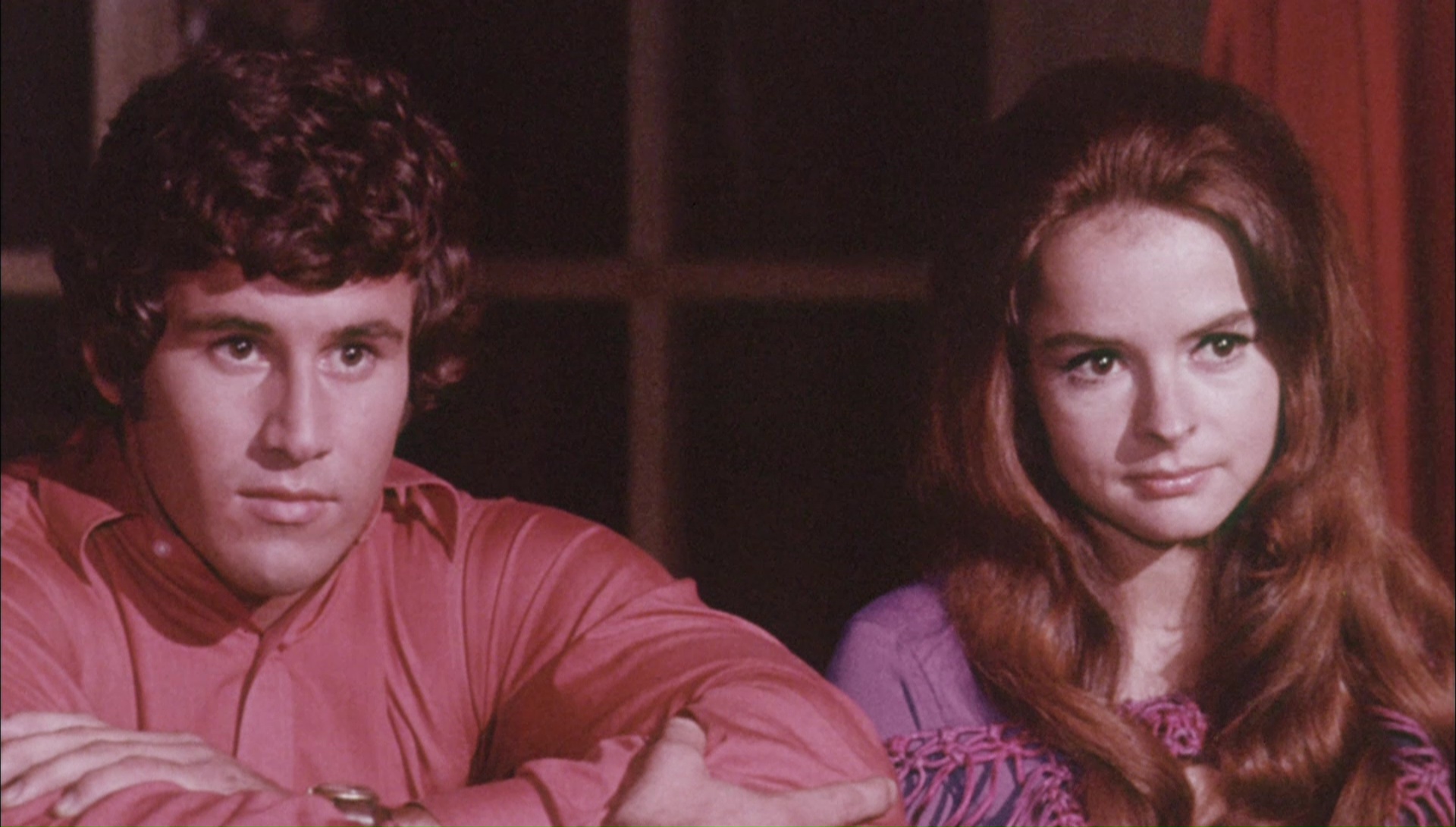 Lori plucks a fabric doll from the wreckage and notices its pockets are filled with fingernail clippings, which would normally be a warning bell to send anyone running in the opposite direction.  As it turns out, the entire town is under the control of Mr. Cato (Welles and a big fake nose), a necromancer bent on resurrecting his dead son at any cost. None of the other residents of Lilith are allowed to have children until Cato achieves his goal, and it looks like they may have plans to induct Lori as the latest member of their ancient religion.

Gordon goes for a dreamy, sinister vibe here that works much better in its original cut than the common The Witching version, which added lots of nonsense like a female ghost barking orders at our heroine. This would actually play pretty well with Halloween III: Season of the Witch from both a plot and atmosphere perspective, and it’s always fun to see Franklin strut her stuff in a horror film. Welles is clearly cashing a paycheck here, but he’s never dull  (to say the least). Also of note here is the casting of Lilith denizen Dr. Jay by Harvey Jason, who amusingly got his start in the 1964 film Lilith and married Franklin just after filming wrapped. (They’re still together, and he runs a great first edition bookstore in West Hollywood, Mystery Pier Books, where he’s happy to chat with fans.) Overall it's a deliberately paced but interesting little occult shocker that works up to a respectably nightmarish level in the final ten minutes or so, and even the hokey twist ending is pulled off with more panache than usual.

Taken from what is likely the only surviving print of the original Necromancy courtesy of the Cinerama vaults, 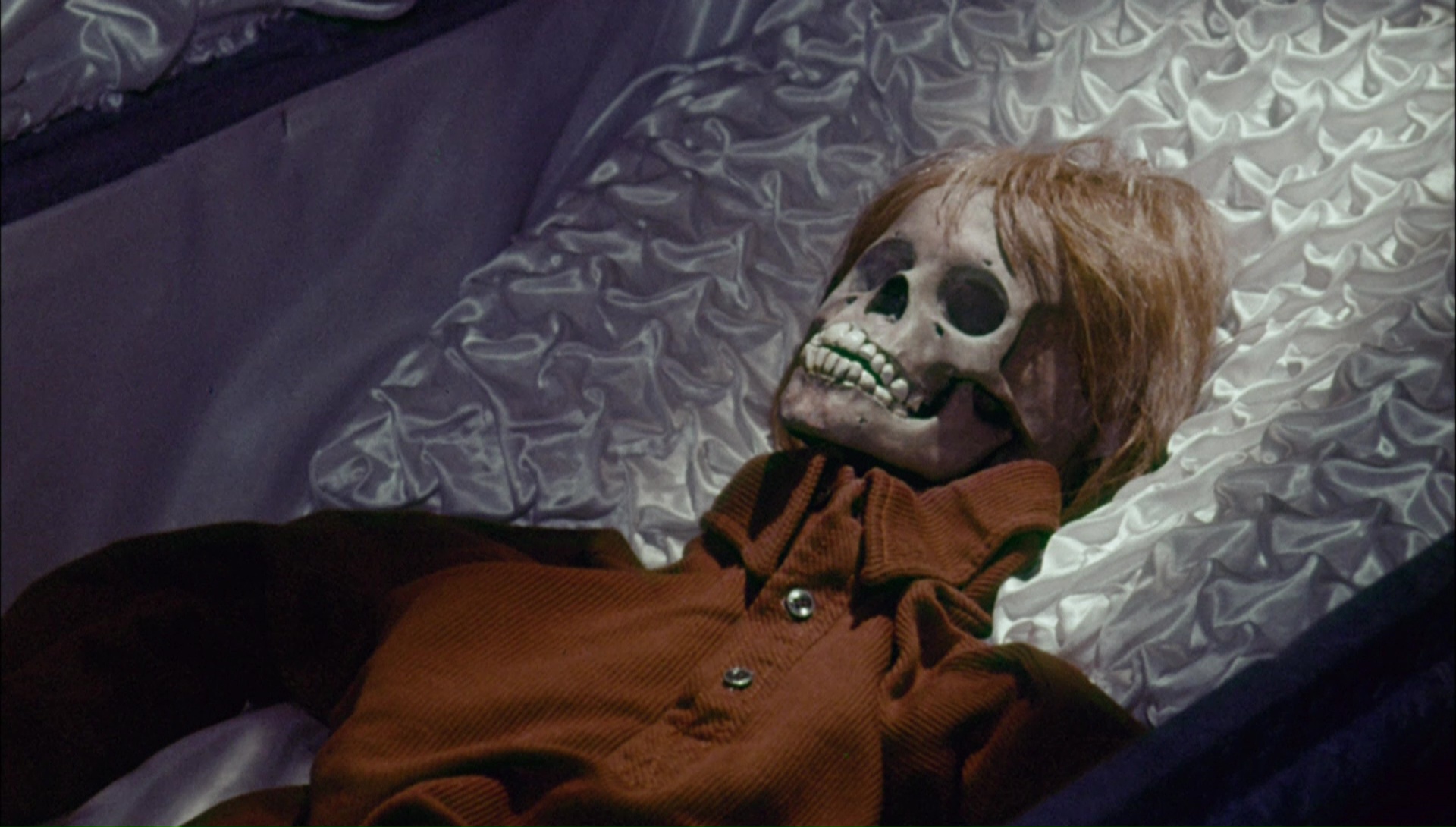 Code Red's Blu-ray (sold via DiabolikDVD.com and the label's own store but out of stock as of this writing) looks far better than any version we’ve had before. There’s some very obvious color fading here (the blues have almost gone entirely), but there’s enough left to 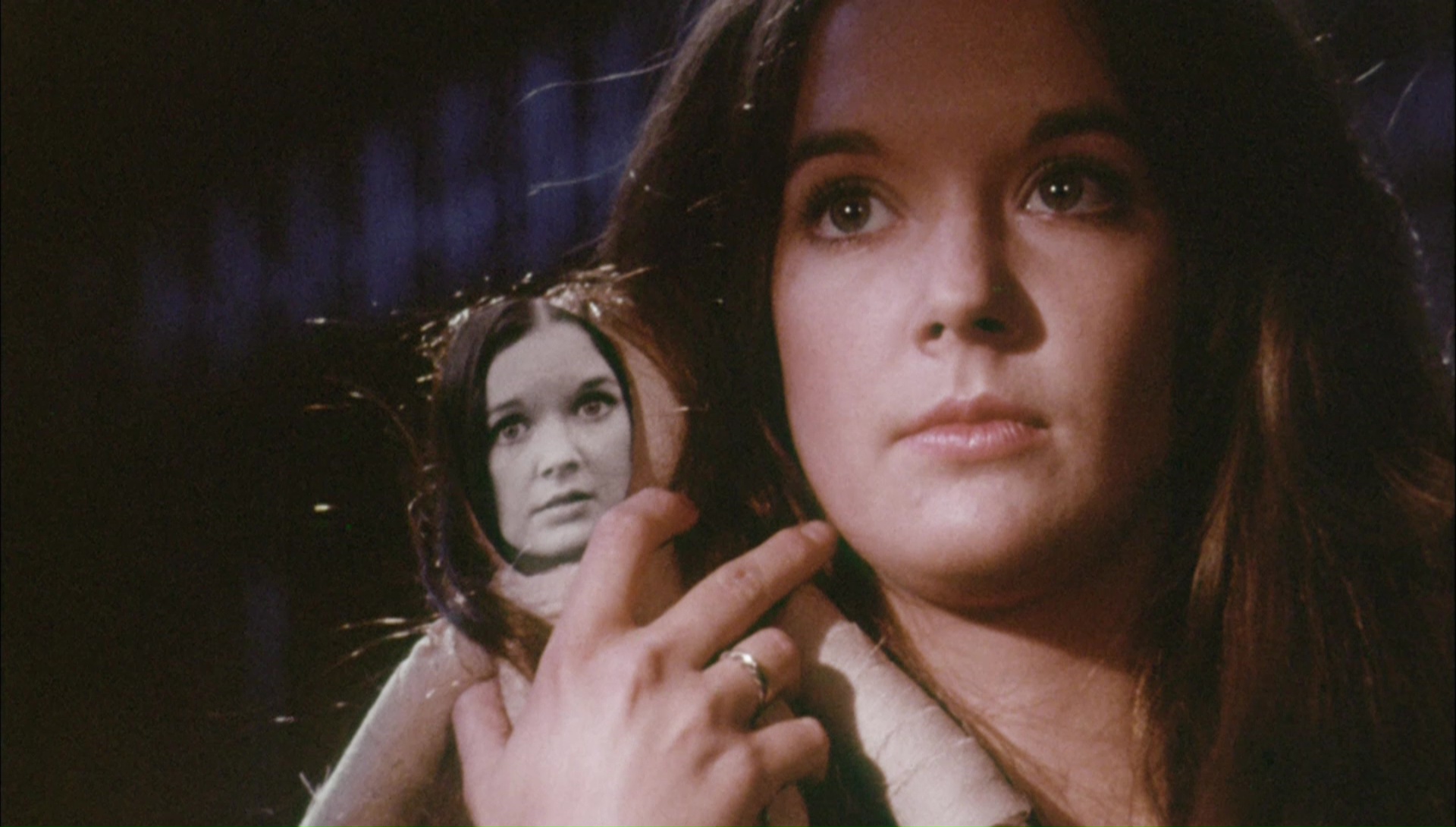 get the idea across and clearly see what's happening in the darker scenes, always a major problem before. The original dialogue recording was never the greatest (some crucial lines near the beginning are still nearly inaudible due to slurred delivery and flat recording), but the DTS-HD MA 2.0 mono presentation here does the best it can with the source. The film opens and closes with different MPAA cards, noting a PG rating at the beginning (which it bore on its theatrical release) and an R at the end. (Early promotional material bore the soon-to-be-retired GP rating, which was much more lenient with nudity and violence.) What we have here certainly feels R-rated as there's quite a bit of topless nudity on display, mainly courtesy of Faster, Pussycat! Kill! Kill's Sue Bernard but with Franklin also undraped a few times in the final act. Extras include the theatrical trailer and a fun 4-minute audio reminiscence from Franklin (accompanied by stills and poster art) in which she chats about meeting her husband during filming (the "only good thing" to come out of it), her surprise at seeing the "soft porn" reedited version on VHS, and her dislike of Welles, whom she calls "dismissive" of other actors.