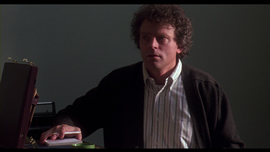 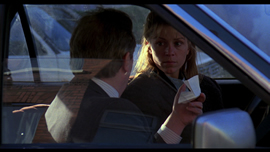 Never one to pull punches as a filmmaker, Ken Loach was firmly established as a strong dramatist with films like Kes, Poor Cow, and Black Jack when he tossed this incendiary cinematic grenade into the violent Northern Ireland conflict that made headlines throughout the '80s. Recent events suggested unmotivated violence by British authorities under Thatcher were inflaming tensions to a boiling point and formed the crux of this taut thriller, which inserts a pair of American characters into the conflict to give it some extra identifiability for overseas audiences.

After getting her start with the Coen Brothers and Sam Raimi, Frances McDormand was just starting to ascend to leading actor status when she made this back to back with other socially conscious dramas like Mississippi Burning and Chattahoochee. Here she's cast as human rights activist Ingrid Jessner, who's investigating claims of abuses in Ireland along with her boyfriend, attorney Paul Sullivan (Dourif). When tragedy strikes, British cop Kerrigan (Cox) is brought in to sort out the violence and quickly starts to feel pressure from higher ups to back off. Soon he and Ingrid have to team up to sort through the clues and conspiracies involving both British authorities and IRA members, working through a chain of pubs and offices to uncover the motive for what seems like an unnecessary murder.

The strong presence of McDormand and Cox goes a long way to setting this up as an engrossing thriller even divorced from the politics of its time, though sadly many of its concerns still remain far too relevant decades later. The performances are matched by the intelligence of the script, which allows the viewer to follow the story strands without 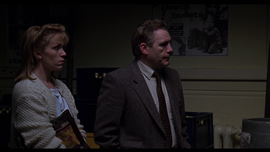 spelling everything out over and over, while Loach directs in his usual realistic, gritty style without any theatrics getting in the way. Interestingly, it also features a subdued 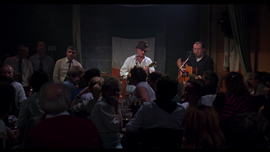 and sparing score The Police member Stewart Copeland, who was in the middle of his transition to film composer ranging from Rumble Fish to, uh, Highlander II.

Hidden Agenda was financed and released by the famously unstable Hemdale Corporation, which had only really started going after the major indie market in 1985 but would completely collapse three years after this film was released. The VHS by HBO was eventually replaced by a DVD in the early '00s when the rights moved over to MGM, who later struck a new HD master that was released almost simultaneously in the US and UK. The former one from Kino Lorber only features the theatrical trailer, while the British release from Signal One stacks up much higher on the extras front with a new half-hour interview with Cox, a 25-minute discussion with Loach and producer Rebecca O'Brien, and a very detailed, in-depth "The Guardian Interview" chat with Loach from 1992 that covers his entire artistic career and spends a lot of time on both this film and Loach's next feature, the international critical darling Riff-Raff. (The trailer is included on this release as well.) The two new pieces are especially fascinating as they take a more distanced look at the political climate when this was made and talk about the film's stormy release in the UK, which understandably hit a raw nerve and set off some very diverse reactions from the public and press. Both releases are culled from the same excellent master retaining the film's shadowy look (which sometimes feels influenced by Alan J. Pakula), though the UK disc pumps up the bit rate quite a bit higher and features a somewhat more textured presentation with a hint more depth throughout.