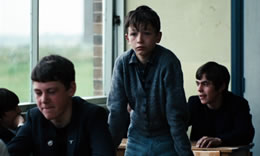 An unforgettable snapshot of grim '60s everyday life in Northern England, Kes has long been a watershed film for many British viewers but, until Criterion's presentation, has remained extremely difficult to see in America outside of rare TV airings or import DVDs, without even getting the benefit of a legitimate theatrical release. Director Ken Loach, arguably the most important social realist director and certainly the one with the longest career, made a breakthrough with this film shortly after his promising Poor Cow, and while it took several years for him to make another film that approached this one in magnitude, even by itself Kes would be enough to assure him permanent standing as a major name in filmmaking.

Young Yorkshire boy Billy (Bradley) has little to look forward to when he grows up as almost every male winds up working in the hell of the local mines, but in the meantime he has to endure the day-to-day existence of his school and his home life, where his older brother (Fletcher) dominates his every move. Just at the age where he can voluntarily drop out of the country's class-biased educational system, he finds a hawk's nest while out exploring one day and takes one of the fledglings which he names Kes and trains as a pet with the aid of a book. Kes soon comes to represent a hopeful outlet in Billy's situation, though this being a grim realist film, you know their happiness is going to have an expiration date. 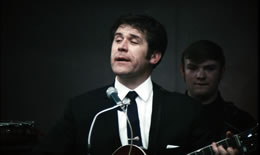 Though the subject matter isn't exactly upbeat, Kes is a very humane and often quite humorous film with a stunning central performance from Bradley, a real working class kid and miner's son who went on to a long acting career (later credited as Dai Bradley) including Zulu Dawn and a wonderfully twisted performance in Absolution. This was also the first feature for composer John Cameron, a name well known to fans of '70s stock music, who went on to The Ruling Class; his spare but haunting score is noteworthy in an of itself and features some solid British music talent including Harld McNair on flute. The screenplay was adapted by writer Barry Hines from his novel A Kestrel for a Knave, and aside from this film, he's probably best known for the harrowing 1984 made-for-TV nuclear fallout saga, Threads, which makes this film seem like a rollicking romantic comedy in comparison. 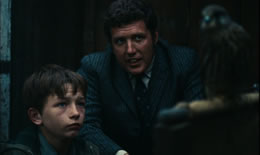 Anyone who wanted to see Kes most likely had to make do with MGM's Region 2 release on DVD, a non-anamorphic 1.66:1 version that was thrown out with as little effort as possible on the European marketplace. Criterion's US version on DVD and Blu-Ray is a godsend in many respects, as it offers a greatly improved HD transfer that drastically improves the clarity and color fidelity in every way. The film still looks appropriately rough and rusty where it should, but the bump in quality is enormous. Interestingly, their release includes the original theatrical dialogue track with thick Yorkshire accents and an alternate "international" track (a la Trainspotting) with much dialogue relooped to make it more intelligible. Luckily there are also optional English subtitles, so you can watch it as originally intended while still understanding what on earth everyone's talking about. As for extras, you get the terrific new "Making Kes," a 45-minute featurette featuring Loach, Bradley, director of photography Chris Menges (who went on to shoot one of the most beautiful films of all time, The Mission), and producer Tony Garnett; Loach gets the lion's share of the screen time for the first third and has some interesting stories, but Bradley (who comes in past the halfway point) gets the best moments as he talks about the falcon training he went through for the film and his feelings about using untested talent on the film. Also included a 1993 South Bank Show episode about Loach (who talks about his films and is joined by directors Stephen Frears and Alan Parker, among others), as well as Loach's first pivotal work, the 77-minute "Cathy Come Home" from 1966. Originally produced for the BBC's The Wednesday Play, it's a very spare and unflinching look at English lower class life and the perils of losing one's meager physical possessions; apparently it caused such a stir that the country's homeless laws were drastically modified soon after its airing. Film writer Graham Fuller provides an afterword as well and contributes liner notes for the booklet enclosed with the disc. It certainly took long enough for this essential piece of British film history to officially reach American shores, but the wait was worth it.