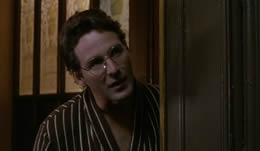 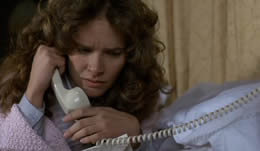 ker Tree. What we have here is an Irish thriller about Patricia (Harris), a country teacher who moves to Dublin where a serial killer is delivering flowery messages to his targeted victims. Meanwhile two men enter her life, colleague Robert Foxley (Kavanagh) and the married American writer living upstairs, Danny (Bottoms), who puts on funny accents while calling his wife and plays games by having Patricia hide coins in her underwear. Then there's the police inspector (Cazenove) on the case, who has a few kinks of his own. Can she figure out who's responsible before she becomes the next victim?

While most films would go the usual route of using the heroine's situation to escalate tension as she's stalked throughout the film, The Fantasist goes the odd route of using local color and bizarre character behavior to propel the story inside. It's very, very Irish throughout, and you get lots of scenes in pubs (and a "where did that come from?" appearance by '80s pop group Level 42). The acting is a peculiar mishmash of styles, with Bottoms (who's prone to wearing silly hats) offering what might be h 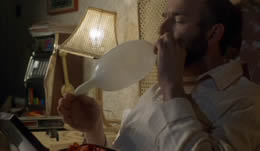 is weirdest performance and the actors rattling off banter about everything from vegetables to bird watching to wine tasting. Sure, you get a few nods to thriller conventions like our heroine scrabbling across a rooftop and a final confrontation with the killer (who plays patty cake on her bare posterior in what must be a cinematic first).

Former Steppenwolf Theatre alumnus Harris (who's been married to Gary Sinise for years and now uses his last name) makes for a reasonably cute and sympathetic lead going through a very peculiar sexual awakening, and among the male cast, Cazenove (from TV's Dynasty) easily fares best (though he had just done some h 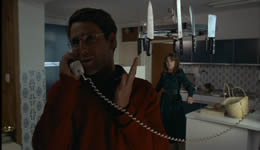 is best work the year before opposite Carol Lynley in the great "In Possession" episode of Hammer House of Mystery & Suspense). Though the soundtrack can't hope to touch The Wicker Man (how could it?), the score by Russian-born Stanislas Syrewicz is a pleasing bit of Gallic musical accompaniment foreshadowing his Scottish-themed work two years later on Ken Russell's Lair of the White Worm.

Despite the financial backing of ITC and the growing cult around the director's prior film, The Fantasist didn't really get much of a theatrical push anywhere (probably because it's far more of a cult curio than a real thriller) and was shipped off straight to video, with a fetishistic VHS cover usually populating the mystery/suspense area of video stores for years. It basically vanished after the mid-'90s, finally resurfacing in 2006 in the UK on DVD from Network. It took several more years, but the 2012 American DVD from Scorpion marks its eventual return to Yank audiences with what appears to be a time-corrected version (no more PAL speedup) from the same source based on the identical 1.75 framing, which looks opened up a bit compared to what would have been an intended 1.85:1 in theaters. In any case it works fine compositionally, and the mono audio sounds fine given the modest nature of the source material. The title is fittingly presented as part of the label's Katarina's Nightmare Theater line, with hostess Katarina Leigh Waters bookended the film with optional segments in which she playfully riffs on the pesky phone calls in the film (this time with ridiculously silly new voiceovers) and offers a rundown of facts about Hardy and the cast. Extras include trailers for Death Ship, Nothing but the Night (appropriately), The Devil within Her, Double Exposure, The Hearse, Satan's Slave, and The Survivor.