The third and most divisive horror offering from New Jersey director Dante Tomaselli, Satan's Playground finds him diverging from the free-associative funhouses of his prior films and going for a more linear, traditional scarefest based around one of his stomping ground's most enduring legends, the Jersey Devil. Of course, it helps if you're somewhat familiar with the background of that supernatural entity (which also inspired the wildly erratic but interesting The Last Broadcast), as this particular twist essentially offers three different spooky threats to its lead characters but only barely attempts to connect the dots for the unfamiliar. 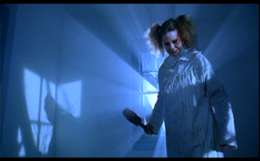 Drawing '80s horror inspiration right down to its casting, this outing stars Felissa Rose (the notorious "Angela" from Sleepaway Camp), who also had a small role in Tomaselli's Horror, and The Evil Dead's tree-assaulted Ellen Sandweiss as two members of a family driving through the desolate Pine Barrens along with an autistic teen son (Lopes), and Sandweiss' much older husband (Piro), not to mention a little baby for some additional potential trauma. Naturally their car gets stuck in the middle of nowhere, and we know the area's being stalked by some sort of flying, slashing thingy thanks to a prologue involving a hapless traveler getting mauled in the woods. One by one they get separated as they look for help, either running afoul of a nefarious, hooded cult lurking in the hinterlands or the sole residents nearby, a grotesque clan run by creepy old Mrs. Leeds (St. Paule) in a ramshackle, spooky old house. Will any of them escape alive, and more importantly, when will that pesky Jersey Devil show up to start slashing up a few throats? 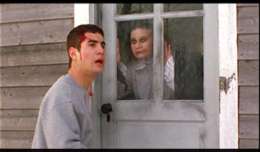 Obviously aiming at something more escapist and accessible, Satan's Playground looks considerably slicker than his past two films and boasts some fairly strong performances, notably Rose and Sandweiss of course, with Tomaselli regular Christie Sanford scoring the most indelible impression as a hammer-swinging psycho with a highly unusual hairdo. Oddly, the one who fares worst is Lopes, normally the director's leading man, who has no dialogue and basically drools a lot before exiting the film in the most inexplicable of its many death scenes. Also unusual this time out is the stronger injection of black humor, which balances out some of the wilder curlicues of the plot. Along with the casting of its two female leads, Tomaselli makes a few other unexpected nods to classic '70s and '80s horror staples, most obviously The Evil Dead (the swooshing Steadicam monster, the spookhouse cabin, etc.) as well as atmospheric nods to the likes of The Texas Chainsaw Massacre and even what looks like a deliciously stylish homage to Bloody Pit of Horror. The gore here is fairly restrained, limited to a few cracked noggins and one showstopping climactic bit involving a great throat-splitting effect, but the well-paced jolts generally pay off; the only major misfire, alas, is the final shot, an attempt at a Raimi-esque jolt that lands with a thud. Interestingly, the end result divided the critical and fan community, earning surprising raves from Variety and Slant while a puzzling war appears to be waged against it at the Internet Movie Database. As usual, the truth is somewhere in between; horror fans willing to overlook budgetary limitations and the occasional narrative stumble should find enough chills here to merit an evening's viewing, while those who chafed at Tomaselli's more oblique directorial choices in the past should find it interesting to see him tackling a more straightforward project with traditional, bare-bones scares.

Anchor Bay's DVD marks a distributor switch for Tomaselli and represents the most thorough treatment of one of his works to date, with more projects in the pipeline. The film looks terrific considering it cost somewhere in the neighborhood of half a million to shoot, at least according to the supplements. Speaking of which, the disc comes packed with a heavy amount of extras, kicking off with a Tomaselli commentary covering the shooting (it was done on Super 16 and makes the format look as slick as possible), the meager financing, his relationships with actors both old and new, and his own artistic intentions with this film. Much of this material dovetails with the two featurettes, "The Making of Satan's Playground" (basically ten minutes of behind-the-scenes footage) and "Dante Tomaselli and the Jersey Devil," which finds the shades-sporting auteur talking about his personal fascination with the titular demon and how it blossomed out into the full premise of the film. Also included are a teaser and theatrical trailer, a still gallery, and promo trailers for other low budget Anchor Bay titles like Hatchet.

Outside a snowy farmhouse, a young girl, Grace (Mahon), burns her hand while hanging up Christmas lights, then gets spooked by a sinister-looking goat standing near the woods. While running inside, she's suddenly accosted by a demonic-looking man in preacher's garb. Cut to a van carrying a group of teens

just escaped from rehab after accidentally shooting one of the guards. The driver, Luck (Lopes), steers them into the country to the home of a drug-pushing preacher, Salo (Vincent Lamberti), the same kidnapper from the opening scene. Upon arrival they discover Grace, who is actually Salo's daughter and is living in mind-controlled captivity under the watch of her father's creepy satanist wife (Christie Sanford). Hallucinatory terrors are immediately unleashed, including more goat appearances, a melting doll, flashbacks (or visions) involving Salo's spiritualist father (the Amazing Kreskin), a horde of shuffling zombies, torture on a rack, blood vomiting, and jack-o-lantern acid trips.

This ghoulish, stream-of-consciousness freak-out on film from Desecration director Tomaselli is even more disorienting than his first effort, and its refusal to play by the narrative rules may result in more than a few viewers scratching their heads or staring at their DVD player in confusion. However, more adventurous souls with a taste for the surreal will find plenty of juicy material here as the story giddily skips from one gothic image to another with only the thinnest of connective narrative tissue. Tomaselli certainly has his visual skills down pat, with the evocative snowbound setting evoking obscure '70s chillers like You'll Like My Mother, while the more outrageous flights of fancy include some absolutely nightmarish visuals of Sanford (in a genuinely skin-crawling performance) looming towards the camera with a devilish grin on her face. That's really how most of the film works; it creeps

you out way under the skin if you let it, even though the reasons why may not be immediately clear. This isn't a "scary" movie in the way many audiences now regard the term; this is much closer to Jodorowsky and David Lynch than Wes Craven. That said, after these outings it would be interesting to see Tomaselli cutting his teeth on a script with a co-writer; his baroque visual talents would be interesting to see melded with a less personal storyline that could be devoured by a wider horror audience. At least his sense of narrative control is obviously being refined, as Horror closes with a deliberately open but tantalizing final scene more effective than the nihilist dead end that closed Desecration.

Elite's special edition of Horror includes several worthy extras, kicking off with a Tomaselli commentary track in which he excitedly discusses the process of creating and shooting the film without giving away too much in the way of a literal reading of the story. Other goodies include an extended Horror trailer (really more of a promo reel), a Desecration trailer, a sometimes

hilarious still gallery with plenty of FX shots, footage of the Amazing Kreskin performing his feats on the set (which brings to mind the hypnotism performed on Werner Herzog's Heart of Glass), a 10-minute reel of behind-the-scenes footage, and a snippet from the original Desecration short film (different from the one included on the DVD for that feature).

As for the film itself, the transfer is a bit problematic; shot on Super 16, the overall appearance is usually fine with sharp but deliberately grainy detail. However, there's also a substantial amount of chroma noise visible on some white, cream and yellow areas; fortunately the snowy scenes are largely unaffected, but bright doorways and lightbulbs jitter with colorful video noise. Perhaps this was an intentional effect as the flaw is wildly inconsistent, but whatever the reason, it's an unfortunate distraction. Audio is solid, boasting a Dolby Digital 5.1 track that's only marginally more aggressive than the already paranoia-inducing 2.0 mix on Desecration. Split surrounds are very limited but overall the ambience is spacious and contributes greatly to the film's mood of unease. Watch it alone in a dark room with rear speakers nearby, if you dare.