The Hollywood ghost story has been around almost as long as the industry itself; witness such navel-gazing efforts as The Legend of Lylah Clare, the classic Twilight Zone episode "The Sixteen-Millimeter Shrine," and from a certain perspective, even 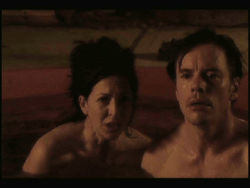 David Lynch's Mulholland Drive. Adding a new wrinkle to the tradition is the indie chiller The Ghosts of Edendale, a solo directorial outing for The Last Broadcast co-director Stefan Avalos. A significant improvement over its predecessor, this combination of traditional campfire-style storytelling and a scrappy, low-budget take on Hollywood soul-sucking offers solid chills and enough striking, tastefully handled effects to make it worth seeking out.

Our story begins with young couple Rachel (Ficara) and Kevin (Wastell) moving into a furnished home in Edendale Place, a hilly Los Angeles subdivision. Populated by quirky personalities who all work "in the business," the neighborhood is obsessed with film careers: head shots, homemade mixing studios, and screenplays in the works. Recovering from a nervous 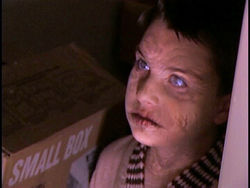 breakdown, struggling actress Rachel is startled when she sees the ghost of a young boy while moving boxes but writes it off as a pesky hallucination. Gradually they learn that Edendale was once a thriving center of moviemaking in the silent era, but a curse has hung over it since the death of cowboy actor Tom Mix in the area decades earlier. Worse, Kevin's personality begins to change as he obsesses over his latest work, a western, instead of the new house and hot tub he should be enjoying with his wife.

Though marked by some of the usual digital-video bugaboos and some uneven acting, The Ghosts of Edendale uses its slow, Polanskian pace to good effect and deftly works Hollywood history and previous horror influences (The Shining, Let's Scare Jessica to Death and Invasion of the Body Snatchers are the big points of reference here) to good effect. The two leads are generally very good, but they're upstaged by the ghostly visions which culminate in a nightmarish finale that effectively brings celluloid characters to life throughout the neighborhood. Most wisely, Avalos avoids the pitfalls of that irritating modern horror Achilles heel, the gratuitous twist ending (which unfortunately sabotated The Last Broadcast); here the story draws gradually to its logical, creepy conclusion and keeps things clean and simple. 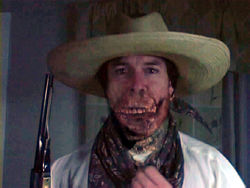 Along with a nice transfer of the film itself and a suitably jolt-filled 5.1 audio mix, the Lightyear DVD includes an audio commentary with Avalos and producer Marianne Connor in which they discuss the elaborate process of mounting the film, how the effects were created, and the various methods used to create atmosphere on a minimal budget. Also included is an isolated 5.1 mix of the isolated music track with occasional interjections from composer Vincent Gillioz. Optional subtitles in English, Spanish and French are also included.

The extras section kicks off with a behind-the-scenes production featurette focusing on raw footage of the crew at work, "Behind the Special Effects" (a look at the digital trickery used to create the spirits including lots of green screen work), "The Remaking of Scene 125" (alternate takes of a ghost-by-the-shower scene), seven deleted scenes (mostly alternate and extended versions) with optional director's commentary, a red-band trailer that spoils many of the visual highlights, and a gallery of effects production artwork.

Another installment in the "reality or not?" school of horror filmmaking, The Last Broadcast follows in the footsteps of Cannibal Holocaust, Man Bites Dog, etc., as it presents a fictitious investigation into the deaths of two public access TV producers in the middle of the New Jersey Pine Barrens. Deriving most of its notoriety from supposed similarities to the later The Blair Witch Project, this film (to use the term loosely - it was shot mostly on video equipment) only resembles that brilliantly marketed cash cow in terms of its basic setting and premise. While Blair Witch aspires to be little more than an imaginary (and not all that compelling) campfire tale, The Last Broadcast attacks its subject as a satire of modern "homemade" journalism and the public's fascination with "reality-based" TV shows that turn out to be anything but.

Few seem to agree which film is better, but at heart, both are essentially ambitious, low budget experiments crippled by deeply flawed executions.

Structured as a television documentary, The Last Broadcast presents a reporter/filmmaker (David Beard) deconstructing the mystery behind the deaths of Stefan Avalos and Lance Weiler, the hosts of Fact or Fiction?, a basement TV production devoted to local urban legends. The murders were pinned on Jim Seward, a mentally unstable young man who monitored the Internet Relay Chat during what was supposed to be a live broadcast concerning the mythical Jersey Devil. Compiling interview footage intercut with the actual "last broadcast," the story coils tighter as the horrific truth begins to emerge, and nothing is what it seems.

First of all, is The Last Broadcast frightening? Well, yes, in a way. There's a devious, sneaky imagination at work here, and a sequence near the end detailing the reconstruction of a damaged videotape generates some deep, palpable chills. More often, though, it's fascinating as a face-slapping answer to the Hard Copy mentality of the '90s and strikes pretty deeply at the modern standards of American journalism. Unfortunately, the creators throw most of their good work out the window during the last five minutes; frankly, it's hard to imagine a worse possible ending. The concept behind the ending is fine (though filled with plot holes), but its execution is so clumsy, jarring, and ineptly handled that most viewers will either be shaking their heads or laughing in confusion. This major flaw aside, the other 80 minutes provides some worthy food for thought and at least merits a rental.

Projected digitally rather than screened as a piece of celluloid, The Last Broadcast obviously makes for a somewhat unorthodox DVD experience. The video quality ranges from deliberately fuzzy and pixellized (the Fact or Fiction? excerpts) to clear and vivid (the interview footage). Despite the potential for added clarity, the disc looks about the same as the VHS tape, which was first issued as a limited edition through Amazon. In the end, it's really no better or worse than watching a television broadcast. Considering the low price, the DVD packs in an admirable number of extras, including director's commentary (almost entirely technical, but interesting), some "trailers" (for lack of a better term), behind the scenes footage showing how the project was composed and edited, and a mini-documentary on the Jersey Devil, which is never really defined in the actual film. While Blair Witch may have drawn inspiration (ahem) from The Last Broadcast, the reverse is apparently true for the DVD, which closely resembles Artisan's presentation. Far more money probably went into the DVD than into the actual film, which really says something about filmmaking in the '90s. In any case, The Last Broadcast offers a solid, well-chosen package of extras, and an occasionally creepy little movie to boot. See it... if you dare.