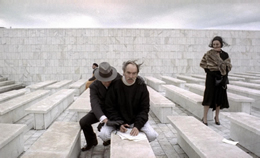 A regular choice on lists of the finest international films ever made, The Conformist marked a major international 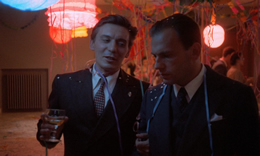 breakthrough for director Bernardo Bertolucci (following acclaimed art house fare like Before the Revolution) with a hail of critical praise and solid major city releases courtesy of Paramount Pictures in America. The film also laid the groundwork for his two other major masterpieces in the '70s, Last Tango in Paris and especially the epic-length, highly political 1900, with the director's fine aesthetic sense and not terribly subtle leftist politics coalescing here in perhaps their most effective form.

In the midst of a bizarre but wonderful period that ranged from Z to The Libertine, popular French export Jean-Louis Trintignant stars as Marcello Clerici, who has decided to move along with the social flow of Italy in the late '30s by becoming part of Mussolini's secret police squad. The spread of fascism leaves him unaffected as he embarks on his honeymoon with his new wife, Giulia (future Tinto Brass star Sandrelli), who has no idea he's using the trip as a cover to assassinate his favorite college instructor, Professor Quadri (Tarascio), an intellectual leftist. The reunion of the two men has the unexpected consequence of introducing him to the professor's beautiful younger wife, Anna (Sanda), who comes to play a pivotal role in his plans and his life. Incapable of confronting the status quo and locked in conformity through issues involving his sexual orientation and a violent past trauma, he soon finds that history has other plans in store no matter how much he tries to do what's expected of him. 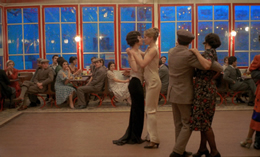 In addition to serving as a fine showcase for Bertolucci's greatest strengths (still not quite 30 years old at the time), The Conformist also turned out to be a terrific calling card for young cinematographer Vittorio Storaro, who shot this back to back with The Bird with the Crystal Plumage and later made a splash in Hollywood with films like Apocalypse Now and Reds. On top of that you get a fine if unusually chilly score by Georges Delerue and striking production design by Ferdinando Scarfiotti, who creates a chillingly austere, steely visual representation for fascism and whose work here has been singled out many, many times by his successors as an influence.

The Conformist first appeared on DVD from Paramount in 2006 with a nice, colorful transfer about on par with the studio's other transfers of the period; as far as mid-'00s standard def transfers go, it's still respectable if not dazzling. The film's original language track is a fuzzier issue than you might imagine, since Italian and especially multinational productions like this (made between Italy, France and West Germany) often turned into a hodgepodge of different languages spoken on set and in front of the camera. The English dub (the one seem in most U.S. theatrical screenings and on VHS) was no great shakes, but it did a reasonable job of approximating the actors' performances even with voices that usually come off as flat. The Italian track (included on the DVD along with audio in French, Spanish, and Portuguese) is better and certainly feels more authentic, though only Sandrelli's lip movements match throughout with Trintignant sometimes approximating an Italian line reading and other times matching no version at all. In any case, you might as well watch it in Italian with English subtitles as it's the best possible option. That disc also contains a Laurent Bouzareau-produced doc (split into three parts, as usual for Paramount) with Bertolucci and Storaro reminiscing about the production. 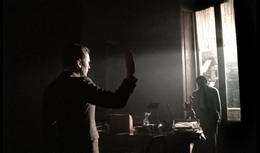 In 2012, Arrow Films in the U.K. debuted the film on Blu-ray after a much-touted film restoration had already bowed in Italy. That didn't appear the same source as the HD master used thor that disc, which is unquestionably a bump up over the DVD with lovely, vibrant colors but still has a fairly chunky-looking, flat appearance. The Italian and English dubs are included in LPCM mono with optional English subs, and extras include a solid commentary by Italian film professor and writer David Forgacs, a useful 50-minute "Bernardo Bertolucci: Reflections on Cinema" featurette with the filmmaker discussing his body of work, and a liner notes booklet with an essay by Michael Atkinson and vintage Bertolucci comments about the feature. Incidentally, this release and all of the others clock in around 112 minutes (with slight variations due to studio logos); other running times have been reported over the years due to the exhibition methods in Italy, which often included an intermission and exit music.

In 2014, the much-touted film restoration supervised by Bertolucci and Storaro debuted in HD in the U.S. from Raro with a Blu-ray along with a DVD reissue. The opening titles are still heavy with opticals and will likely remain problematic forever, but after that it's pretty smooth sailing with a lovely, engrossing transfer featuring some colors so intense they'll often make you lose track of the plot. No other film uses blue quite like this one, so newcomers should prepare for a wonderfully intense experience. Highly recommended. The vital Italian and English tracks are included here with subtitles, both sounding quite fine.

The main video extra here is "In the Shadow of The Conformist," a 57-minute video essay of sorts built around a 2011 interview with Bertolucci about how to the film sprang from his previous work and reflected the political and artistic currents of the era. Also included in battered condition is the original Paramount trailer; the 2014 reissue trailer indicated on the packaging appears to be nonexistent. The somewhat fragmented liner notes booklet pulls together an extremely academic essay by Emiliano Morreale, a selection of reviews from the initial release, a Bertolucci bio, and archival reflections on the film by participants like Sandrelli and Storaro.