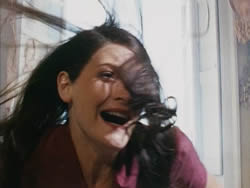 The TV horror anthology has proven to be a surprisingly sturdy beast, popping up at least a few times each decade even when fans give up hope of ever seeing one again. Sure, there are the famous ones like Thriller, Night Gallery, Tales from the Crypt, and Masters of Horror, but a close eye can also lead to lesser-known shows l 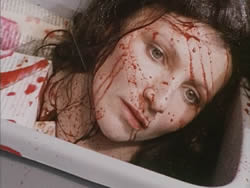 ike Nightmare Cafe, Hammer House of Horrors, Night Visions, Darkroom, and Fear Itself, to name just a few. To that latter category you can also add Chiller, a five-episode series from 1995 made for British television by ITV. Each episode clocks in just over 52 minutes, providing supernatural modern stories with an emphasis on ghosts, plot twists, and frequently nasty (or at least darkly ironic) ends for most of the characters.

The first story, "Prophecy," concerns a group of friends who, out for a drive at night, find refuge in the abandoned Luigi Cafe and start exploring the basement. There they decide to hold a seance where a supernatural voice speaks the phrase "I shall not altogether die" in Latin, offering a prophecy of their impending grim fates. Some time later, they start dying off in random, violent accidents, such as being run over by a bus and turned into a bloody mess in the middle of a fruit stand. (There's a lot of vehicular mayhem in this one.) Somehow it's all linked to a kid named Edward who keeps having visions of the future and a perverted, long-dead marquis who engaged in satanism and wrote books on human skin. Basically a forerunner to Final Destination, this is an entertaining excuse to wipe out a string of cast members (including an unintentionally amusing bit involving an elevator shaft) as the nominal heroine, Franny (Ward from Young Sherlock Holmes), tries to sort out all the paranormal clues. The production values here are surprisingly high, with lots of different London locations and a pretty impressive bit of building destruction during the climax. That said, the script really flies all over the place and often doesn't make a whole lot of sense, requiring the view to connect a lot of dots to get to a very subdued twist ending. 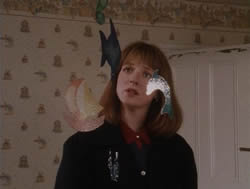 The second episode, "Toby," is a much simpler and creepier piece of work as it follows a married art teacher, Louise (GoldenEye's Gordon), who loses her unborn child in an accident (caused by misbehaving cats) and tries to overcome her grief with the help of her husband, Ray (Doc Martin's Clunes). Soon spooky sounds are coming from their unused nursery, and Louise seems to be pregnant again... except there's no baby inside her. As her symptoms increase, she comes to realize that Toby, the child they lost, may be coming back to haunt them. The two strong lead performances really anchor this one, which manages to spin some real chills from potentially silly material (including a quick detour into Eye of the Cat territory during the climax). Fun stuff, and possibly the best starting point for those new to the series. 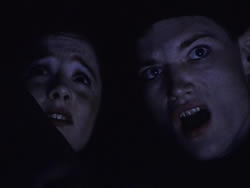 Next is "Here Comes the Mirror Man," in which a homeless young man named Gary (Life on Mars' Simm) hides out in an abandoned church where a dark-haired man named Michael (The Angelic Conversation's Reynolds) seems to be responsible for vandalism and mischief in the area. However, it sure looks like Gary pushing his current social worker in front of a truck, which crushes her head. (Seriously, this show just loves running over people.) Enter a new social worker, Anna (Logan), who's looking for Michael for reasons not immediately apparent. As she soon begins to realize, she might have stepped in way over her head. You can easily see where this one's heading very early on, but as a dark character study it works fairly well and has some solid atmosphere courtesy of the grim Yorkshire settings, especially that church. Now a busy and respected TV actor, Simm is easily the best thing about it and manages to wring more layers from his character than the script probably provided. 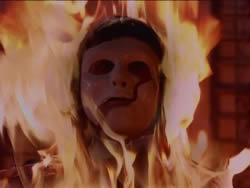 Episode four, "The Man Who Didn't Believe in Ghosts," is another variation on that old chestnut, the skeptical nonbeliever who comes to find out how very, very wrong he was to doubt the supernatural. Here our case study is Dr. Richard Cramer (Egan), seen dismissing ghosts on Yorkshire TV by demonstrating a spirit box (after a brief but effective prologue in which a woman hurtles from the roof of a mansion into a greenhouse while her leg is tethered to a rope). After suffering a heart attack at the end of the show, he decides to move out to the countryside with his wife, Emma (O'Neill), and their son. They settle on Windwhistle Hall, where initial disturbances like problems with the pipes turn out to have a perfectly rational explanation. However, things gradually get far more uncanny thanks to freezing rooms, unseen intruders in the office, and a ghostly woman who looks a lot like the heiress seen dying at the beginning. It all builds to a very strong, creepy climax, polishing off a pretty solid ghost story and the closest thing here to a traditional English yarn. 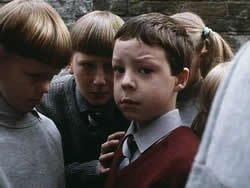 Finally we reach the last and arguably best of the series, "Number Six," which caused a few sleepless nights for many younger viewers when it originally aired. Little Johnny is having nightmares about spooky kids in the woods and someone brandishing a big butcher knife. Could it have something to do with the child murders going on in the area? And what about the really, really strange children at school who keep saying "You're going to play with us?" and standing around in circles uttering creepy Celtic chants. Financially struggling police inspector Jack (McNally) starts to think that ancient Druid sacrificial rituals might be involved, leading to a string of clues involving kids' drawings. Featuring an overwhelming air of paranoia (and a cameo by a Peter Straub novel), this is really good stuff and very, very nasty for '90s television. Bonus points for the last scene, a nice twist on a certain respected '70s horror movie classic.

The five episodes are spread out over two DVDs, with three on the first and two on the second. Image quality is fine considering these were shot on 16mm film in the mid-'90s, so expect lots of grain and darkness in the night scenes. The 2.0 mono audio is likewise fine, wringing some chills from the active sound mixes and the spooky main title theme by Colin Towns (The Haunting of Julia). Weirdly, each episode has complete end credits but the episode titles are never shown on screen, nor are any director or writing credits. However, at least two episodes were directed by Lawrence Gordon Clark, who helmed many of the best installments of A Ghost Story for Christmas. (The others were directed by Bob Mahoney and Rob Walker.) Definitely worth a look for creepy fun on a dark, windy night.