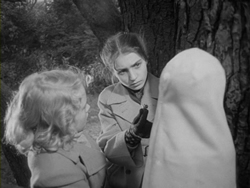 The BFI has been reviving some truly astonishing genre oddities from the vaults of the Children's Film Foundation, a series kicked off with London Tales that became 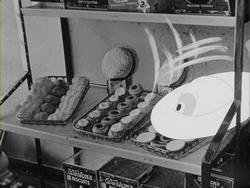 exponentially stranger with entries like Scary Stories and Weird Tales. Now you can add another one to that list with Outer Space, which essentially offers three very different, eccentric variations on the same theme: an alien lands somewhere in England, some kids find it and make friends, and mayhem ensues. However, these also happen to be three of the most bizarre aliens you'll ever see.

First we have Supersonic Saucer, a 1958 film penned by Frank Wells (son of H.G.) in which some prep school kids visiting an observatory at night spy a flying saucer, much to the disbelief of their chaperone. The children who can't go home for the holidays are stuck on the school grounds, where an alien visitor from Venus soon rears its head the following afternoon: a big-eyed, hijab-wearing creature named Meba who can transform into a cartoon flying saucer and telepathically tell them its his home planet. Of course the moppets decide to make friends and keep the pint-sized secret around for the vacation. Unfortunately Meba takes everything they say literally, which leads to mishaps involving accidental theft, bank robbery, and spontaneous combustion. Naturally some criminals are lurking in the wings, too, which leads to a mildly dangerous climax. 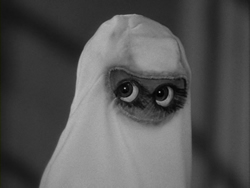 The appearance of Meba pretty much eclipses everything else in this film. With giant eyes, huge eyelashes, and the ability to shapeshift, it's a peculiar stab at cuteness that more often comes off as unsettling, especially when it's sitting in a dark crib staring through wooden bars. The liner notes call out the film's similarities to E.T., which become obvious as soon as the alien makes its first appearance; of the three films here, it's easily the closest to that Spielberg hit in terms of structure if not execution. The kids are all fine in their undemanding roles, with Gillian Harrison doing the heaviest lifting as the 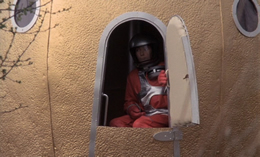 despondent foreigner Greta. The rest are the usual types like the cool girl and the nerdy science expert, all of whom try to teach the alien that it isn't to break laws that might not make sense for a moral standpoint. Newly transferred from the original 35mm elements, the film looks great and is presented in its original 1.33:1 aspect ratio.

Next we jump to vivid color for the 1972 offering Kadoyng, an off-kilter yarn in which three kids out in the woods are startled when a gold spaceship shaped like a giant (American) football turns up with a clumsy human-like visitor emerging on a ladder. As it turns out, the traveler (Maguire) also has the ability to teleport. He claims to be from Stoikal , a "super planet" filled with "mental and physical giants" (which would make him a bit of a runt). Oh, and he has an extrasensory ball on a stalk sticking out of the top of his head (which has to be covered with a top hat). Inside the ship is an unseen companion on the ship named Babble, whose true nature will become apparent later, and of course the kids decide to bring him home and introduce him 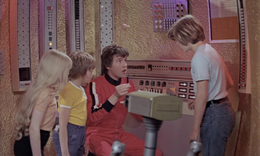 to their parents. A mishap with his extra appendage sticks him with the name Kadoyng, and our poor little reject is soon embroiled in a string of adventures. That includes a town hall meeting about the impending motorway, where those teleportation skills cause more than a few complications. An afternoon outing for fish and chips soon blows Kadoyng's cover, and everyone bands together to figure out how to stop that dastardly motorway from ruining their town once and for all.

There's really nothing else quite like this one, which was also penned by Maguire and feels like the product of a particularly drugged-out environmentalist gathering. 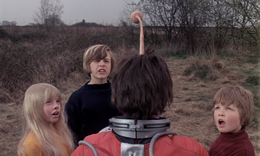 Kadoyng's powers seem to go to some pretty dark, Wonka-style places at times, particularly the sequence in which the earth itself turns into a ravenous, gelatinous mass that swallows up any hypocrites in sight. Then there's that antenna coming out of his head, which looks... well, pretty inappropriate for a kid's film, but we'll just leave it at that. Check this one out when Sid and Marty Krofft specials start to feel too normal. Again the source elements have been kept in superb shape, and the 1.66:1 anamorphic transfer looks great with a bright color palette that could only have sprung out of '72.

Last we have the most famous film in the set, 1978's The Glitterball, which takes place in the most overtly working class setting of the trio. Here the alien is a silver metallic ball (one year before Phantasm!) whose mother ship alarms the local military. With jets in pursuit, the little sphere winds up in the hands of a pair of boys who find out it loves to devour entire bowls of custard and can write out messages with various foodstuffs. With the military in hot pursuit, things get even stickier when a crook named Filthy (TV vet Pember) tries to swipe the visitor for his own nefarious ends.

A funkadelic score by Harry Robinson (who did all three of Hammer's Karnstein vampire films), assured direction by Harley Cokeliss (Black Moon Rising), and charming special effects by the team behind Space: 1999 (who worked on this in their off hours) make this a particularly memorable film and a solid intro to the CFF aesthetic if you haven't sampled any

previous volumes. The creativity level runs high and the two kids are better written and acted than usual, with the convincing day-to-day environment offering a potent contrast to the more fantastical and military elements. Gotta love those great opening and closing titles, too, and who could resist a movie where a guy gets chased and dragged through a supermarket by hundreds of pinballs accompanied by a synth rendition of "Ride of the

Again the quality of this much-requested title is very impressive, with an anamorphic 1.85:1 transfer looking exactly like a freshly-struck print of a '78 film. This one should make a lot of people happy. As with past CFF titles, the liner notes booklet is very useful as it provides a great deal of context for the films and also includes a thorough Robert Shail essay about the history of the Children's Film Foundation in general. Vic Pratt contributes a piece about the evolution of science fiction popular culture during the time period represented here, while Alex Davidson tackles Supersonic Saucer and Pratt points out the many, many peculiar qualities of Kadoyng. Cokeliss also provides his own memories of working on The Glitterball, covering both the budget-conscious special effects and the film's warm reception and enduring legacy.