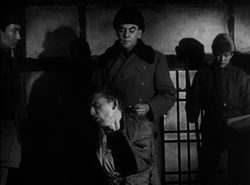 Easily one of the rarest titles ever released on Blu-Ray (or even DVD for that matter), Captured was ostensibly designed as a d 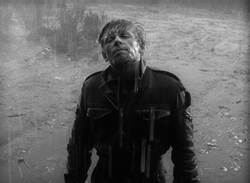 ocumentary-style educational film to coach military officials in methods for their troops to ward off harsh interrogation techniques should they become prisoners of war. The film was never released to the public (only receiving its first public screening less than a decade ago) and also marked one of the few feature-length efforts for John Krish, who cut his teeth on a number of informational shorts and a few commercial films like the sci-fi oddity Unearthly Stranger and the oddball Decline... and Fall of a Birdwatcher.

Not so much a traditional narrative as a sequence of scenarios, Captured depicts the methods used by Chinese captors on the British soldiers confined in a prison camp. The action never leaves the shadowy, sinister confines of that main setting, with tactics ranging from psychological "re-education" methods purportedly favored by Communist regimes to a little practice we now know as waterboarding, made famous in the wake of American "enhanced interrogations" in the Middle East. It's actually jarring to see the latter used in a '50s black and white film decades before 24, Zero Dark Thirty, or, uh, It's Always Sunny in Philadelphia. The eventual message of the barrage of brainwashing and physical anguish is that soldiers should stick together and never crack, even when faced with techniques that might seem completely inscrutable or savage. 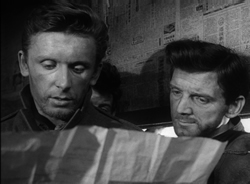 What makes Captured especially interesting today is its visual style, which could easily be mistaken for something by Don Siegel or Robert Aldrich. The stark shadows, claustrophobic angles, and committed performances are well served by Krish, who has undergone something of a resurgence in critical awareness thanks to several works unearthed by the BFI (including "The Salvage Gang," seen on their earlier London Tales release). Released as part of their diverse and wildly unpredictable Flipside series, BFI have outfitted this as a dual-format release with both Blu-Ray and DVD options containing the main feature and the same extra short films. The transfer of Captured from a 35mm fine grain at the Imperial War Museums looks excellent apart from a little fleeting element damage, with excellent detail and no overzealous noise reduction. 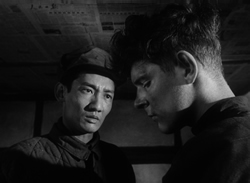 That's really just the beginning, though, as you also get four bonus Krish shorts and a new featurette to boot. Weirdly, the recurring theme in most of these seems to be "dead kids," climaxing in a classic traumatic gem we'll get to in a second. First up in "Sewing Machine," a one-minute '70s bit of educational terror with a girl left unattended by a roadside as the narrator warns us this is the final moment of her life... because her mom's off sewing inside and not paying attention. (This was also included in SD only on the amazing Stop! Look! Listen! installment of the COI Collection DVD series.) The very brief fire safety miniature "Searching" from 1974 instead shows the aftermath of a tragedy, using somber tracking shots to show what happens when children meet an uncontrolled inferno. The prison system goes in front of the camera next for 1976's "H.M.P.," sort of an hour-long recruiting film for penal system employees, with three recruits meeting up and telling a prison clergyman about their very different experiences there ranging from the relatively sedate to the borderline terrifying. 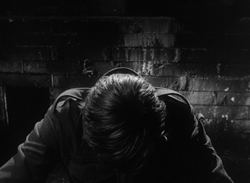 Then we get to the real show-stopper of the set: "The Finishing Line," a jolting 1977 scare film previously tucked away in standard def on the BFI's The Age of the Train (which has a few other wild little surprises in it as well). Here we have, courtesy of a daydreaming tot, a fantasy world straight out of The Hunger Games where adults let kids run rampant and undertake a series of afternoon activities like, well, breaking through fences onto railway lines, throwing rocks at passing trains, and walking in a line down a dark railroad tunnel that goes about as well as you'd expect. The escalating carnage over the film's 21 minutes is truly surreal to behold, with chipper band music and bright colors offsetting the scores of underage extras left mangled and spattered with stage blood. Absolutely incredible stuff and worth picking up this disc all by itself. Finally the disc rounds out with a new 2013 interview with Krish called "Shooting the Message," in which he talks about getting his start with the Crown Film Unit, his government gig on Captured, and some of his most memorable educational shorts made during and after his feature film career. The liner notes booklet also includes essays about the main feature and shorts by James Piers Taylor, Alex Davidson, Patrick Russell, and gifted horror reference author Stephen Thrower (who tackles exactly the film you'd expect him to). Highly recommended.