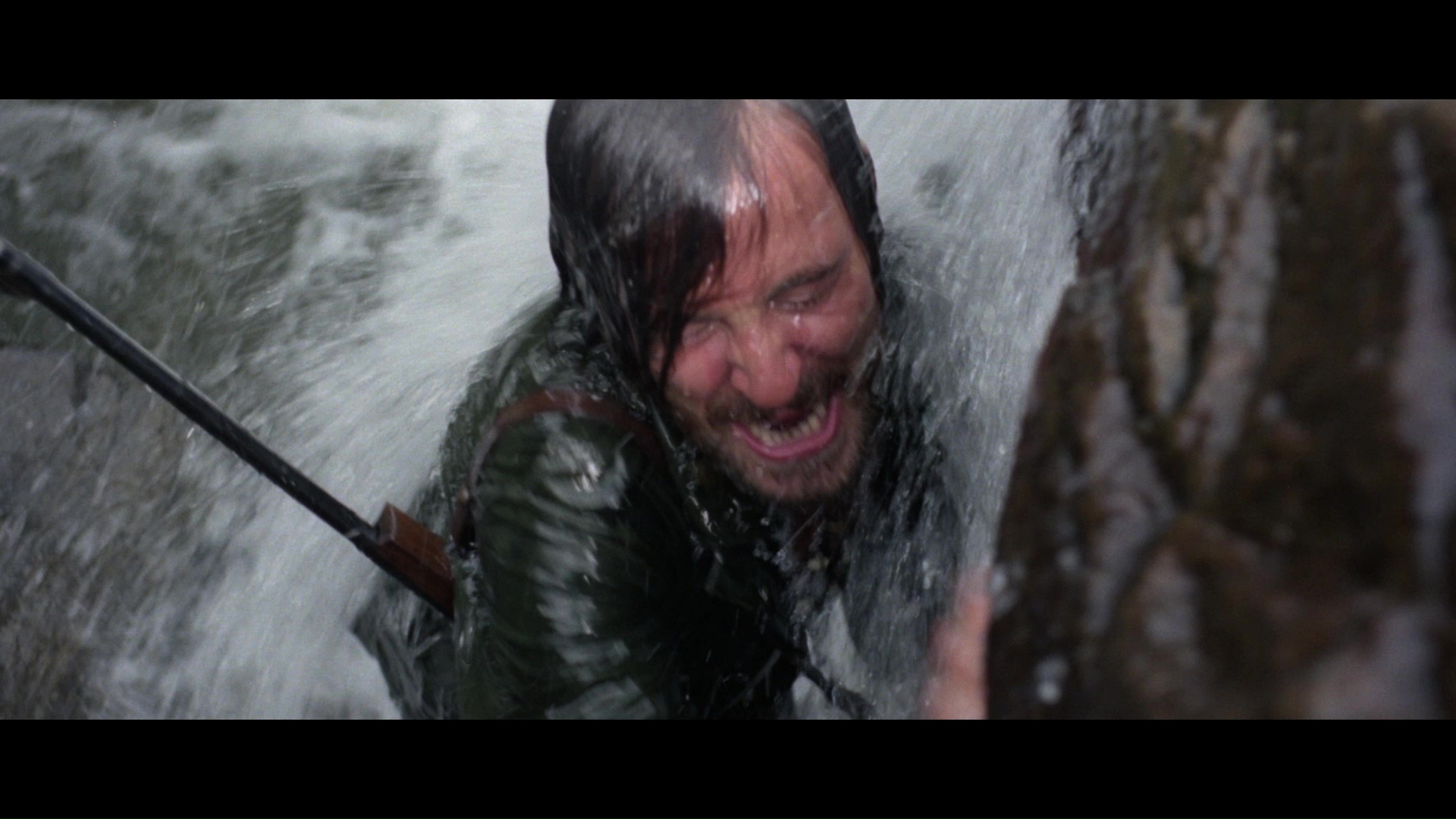 closest thing to a reputable Italian cannibal film, Mountain of the Cannibal God

sports a much higher pedigree than expected. Director Sergio Martino had already proven himself a master of the giallo formula, so he brought a certain amount of professionalism and a brisk pace to this pulpy adventure, which straddles the line somewhere between the kitschy opportunism of Eaten Alive and the mind-shattering depravity of Cannibal Holocaust.

Wealthy explorer's wife and clotheshorse Susan Stevenson (Andress) decides to do something about her husband's mysterious disappearance in the jungles of New Guinea. Along with her petulant brother, Arthur (Keoma's Marsina), she decides to follow her spouse's expedition path into the green inferno with the aid of anthropological guide Dr. Edward Foster (Keach), who knows a lot more than he's telling. Along the way Susan nearly falls prey to a tarantula, whose death inspires their native companions to skin and eat an iguana in penance to the gods. Another native then falls prey to a clever body-piercing tree trap, but still they press on, determined to reach a mysterious, uncharted mountain populated by a tribe known as the Pooka. (Yes, the Pooka, as in James Stewart's companion in Harvey.) Along the way they also 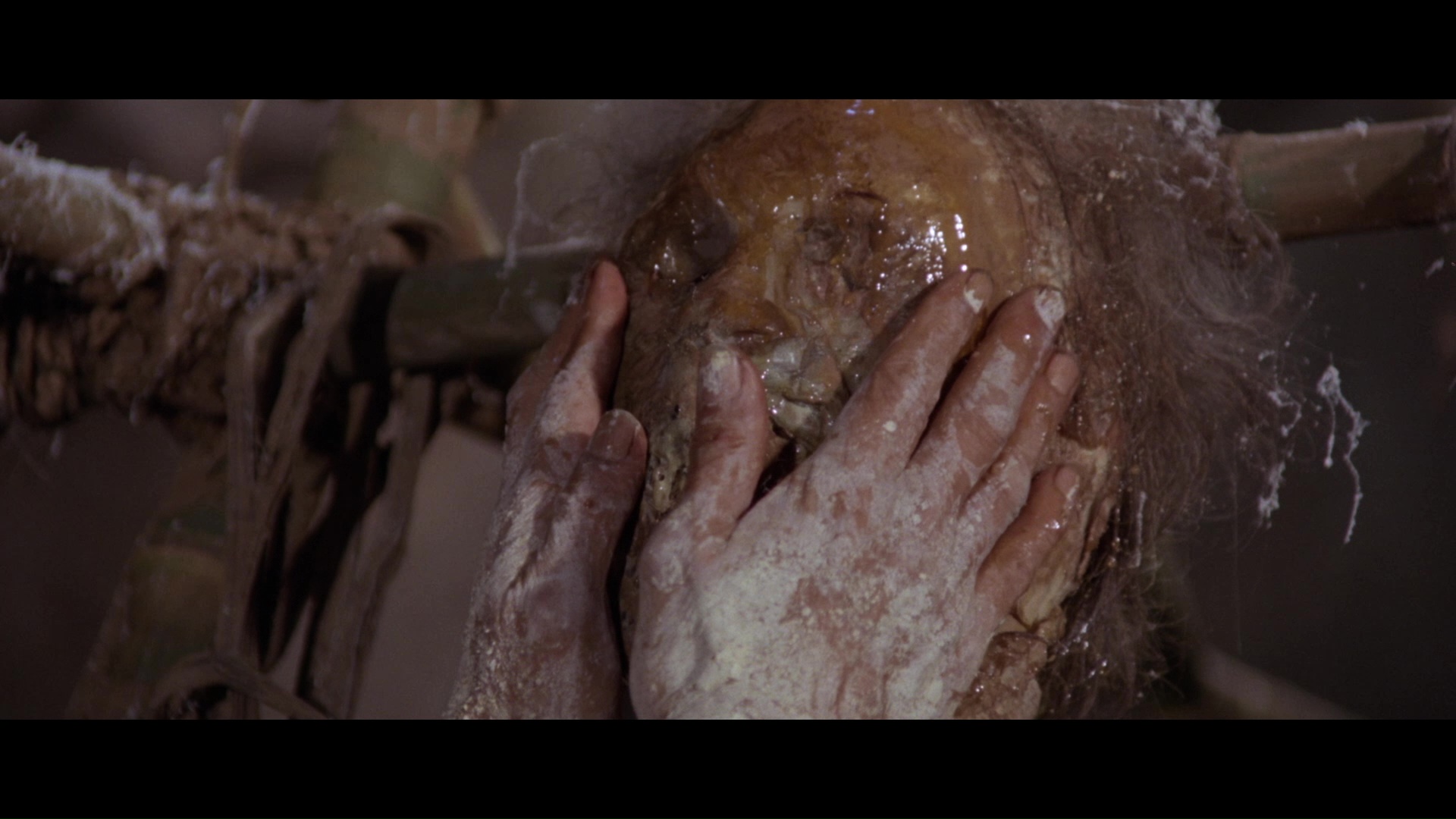 tackle treacherous rapids, ambush-happy boa constrictors, and torn Gucci safari clothing before reaching the mountain, where Susan is promptly tied up, stripped, painted, dressed up in a She-like costume, and trotted out as a sacrificial goddess. 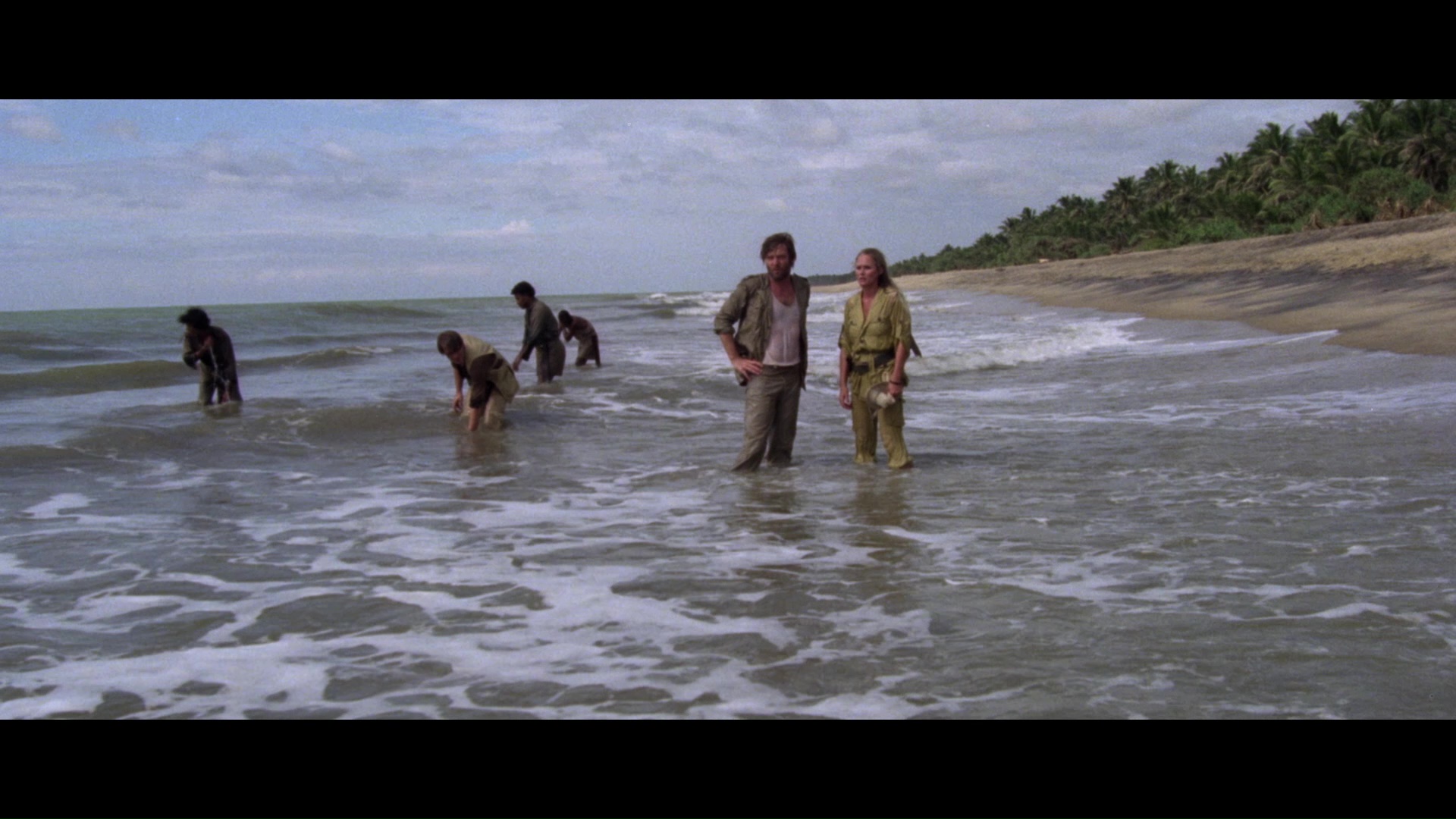 From a historical standpoint, Mountain established many of the conventions later copied in leering gore fests like Cannibal Ferox. Natives are castrated, reptiles suffer agonizing deaths, and in an unwatchable low point that should have landed some people in jail, a monkey is slowly eaten by a snake. Fortunately these stomach-churning scenes are few and far between, with most of the running time devoted to more traditional jungle fare involving Keach's great white explorer and Andress' glamorous jungle girl poses. Sure, it's basically racist and idiotic, but as far as Italian cannibal movies go, this isn't a bad place to start and won't make you run for a shower after the end credits.

Released in the U.S. minus five minutes of gore footage as Slave of the Cannibal God, this film became a familiar title among Italian exploitation fans, usually more often discussed than seen. An uncut print first surfaced on video thanks to the Venezuelan market, but the full scope photography was impossible to appreciate until EC's European DVD in 2001. An American 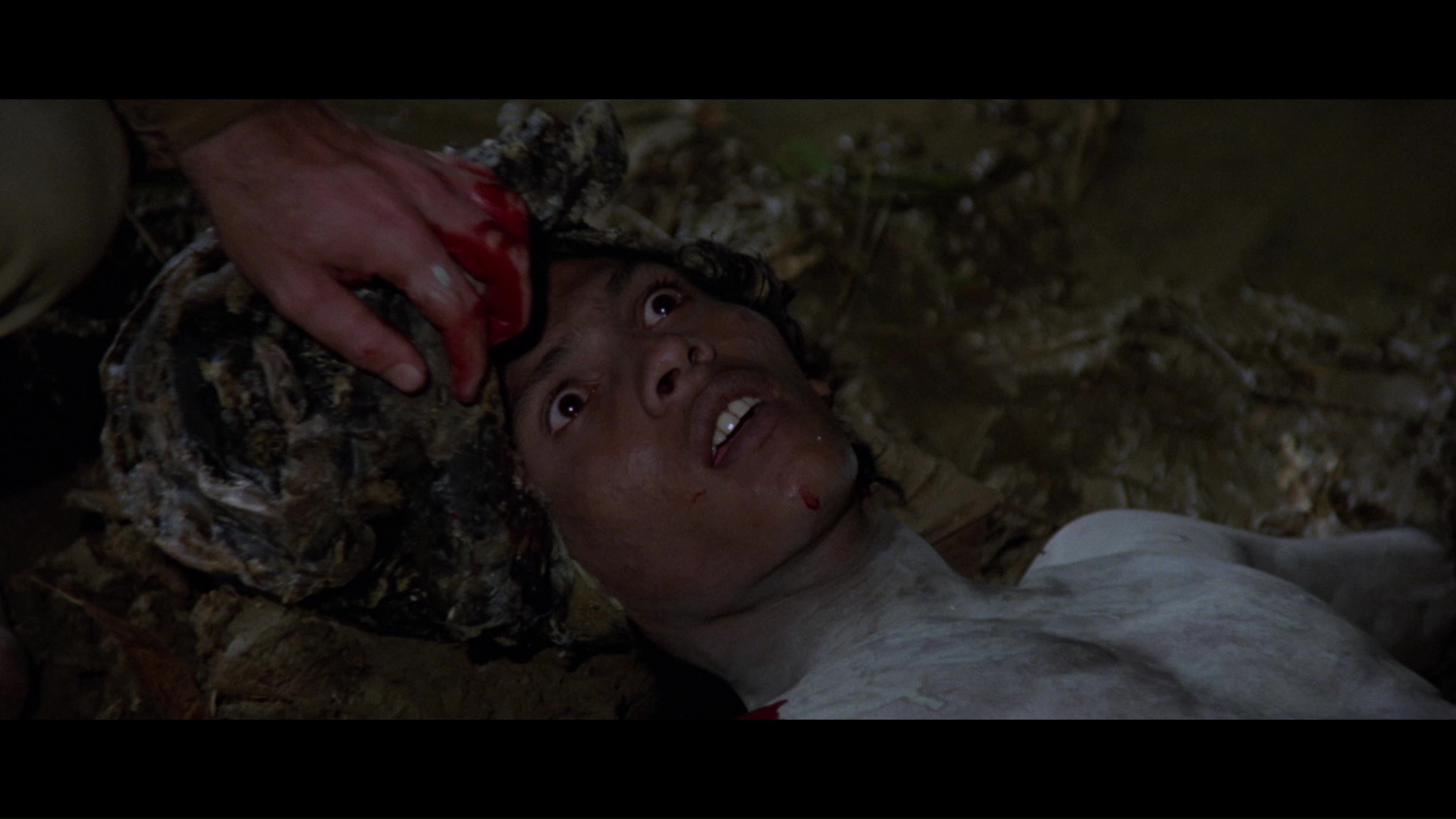 edition in 2002 from Anchor Bay, later reissued in 2007 via Blue Underground, topped that one with a richer and more film-like transfer, with surprisingly natural colors. 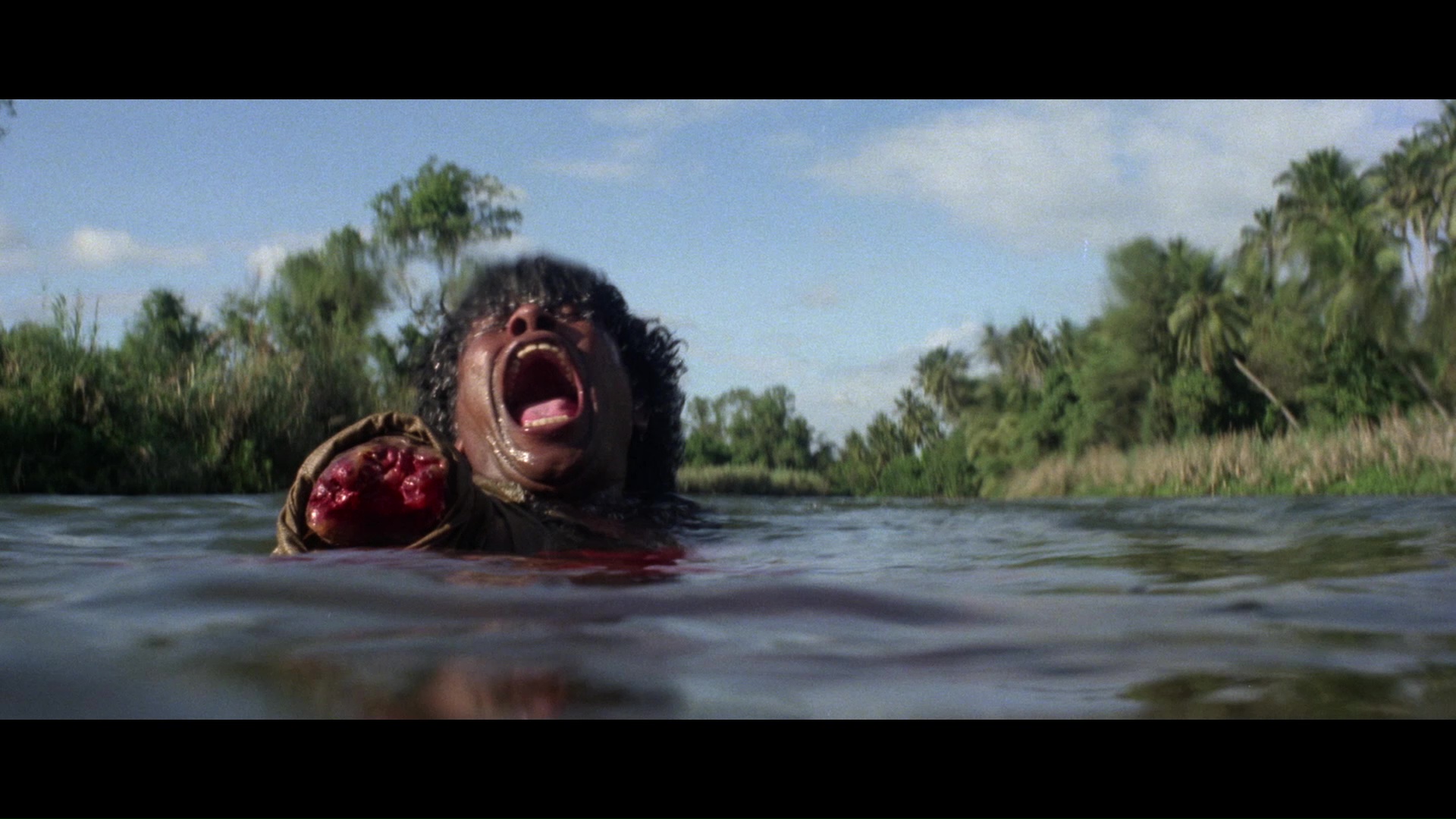 The perfect widescreen framing adds immensely to the film's visual sweep as well. The effective, percussive score by Guido and Maurizio De Angelis sounds just fine in mono, and the discs also include the original (and very funny) theatrical trailer; the EC disc has a gallery of international poster and video arts, stills, and trailers for House on the Edge of the Park and A Blade in the Dark, while the Anchor Bay disc has a different still gallery and the trailer. The real ace in the hole for the American disc is the inclusion of some four-plus minutes of sexual depravity, including a simulated bit of native bestiality with a huge (and very bored looking) pig and a not-so-simulated depiction of a cannibal girl pleasuring herself. Martino discusses the film in a featurette, "Legacy of the Cannibal God" (13m), which puts his claims into serious question by juxtaposing his tale of the monkey's death by snake with slow mo analysis of matting trickery to cover up the poor animal being shoved to its death. It would be interesting to get more of Martino's side of the story, as the editing in this bit and elsewhere makes him look a bit more foolish than most directors would probably like. In any case, one can only wonder what Keach and Andress might have to say about this project now...

In 2018, Shameless Screen Entertainment brought the film to the U.K. (following a very heavily cut earlier DVD from Vipco) with the expected BBFC 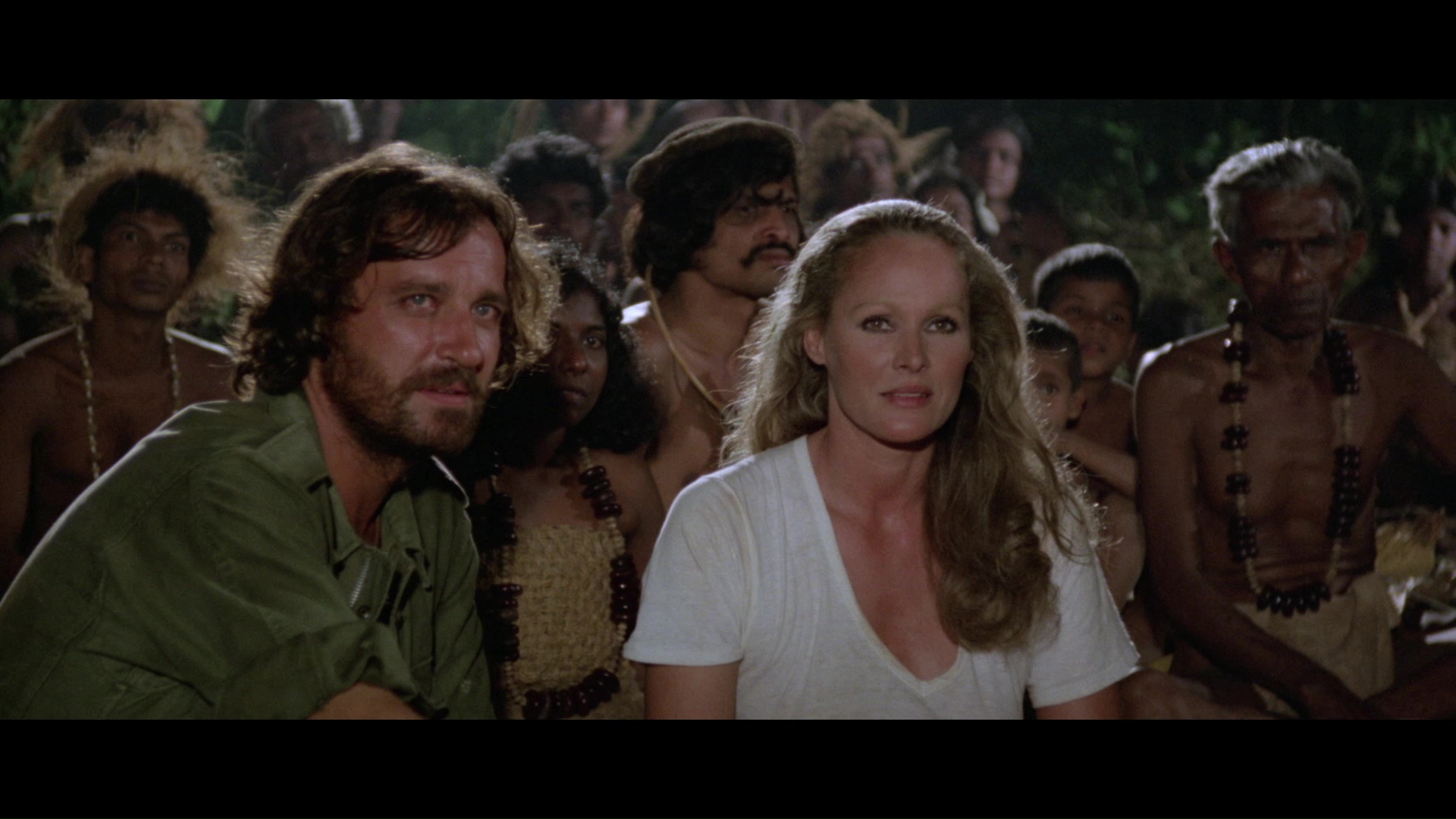 issues regarding the animal violence, which in this case is less extensive than usual and does less damage than, say, Cannibal Ferox or Cannibal Holocaust. It also marks the first U.K. availability of that extended cut with the pig poking and native diddling added in. Martino provides a brief video intro (34s) 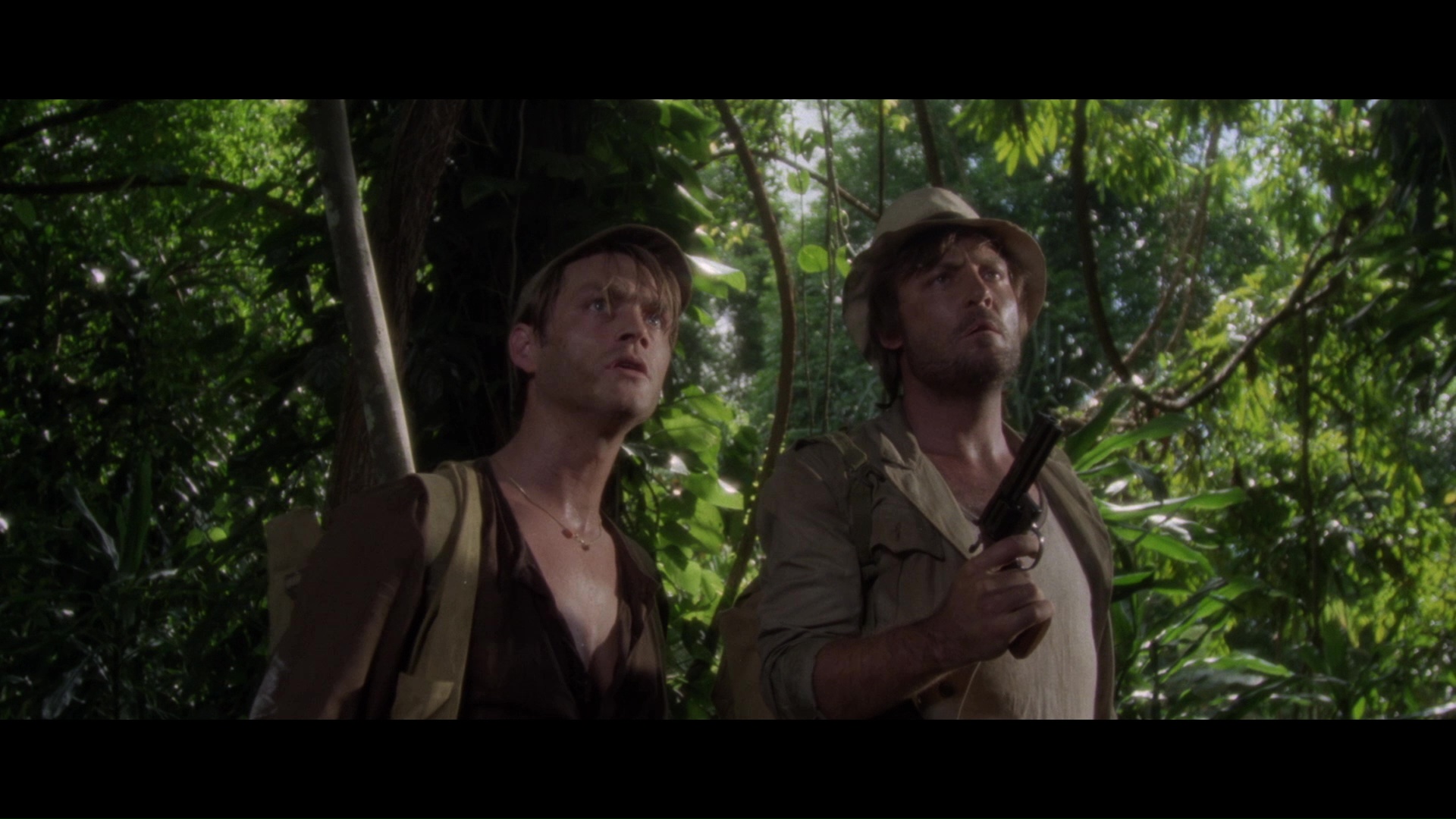 putting the film in context with the Italian industry at the time, while the feature itself now runs 100m29s; not surprisingly, the really upsetting monkey scene has been the main casualty but not all of the animal material is gone (a nasty bit of snake eating still made the cut,surprisingly). Image quality of new transfer (which is slightly windowboxed) leaps way beyond the 16-year-old SD transfer seen on DVD, not surprisingly, with far more detail, additional image info on the sides, and a more muted, green and brown color scheme. Interestingly, the text card at the beginning is a different, more natural font than the more digital appearance on the older DVD. The English DTS-HD MA 2.0 mono track sounds solid as well. As for extras, a new video segment with Martino (2m39s) reiterates the monkey/snake story from a more sympathetic and coherent perspective, while a "Cannibal Nightmare" featurette (46m12s) produced for the film's 2005 Italian DVD release from NoShame features interviews with Martino and producer Luciano Martino as well as some candid conversations with cinematographer Giancarlo Ferrando and M. Antonello Geleng about some aborted ideas for the film and the cast's reactions to the more extreme moments. The English trailer is also included along with newly created trailers for Cannibal Ferox and Cannibal Holocaust, and the first pressing comes in a limited, numbered O-card edition along with-- believe it or not-- a snakes and ladders-inspired board game folded up inside the case. You might have some explaining to do if any kids 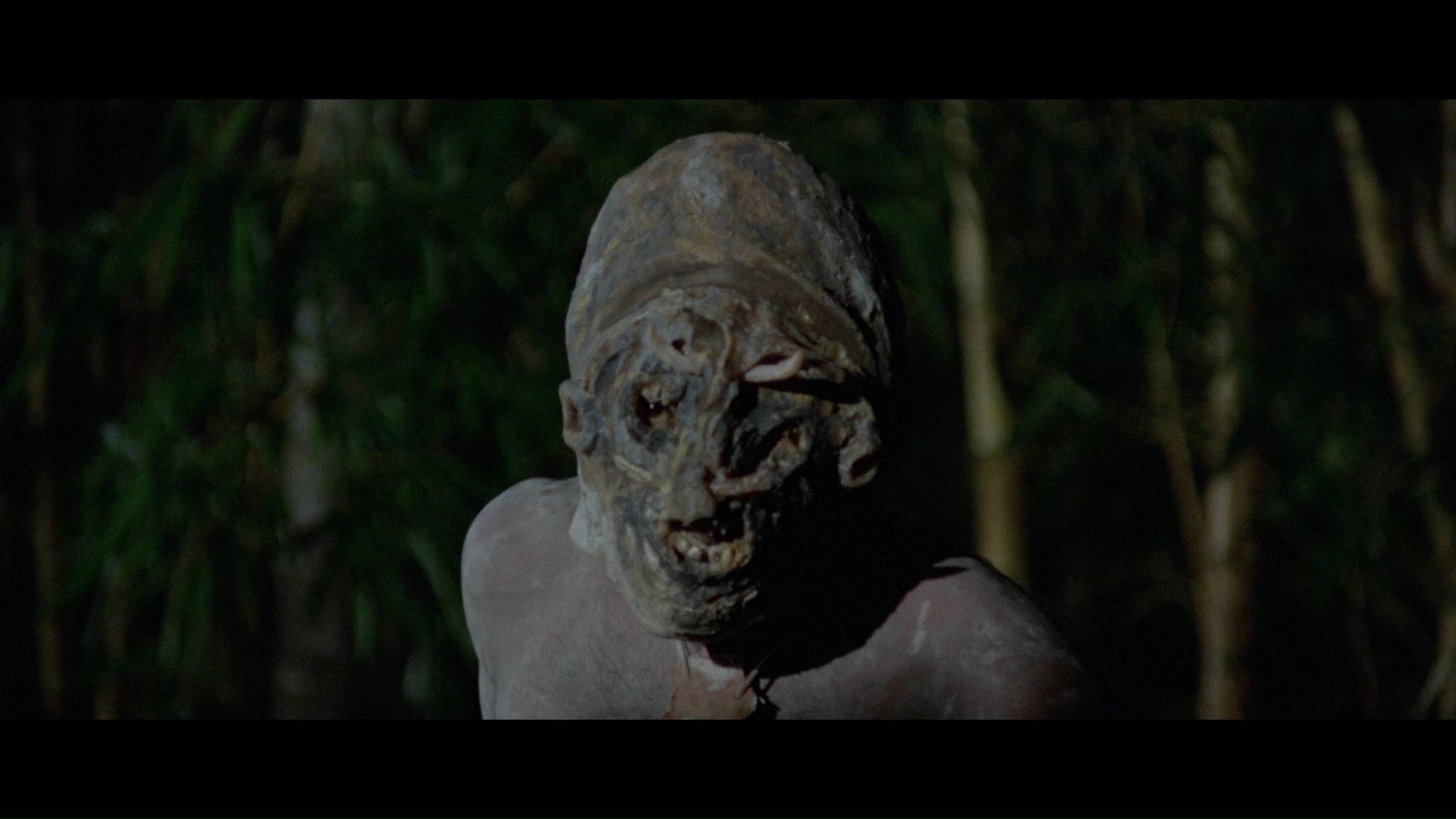 get a hold of it! 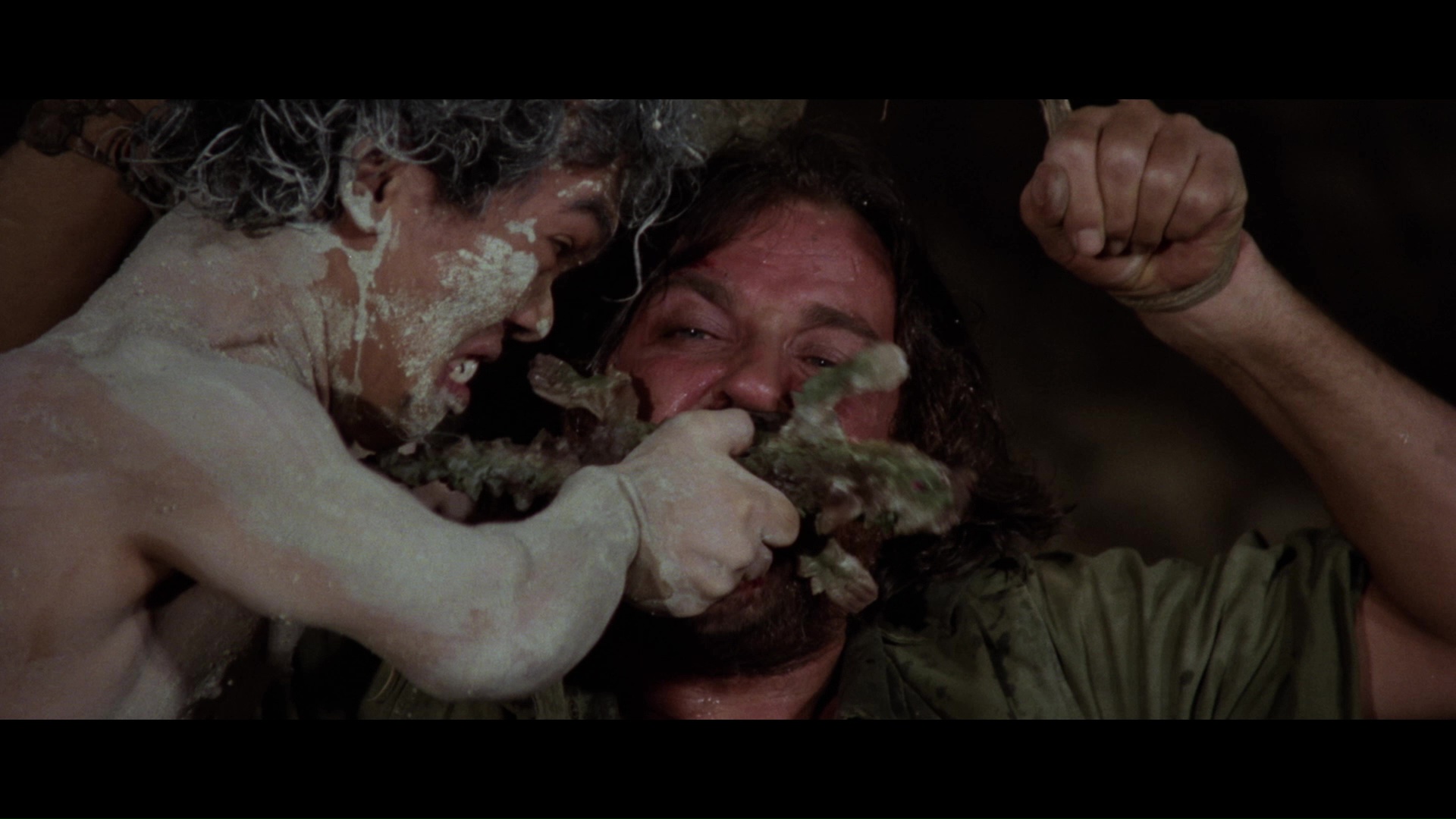 Later that same year, Code Red brought the film to U.S. Blu-ray for the first time under the Slave of the Cannibal God title with a limited slipcover edition sold via Ronin Flix and Diabolik. Completely uncensored at 102m31s (slightly shorter than the Anchor Bay version due to shorter black padding at the heads and tails and a quicker fade out) with all the animal ugliness, native finger fun, and pig poking intact, it also an HD restoration with those trademark hours of color correction done in the U.S. It looks quite different and more vibrant than past transfers, including yet another variation on the opening credits and introductory text, more natural flesh tones, and deeper blacks. There's a brief patch around the 91-minute mark where it looks more dupey and soft for a couple of minutes for some reason, but otherwise it's quite nice throughout. The DTS-HD MA English mono audio is also in good shape, though some age-related crackling and rumbling can be heard at times. Making what appears to be its first appearance in any form in decades here is the New Line 84-minute U.S. version as Slave of the Cannibal God, a welcome reminder of how this used to play drive-ins. The technical presentation isn't as robust (colors are flatter and the sound is quite a bit hissier), but it's a good extra to have. Keach appears for both a banana-centric video intro and a new interview (14m31s) in which he recalls a crazy cobra incident, lauds Andress's physical prowess, points out a funny goof involving a waterfall dummy gag, and notes some of his wilder experiences with Italian crews on films like this and Street People. Two archival Martino interviews are included (24m30s and 20m26s) are added as well, the latter from the NoShame Italian release but here featuring a halting English dub over his comments instead of the subtitles -- an odd choice to be sure. Bonus trailers are also included for Jungle Holocaust, Cut and Run, Ironmaster, and Hands of Steel. 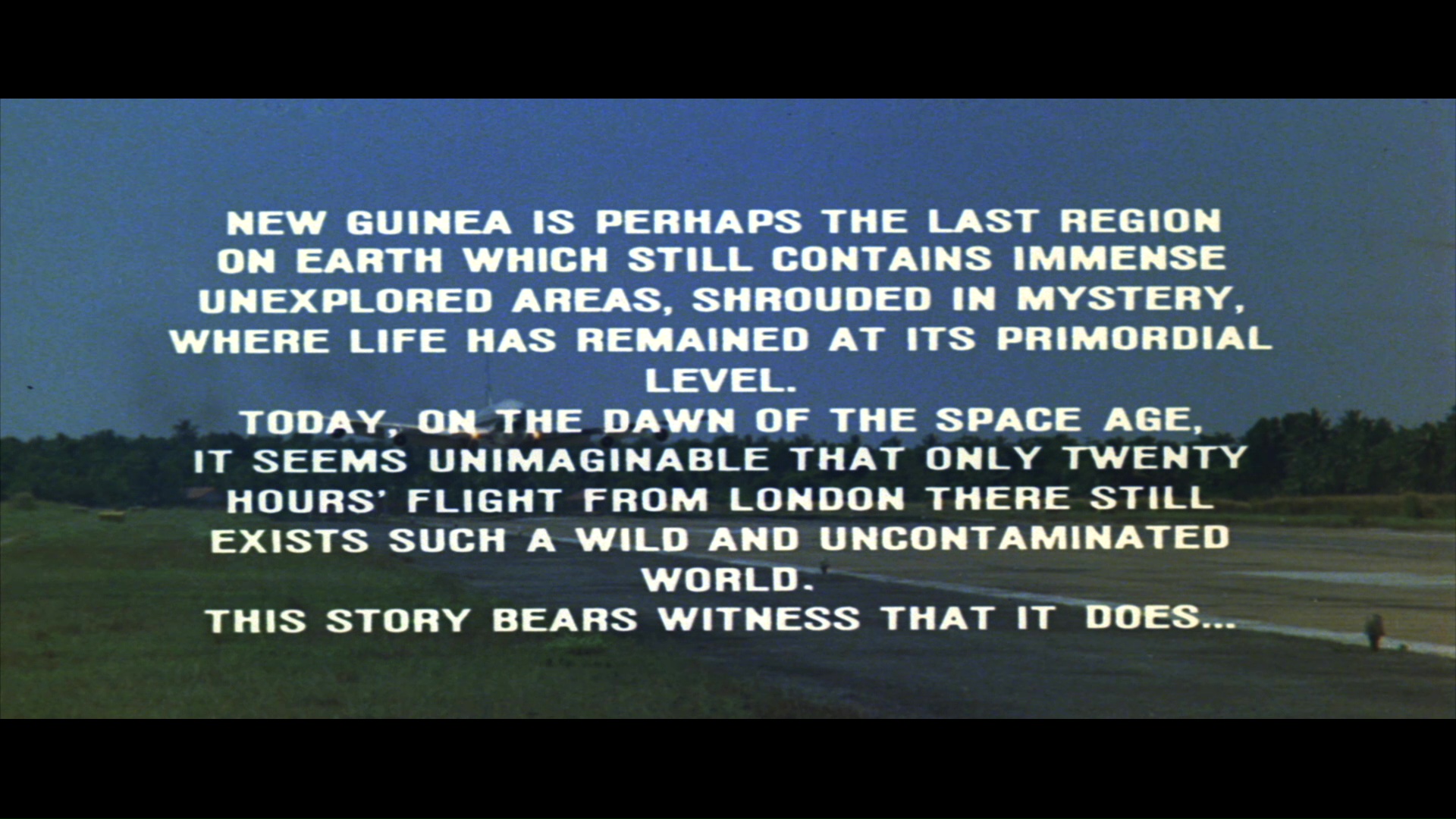 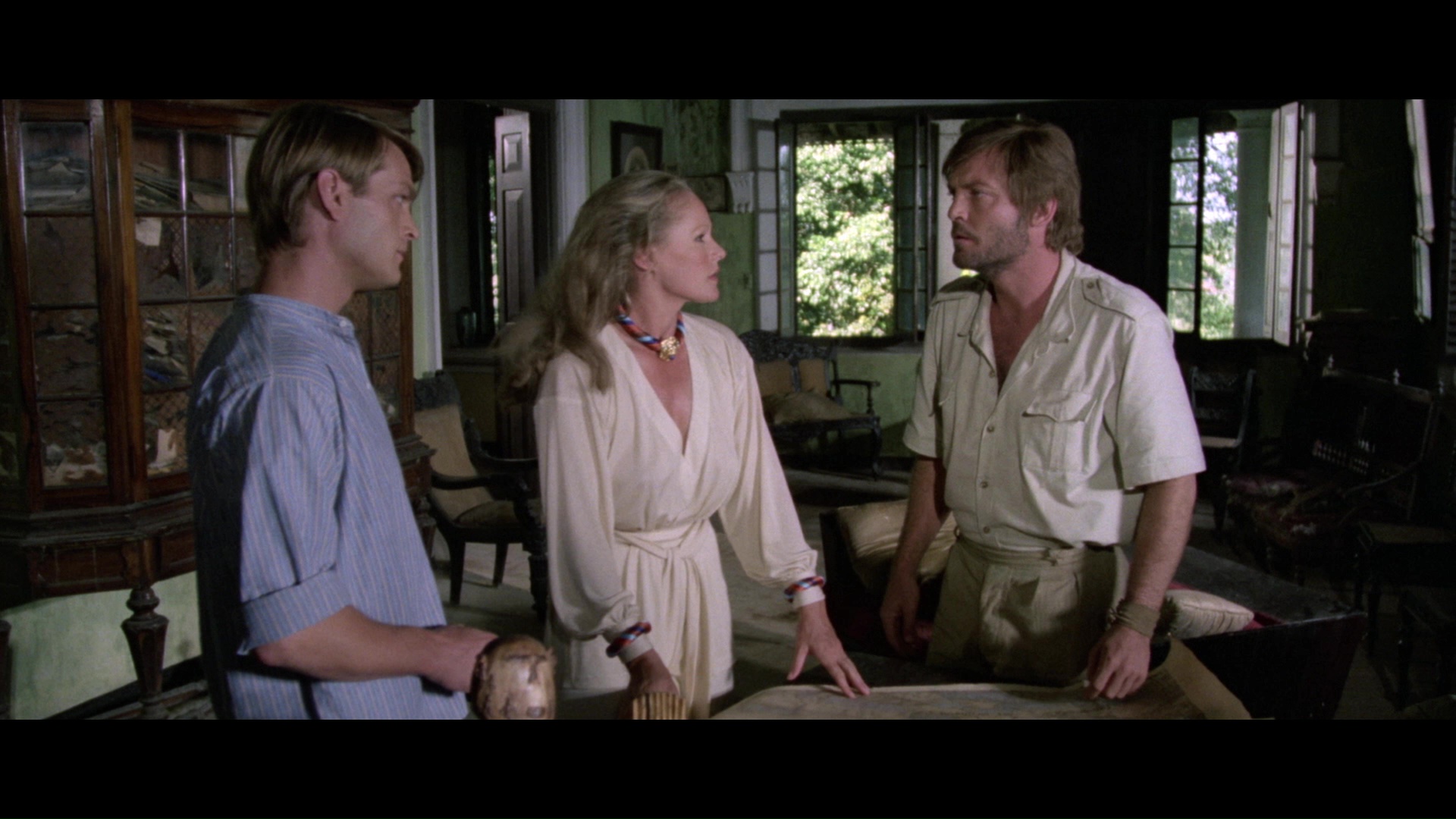 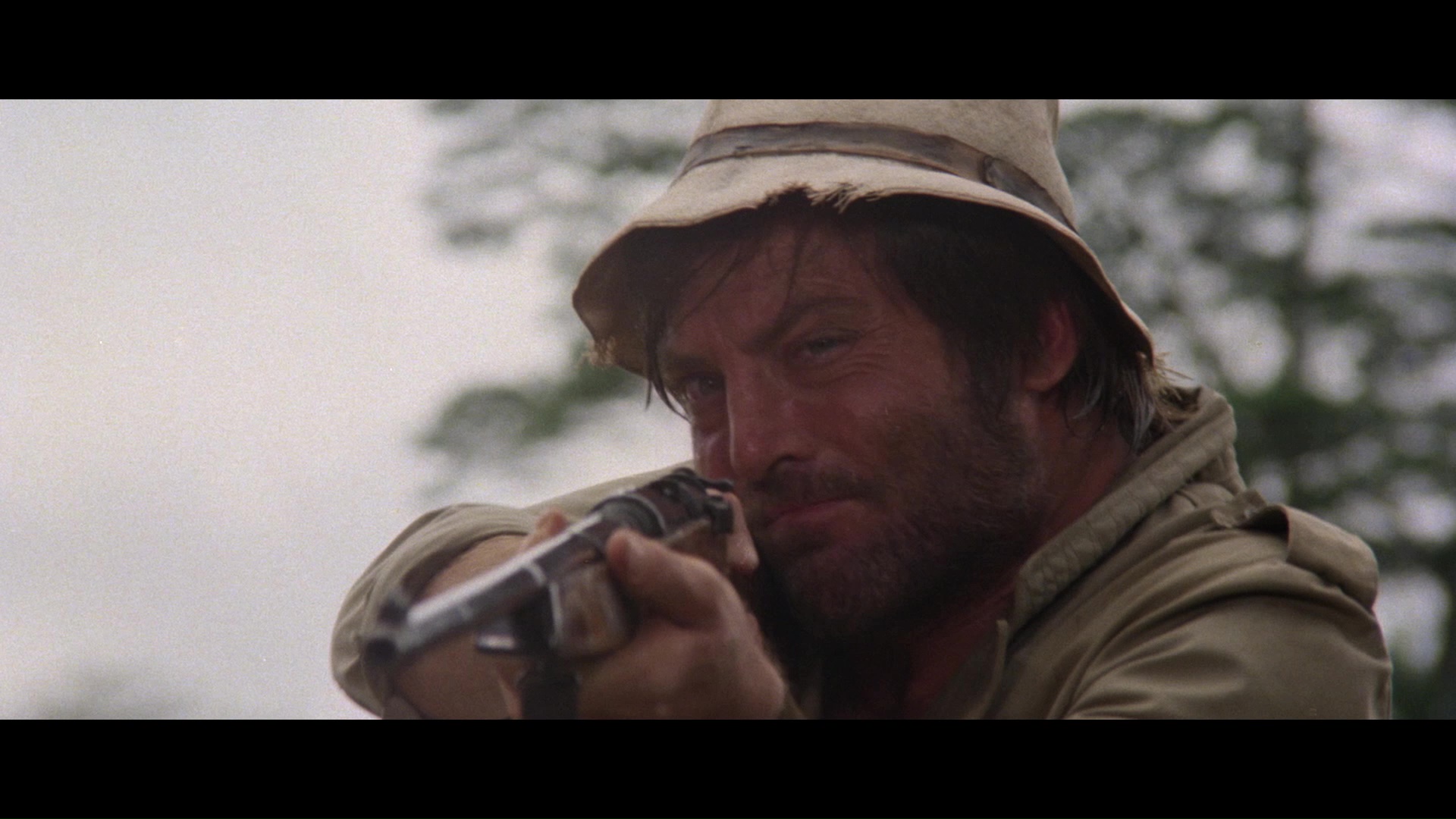 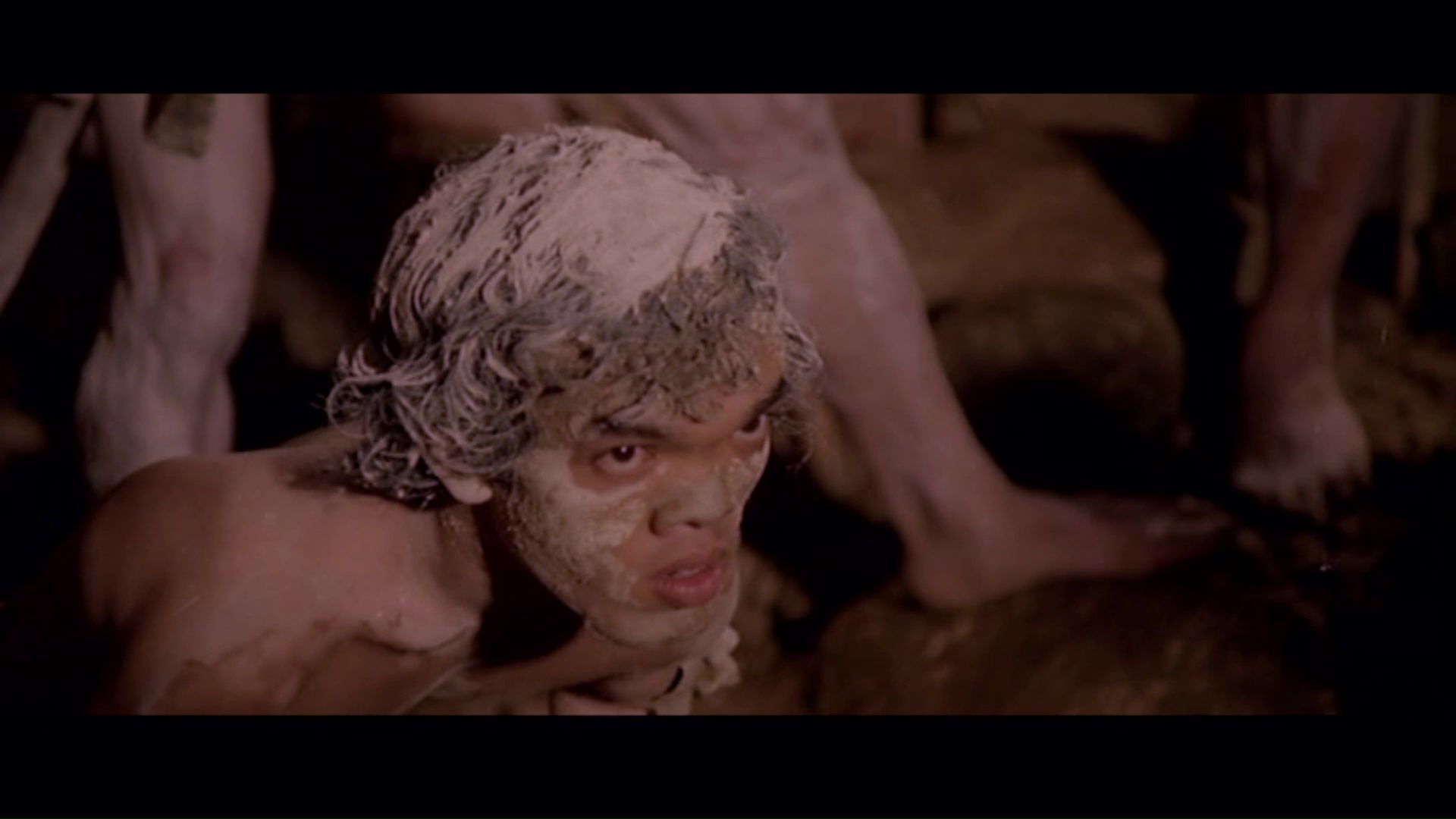 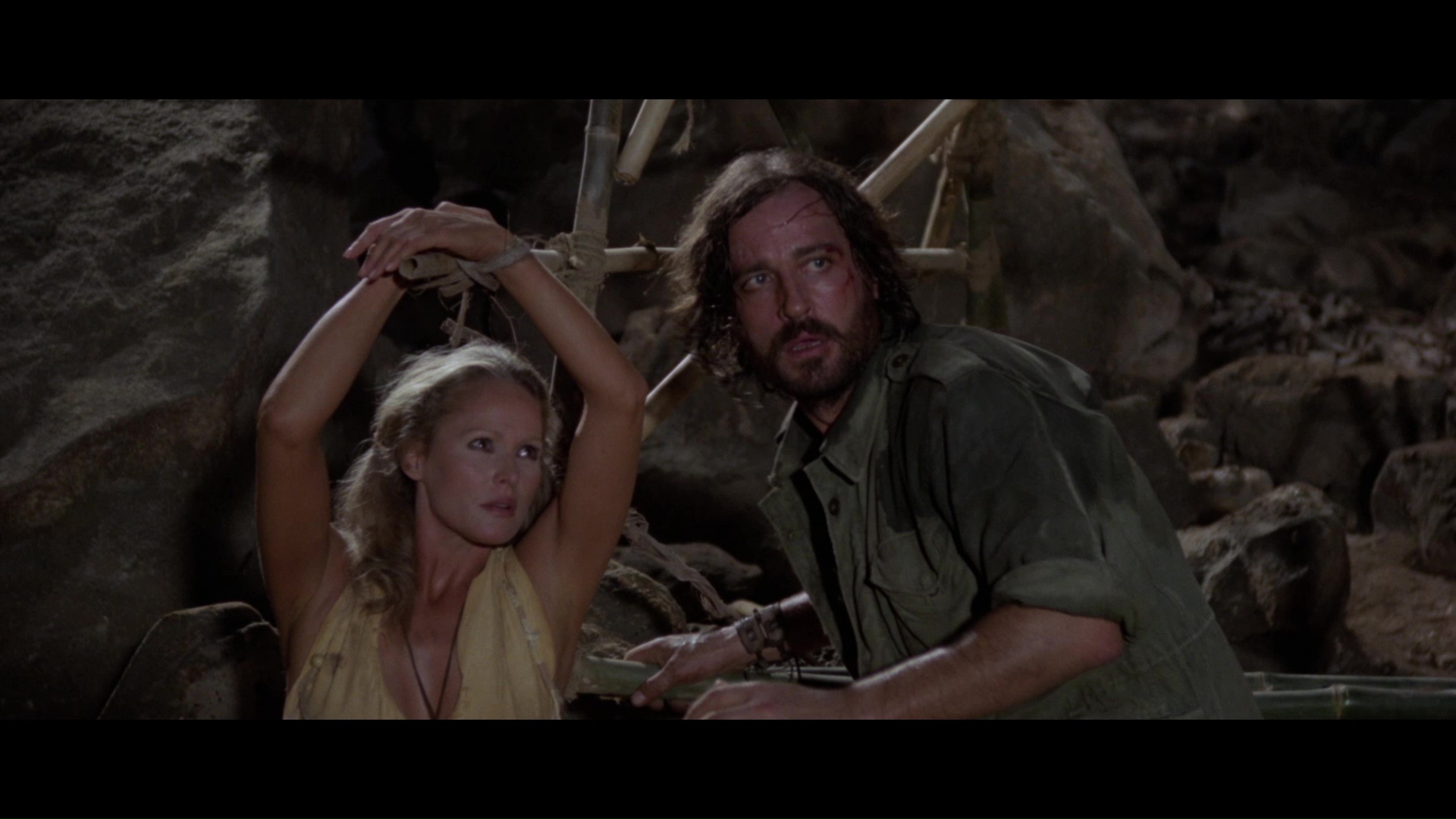 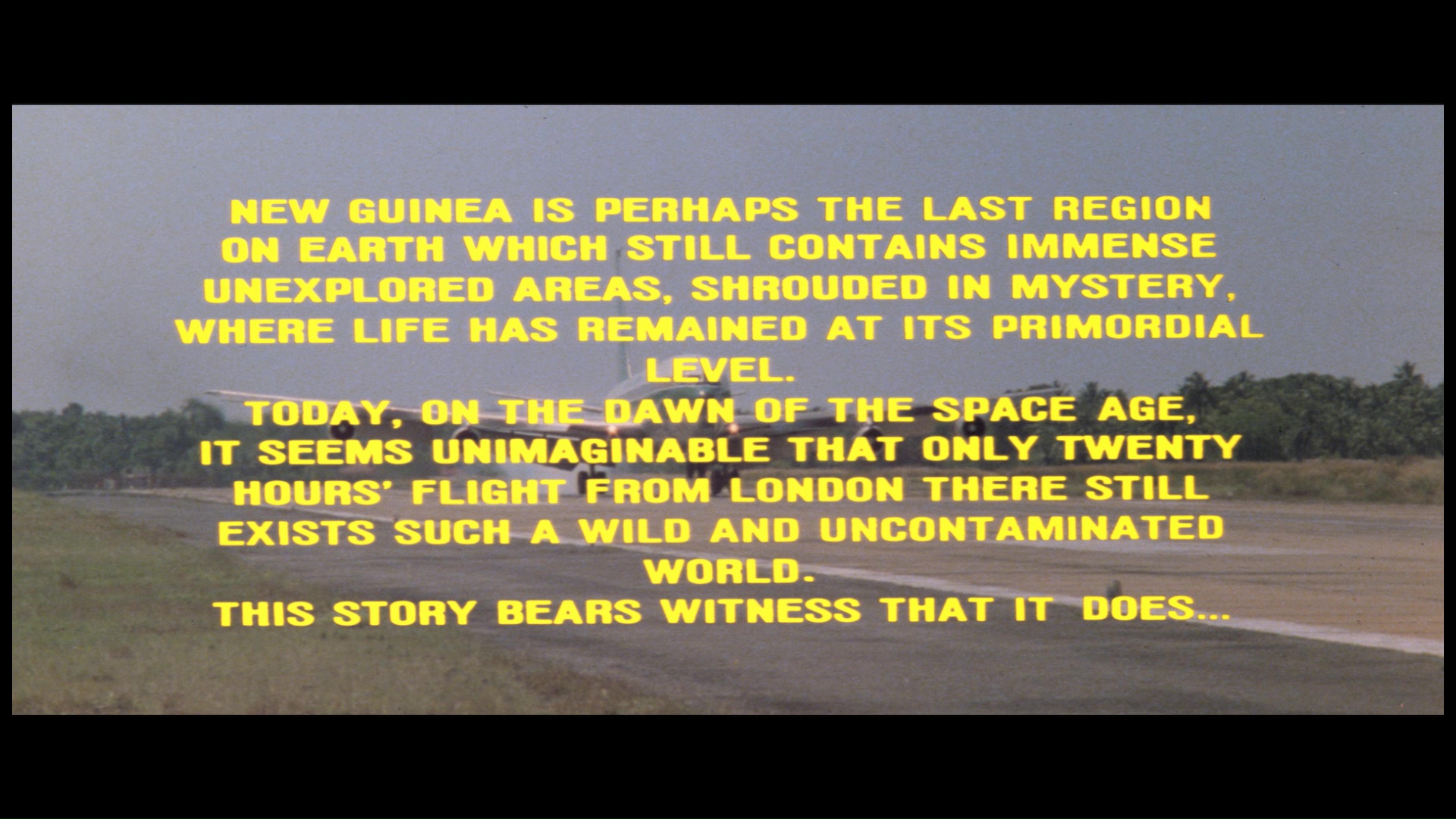 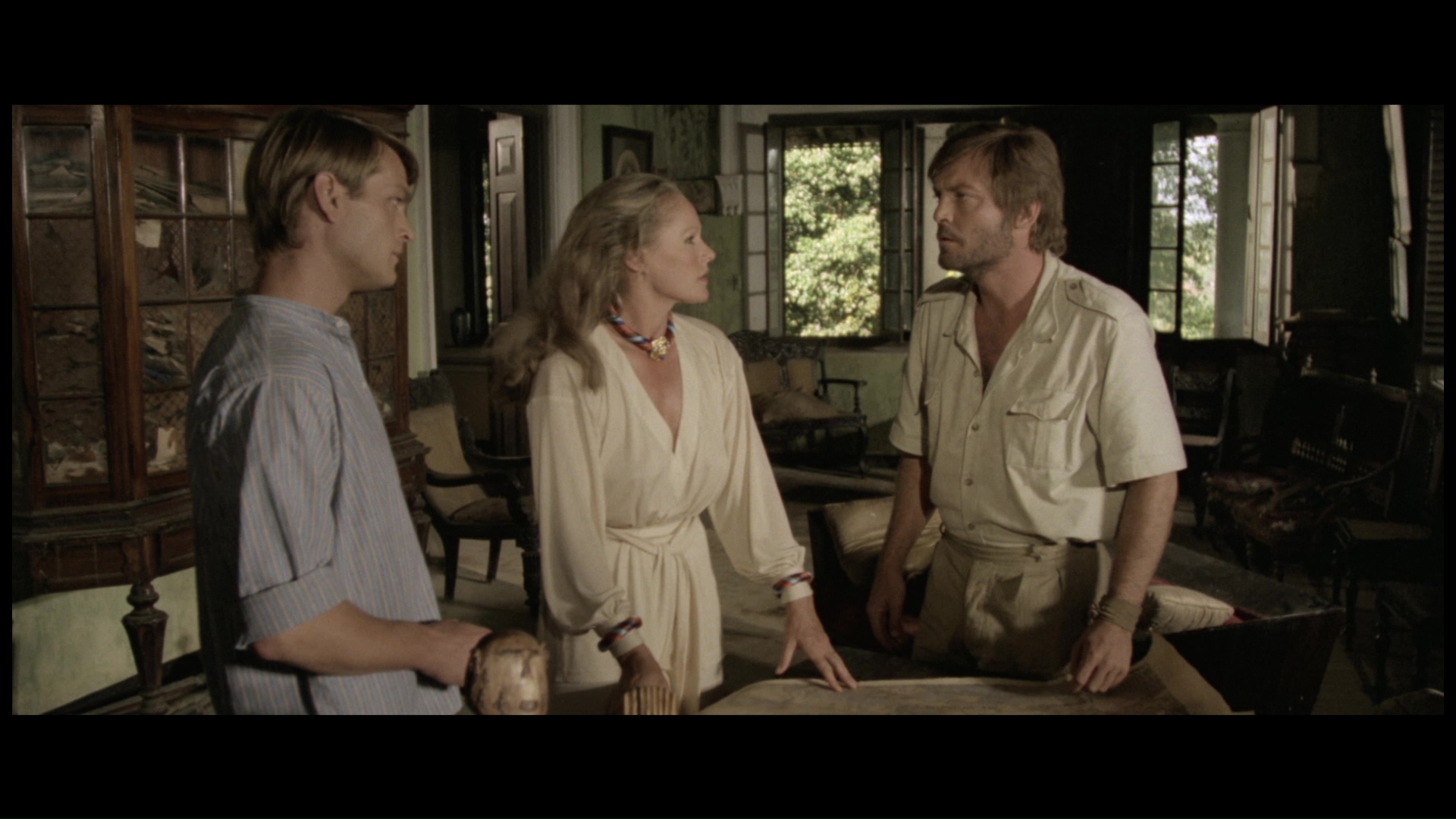 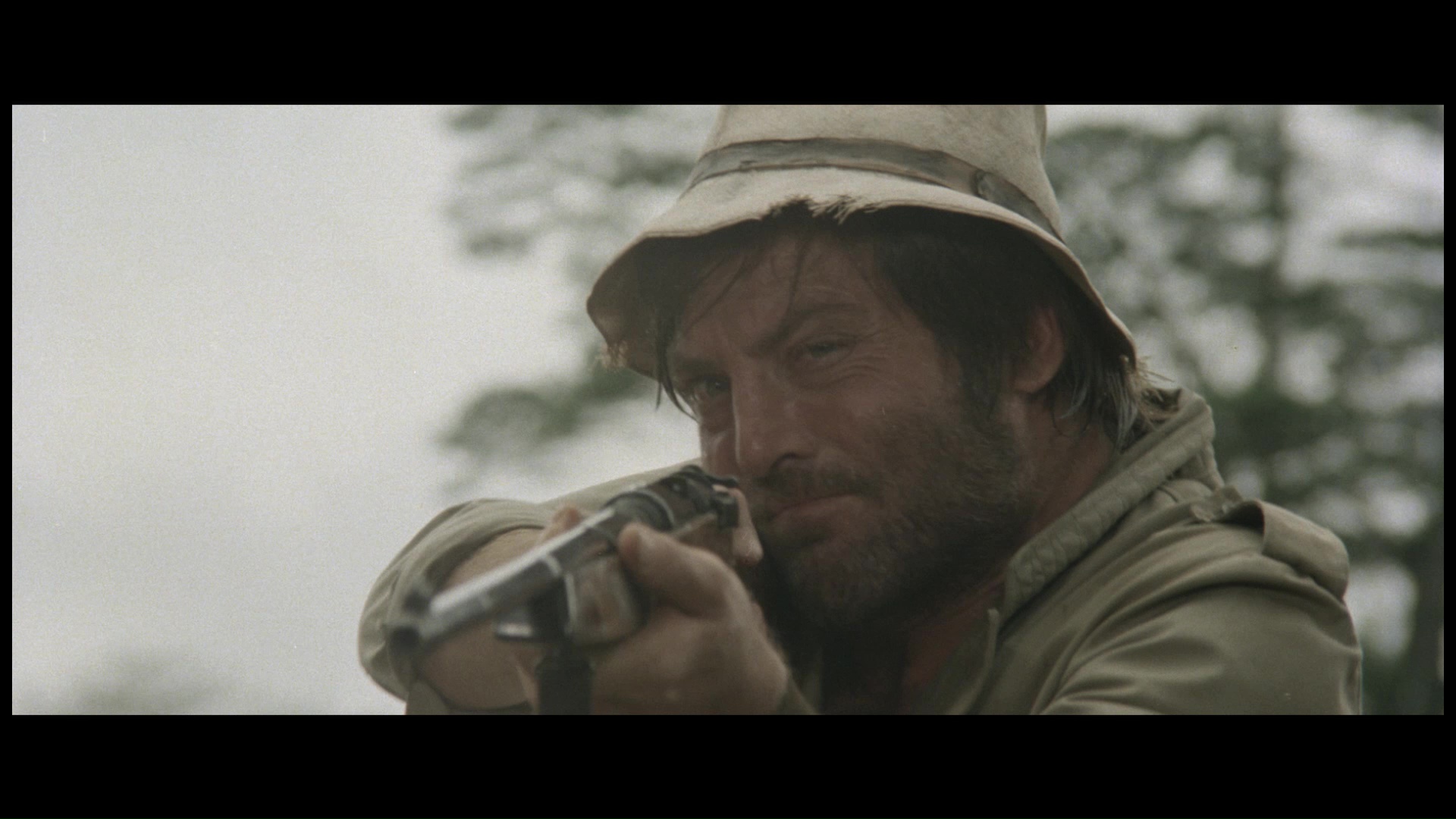 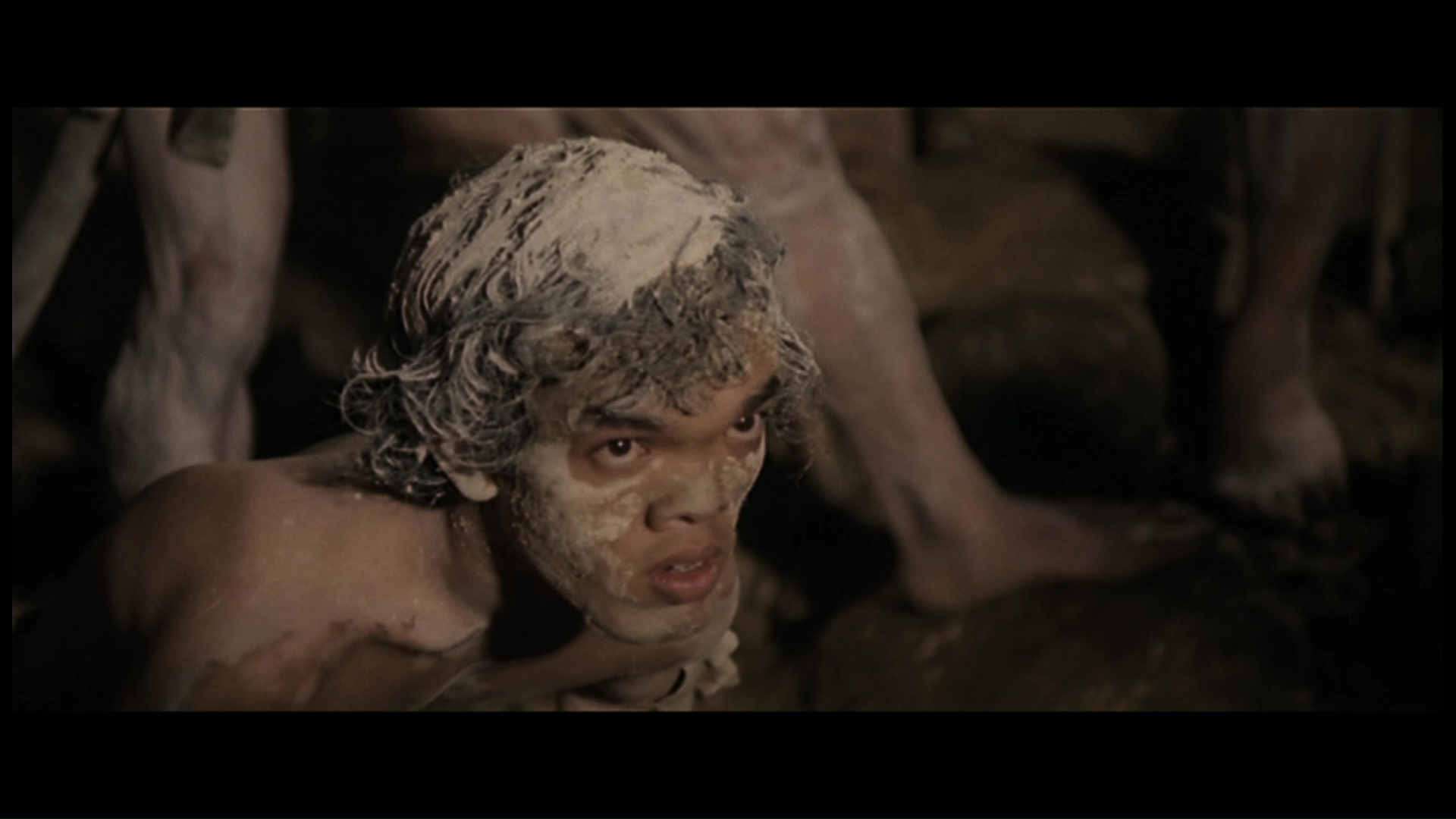 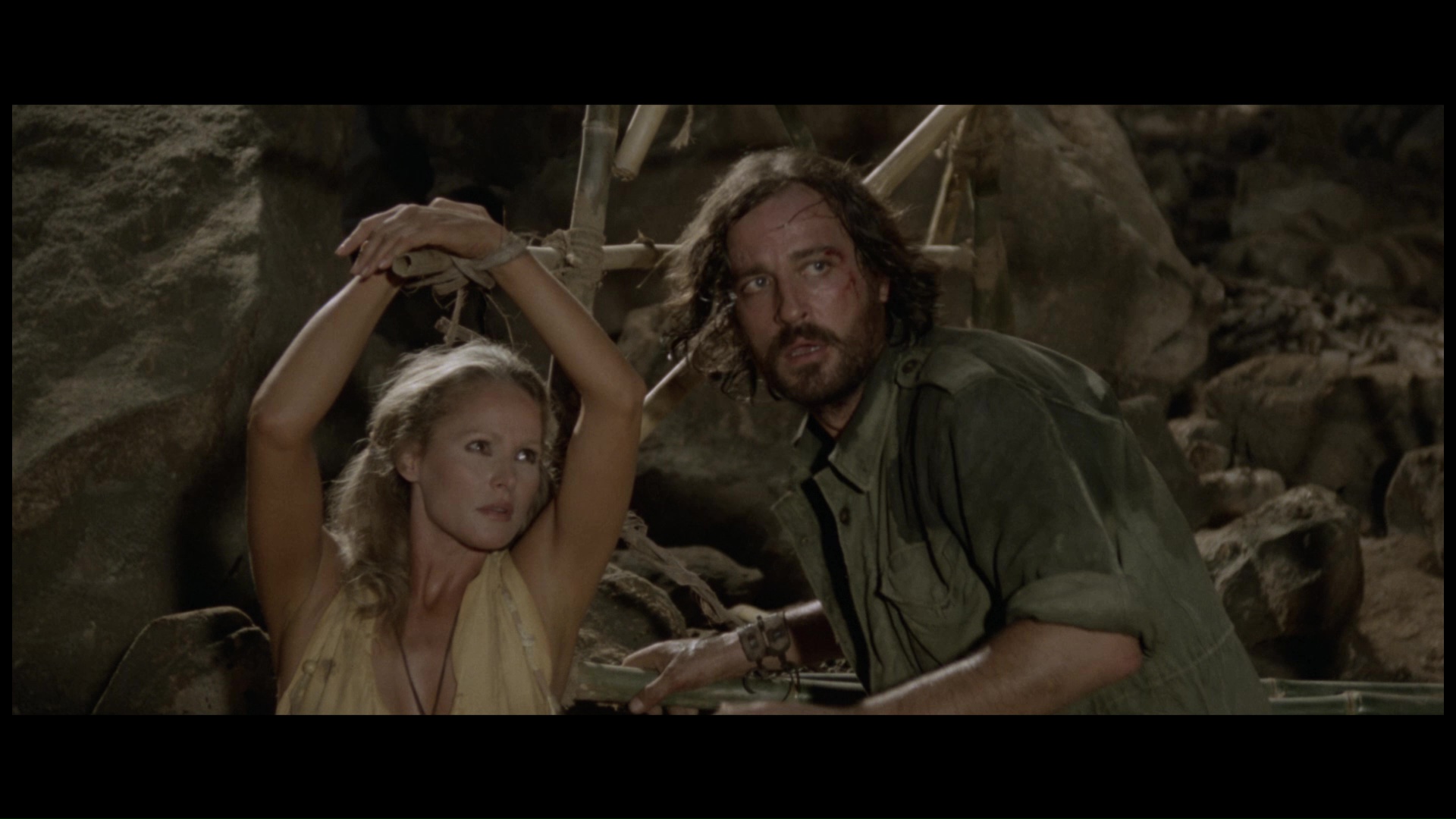 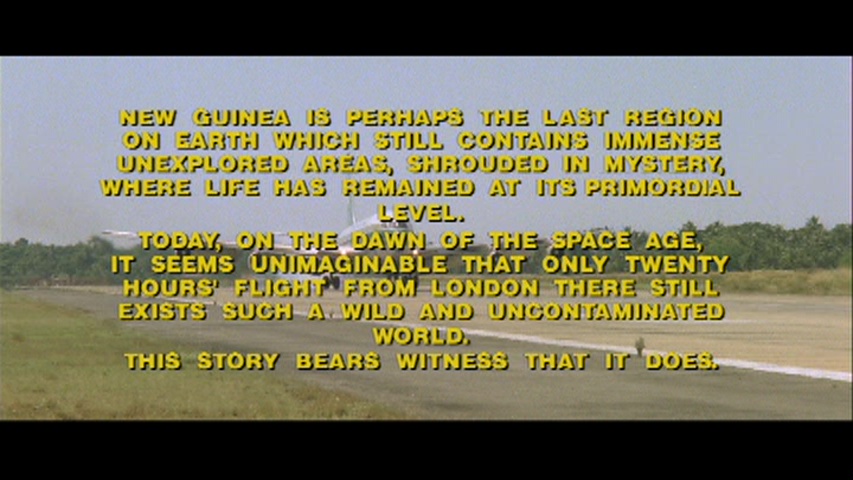 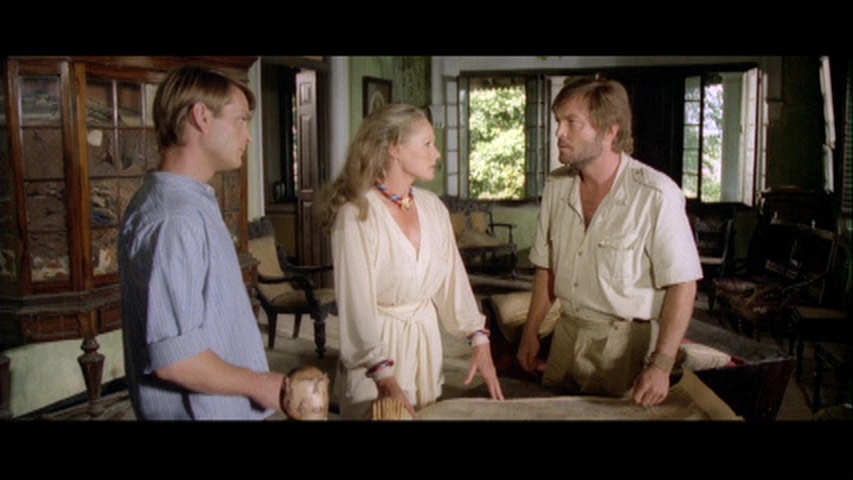 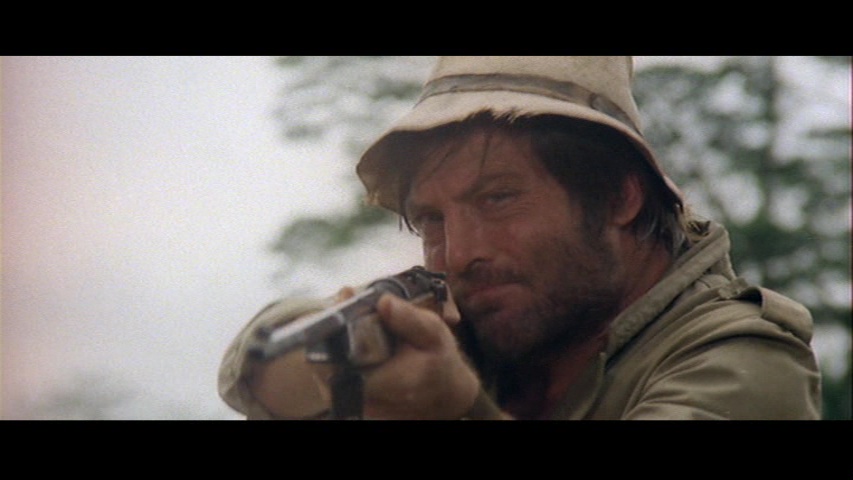 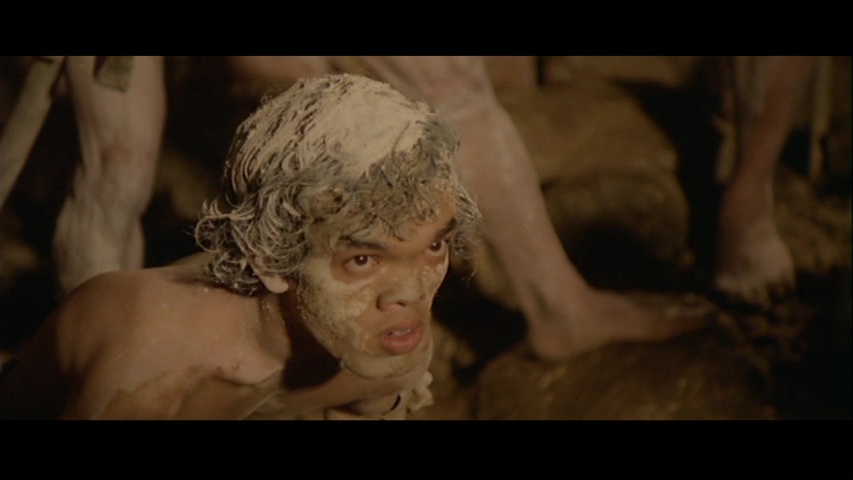 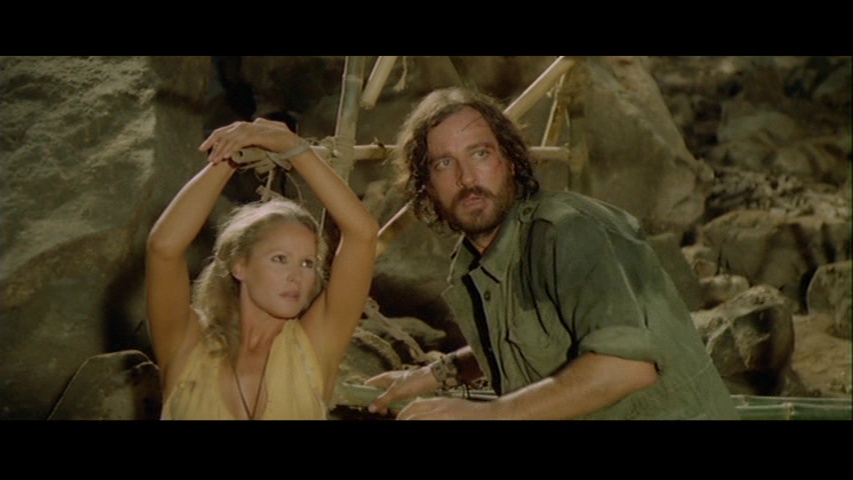