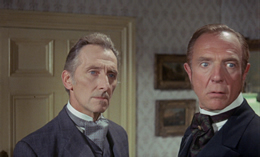 For a relatively short but glorious period, Britain was overrun with studios churning out what seemed like a new horror movie every week. Hammer led the pack of course, while one of its competitors during the relaxing censorship standards of the late '60s was Tigon, who cranked out titles like Witchfinder General and Blood on Satan's Claw. One of their few multi-film dire 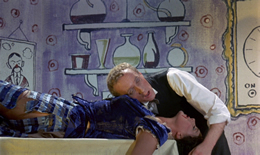 ctors was Vernon Sewell, sort of a filmmaker-for-hire for the past couple of decades who got his start working for Michael Powell. In 1968 he cranked out two horror films for Tigon; the first was Curse of the Crimson Altar, a kinky all-star H.P. Lovecraft adaptation, and the second was The Blood Beast Terror, a bizarre take on the she-creature formula Hammer had attempted with The Reptile and The Gorgon. Even Peter Cushing (who was vocally not a fan of the script) is on hand to give this period film a Hammer-esque appearance while lending some respectability to the story of a beautiful woman who's actually... a giant blood-drinking moth.

A string of bizarre deaths in a quiet Victorian village all seem to be connected to Professor Mallinger (The Horrible Dr. Hichcock's Flemyng), a respected entomologist who lives with his blonde daughter, Clare (Ventham). Since many of the victims are students of Mallinger's, the investigating detective, Inspector Quennell (Cushing), has an obvious place to focus his snooping... but even he couldn't begin to suspect that Mallinger is conducting dangerous experiments to produce a giant male death's head moth as a 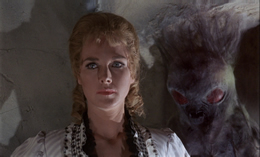 companion for Clare, who has a nasty tendency to transform into... well, you get one guess.

Most of the usual Tigon team is on board here including producer Tony Tenser (the company founder) and composer Paul Ferris, and the film manages to get some surprisingly elegant results out of its very tiny budget. Sure, the moth monster being created in secret doesn't quite cut it, but there's plenty of charm in the sheer weirdness of the concept. As much flack as this film gets fo 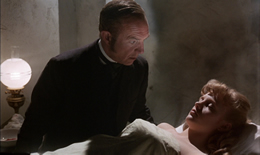 r its unconvincing beasties, what's interesting is that artificiality seems to be a recurring theme throughout ranging from a gag involving a fake rubber spider to a tiny theatrical production performed on deliberately simplistic drawn sets. Perhaps acknowledging the surreal nature of the story itself, there's no attempt at realism here; the cliches of the monster genre are deliberately heightened and played for fun, with only a little bit of grue here and there in a surprising move for '68. This actually received a G rating in the US, but then again that same rating was also slapped on Dracula Has Risen from the Grave which has blood gushing like a broken fire hydrant. This one also gets a spot in the history books as the feature debut for the beautiful Vanessa Howard (as Cushing's daughter), who went on to star in such films as Girly, Here We Go Round the Mulberry Bush, and the still sadly-neglected What Became of Jack and Jill?

Another factor in this film's less-than-stellar reputation is its shoddy condition over the years; it was often shuffled off in substandard prints for double features throughout the '70s, and home video versions were all pale, murky, and heavily damaged. The flat Image DVD (mildly letterboxed) looked downright sickly, and the UK disc wasn't much better. For the Redemption release issued through Kino on both DVD and Blu-Ray, the latter option is almost insanely good; the negative's apparently been left untouched for decades and looks leagues better than anything seen on video before. Damage is extremely minimal, and the colors are much bolder and more stylish than ever before. It's a much more pleasurable film to sit through in this state, and while no one will ever peg it as a classic, this is pure popcorn fun if you're in the right frame of mind. Extras include the European theatrical trailer (the US one under the title The Vampire Beast Craves Blood would've been fun, too) and a stills gallery, plus bonus trailers for other Kino/Redemption releases like The Asphyx and Killer's Moon.