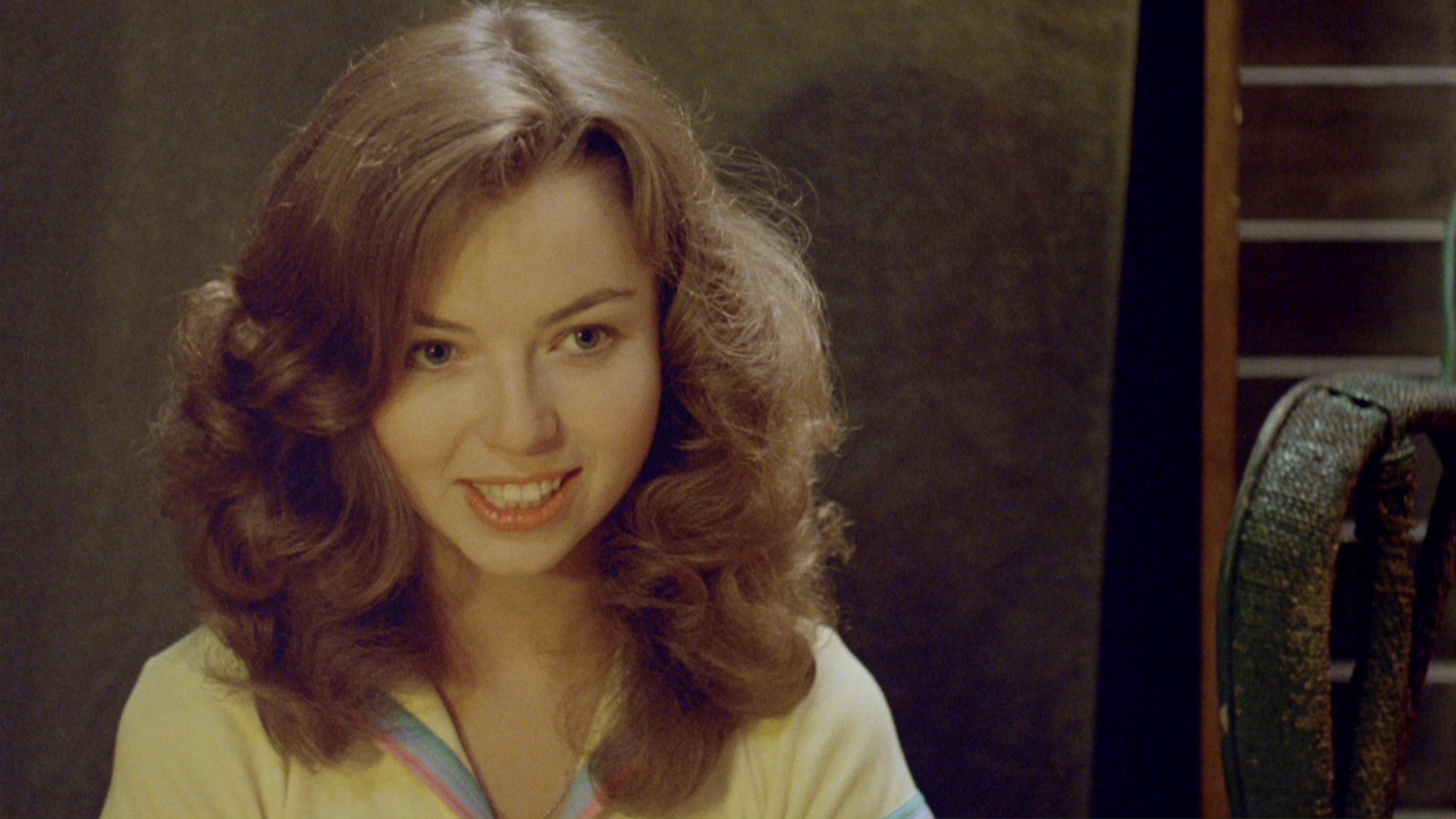 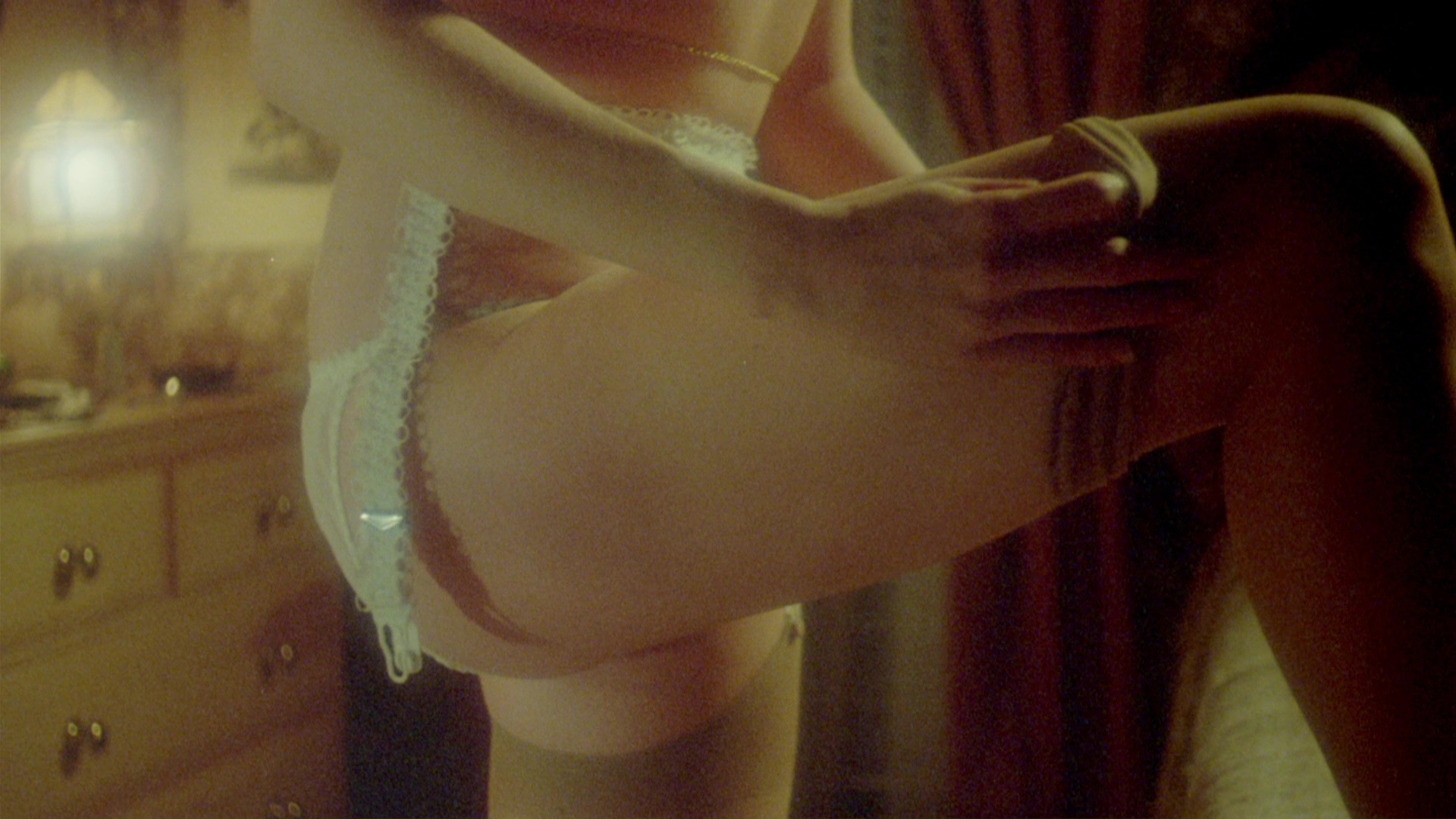 Anyone familiar with the excellent documentary Not Quite Hollywood is already aware that Australian exploitation films exploded in the '70s thanks in large part to the arrival of sexploitation films, with homegrown titles quickly churned out to compete with the saucy imports pouring in from Europe. One of the key names from this period is John Lamond, a director/producer who aimed for controversy in 1975 with his naughty mondo documentary, Australia After Dark. He proceeded to mine this vein of filthy gold with subsequent films like the oft-censored The ABCs of Love and Sex - Australia Style, Nightmares, and Pacific Banana, then switching to more mainstream fare as home video ate up the market.

Blatantly inspired by the success of both Emmanuelle and Bilitis, the 1979 Aussie softcore comedy Felicity (no relation to the '90s TV drama) follows the title character, a Catholic schoolgirl (Prey's Annen), as her budding sexuality prods her to go ballistic during a trip to the Far East. There she gets molested by a stranger while spying on a lovemaking couple, gets schooled in sex by local sexpot Me Ling (Flynn), and even finds a potential love interest in the form of a globe-trotting photographer, Miles (Milne).

Unlike many sex comedies which tend to be rather sexist and sniggering, this one is good-natured and fair to both sexes, with Annen making an attractive 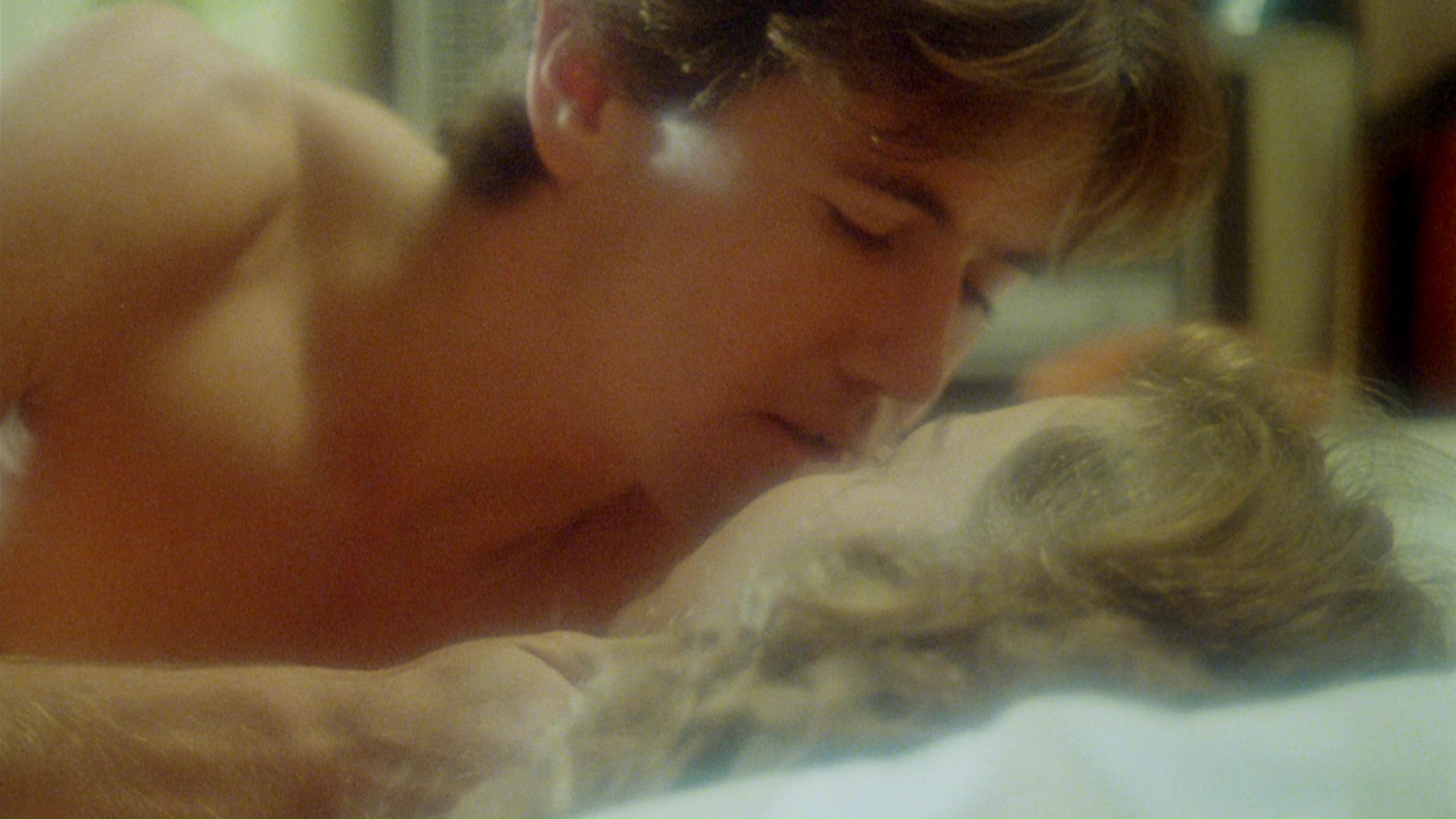 and sympathetic lead who never comes off as calculating or stupid. The music is bouncy and enjoyable (with a great theme song you'll be humming for hours), the direction keeps things bopping along nicely, and it doesn't end with any tragedy or moralizing, thank goodness. 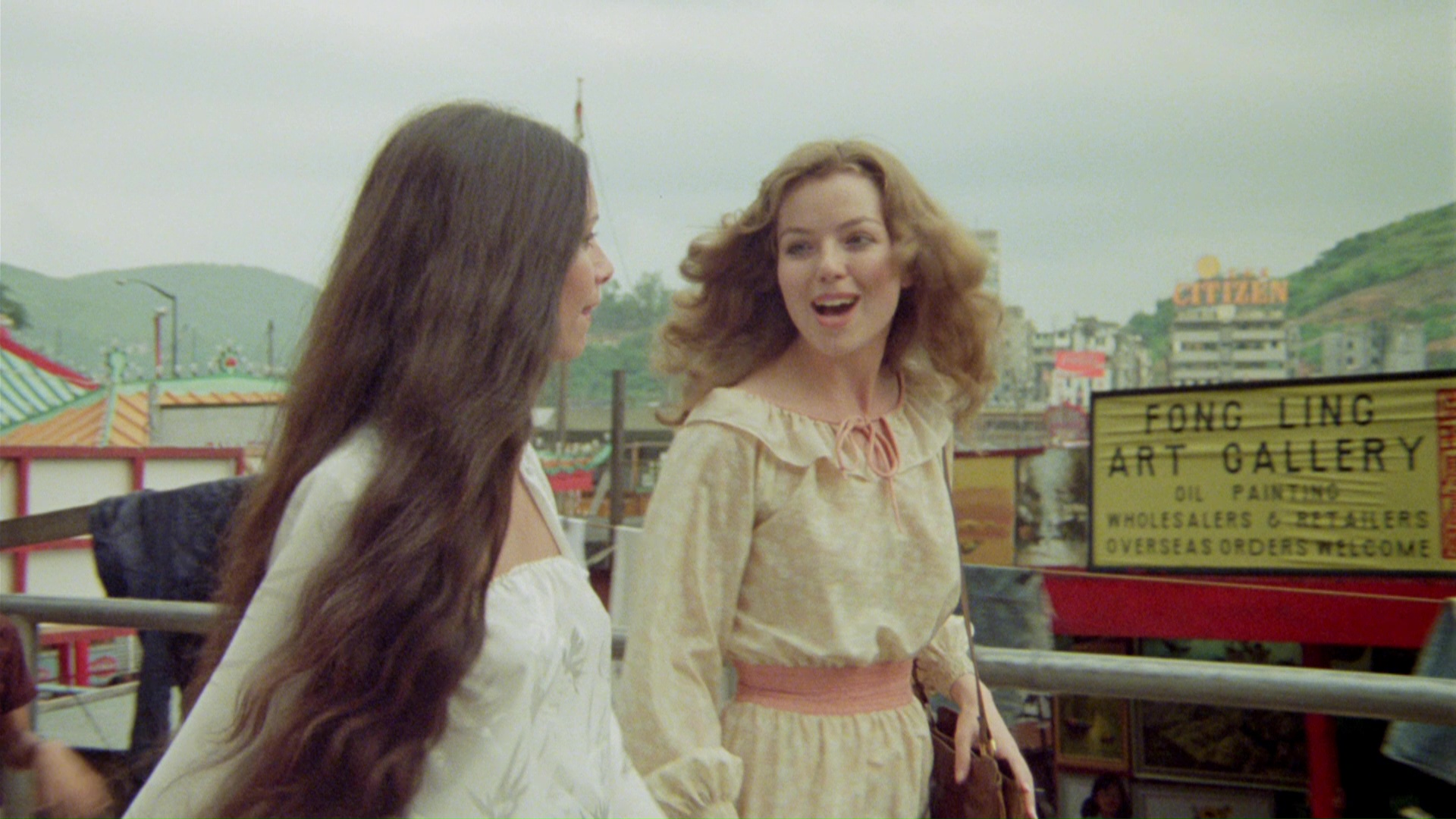 Severin bowed this film on North American DVD in 2007, which also marked the American debut of the longer director's cut with some additional saucy footage (including a couple of eyebrow-raising groin close ups). Lamond and Annen turned up for an entertaining commentary track; both sound quite proud of the film and look back on it with fondness, talking about the location shooting, dealing with the heavy amounts of nudity, and their careers ever since. Other goodies include the theatrical trailer and a still gallery.

In 2016, Severin decided to upgrade Felicity to Blu-ray (the transfer looks fine given the pretty modest nature of the film, which sometimes relies on insufficient natural lighting but generally looks clean and colorful) and added on to two of Lamond's earlier, more outrageous films, which were previously issued on DVD as special-ish editions from Intervision in 2011. Structured much like its predecessors like Mondo Cane using a narrator and a string of colorful, staged incidents, the episodic Australia After Dark purports to reveal what sorts of weird, shocking behavior people really get up to when no one's paying attention Down Under. Wanna see a black magic ritual with a green-skinned guy writhing atop a naked female disciple? Check. Nude group body painting? Yep. A topless woman scuba diving in the Great Barrier Reef? You betcha. Sure, there are a few obligatory nods to gross-out dining habits like cooks simmering live grubs in flour and hacking up snakes for hungry patrons in the outback, but the main focus here is sex, sex, sex. You'll get revealing burlesque acts, campy drag queens, a moustached businessman who unwinds every day in a tiled personal pool with a couple of pretty

handmaidens, and believe it or not, two guys getting married in Perth, the gay capitol of Australia (apparently before Sydney took over that crown). Okay, that last bit's not shocking at all, but the hairstyles and fashions certainly are. You also get to see UFO nuts showing off their photos of alien visitors, not to mention aborigines doing nothing much more appalling than chugging beer. It's neither particularly well shot or skillfully edited, but for a snapshot of a time period when the area was just finding its feet in the sexploitation market, this is definitely a skin-packed time capsule like no other.

That film's successor made three years later, The ABC of Love and Sex - Australia Style, is changed for Americans to The ABCs... on the DVD cover and listed without the Australia Style on the Blu-ray. The concept here is exactly what you'd expect, an alphabetical countdown from A to Z highlighting different aspects of human sexuality. "A" is for Anatomy, "C" is for Contraception, "G" is for Genitalia, "K" is for Kiss, "R" is for Rape, and so on. The result is a frothy but sometimes very explicit mixture of go go girls dancing to groovy KPM library pop music (including some that will sound familiar to fans of Barbara Broadcast), a stop motion animated instructor named Leonard B. Lovitt lecturing his pupils, arty softcore montages, a manly and very scary-looking female expert from the Swedish Institute for Sexual Research, rampant nudity, and even a couple of sequences using Swedish sex show performers. Oh, and everything's structured around these giant letter blocks mixed in with arbitrary insanity like a huge stop-motion ceramic phallus. Once again you get a very early, very silly '70s glimpse at gay life (a few mincing boys followed by a long lesbian sex scene), and every time those naughty Swedes show up, the film launches into discreetly filmed but definitely unsimulated and pretty startling sex footage, three minutes of which wound up on the cutting room floor before this hit screens in Australia. That edited version was the basis of the PAL VHS which was the only source copy for decades, at least until the film was finally restored to its uncut version for DVD release.

Both of these films appeared first in Australia from Umbrella as a double feature, but Intervision has presented them in standalone editions before they tamed up on the Blu-ray (still in SD). ABC definitely fares better in terms of picture quality, looking very clean, vibrant, and well framed throughout with just some very minor print debris here and there. Colors look gorgeous, with an emphasis on vivid primary hues and, of course, robust flesh tones. The catchy stock music also sounds just fine; no real

complaints here. After Dark looks much rougher, obviously taken from an older and less pristine master

with drab colors, smudgy detail, and plenty of analog-related master issues. It's watchable in an '80s TV broadcast sort of way, but don't expect much more. However, it's never looked any better on video and is complete, so think of it as the grubbier cousin to the much more satisfying presentation of its later co-feature. Both films come with a Lamond commentary track moderated by Not Quite Hollywood director Mark Hartley, who also helmed the awesome Machete Maidens Unleashed! and the cursory but welcome Electric Boogaloo: The Wild, Untold Story of Cannon Films. It's probably best to listen to them in sequence as they tell a fun story about the evolution of Australian censorship and film production, with anecdotes about medical sex films at drive-ins, the rise of nudity in film and theater in the '70s, the sudden popularity of sex comedies in Australia, the identity of the guy who did that crazy Rankin-Bass-imitating animation sequences, the surfeit of pubic hair in the films, and the reason Bambi was banned in Sweden.

The packaging for both films on DVD indicated a Lamond trailer collection as well, though this was either absent or incredibly well hidden. However, it does turn up on the Blu-ray with trailers for Nightmares, Pacific Banana, Felicity, The ABC of Love and Sex, Sky Pirates, and Breakfast in Paris. Exclusive to the Blu-ray is a one-hour(!) batch of interview outtakes from Not Quite Hollywood with Annen, Lamond, and cinematographer Gary Wapshott including some very funny anecdotes (Annen watching Felicity in a theater with her grandmother in London, thoughts on a sequel, etc.). Lamond also has a topless stripper shimmying around on a pole behind him the whole time, which is quite entertaining and should be employed on all future special features from the Criterion Collection.