Unquestionably the most confusing entry in the Audubon Films erotica catalog, Soft Skin on Black Silk began life as a slightly sexy European co-production called Tentations in France and Un mundo para mí in Spain. The cast, headlined by rising sex kitten Laurent, was a mixture of French and Spanish actors, and the mixture of mild criminal intrigue and sexy teasing (without any overt nudity) was fairly standard for the time in the wake of 1956's And God Created Woman. Flash forward to 1963, when the film made its English language debut in a drastically altered version 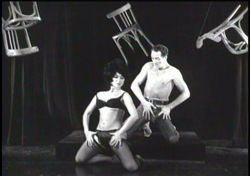 entitled Soft Skin on Black Silk, boasting a new beachside framing narrative and inserted striptease footage with many scenes from the original cut altered or deleted entirely. The new footage was directed by Audubon founder Radley Metzger, soon to be an acclaimed director in his own right, and the spliced-in actors were appropriately dubbed to match the looping in the body of the film. Billed as "a sexual romance," the film successfully cashed in on the craze for European sauciness and, as far as patchwork cinematic quilts go, it's not half bad. 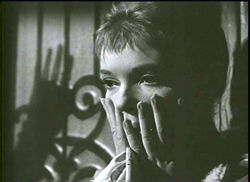 In the prologue, a young man (Ira Lewis from the Metzger-edited The Flesh Eaters) comes across a beautiful woman (Edie Burke) sunbathing topless by the ocean. They strike up a conversation and she learns that he's planning to off the unfaithful woman in his life, so naturally she leads him back to her beach house where they fall into bed. Their antics are intercut with her telling a similar story of dangerous amour, as beautiful French moll Theresa (Laurent) catches the eye of handsome Andre (Vicente Parra) at a nightclub. Unfortunately she's the property of gangster Jean (Mestral), and soon's Andre's planning to off his rival to claim the woman who has stolen his heart. 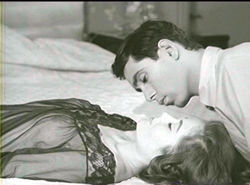 different video sources to assemble the longest cut of Soft Skin released to date; the expanded running time results in a few burlesque bits crowding awkwardly against each other but overall this is a more smooth, coherent experience than the edited print which circulated on VHS.

Quality-wise the DVD is understandably something of a mixed bag. The footage from the Audubon version fares best, apart from a brief but distracting fluttering at the top of the frame in the opening shot. The inserted French scenes tend to look softer and sport a slight beige hue compared to the pure black and white of the rest of the film; at least it makes it easier to spot the longer scenes. The credits have been newly generated via computer over a static title card, presumably because the older credits wouldn't cut smoothly into the longer cut now. The dubbed English audio sounds fine, though not surprisingly it's more distracting than usual for an Audubon title due to the weird hodgepodge of actors. Extras include the Tentations French trailer, the amusing US trailer (with a female narrator repeatedly cooing the title), a photo gallery of production shots of Metzger directing the new scenes, the usual Audubon trailer reel (The Nude Set, The Libertine, etc.), and for no obvious reason, a comparison of Laurent's alternate shower scenes found in The Twilight Girls.