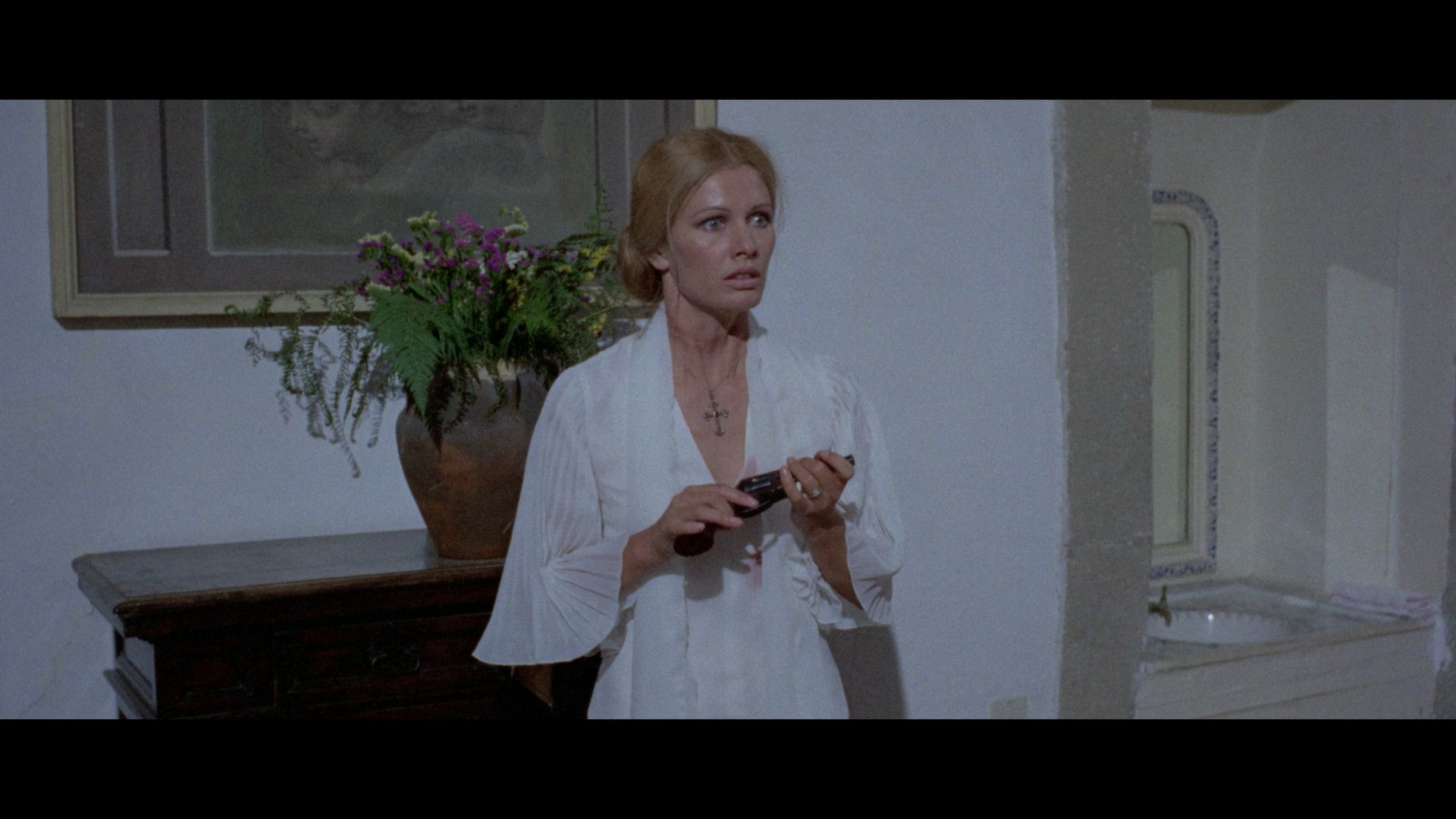 all the familiar giallo titles successfully 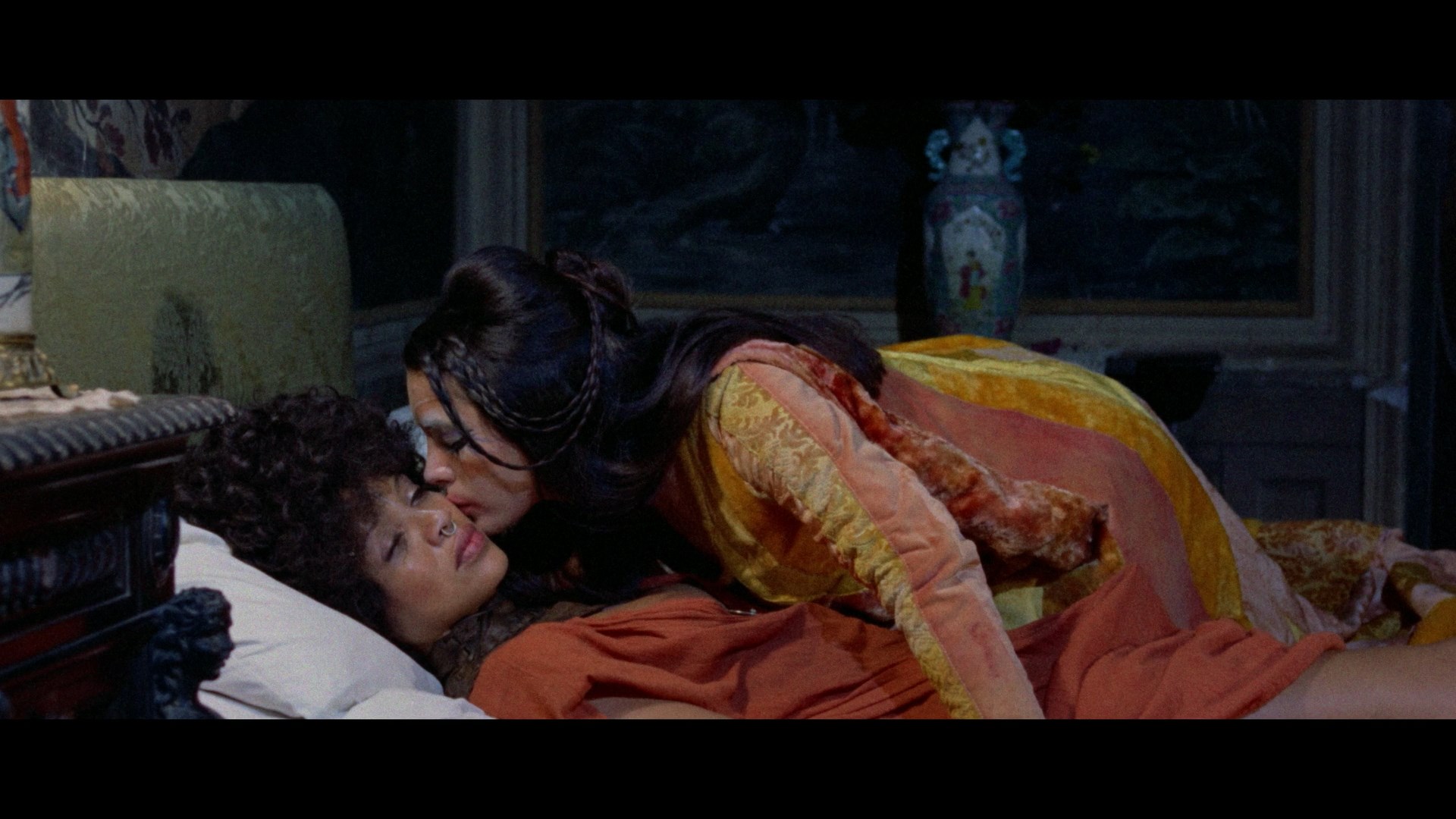 exported to English-speaking countries in the 1970s from the likes of Dario Argento and Sergio Martino, it seems there were just as many Italian thrillers unfairly ignored and left to languish in obscurity. Some of these have resurfaced in the DVD era and earned a fan following, while others continued to linger out of reach outside of bootleg sources. One particularly tantalizing title is the 1973 film Un bianco vestito per Marialé, whose gorgeous music score (one of the best ever composed for a giallo) by composer Fiorenzo Carpi and arranger/conductor Bruno Nicolai has become far more well known that the film for which it was written.

Horror fans also have reason to give this one a look since it was the first genre film from director Romano Scavolini, who went on to helm the notorious slasher film Nightmare nine years later. At the time Scavolini was only known for his early experimental art films like The Blind Fly and The Dress Rehearsal, and in later years he went on to say that Spirits of Death was better forgotten and mainly a work for hire for him. It's actually a terrific film, the sort of outrageous fusion of horror tropes and flamboyant experimental techniques that resulted in some of the more memorable '70s shockers, and as anyone who's seen an interview with Scavolini can attest, his colorful opinions aren't necessarily the best point of reference. In any case, for some reason this film has been maddeningly difficult to see over the years with only a letterboxed Italian VHS transfer offering even a rough approximation of its original power; thankfully the 2013 release from one of the world's most fascinating genre labels, Camera Obscura, has corrected that situation and then some.

Our macabre tale begins with a young girl named Marialé experiencing the worst afternoon imaginable as her father drives her out to the woods and lets her watch as he pumps bullets into her unfaithful mother (giallo regular Stewart, aka Ida Galli) and her lover (Patrick Still Lives' Dei) before taking his own life. Flash forward to the adult Marialé, now played by Stewart as well, who lives in a gothic 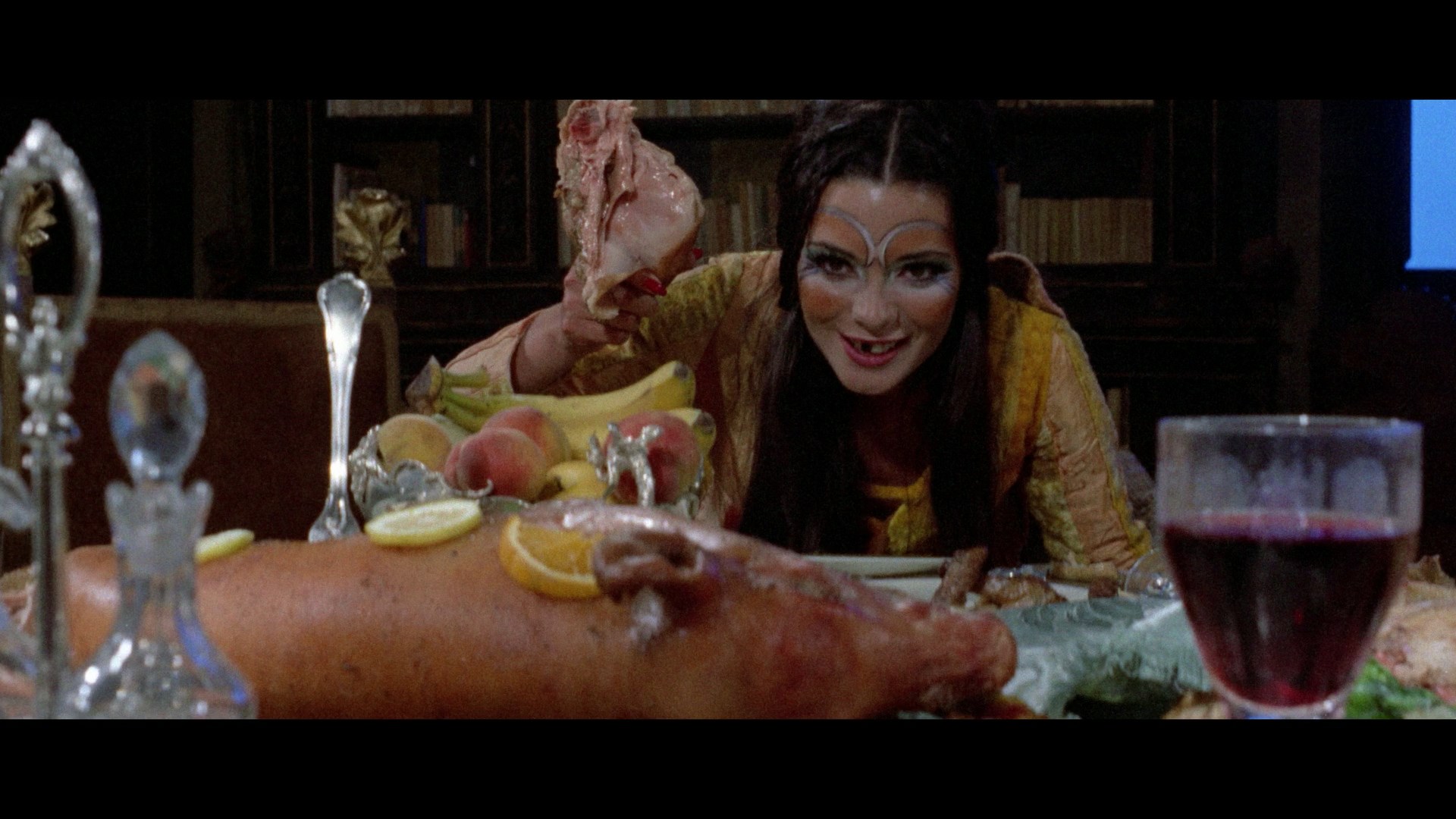 castle with her domineering husband, Paolo (Bay of Blood's Pistilli). He keeps her inside at all times, much to her emotional distress, and apparently feels she's too unstable to mingle with the rest of society. However, Marialé decides to 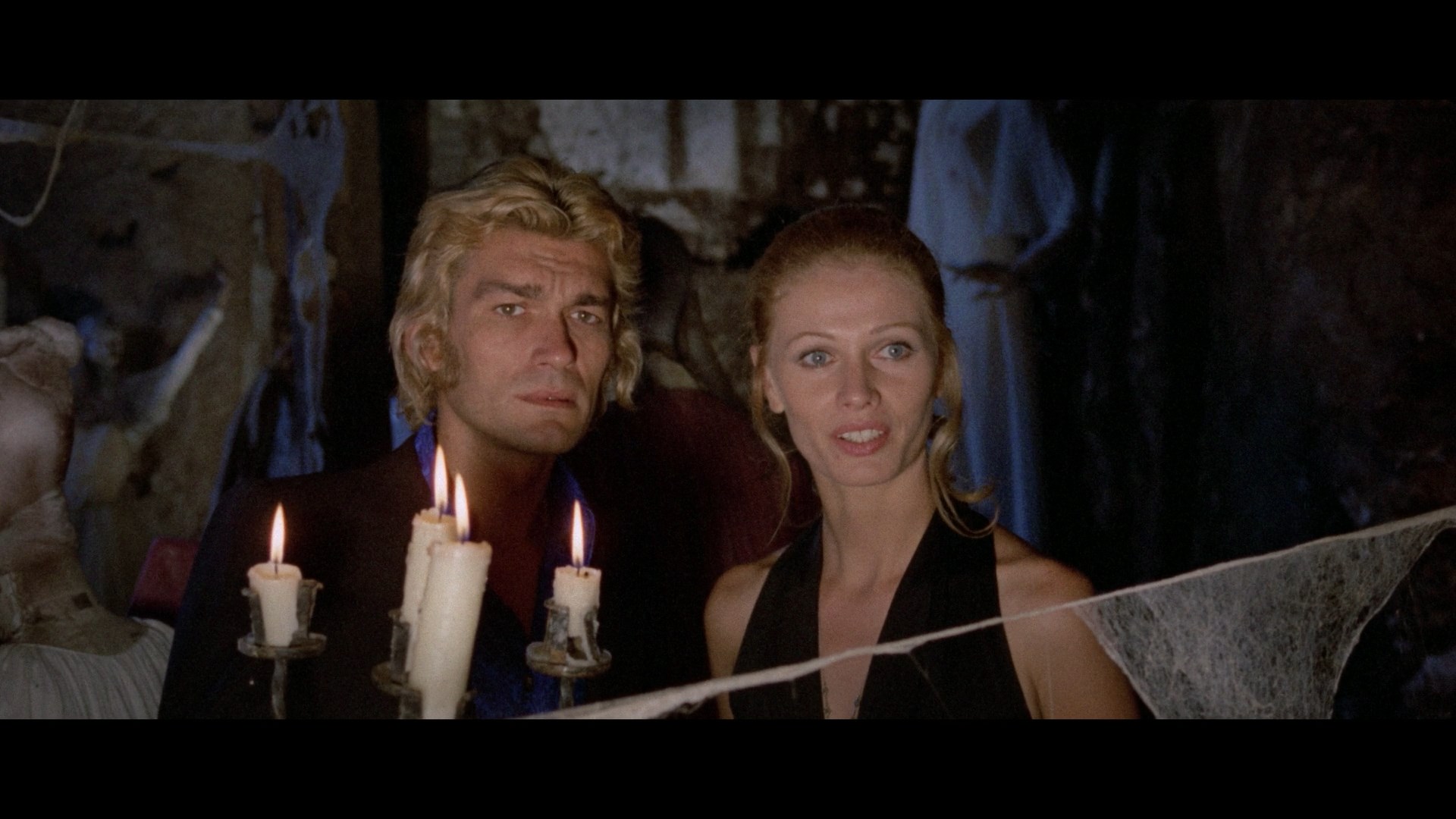 rebel by inviting a group of friends over for the evening without his consent, and when they show up, he begrudgingly goes along. Among the arrivals are her friend Massimo (All the Colors of the Dark's Rassimov), for whom she might feel a bit more than she's letting on, and other colorful characters like spitfire Mercedez (Velazquez) and a foot fetishist named Gustavo (Kim). They all decide to explore the castle and wind up in an underground chamber where they find some bedsheet-covered mannequins, one of them wearing the bloodied white dress worn by Marialé's mother at the time of her murder. (Incidentally, the Italian title translates as "A White Dress for Marialé). Our heroine decides to wear it to dinner that night, which quickly turns into an orgy of face painting, psychedelic rock music, free love, and more than a couple of savage murders.

Giallo fans should get quite a kick out of this film, which opened the same year as the somewhat similar Sergio Martino film, Your Vice Is a Locked Room and Only I Have the Key, which also featured Pistilli as a controlling husband, a string of murders, and a naughty dinner bacchanal involving a black woman as the erotic centerpiece. In the case of this film, that role is played by singer Shawn Robinson (in her only film role), best known for crooning on several Piero Piccioni '70s soundtracks. Here she gets to run around the dining room mostly naked except for a strap-on, which isn't the most common way of breaking into show business. Significantly, Scavolini also served as his own cinematographer here, and the results are very impressive. It's a gorgeous film from start to finish with striking scope compositions throughout as well as vivid use of symbolic color, especially the all-important white and red along with bright splashes of blue. 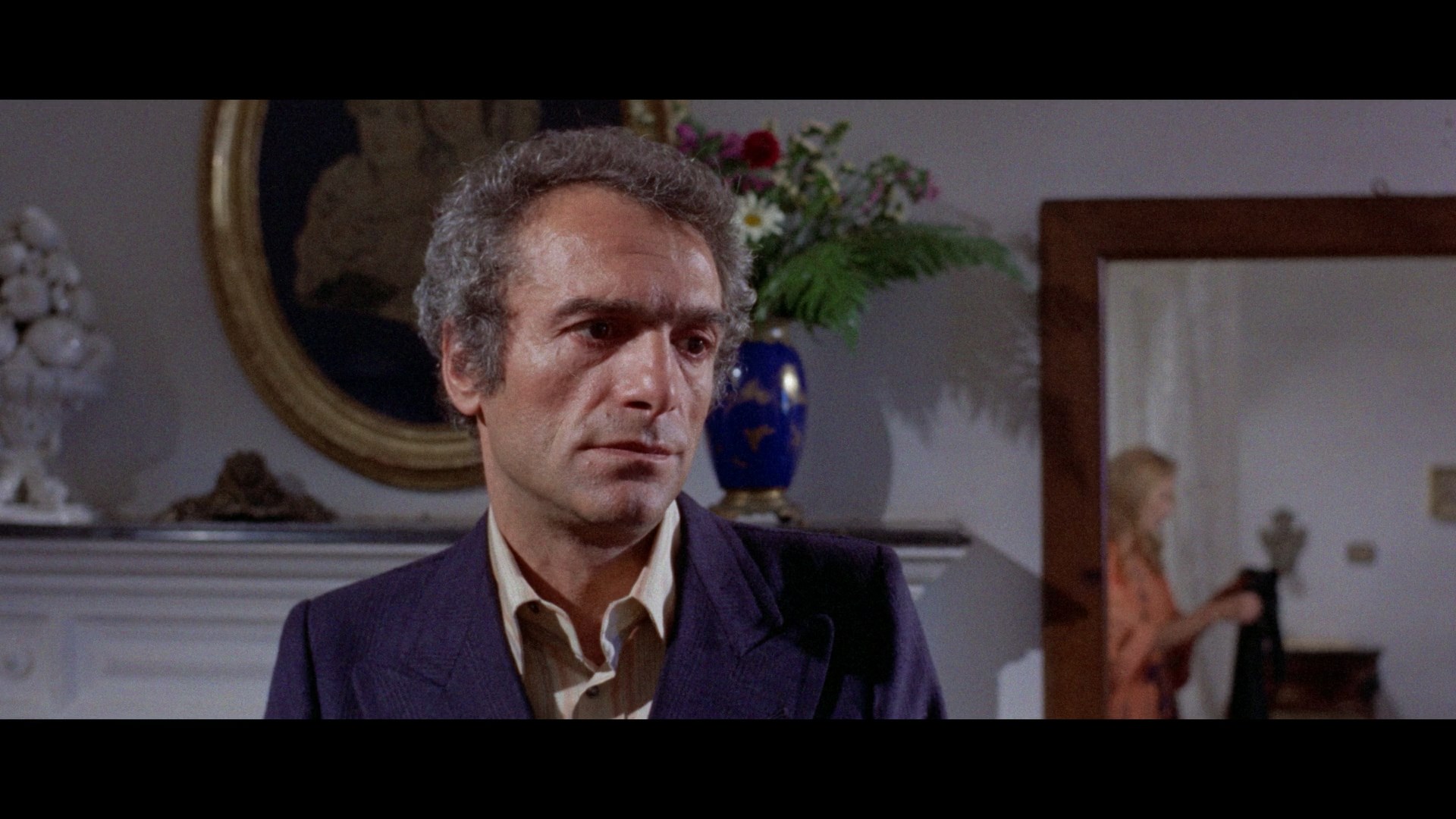 The first official release of this film in decades, the Camera Obscura DVD looks terrific and up to their usual transfer standards. There's really nothing to complain about here; the film elements have been kept in spotless shape, and the quality here is light years beyond the old VHS version fans have had to put up with for years. The Italian 2.0 mono track also sounds very good, especially when it comes to Carpi's score, and optional subtitles are included in both English and German. There's also a fine audio commentary (in German with English subtitles) by label regular Christian Kessler and Marcus Stiglegger, who immediately refute Scavolini's dismissal of the film and cover the ins and out of the cast and crew while observing its often jolting visual flair. Considering their excellent track record with this film and previous gialli (like Forbidden Photos of a Lady above Suspicion, Tropic of Cancer, and So Sweet, So Dead), there will still be plenty of future treasures to come. (A few suggestions, cough cough: La contrafigura, Pensione Paura, In the Eye of the Hurricane, and Queens of Evil.)

The rest of the extras are worthwhile as well, highlighted by a 36-minute interview featurette with Scavolini entitled "Esoteric & Cryptic" (whose meaning only becomes clear at the very end). He's very gregarious here and covers several decades in his career from his early avant garde work (including some technical film snafus) to his stint as a Vietnam war photographer, though obviously most of the time is focused on this film. He clarifies his previous disparaging comments, saying he thinks it should only be forgotten as part of his filmography, and explains how he only took the assignment under the condition that he extensively rewrite the script. Apparently the original version was more of a straightforward gory horror film, so Scavolini added the surreal banquet and orgy and made it more of an exercise in twisted psychology. (Don't worry, there are still several gruesome murders in the last act.) He also goes into the techniques he used to shoot the film in the comparatively limited Techniscope format but make it look like a much richer Panavision production, and yes, he briefly touches on Nightmare as well. He also lavishes praise on the Carpi score (including a cue he requested to sound as much like "In-A-Gadda-Da-Vida" as possible) and reveals that the film's lyrical theme was used to launch maiden voyages of the Concorde! Also included are the Italian trailer, the French trailer (under the title Exorcisme Tragique!), four and a half minutes of minor deleted scenes, a photo gallery of stills and video art, and an English and German liner notes booklet containing a very involved scholarly breakdown of the film by Kai Naumann, who traces its gothic influences and symbolic elements. An exceptional release and a major cause for celebration for Italian horror aficionados.

Buy in the U.S. from Diabolik DVD