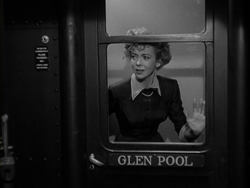 As the first wave of film noir darkness waned into the more domesticated suburban space-age thrills of the 1950s, something strange was happening in Hollywood, too. Dark, cynical thrillers and taboo-pushing horror films were no longer in vogue; instead moviegoers got glossy soap operas and outer space excursions. One studio specializing in the former category was Universal, who had reorganized into Universal-International after World War II. Directors like Douglas Sirk and stars like Lana Turner flourished in films containing what some perceived as a sly satirical, exaggerated undercurrent to their portraits of love and struggle among the upper (or at least upper-middle) classes.

Licensed from the Universal vaults, this four-film collection from Turner Classic Movies collects a quartet of fascinating mutations on the so-called "woman's picture," the woman-in-peril film. These became especially popular in the '50s and remained a perennial box office persence for decades, extending into the '60s and even well into the '90s with actresses like Sharon Stone and Halle Berry going through their paces as struggling women contending with men who are often far more sinister than they seem. The '50s didn't invent this subgenre, of course; even Hitchcock had dabbled with it in Suspicion in the '40s. However, there's no doubt the '50s brought it to a whole new level, as performers like Doris Day panted and shrieked their way through Universal films like Midnight Lace (which isn't in this set, but it's worth tracking down and would be right at home here).

First up, Ida Lupino (who became a pioneering female director in Hollywood and certainly knew her way around a noir or two) stars in Woman in Hiding as Deborah, a newlywed who begins to suspect that her seemingly perfect husband (Black Gunn's McNally) may have been more than slightly involved in the death of her father. He was the manager at dad's mill, and though she rejected him initially, his continued pursuit of her could have been part of a motive for murder. Her suspicions are confirmed when a woman from hubby's past, Patricia (Harvey's Dow), has some chilling news that sends Deborah faking her death and running for cover, only for a drifter (Duff) who recognizes her putting her escape plan in jeopardy. (Incidentally, Duff and Lupino married the following year and also appeared together in a more famous noir further down the line, Fritz Lang's While the City Sleeps.)

A crackerjack little thriller, this is a great way to start the set. The premise will seem more than a little familiar to many viewers since the same plot was recycled almost verbatim in Sleeping with the Enemy with Julia Roberts (with far more unintentionally hilarious results), and as usual, Lupino really gives it her all with a magnetic performance. A real rarity, too, it's been completely unavailable on home video until now, and its debut in this set comes with 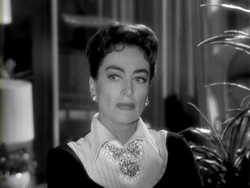 a slick full frame transfer (as intended) as well as a nice intro by TCM's Ben Mankiewicz (sporting spectacles here) who does his usual fine job of laying out the players and conventions of the film's genre. Other bonus material includes a detail TCMDb article, behind-the-scenes snapshots, and a batch of stills, lobby cards, and posters.

Next up is the most familiar title in the set, Female on the Beach, a Joan Crawford vehicle inexplicably ignored on home video but seen very regularly on TV. Here she gets plenty of close ups (and some pretty insane costumes, including a satin teddy) as Lynn Markham, a widowed socialite who moves into her late husband's beach bungalow right after the previous renter, Eloise, fell to her death through a broken railing onto the rocks below. Lynn's swarthy neighbor, Drummy (Chandler, a Universal it-boy for a while in films like the astonishing The Tattered Dress), steps right into her life and becomes one of the suspects in Eloise's death. Is Lynn in danger? Well, if she weren't, we wouldn't really have much of a movie.

Loads of fun with zero nutritional value, this is loads of fun from one of the strangest periods in Crawford's career (which also saw the even nuttier Sudden Fear soon after). Incredibly, this was adapted by Robert Hill from his own play; that's the same guy who went on to write The Beast of Hollow Mountain, Roger Corman's She Gods of Shark Reef, Sex Kittens Go to College, Confessions of an Opium Eater, and Russ Meyer's Fanny Hill! You also get a small but juicy supporting role for Natalie Schafer (aka Mrs. Howell from Gilligan's Island) and even a bit role for Ed Fury, the bodybuilding actor who went on to become one of the best peplum stars in Italy. The open matte transfer here looks just fine, better than most broadcast copies and nicely glossy presentation all around. An HD version of this

has also aired matted to 1.85:1, which works, too; most Universal films from this period (see most of their sci-fi output) were also shot with widescreen framing in mind but safely shot for a more square-shaped TV frame. Extras include publicity, wardrobe, makeup, and promotional stills, along with some posters, lobby cards, and behind-the-scenes photos.

Next up is the strangest entry in the bunch, The Unguarded Moment. Best known as the swimming star from numerous MGM musicals, Esther Williams made an unexpected switch to drama here (she didn't pursue screen acting much after this) as Lois Conway, a high school teacher surround 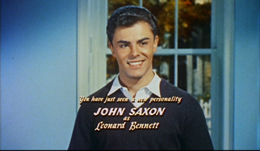 ed by men who are all apparently one beer away from committing a sexual assault. It seems there's a dangerous voyeur on the loose who's already killed one nearby lady, and when Lois starts getting some sinister letters, she fingers the apparent culprit: Leonard (John Saxon!), whose creepy dad (TV vet Andrews) seems to have issues of his own. Lois strikes up a possible romance with the investigating police lieutenant (Nader), but can he save her in time when the psycho decides to make his move?

A virtual trashy paperback splashed all over the screen, this heavy-breathing tale of high school thrills and chills is a perfect example of '50s melodrama. At times it feels more like a classroom scare film with a Hollywood star in a tight sweater tossed into the mix, and the results are pretty wild, to say the least. Williams actually does a commendable job here and looks terrific, while it's both amusing and kind of unsettling to see a very young Saxon brooding as one of the suspects. Unfortunately the elements for this one haven't been as treated as well as its companion features; it's presented flat letterboxed (1.85:1) with very soft detail and looks like it was yanked off a 16mm print to boot. If this is all Universal has left in its archives, that's a sad thought indeed. Well, at least the movie's a blast, and even in compromised form, it's an obscurity well worth

uncovering. Extras here are all image-related including the usual publicity and set photos along with posters, original artwork, and lobby cards.

Finally another silver screen legend, Merle Oberon (Wuthering Heights), goes through the thriller paces in The Price of Fear as Jessica, a femme fatale in the literal sense as she's responsible for a nasty hit-and-run accident that claimed two lives. She winds up crossing paths with Dave Barrett (Old Shatterhand himself, Lex Barker), co-owner of a racetrack whose operation is being muscled in on by the mob. Soon Jessica's trying to pin her crime on Dave, his business partner's trying to bump him, and the long arm of the law is closing in... with one fateful night left to sort out the whole messy tangle of criminal double crosses. The shortest movie by far in this set, The Price of Fear hums along through its twisty plot, doling out enough glamour and shadowy intrigue to keep things mysterious enough before delivering a very satisfying double whammy of an ending. Oberon's career was really slowing down by this point (she only had three more feature films left in her before retiring in '73), but she plays up her starring role here to the hilt with a slew of camera set ups straight out of a much bigger-budget star vehicle. This may not be a terribly exceptional film, but it's a diverting little puzzle perfect for a lazy afternoon.

The Price of Fear happens to be the only anamorphic widescreen title in the set, with an aspect ratio of 2.00:1 (an odd framing choice found in a handful of other Universal titles like The Phantom of the Opera). Image quality here is perhaps the strongest of the four, with a sparkling clarity that sometimes feels peculiar considering the seamier aspects of the story. Extras are the slimmest here though, including a handful of publicity and scene stills sparkled with some lobby cards and posters. The films each come on a separate DVD, and the four discs are packed into a case containing some very tight clasps and beautifully eye-catching cover art.