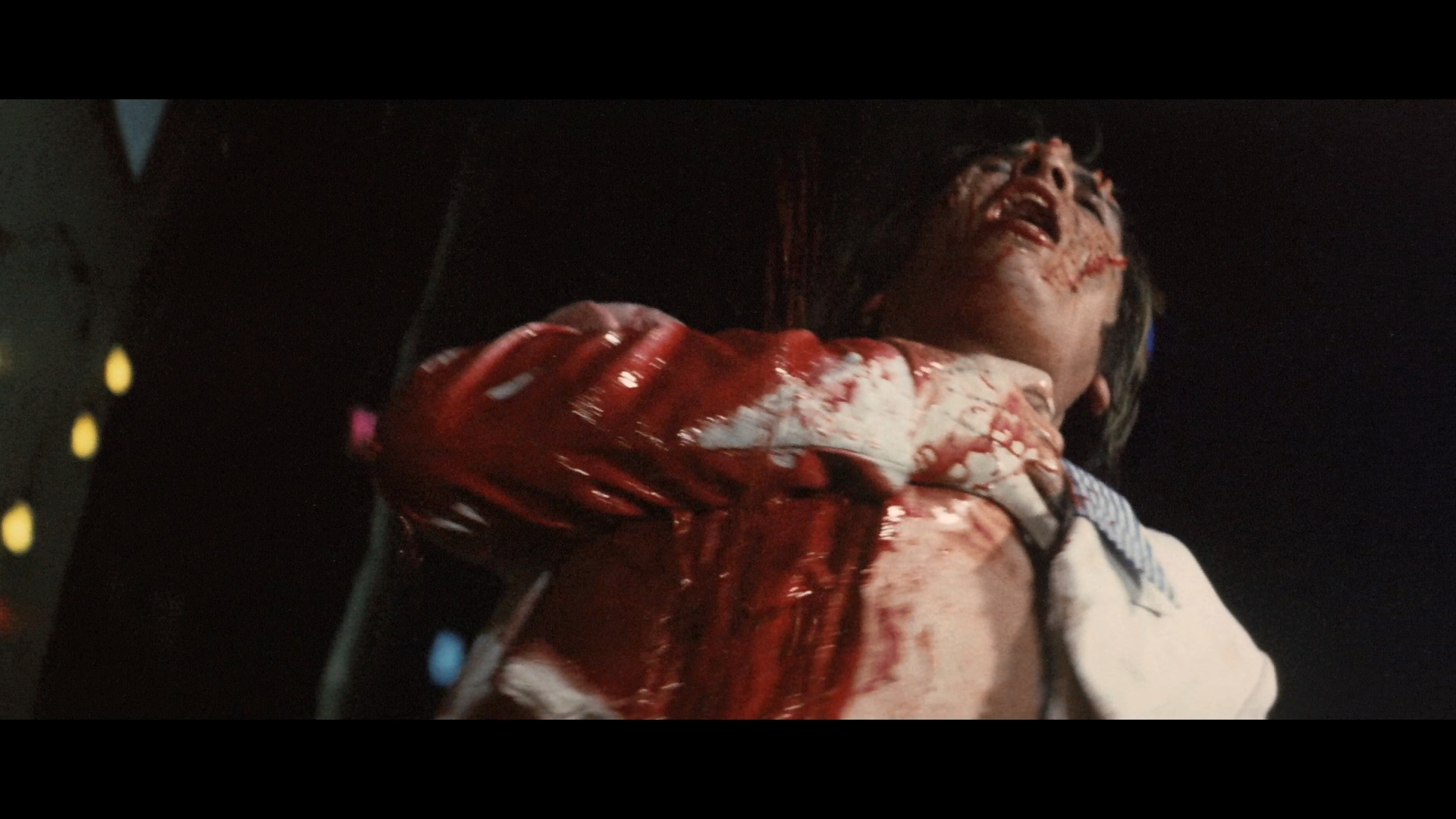 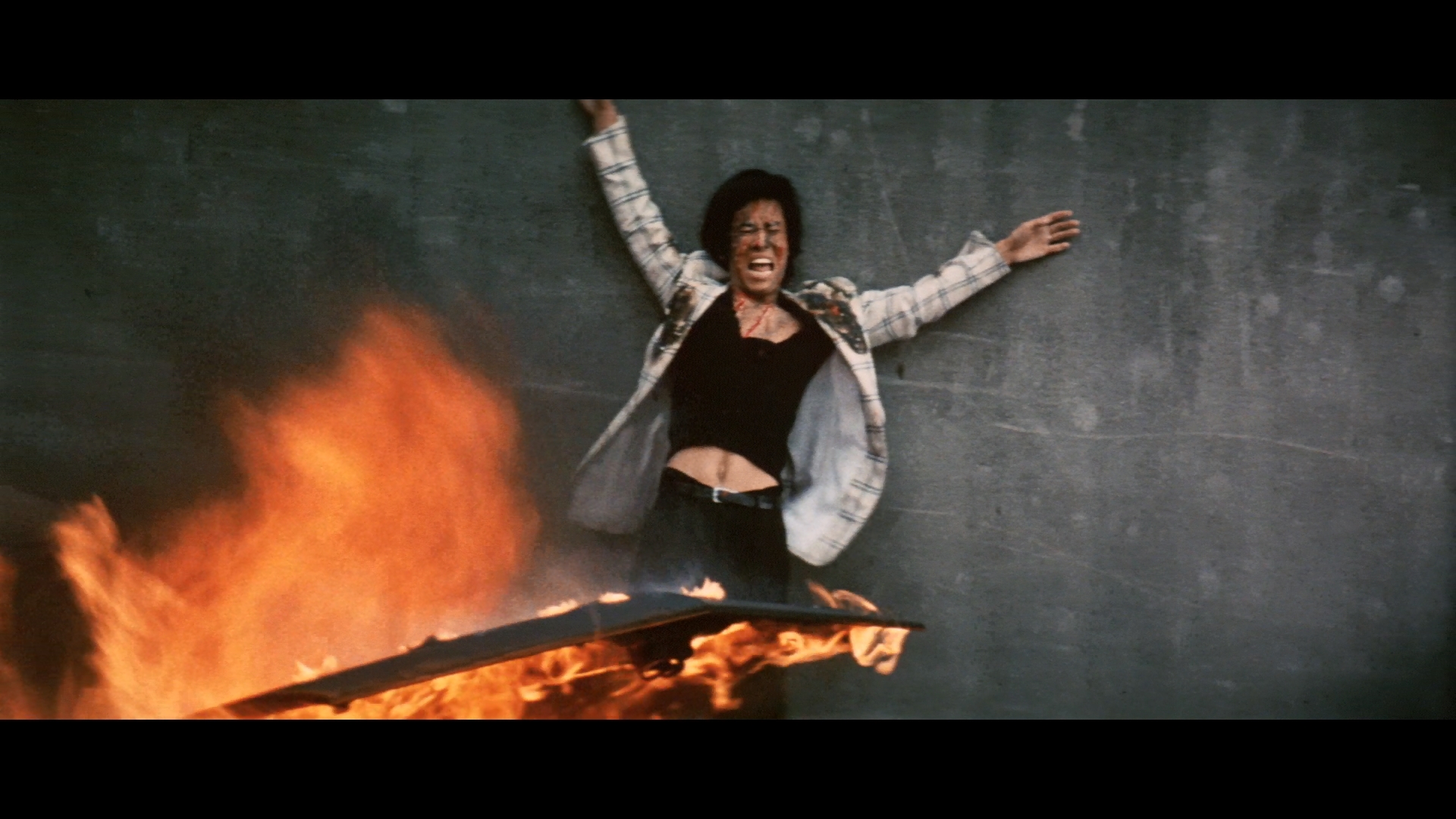 Inspired by a genre-bending manga series by 8 Man creator Kazumasa Hirai, this Toei action-horror hybrid is just one of the many wild, wild films starring Sonny Chiba that proliferated throughout the '70s and '80s. However, nothing can quite compare to the story of Chiba as a man-wolf who can take out an entire room of stick-wielding mobsters simply using his fists and his animalistic ability to somersault in the air.

Imbued with hypersensitive sight and hearing, Akira (Chiba) investigates crime on the streets of Tokyo -- which starts off on a rip-roaring note when a panicked man thrashes in the middle of a crowd screaming about a tiger hunting him down, only for his face and chest to erupt into a shredded, bloody mess. Theories run rampant that a ghost tiger is on the loose on the city, and Akira decides to prowl through the crime underworld to find out what's really going on. Along the way you get a striptease routine on a table and a nightclub singer who howls, "Rip and tear, rip and tear apart / It's your destiny to die insane" while perverted Japanese businessmen smack her with rolled-up newspapers. Thanks to a blood-spattered 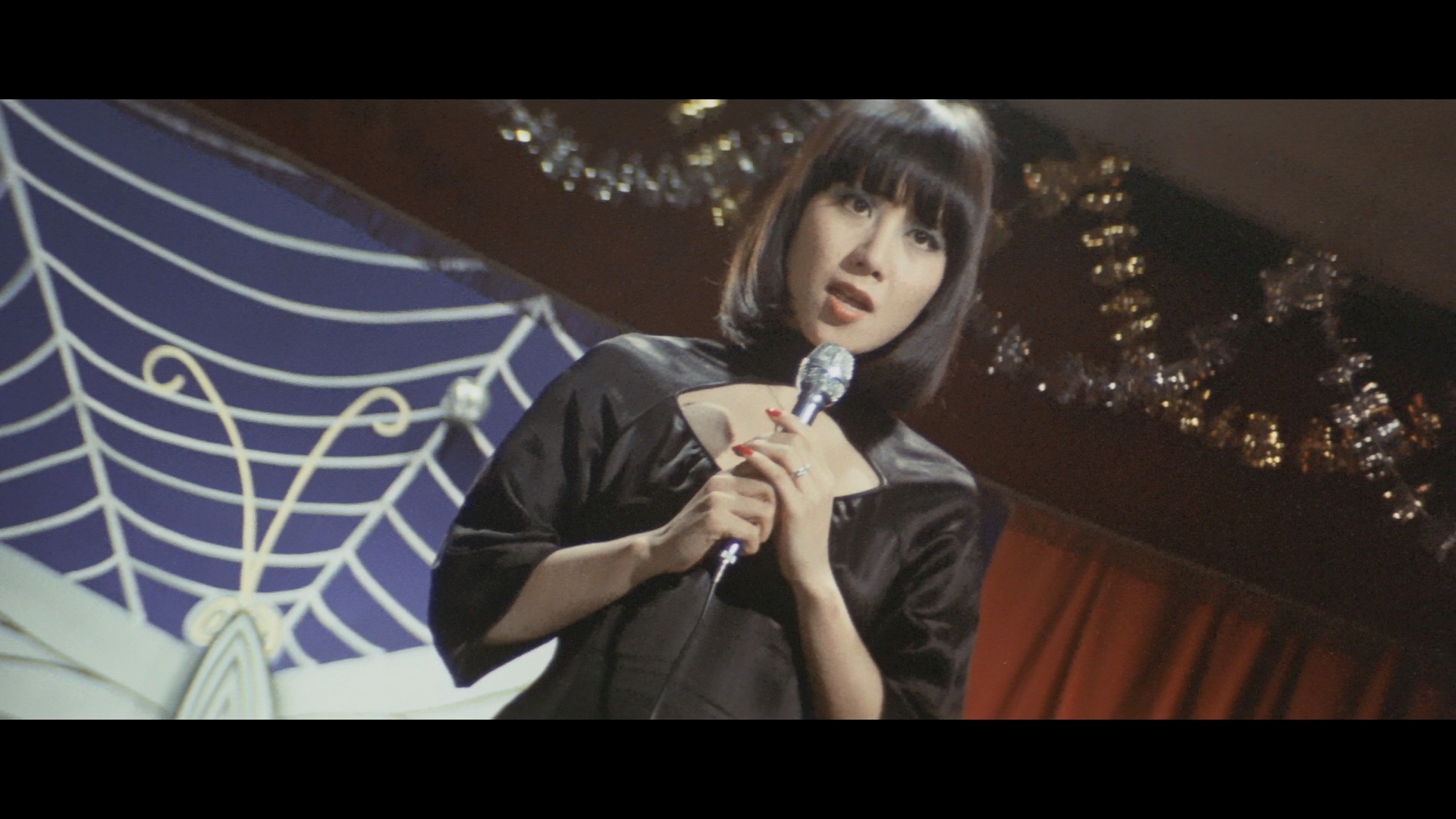 diary he finds out about aspiring singer Miki, whose romance with a respectable son of hyper-conservative bigwig Fukunaka made her a target of a leather-clad gang (complete with their own drummer) who gang rape her and infect her with syphilis, complete with photographic evidence that sends her into a suicidal spiral. Now a gang lord named Manabe is doing the bidding of a higher, more nefarious 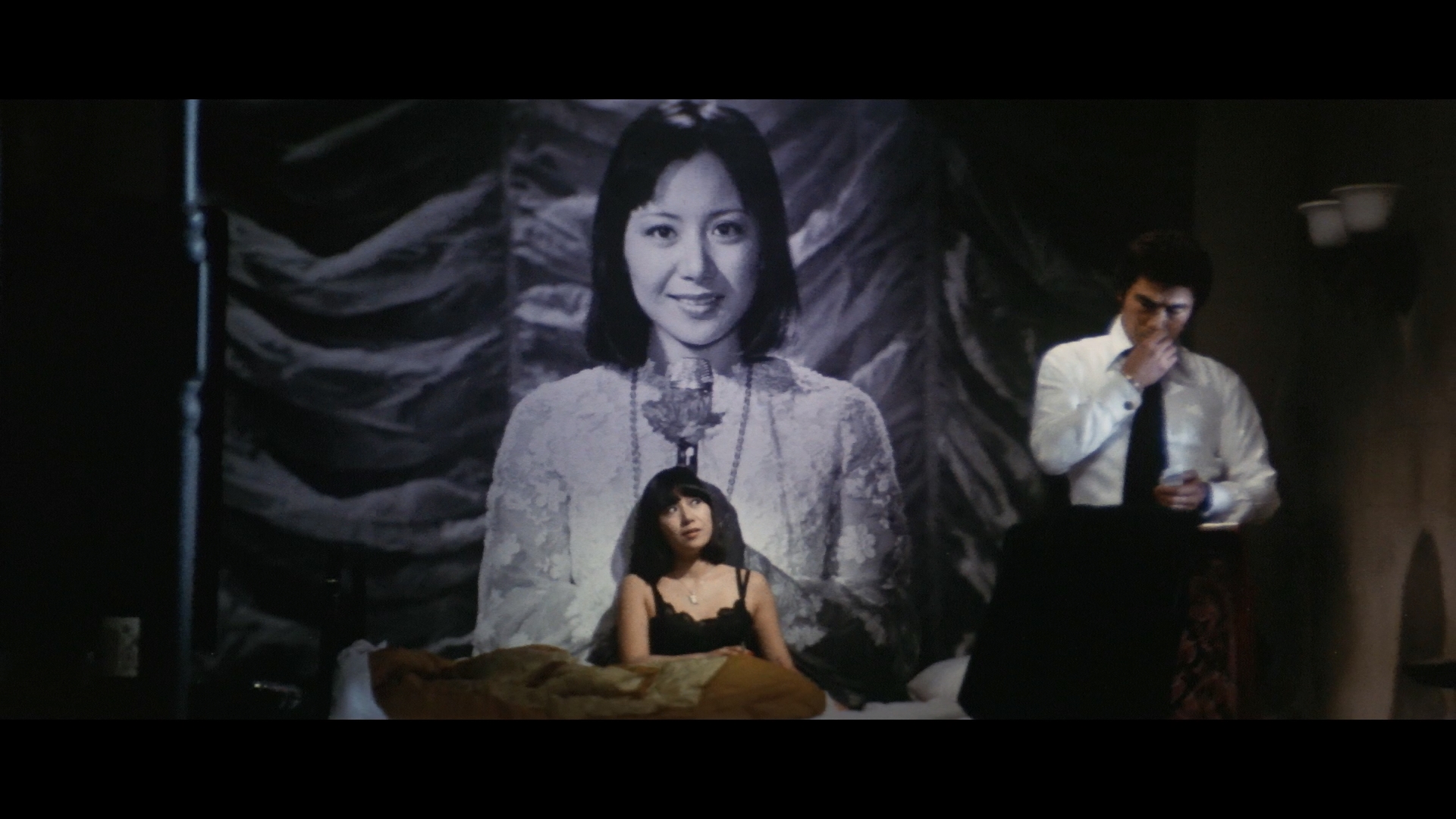 force to persecute them both, with Akira's tortured past as part of the cursed Inugami clan coming into play as his own powers are now a very prized commodity.

Completely nuts and graced with a terrific funk-rock soundtrack that feels like Goblin by way of Pink Floyd (love those guitars!), Wolf Guy (sometimes subtitled Enraged Lycanthrope, even though Chiba isn't technically a werewolf) isn't the most coherent viewing experience you'll have this year, but it might be the most unforgettable. Sporting a tight perm and a perpetual scowl, Chiba is a blast to watch as always whether he's verbally intimidating a board room or kicking the bejeezus out of low-life thugs. It's also completely unpredictable, serving up enough nudity and gore to make genre fans happy while swerving back and forth through genres including a wacky detour into borderline sci-fi in the final stretch complete 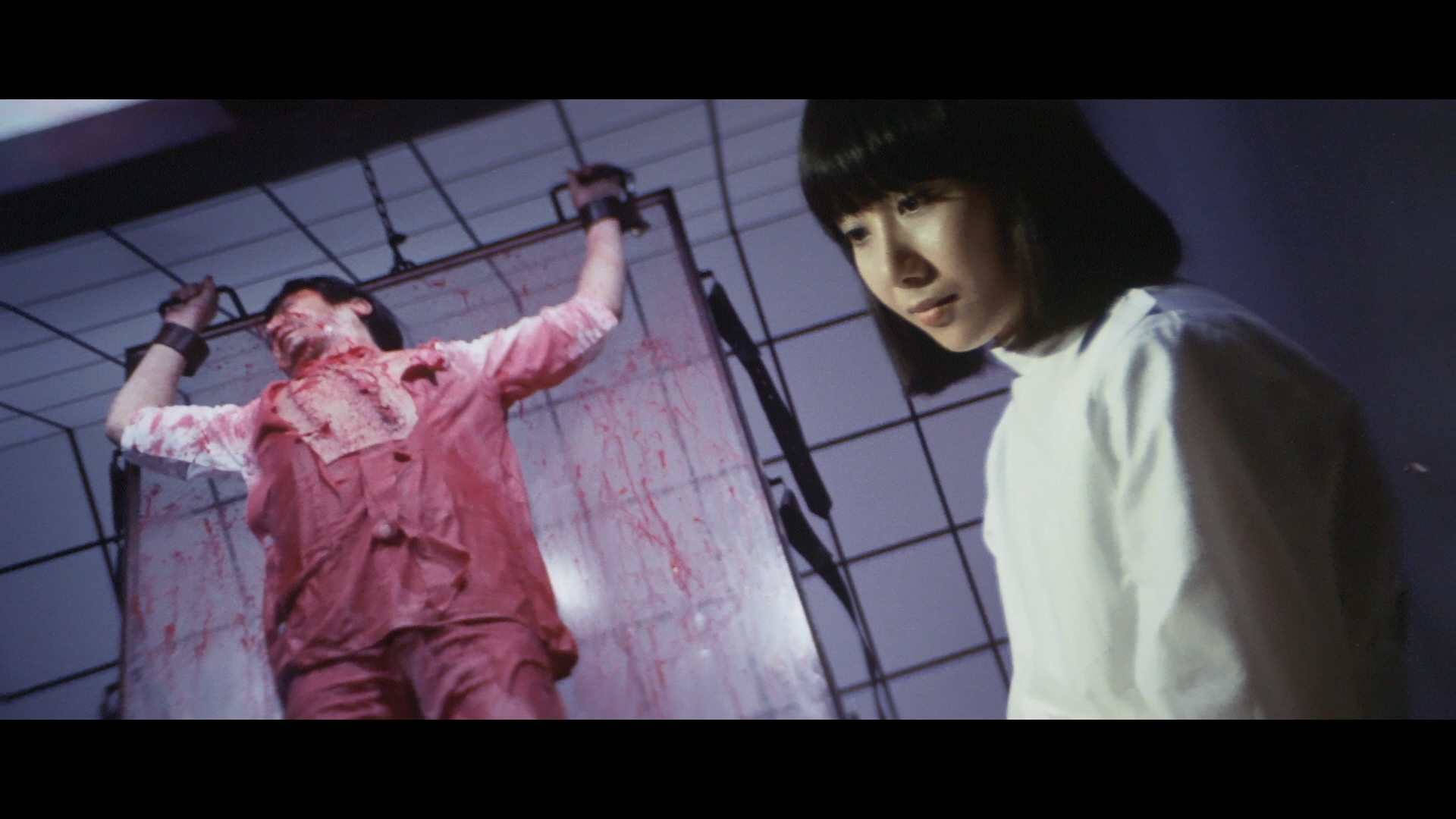 with solarized surgery footage to make it even weirder.

Never released theatrically outside of Japan, Wolf Guy makes its English-friendly debut in both the US and UK from Arrow Video as a dual-format Blu-ray and DVD that thankfully makes those gray market copies out there completely obsolete. Colors and detail look great, though the film often has a hyper-stylized look including very grainy flashbacks and inky dark interior scenes, complete with some rolling crosstalk waves in the darkest moments that might be part of the film printing; it's hard to say given the exaggerated look on display. In any case, it's a frequently eye-popping viewing experience and a great way to be introduced to the film. The Japanese LPCM mono track with English subtitles is satisfying all around. 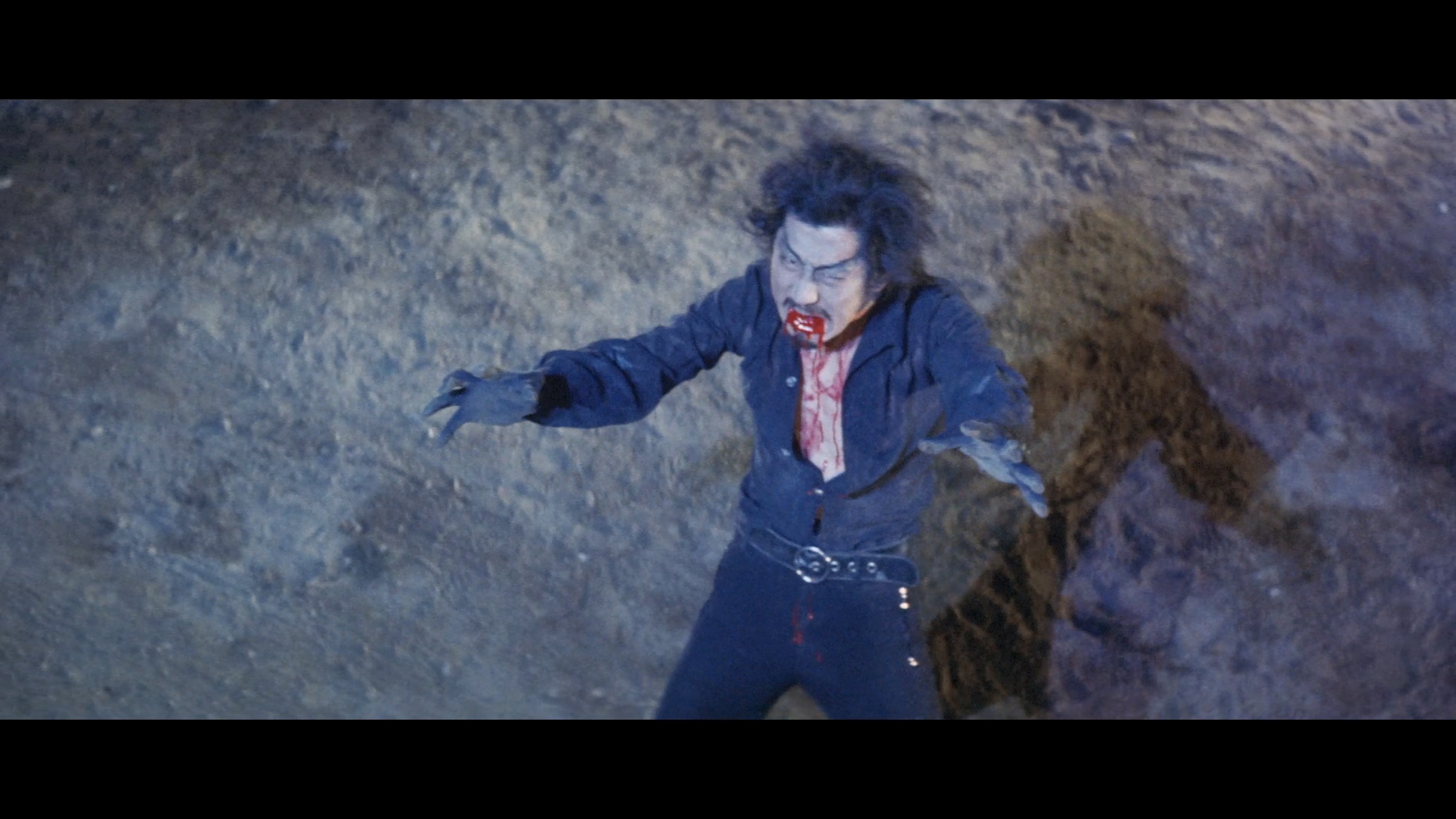 Director Kazuhiko Yamaguchi appears in the first of three new featurettes, "Movies with Guts" (10m31s), and covers some of his career highlights (he made two Sister Street Fighter films, Karate Bear FIghter, Delinquent Girl Boss: Blossoming Night Dreams and Wandering Ginza Butterfly, among many others) while revealing his initial apprehensive reaction to the source material for this film but acquiescing because it was popular (and having no knowledge of werewolf cinema at all). He also reveals "I had a really foul mouth back then" (shocking Chiba on the set) and had to work with very limited 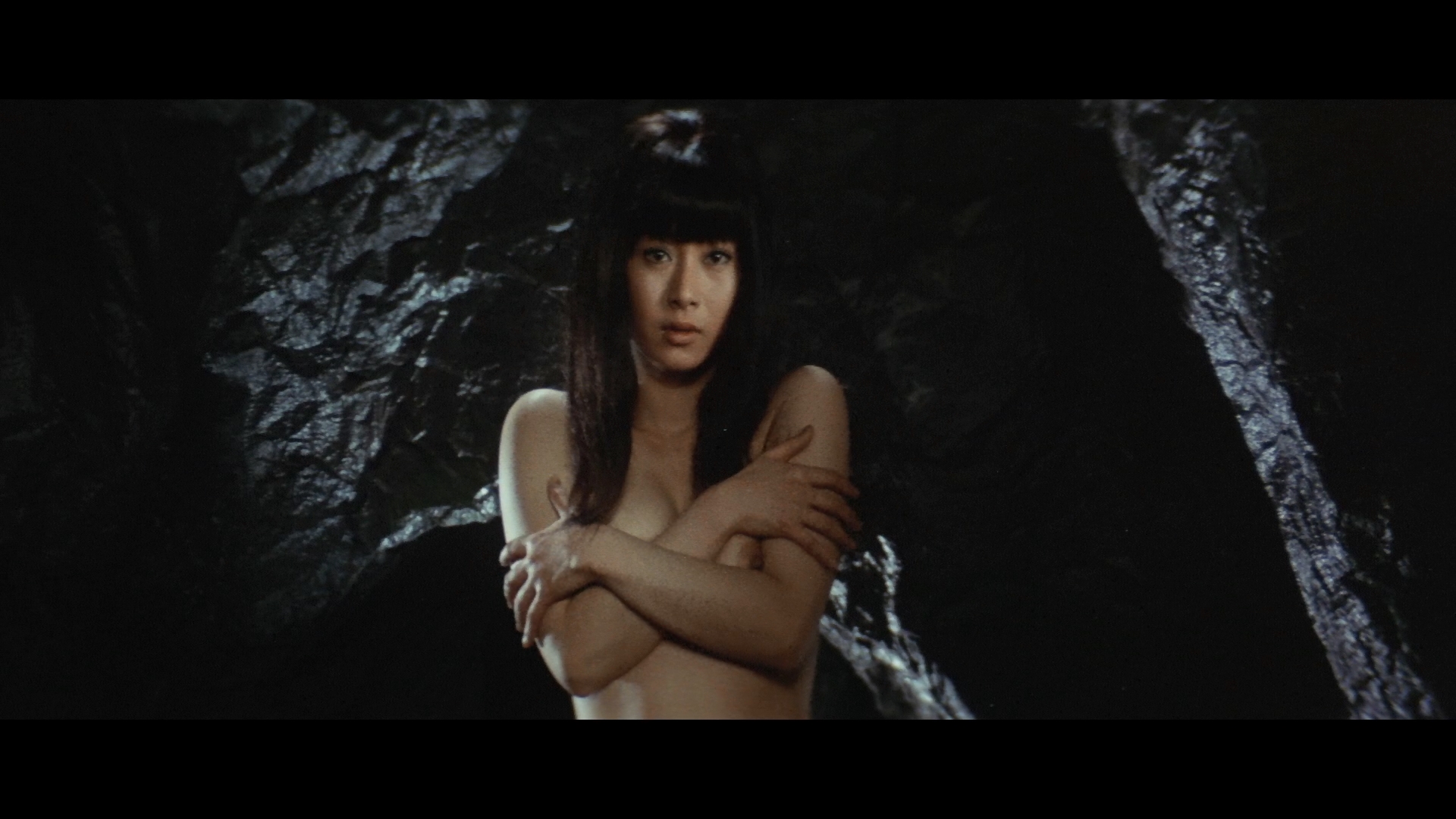 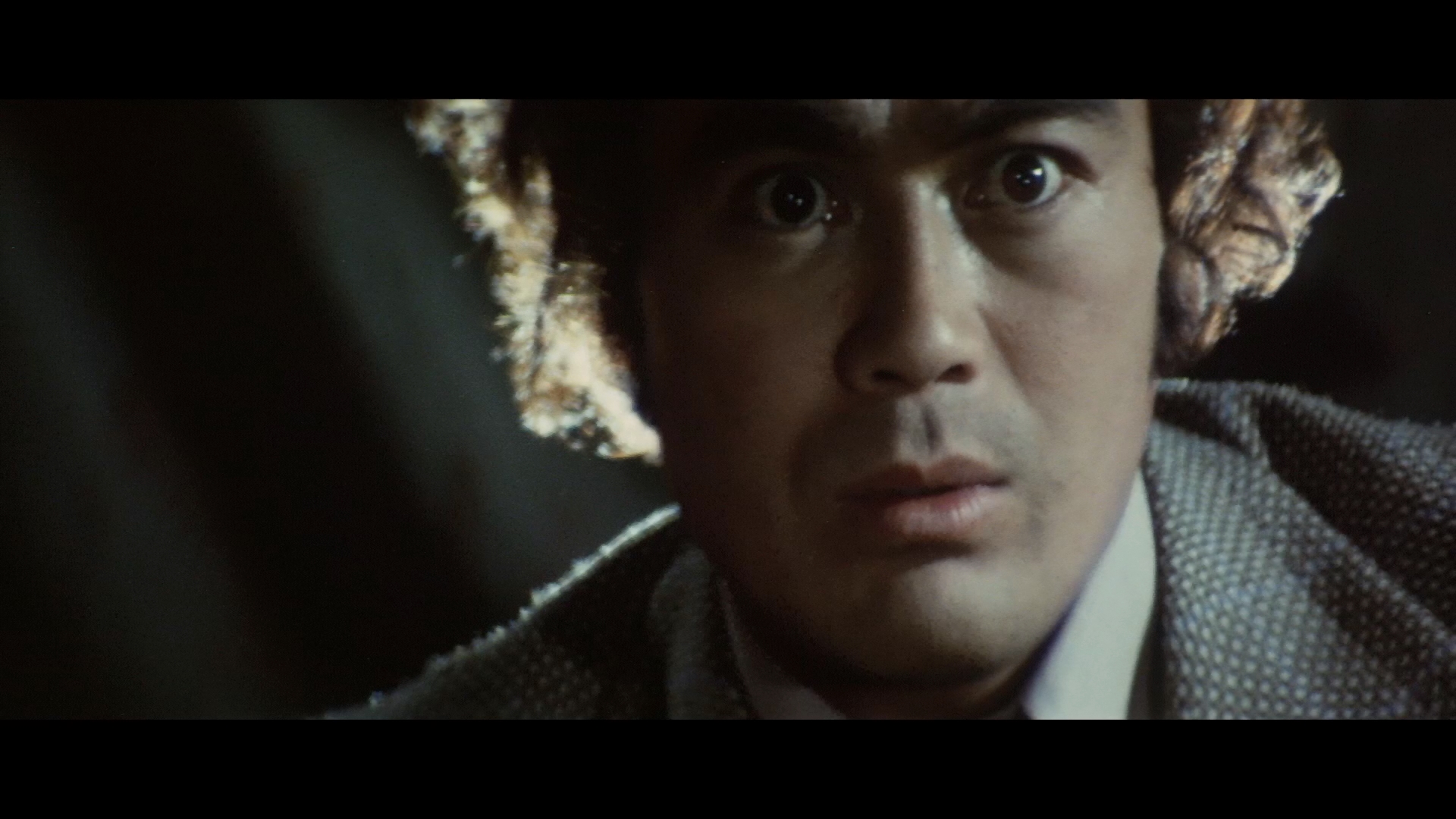 in Action, Part 1" (14m31s), Chiba himself explains how he started off with action films at Toei through Kinji Fukasaku and moving through films like Teruo Ishii's The Executioner and Yamaguchi's Karate Warriors with his unique knack for movement keeping him in demand. He also delves a bit into his own directorial career, including films like Shogun's Samurai and Samurai Reincarnation with stunts by his Japan Action Club. All three pieces are brisk, entertaining, and informative, offering a crash course of sorts in the nuts and bolts of Toei genre filmmaking at the time. The package also comes with the usual reversible art options including the Japanese poster art and a striking new design by Wes Benscoter, plus (in the first pressing only) new liner notes by Patrick Macias and a guide to Japanese monster movie hybrids by Jasper Sharp.