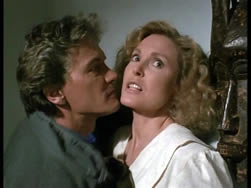 By this point, horror fans have generally given up on the idea of a successful film ever being made from a Dean Koontz novel. Sure, Demon Seed is a fun tripped-out slice of sci-fi kinkiness, and there's definitely some trash value to be found in Watchers or Servants of Twilight (or the best of the bunch, Hideaway), but the odds of one of his novels actually being translated faithfully into a solid, respected genre film seem to be about zero these days. One of the more noble attempts along the way is Whispers, which tackles a perverse and largely internalize 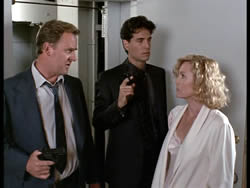 d storyline via a slew of familiar Canadian exploitation names both in front of and behind the camera. (Seriously, compare the credits for this with Happy Birthday to Me and My Bloody Valentine sometime.) It's also a valuable example of how theatrical horror was essentially choking to death in the early '90s, with titles like this often shuffled off straight to video even if they played on a token theater screen or two somewhere in North America.

New York writer Hilary Thomas (Tennant, aka Mrs. Steve Martin at the time) finds her life turning into a nightmare when one of her previous interview subjects, Bruno (LeClerq), turns up one night in her apartment and tries to assault her with a weird satanic dagger. He keeps calling her Catherine and doesn't seem to die, even when shot point blank; even worse, the cops don't initally believe her story. However, one of the officers, Tony (Sarandon), comes around and even starts to get romantic with her, while his partner (MacNeill) is just a chauvanist jackass. When Hilary thinks she's finally disposed of Bruno with his own weapon, the terror seems to be over -- but even death doesn't seem to bring the nightmare to a close, and she must delve into his past to discover what's really going on. 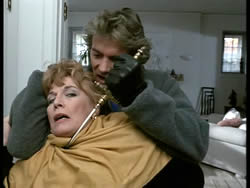 Director Douglas Jackson worked almost entirely in television, and it definitely shows as this feels like a cable production with a few dashes of sadism to keep things interesting. It's also odd seeing Tennant in a victim/heroine role after her villainous turns in Flowers in the Attic, All of Me, and The Handmaid's Tale around the same time, and while you'll never buy her as a New Yorker, she carries the role well enough through its series of twists and turns. As usual, Sarandon rises above his material and makes for a fun leading man, very similar to the role he had in Child's Play just before this. They don't make for much of a romantic couple, however, leaving it to LeClerq to handle the major acting fireworks as the psycho with a bit more going on behind the scenes than meets the eye. Not a bad job at all, especially for a soap actor. All told it's an agreeable time waster, sort of a cinematic equivalent to a throwaway paperback thriller you'd grab at an airport and use to pass a couple of hours. You could say much more than that for the book, but at least it isn't run into the ground like such disasters as Phantoms.

Scorpion's DVD is a perfectly fine full frame transfer presumably taken from whatever master ITV had lying around; it's definitely a few notches better than the VHS release, but don't expect anything like a glossy HD overhaul here. Compositions look TV safe and appear to be more or less open matte; since almost no one's had a chance to see this projected in a theater, it's tough to say how much it was matted or reframed there. Fittingly, this is presented as part of the label's Katarina's Nightmare Theater line, with the hostess doing a commendable job of presenting it as something of a last gasp of the golden Canadian horror era even if we're a long way from the heyday of David Cronenberg by this point. There's no trailer handy for the main feature, but you do get bonus ones for titles like Nothing but the Night, The Survivor, The Incubus, Death Ship, Final Exam, and the closest point of comparison, The Pyx.