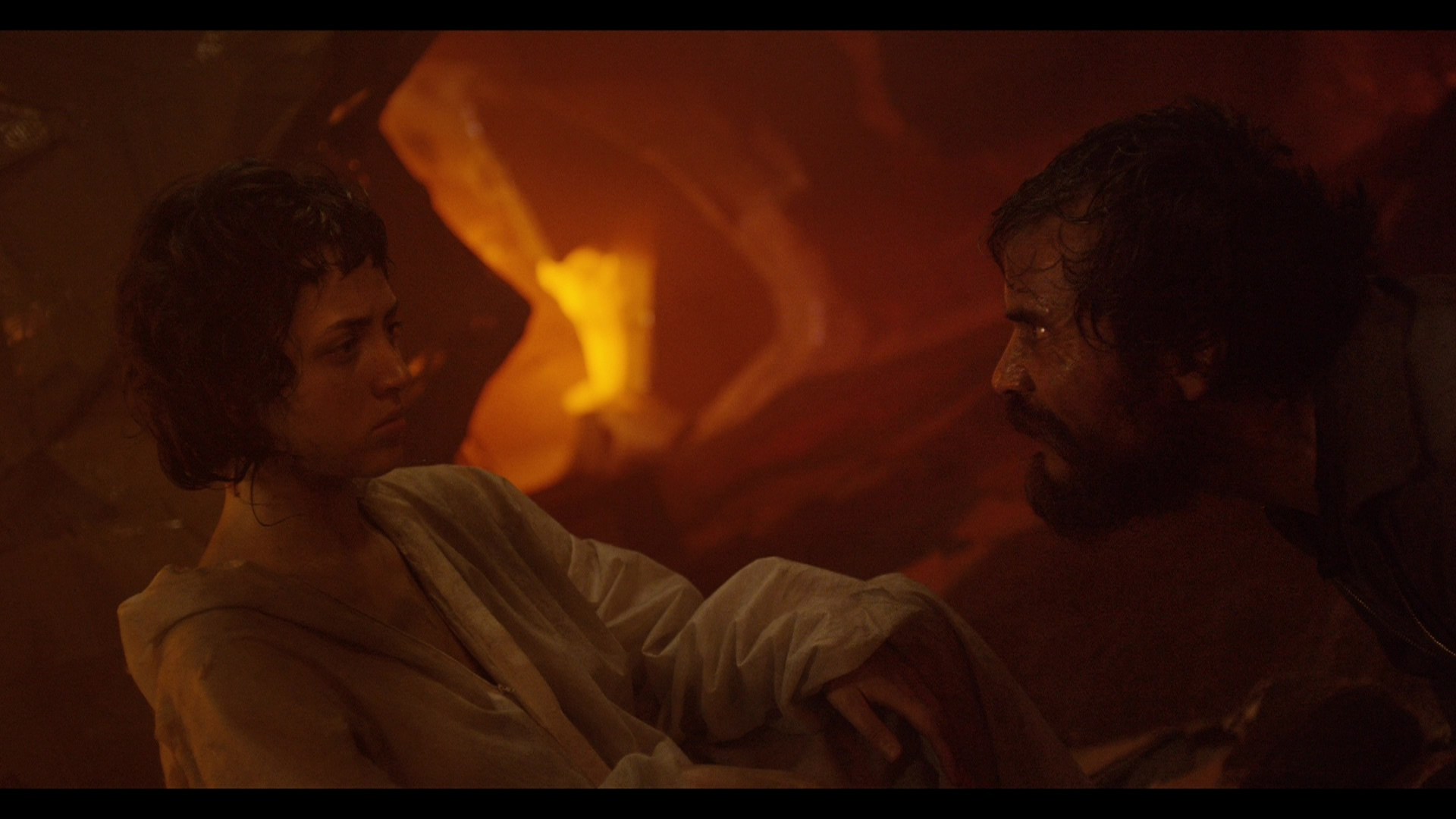 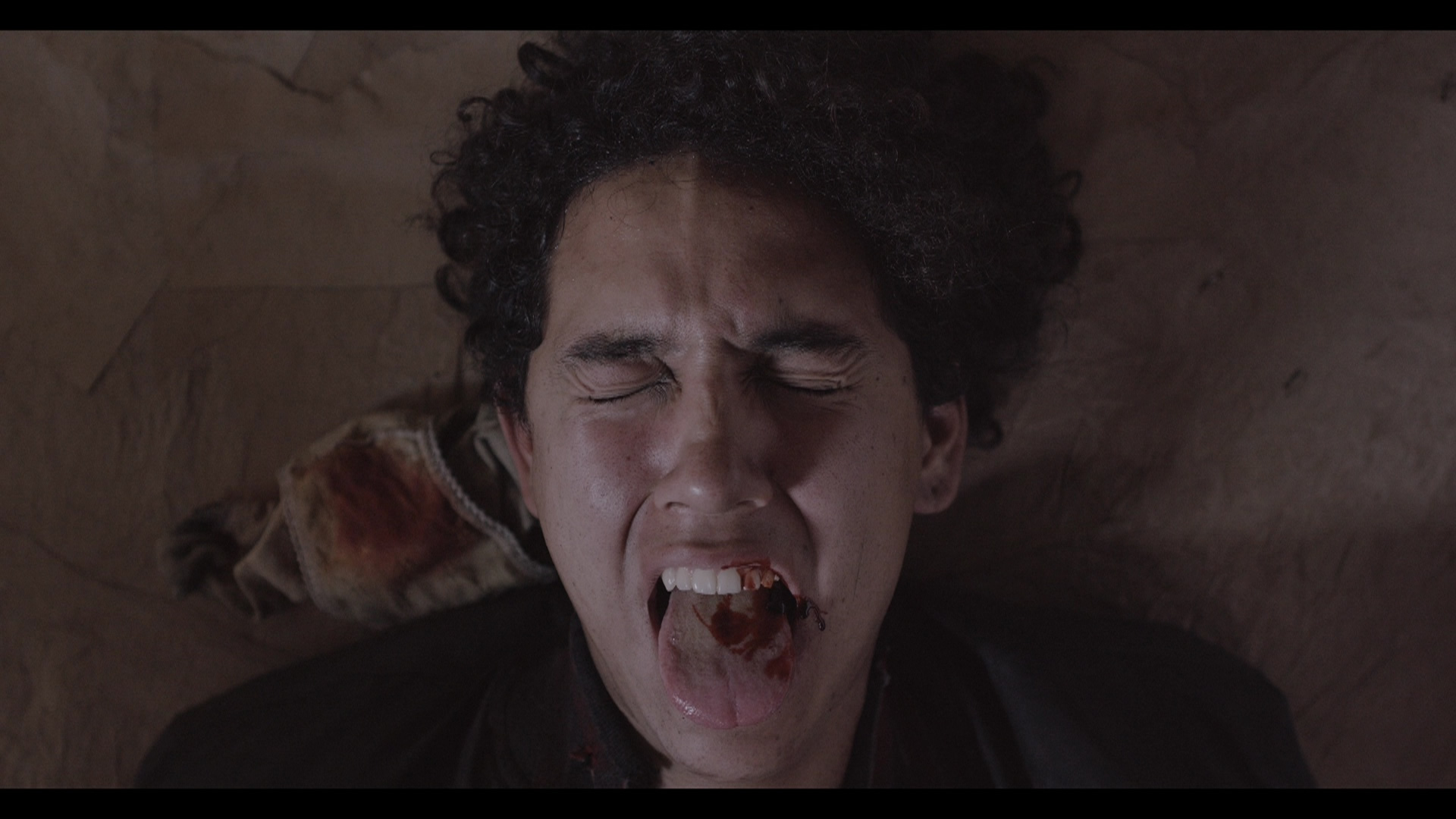 A film designed to appeal to a very, very specific audience, this Mexico City-shot production (co-financed with French backing) is an extreme, deliberately off-putting stew of arthouse psychedelia, explicit but hallucinatory sexuality, and occasionally graphic violence, all served up as a post-apocalyptic allegory that either captivates viewers or sends them screaming for the exits.

In a desolate wasteland of the future, brother and sister Maria (Evoli) and Mariano (Gamaliel) have no home and nowhere to go except further into the ruined city they inhabit. They're soon taken in by a leering, nameless hermit (Hernández) who allows them to stay in his dilapidated warehouse as long as they help him out. That means they get to construct a very strange man-made cavern inside the building and have to perform incestuous acts in front of their host, who soon pushes them beyond the extremes of any kind of morality. And then things get crazy. Really, really crazy.

Clearly inspired by a wide range of head trip films like El Topo, Beyond the Black Rainbow, Innocence, Enter the Void, Holy Motors, Woman in the Dunes, and, uh, Don't Go Near the Park, this is something moviegoers are likely to seek out on their own rather than 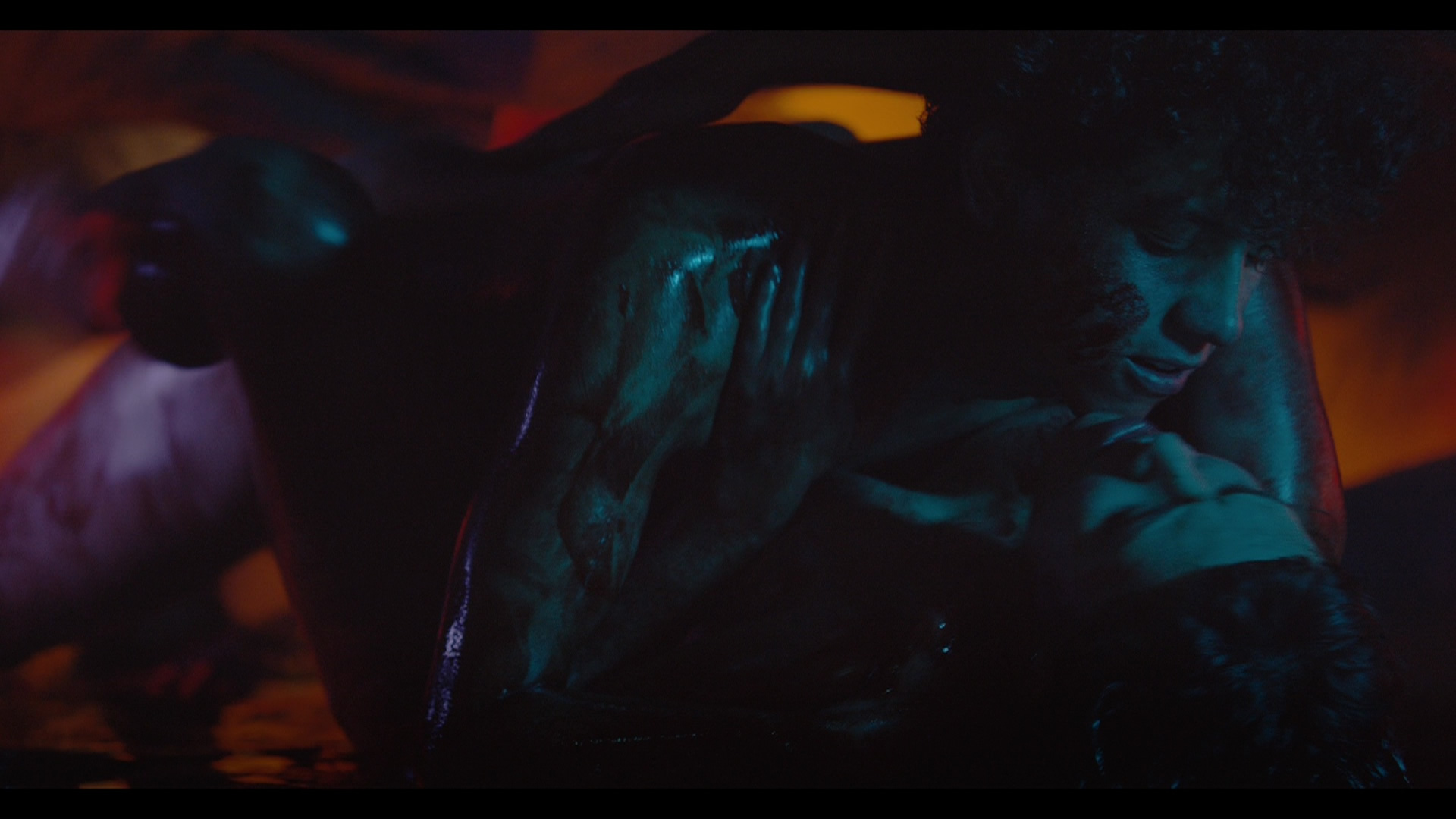 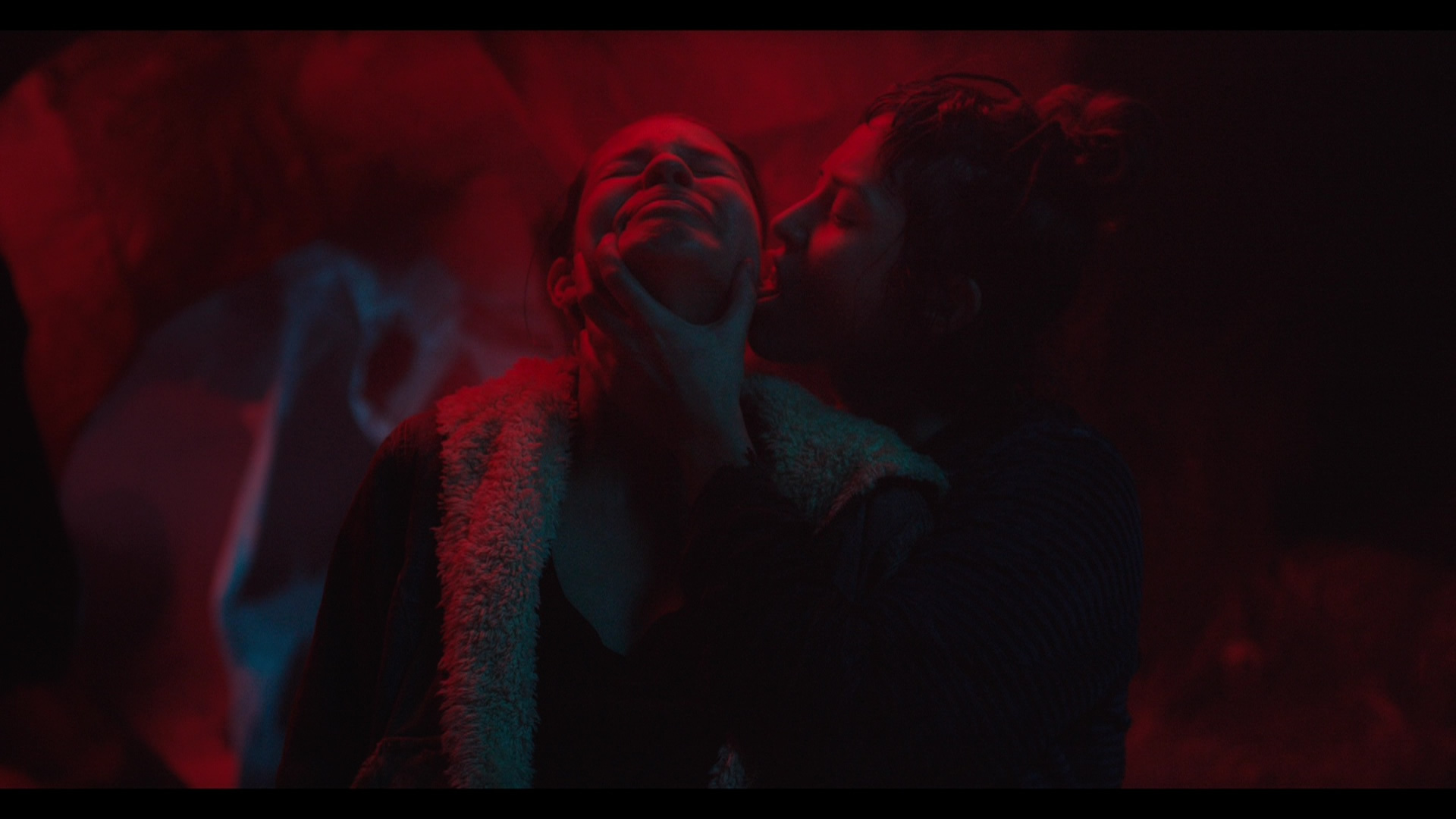 through recommendations from anyone else. Between its slow, hypnotic pacing, refusal to provide easy explanations or linear plotting, and occasional use of casual sex (including a few seconds of unsimulated oral and lingering shots of genitalia in various states of arousal), this is about as niche as they come without veering off into full-on Andy Warhol territory. However, no matter how one feels about the approach, there's no denying it's a visually arresting creation as it gradually morphs from a grim, dark, desaturated appearance into a glowing, Technicolor theater of the grotesque complete with depraved activity and one of the nastier throat slittings you'll ever see. The three main performers definitely deserve props for their fearless performances (which go way over the line of what most actors would be willing to deliver), and the wild sound design (complete with a very effective music score) is an admirable feat in itself as it grows more aggressive and immersive as the film goes through the course of its brief but very dense 79 minutes. You've definitely never seen anything else quite like it.

Arrow Video brings this divisive little number to Blu-ray and DVD in both the US and UK in the same edition, with a blazingly colorful transfer that will make you feel like you're under the influence of controlled substances by the 45-minute mark. Audio options on the Blu-ray include DTS-HD MA 5.1 and 2.0 stereo options, but you'll definitely want to go with the former if you can since it makes for a great demo piece for a home theater setup. Two earlier short films from Emiliano Rocha Minter (who made his feature film debut with this one) are included, Dentro (12 mins.) and Videohome 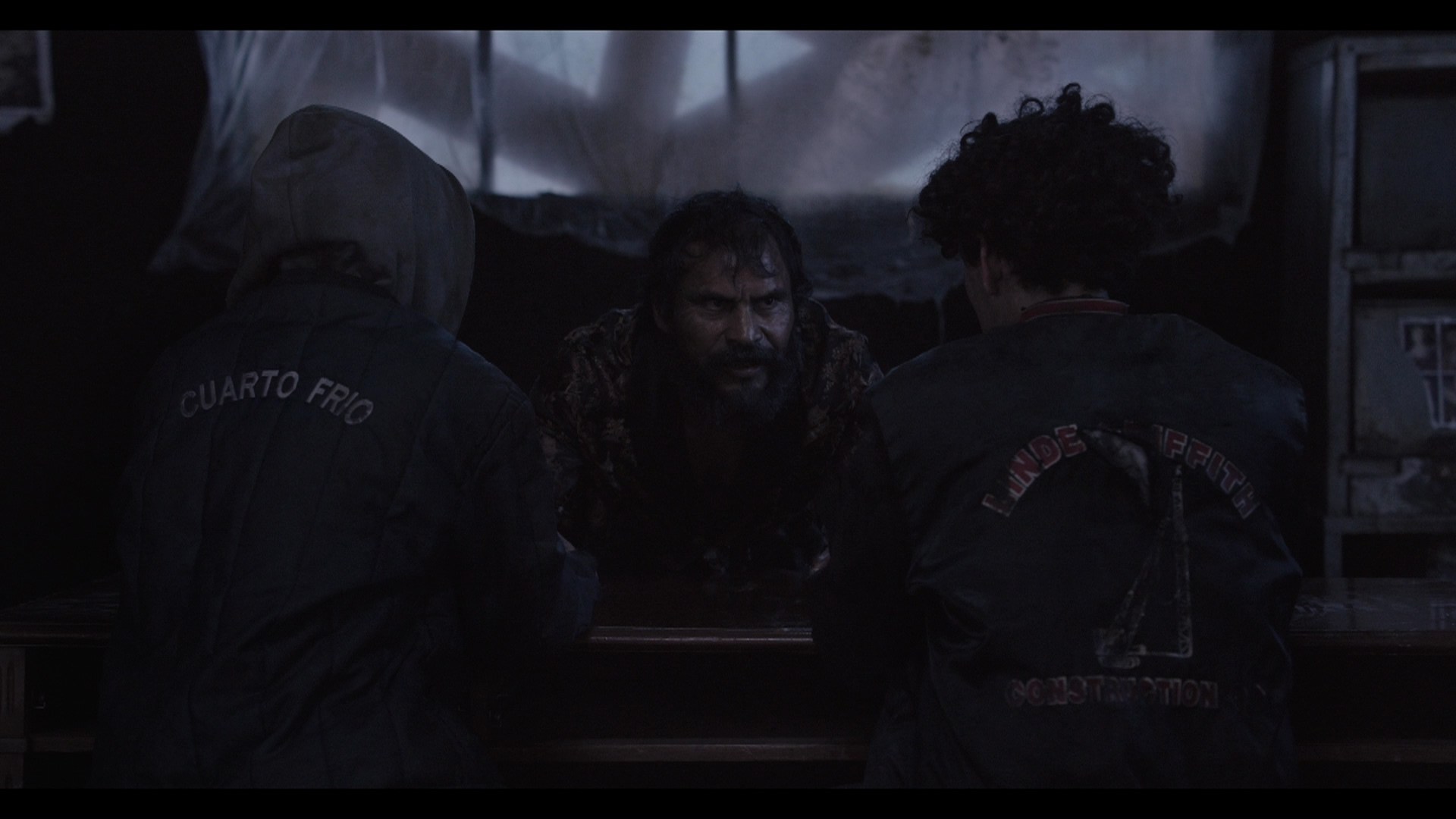 (11 mins.), both of which involve similar imagery of burrowing holes, distorted nature, audacious sound design, and warped personal spaces. However, apart from a wacky bit of foreskin puppetry, both are considerably more genteel than the main feature. 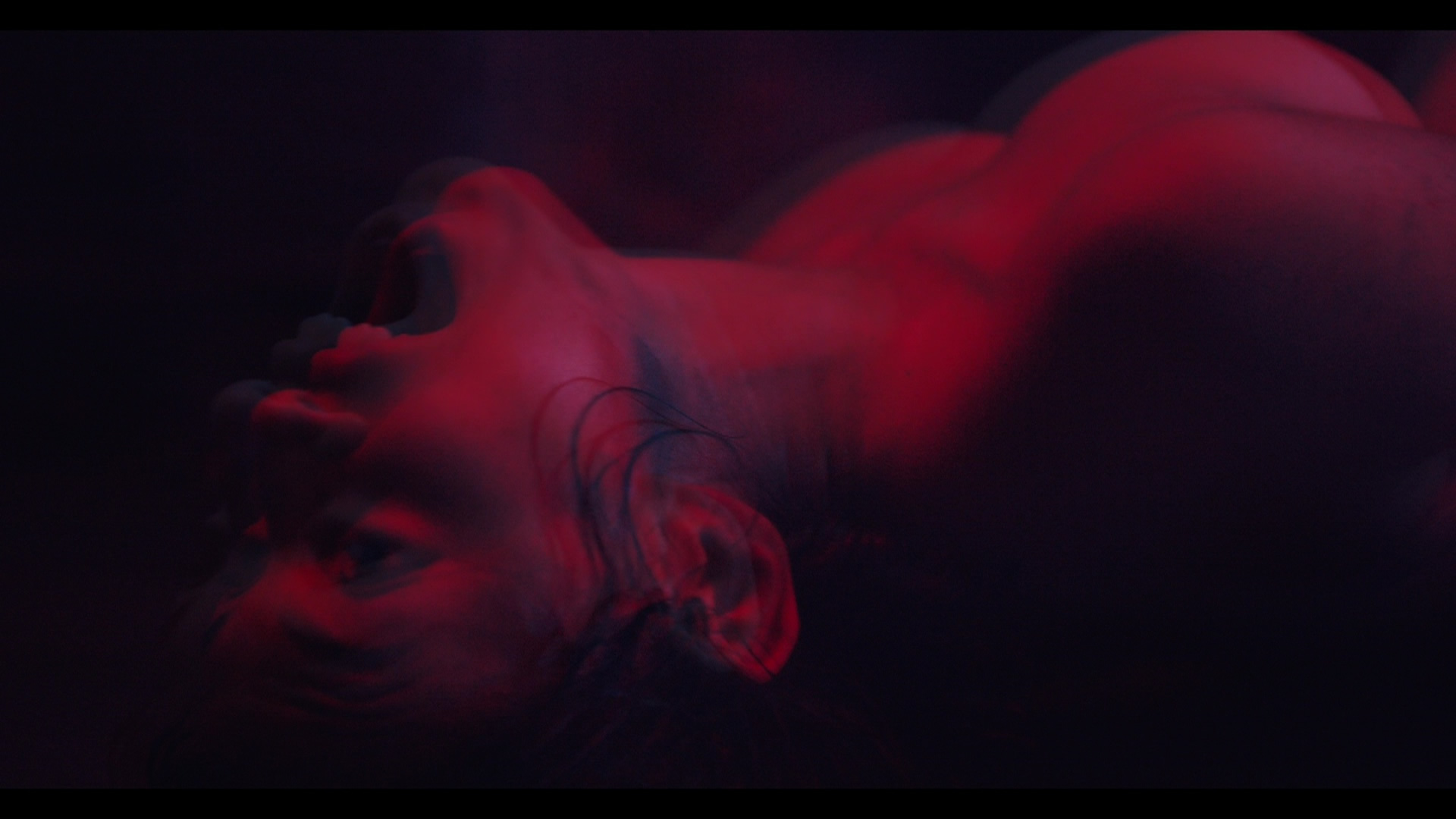 Interviews with the director and all three stars are provided as well (clocking in between 13 and 20 mins. each), some in English and all shot eerily in one take against a blank wall; topics covered include the "potent images" of the screenplay, the casting via Facebook, the audition and rehearsal process, the puny budget (less than $500,000), the "body coach" employed on set, the influence of Bataille and Cantinflas films, and much more. Evoli and Hernández come off as the brighter and more articulate of the performers, and Minter's affection for the "magic" and the organic nature of creating the film is infectious. (He needs to lose those sunglasses though.) Critics Virginie Sélavy provides a very enthusiastic 36-minute appraisal of the film's depictions of dream spaces, self-made family units outside of society, the conventions of magic theater, and the constant reversals of audience assumptions. The very brief U.S. trailer is also included, and the first pressing also features a liner notes booklet with an essay by Anton Bitel.