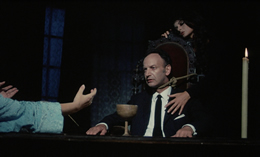 Among the many, many films in the filmography of director Jess Franco, 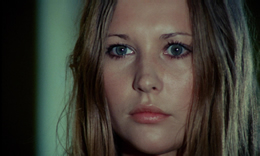 none suffered from the multitude of alternate versions as much as A Virgin Among the Living Dead. Originally conceived in the early '70s under the title La nuit des étoiles filantes (or "The Night of the Shooting Stars"), it was in its initial form a haunting little sliver of gothic poetry, filled with both bizarre flourishes of sex and depravity and an overwhelming atmosphere of melancholy and loss. Unfortunately that wasn't an easy combination to sell, and even after a retitling as Une vierge chez les morts vivants, or A Virgin Among the Living Dead, it was overhauled as a softcore sex title under the title Christina, Princess of Eroticism, with some new unrelated fantasy footage interjected to meet audience demands for erotic films. That didn't work either, and the film languished in oblivion until the end of decade.

Fortunately the resurgence of zombie films in Europe around that time made its second title easier to exploit, so director Jean Rollin was brought in for one day to film several insert shots and completely new scenes with many cast members suddenly turning into the lime-faced undead, not dissimilar in tone to his work on another Eurociné title, Zombie Lake. Inflating the original running time of 79 minutes to 90, this version was the only one viewers could see for many years as it became one of the most prominent of Wizard Video's much-loved big box releases in the '80s. A big twist came later when Redemption issued their own VHS version in the late '90s containing something much closer to Franco's original cut, essentially Christina, Princess of Eroticism without the ridiculous added scenes but with some BBFC-mandated tampering still affecting the final product. Several gray market companies tried compiling their own composite versions stitching footage from the various cuts together, some running absurdly inflated running times, though in this case assembling a "genuine" version of the film in no way makes it the longest. The Redemption cut with censorship edits reinstated then made its American debut in 2003 as part of Image Entertainment's EuroShock line, containing the lackluster English dub and, in a gesture that helped the film considerably, its vastly superior French language track with optional English subtitles.

So, as for the film 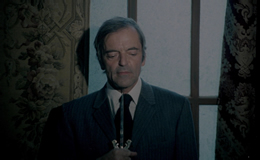 itself... Beautiful young Christina (Bell from Hell's von Blanc) is informed that her father (Muller) has passed away, and his will is about to be read at a remote country castle. Upon her arrival, she hears from the locals that no one lives there but is escorted by a strange valet, Basilio (Franco himself), to the estate. There she finds herself surrounded by a peculiar collection of characters including her uncle (Vernon) and a seductive hedonist named Carmencé (Nichols); even 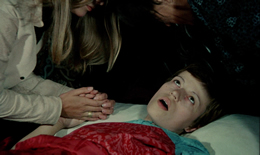 more strangely, she also sees a mysterious Queen of the Night (Libert) wandering the grounds and receives eerie visitations from her father's ghost with a noose around his neck. Nightmares and reality seem to merge as she finds herself unable to navigate any longer between the lands of the living and the dead.

Though the first few minutes don't seem particularly promising thanks to some rough travelogue footage of Portugal and a deliberately low-key tone, A Virgin Among the Living Dead is, in the Franco version, one of the director's finest achievements and a strong rebuttal to those who attack his body of work as incompetent. The final twenty minutes in particular are astonishing, an escalating parade of ghostly, artistic set pieces coupled with one of the most effective scores ever written by composer Bruno Nicolai. The appearances by Eugenie De Sade's Muller, playing another of his dark father figures but in a different key here, are particular master strokes and rank among the pantheon of the finest moments in European fantastic cinema, such as his indelible floating journey through a brightly lit forest.

Anyone familiar with this film shouldn't be surprised that the 2013 Blu-ray and DVD releases from Redemption and Kino Lorber are obviously compromised by the source material, which has seemingly been loaded with white specks and scuffs since its creation. That seems to be the state of affairs for almost all Eurociné films, but that said, the transfer from the negative looks excellent and, in terms of both detail and color fidelity, the Blu-ray handily beats its SD 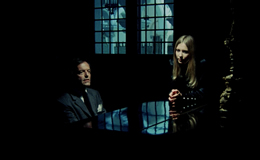 predecessors hands down. The darker scenes in particular play better, with the eerie blasts of gauzy afternoon light now playing delicately against the background instead of turning to mush as seen on the DVD. Both the English and French audio tracks are included (LPCM mono) with optional English subtitles (translating the French dialogue, not dubtitles).

While the Image DVD relegated all of the alternate Rollin zombie footage to a separate 15-minute reel as an extra, the Redemption release includes the full versions of both the Franco cut (under the title Christina, Princess of Eroticism, which is close enough) and the bastardized version as A Virgin among the Living Dead, both with their French-language credits. Though it runs 11 minutes longer, the Virgin version actually contains a multitude of alternate shots sprinkled throughout and an additional (incoherent) sexual assault against our heroine thrown in with doubles for the actors standing in unconvincingly. 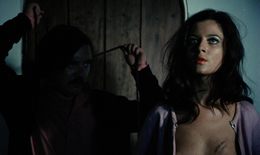 Far more respectable is the audio commentary provided for the Christina cut by Video Watchdog's Tim Lucas, who skillfully charts the murky waters of the film's many versions and points out some of its surrealistic influences and logic (including a great explanation for that otherwise inscrutable bit in which Franco terrorizes von Blanc with a dead chicken). He opens on a 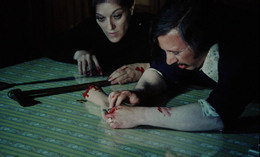 provocative note by analyzing the film as a sort of artistic grief therapy for Franco after the sudden death of his muse, actress Soledad Miranda, and throughout he offers a solid reading of it as a psychological study of the effects of depression as well as a narrative theory that in effect makes it a precursor to I Am the Cheese (or, by extension, Shutter Island).

As for video extras, you also get an 11-minute Franco interview, "Mysterious Dreams," conducted by Severin Films. Here the director (in thick English with subtitles) discusses his distaste for the film's most famous title and his frustration with its alternations over the years while praising the original version as a work of which he can be proud. He also covers his collaborations with Nicolai ("quite mad") and shooting in Portugal for the first time, discovering a location that would fuel several later films. Daniel Gouyette's "The Three Faces of Christina" takes a deeper look at the three main versions of the film, spending 12 minutes with participants like Eurociné's Daniel Lesoeur and film historians Alain Petit, Lucas Balbo, and Jean-Pierre Bouyxou offering their own angles on its twisted history including a nifty reveal about the likely creator of that extra Christina footage. Also included are Gouyette's 8-minute "Jess! What Are You Doing Now?" featurette (also seen on The Awful Dr. Orlof), a gallery of 16 posters and stills, and trailers for this film along with Orlof, Female Vampire, Exorcism, and Oasis of the Zombies. A wonderful film in the lavish edition it fully deserves, this will hopefully continue to receive a warmer reception among all fans of great European horror cinema.