Best known as the naive newlywed turned lesbian bloodsucker Valerie in Daughters of Darkness, French-Canadian actress Danielle Ouimet vanished from the international scene but left her own 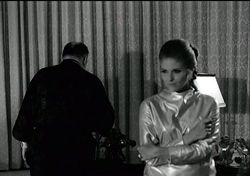 indelible mark in at least one true genre classic. However, her acting career actually stretched back a little earlier to 1969, when she caused a stir in the Quebec cinema community as another Valerie, this time a liberated woman born from the sexual revolution. The following year she reteamed with director/producer Denis Héroux for L'Initiation, another mixture of softcore sex and social commentary also known as Here and Now (which happens to be the refrain of the catchy pop song over the opening credits). Fans of her vampire role will be surprised to see how relaxed and uninhibited she is in this pair of counterculture oddities, which play sort of like what Radley Metzger might have been like had he been French-Canadian and more in tune to the youth crowd of the time.

Undeniably a product of its time, Valerie follows the sexual misadventures of a young Catholic schoolgirl (Ouimet of course), first seen romping naked in front of a mirror, who decides to take off and 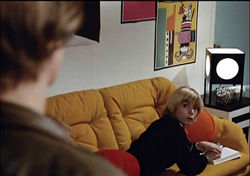 experience real life in Quebec. After establishing a less than noble living as an exotic dancer and a woman for hire, she finally meets the man of her dreams but finds her chances for happiness thwarted by her seedy career choices. Though entertaining and crammed with stylish black and white photography, the film is hampered somewhat by the reactionary underlying nature of its message that "loose" women are inferior or face difficult lives easily avoided by a good Catholic upbringing. Ouimet makes for a beguiling, erotically charged presence in the film, however, and she carried this persona over into her next film. L'Initiation concerns the sexual and intellectual awakening of Victoria (Chantal Renaud), a freckled good girl who enjoys an occasional skinnydip but can't hold a candle to her best friend, Nadine (Ouimet), who enjoys rolling around naked on her inflatable swimming pool folding chair just to infuriate her mother. While Nadine goes through a string of men, the more cautious Victoria finally lands in the arms of Gervais (Jacques Riberolles), a middle aged French author visiting Canada who's teaching a literary course. Victoria's counterculture awakening broadens her horizons, allowing her to see how mind and body can be combined for a fuller daily existence. Incidentally, this scenario carried over into real life when Renaud and Riberolles began an affair during filming and took off to France together. Sort of like a hipper, faster, and more colorful 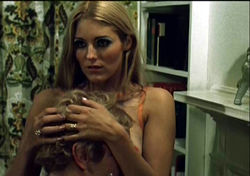 version of I Am Curious (Yellow), the film isn't really all that profound, but the performances are sincere, some moments generate authentic poignance, and the vivid decors, pop music, and clothing make for a fetching time capsule.

Lions Gate has released both films as a two-sided, double feature DVD geared for the French-speaking Canadian market. Both films are presented in their original French language or dubbed in English; no subtitle options are available, but the dub is reasonably well done with suitably chosen voices. The English menu must be chosen to view the film in English; audio options cannot be switched on the fly while viewing the films. Valerie looks absolutely pristine in its open matte transfer and is one of the most beautiful black and white transfers to come down the road in quite a while. The subtly nuanced lighting comes through with razor sharp clarity, and there are no digital flaws to be spotted at all. L'Initiation is mildly cropped from its original aspect ratio, approximately 1.78:1 judging from the slightly squeezed opening credit sequence (which look great in 16:9 playback). Colors are strong and the print is in excellent shape, though it doesn't look quite as dazzling as its companion feature. The disc also includes extensive filmographies and bios for nearly every actor in each film; in fact, the bios are quite illuminating and loaded with facts relating directly to the production of the films. Also included is a nice new French language featurette in which Ouimet (now a TV hostess), Héroux, and other principals discuss the films and place them in their historical context. No subtitle options are offered, but those with a rudimentary knowledge of French should be able to get the idea. It's especially fascinating to see what Ouimet looks like now, and she comes off here as an elegant, charming, and high-spirited woman. Fans of hip '60s erotic cinema or Canadian films in general should find this one well worth picking up, and one can only wish Lions Gate's U.S. releases were all this interesting.