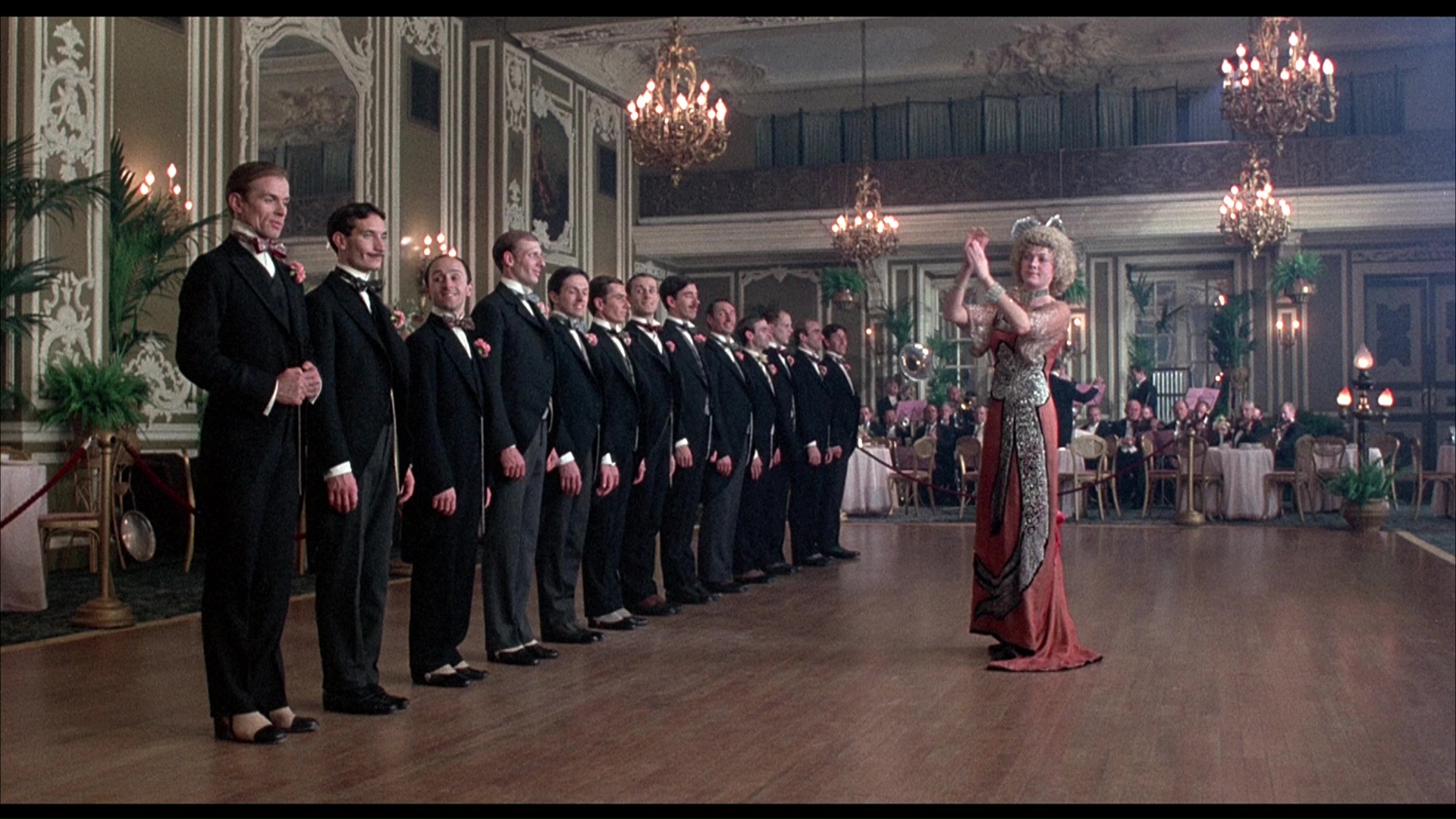 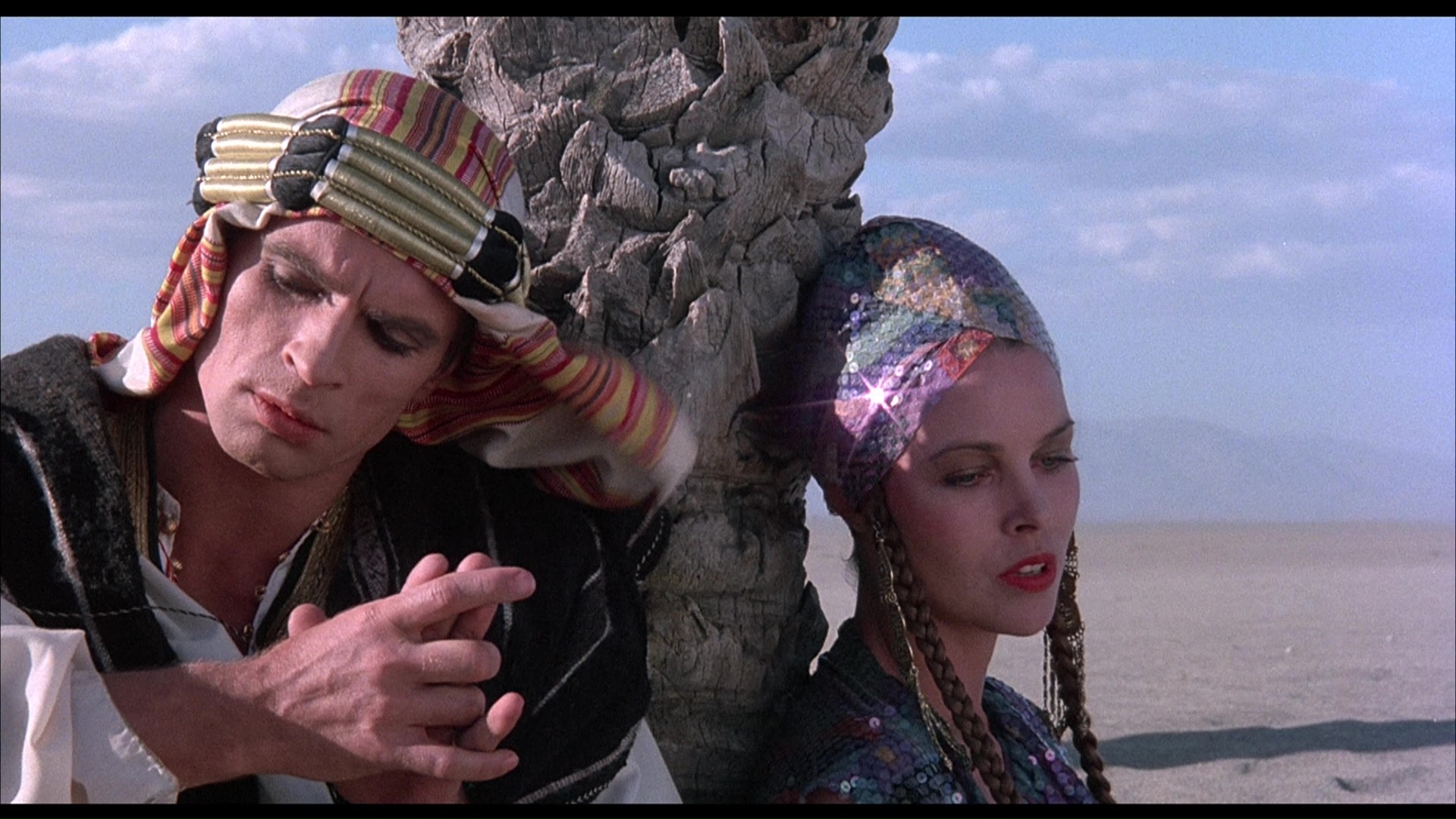 It's ironic that director Ken Russell's biggest financial disaster (at least in the U.S.) is now one of his most widely available titles on Blu-ray, getting three respectable editions way before most of his more famous and respected films merit the leap to HD in any country at all. Fortunately that development has also allowed a reappraisal of this visually lavish, ambitious, and fascinating study of the silent era, a Hollywood biopic different from the other artistic fields he had explored before it. The main hook here is the casting of famed Soviet dancer Rudolf Nureyev, a celebrity and pop culture fixture whose magnetic personality was deemed the closest equivalent to the silent film star Rudolph Valentino.

Russell's film opens with the famous funeral for Valentino, who died at the age of 31 and whose demise caused hysteria and self-destructive behavior among his female fans. The crashing of the funeral parlor is followed by the arrival of several significant women in his life whose stories relate his progression from dance hall gigolo to celebrated movie star in films like The Four Horsemen of the Apocalypse and The Sheik. Among the narrating mourners are dramatic movie star Alla Nazimova (Caron), his former wife Natacha (Phillips), and studio executive June Mathis (Kendal), who relate the ups and downs of life including a humiliating night in a New York drunk tank due to a bigamy charge, his disastrous business decisions with Natacha that nearly led to his ruin, and his defensive attitude to his masculinity that ultimately resulted in his demise.

Despite scoring a major hit with Tommy in 1975, Russell was already on shaky ground and had firmly cemented his reputation as Britain's bad boy of directing thanks to its immediate successor, the orgiastic composer biopic Lisztomania. This would turn out to be his final theatrical film of the 1970s, leaving him with only a pair of (very good) poet 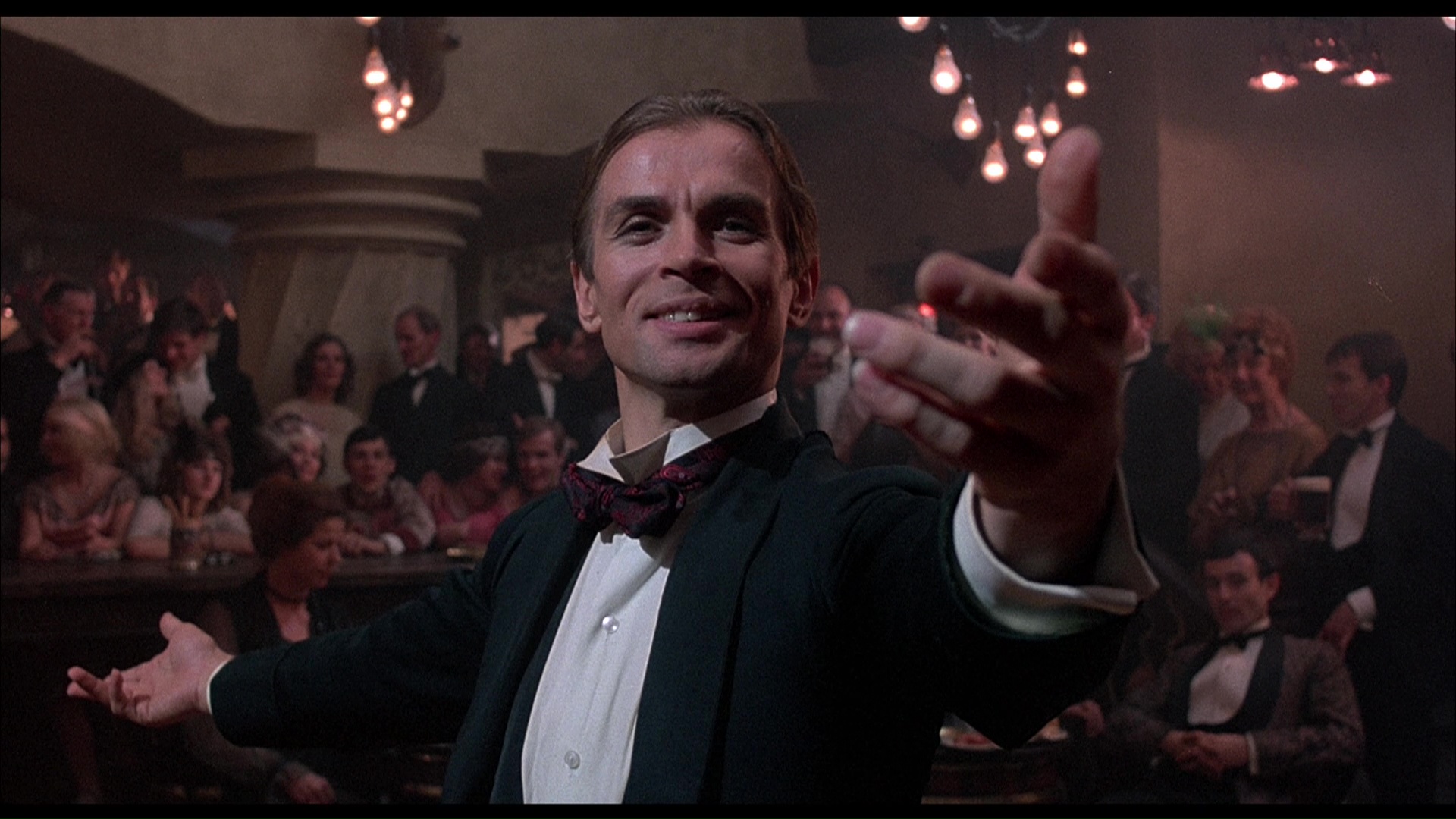 biographies for British TV, and the last film made with his wife, costume designer Shirley Russell, whom he divorced in 1978. Russell's costumes are a major asset here, giving the film a glittering and very striking look with the actresses in particular 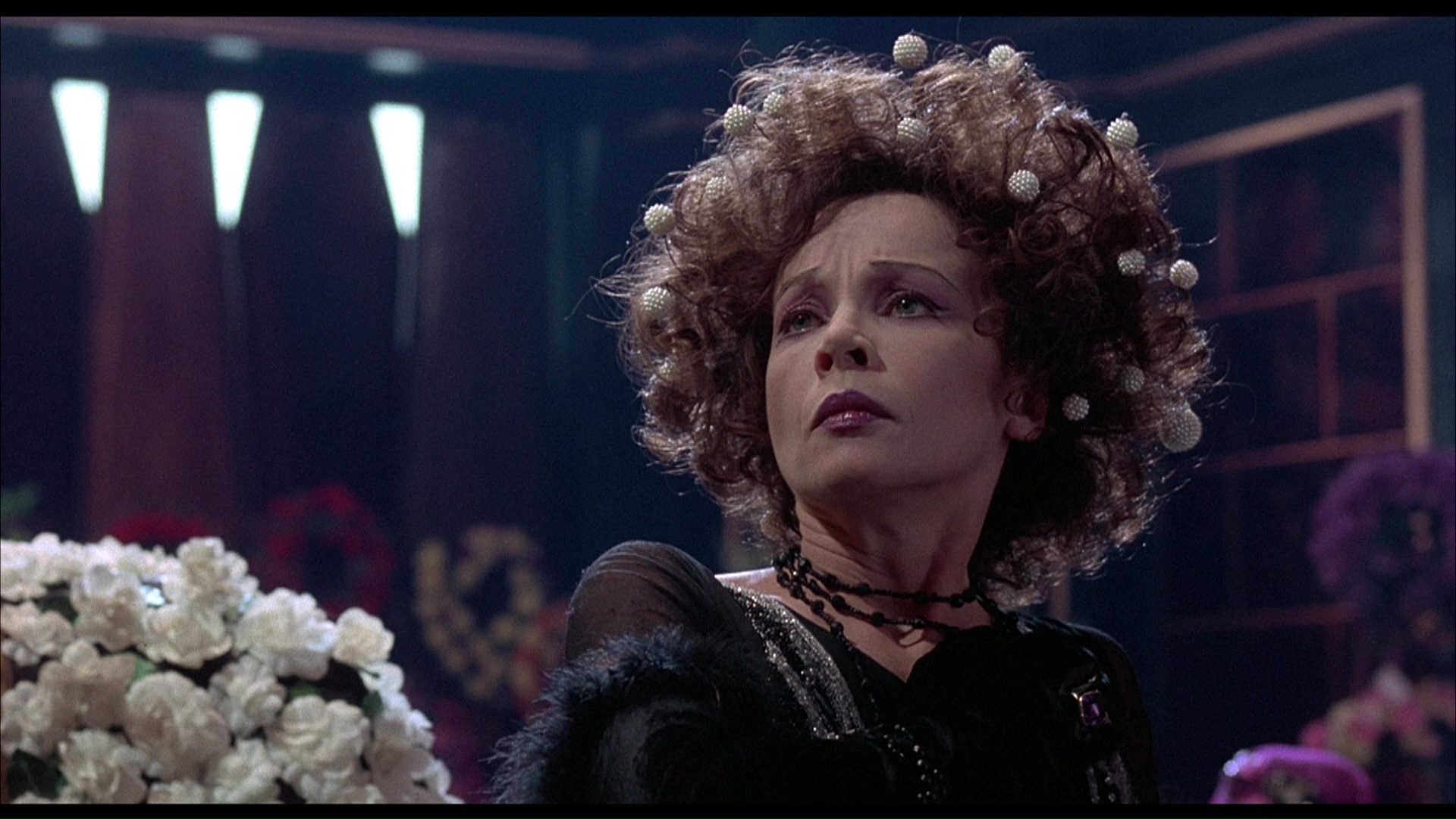 benefiting from some stunning outfits that evoke the silent era while fitting in perfectly with Russell's flamboyant aesthetic. By the time Russell returned to the screen in 1980 with Altered States, it was clear his career was going to move in a very different direction... and indeed it did.

Though his aggressive, heavily accented performance can be an acquired taste on first viewing, Nureyev is actually quite good for the most part in the title role, offering a graceful physicality that meshes well with Russell's style. All of the leading ladies get to sink their teeth into juicy material, too, with Caron in particular having fun with her big scene in front of the press before launching into her story. A very young Carol Kane is mostly window dressing as the primary influence for Valentino's segue into acting (she also acted in the Valentino spoof The World's Greatest Lover the same year), but her unique look and high-pitched voice make her a perfect fit for the 1920s setting. Regular Cassevetes actor Seymour Cassel and former Avengers star Linda Thorson fare well enough, too, and even Russell himself pops up in a small role as - what else? - a film director. The one sour note is Phillips, the sole surviving member of legendary pop group The Mamas and the Papas, who still comes off like a '70s Californian no matter how much '20s window dressing Shirley Russell throws on her. Never the warmest actress in the world, she's beautiful and certainly convincing as a manipulator but never seems to click with the rest of the film. The hatred she and Nureyev felt for each other during the shoot was legendary, and that tension sadly doesn't lend much spark to their scenes together.

After its theatrical release from United Artists, this film was largely kept from view for years when it passed over into the hands of MGM. It did pop up occasionally at odd hours on TV in a brutally butchered print missing over half an hour of footage, including almost all of Caron's role and the whole nude sheik love scene. Eventually 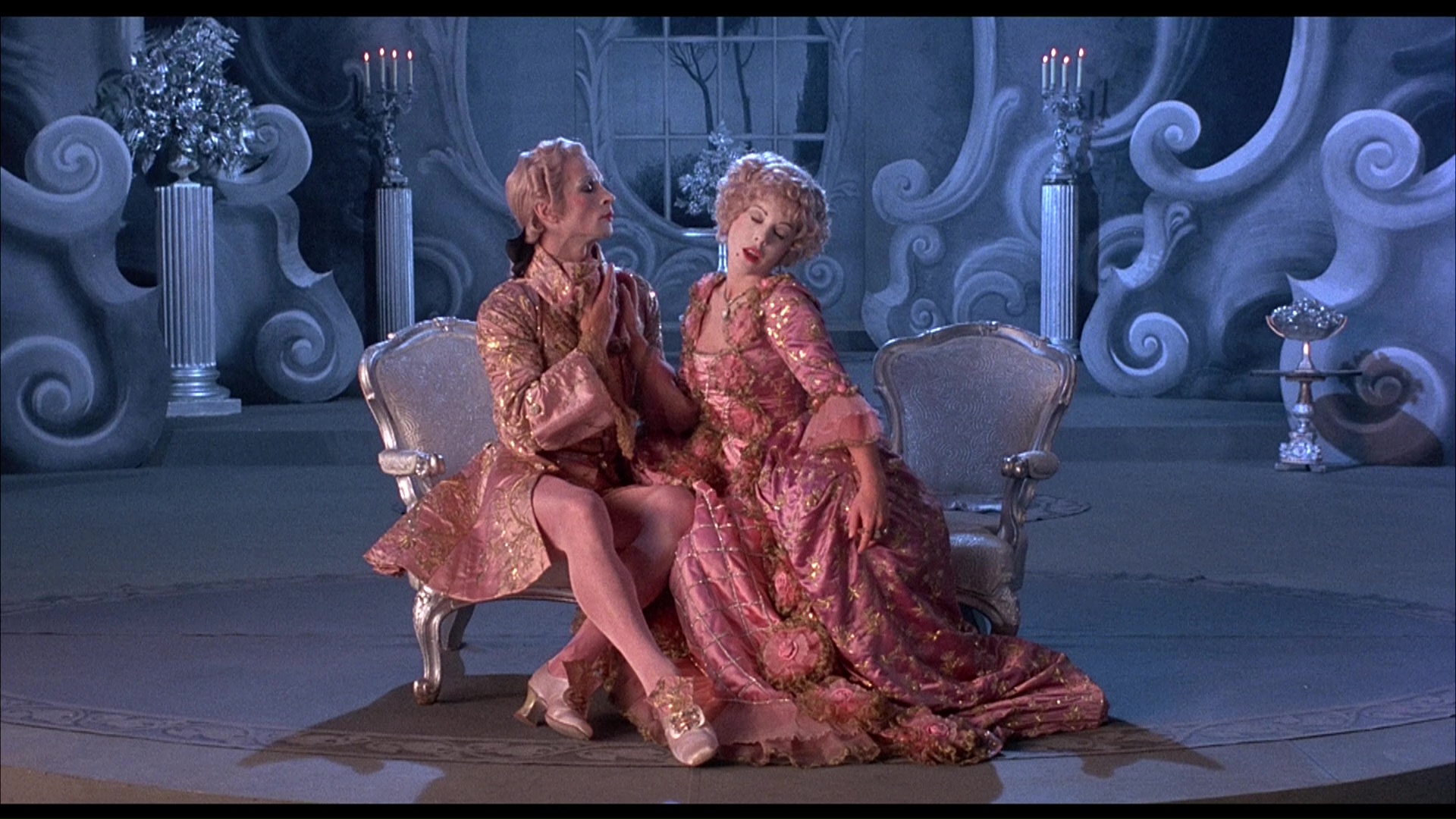 MGM issued the film as a VHS release exclusively through Amazon in 1994, featuring an open matte transfer (compared to the 1.85:1 framing for which it was intended in theaters). This boxier look with more headroom is actually a fascinating alternate presentation 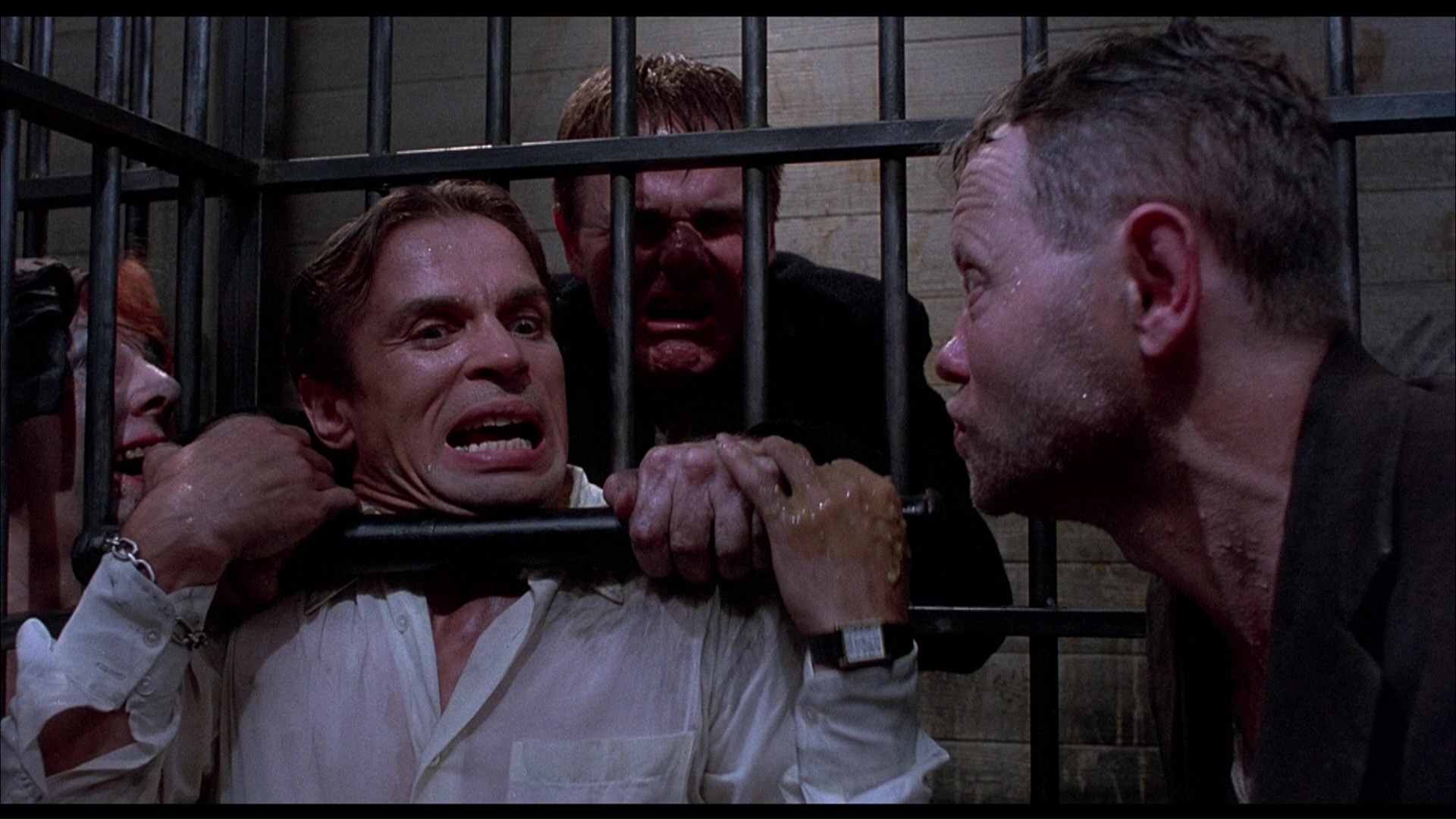 as it more closely approximates the look of a silent film and also reveals a surprising amount of lingering, unabashed frontal nudity of both Nureyev and Phillips that's limited to more discreet glimpses in the matted theatrical version. That same unmatted version later turned up on UK DVD in 2002 from ILC Prime, and a 16x9 version replaced it in 2008 from Optimum. None of the transfers were particular knockouts, with the widescreen one getting recycled from MGM as an MOD DVD-R in America. Finally the Rudolph Nureyev Foundation embarked on a restoration of the film in collaboration with MGM, resulting in a greatly improved HD transfer that bowed on French Blu-ray (minus extras with in English with removable subs) in early 2015.

That same excellent source forms the basis for the nearly simultaneous Blu-rays released in the U.K. and the U.S. from the BFI and Kino Lorber respectively. Both feature a higher bit rate than the French disc, which results in an appearance that's similar but a notch deeper and crisper during motion scenes (which are considerable given Russell's fondness for bouncing camera work). Video Watchdog's Tim Lucas recorded an audio commentary for the Kino Lorber release that was licensed out to the BFI, so either way you'll get it. Even if you know nothing about silent cinema or Russell, it's an informative and often surprising tour through the film as he points out the notable structural and symbolic similarities to Citizen Kane (a film Russell adored) and provides a great deal of historical context for the people represented in the film (some slightly fictionalized). He doesn't shy away from the more unpleasant aspects of the production (including the feud between the two leads), even mustering up something of a defense for one of the film's most grotesque and abrasive scenes (apart from that infamous Devils-style jail scene) in which William Hootkins devours the scenery whole as a nightmarish vision of "Mr. Fatty" (Arbuckle). What emerges is a clear portrait of how Russell wound up closing out his greatest and most audacious decade as a filmmaker. 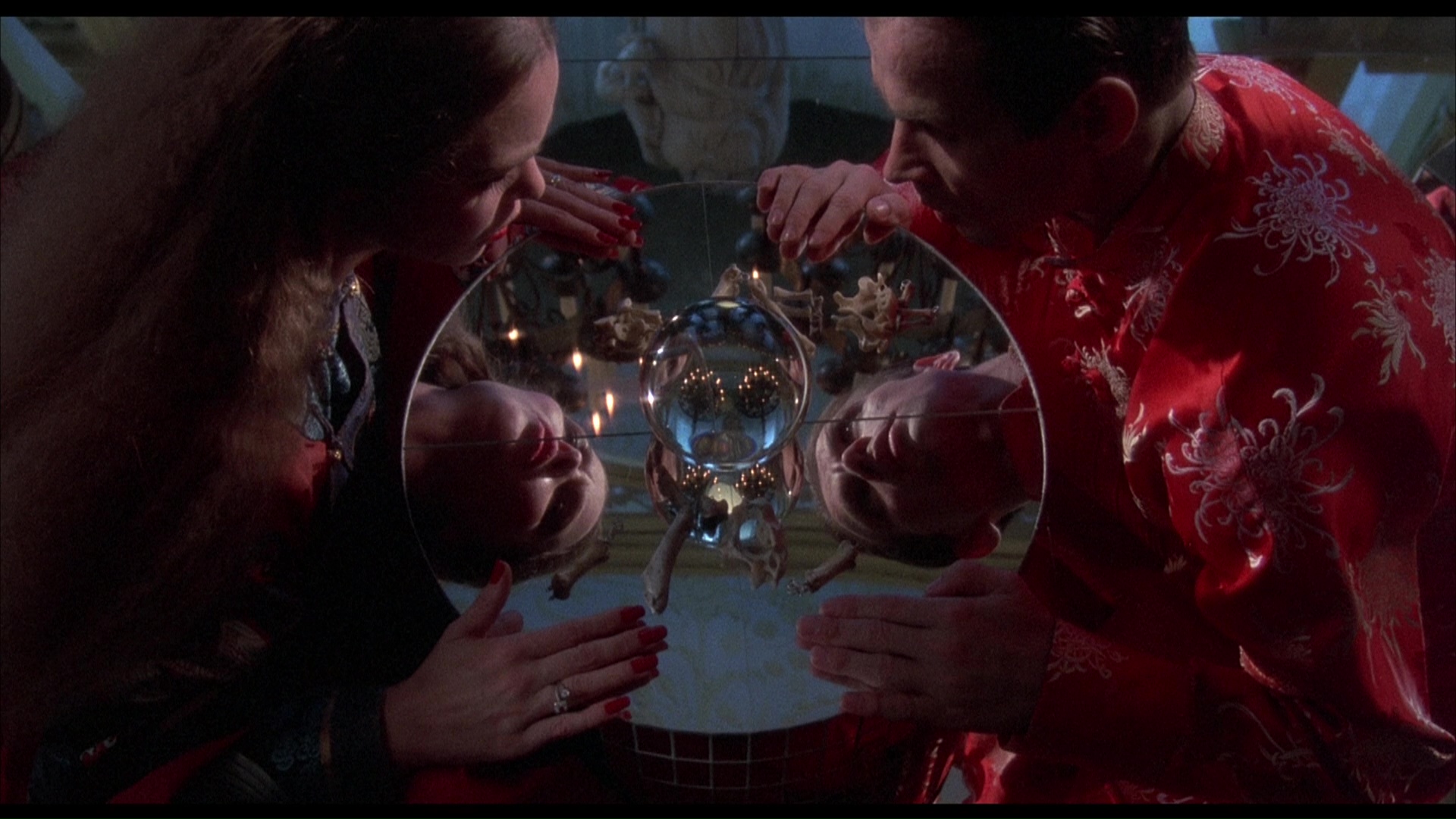 The DTS-HD MA 2.0 mono audio on the Kino Lorber disc sounds fine and is also present on the BFI disc, though the latter also adds an intriguing extra: a stereo mix created for the film's U.S. and U.K. 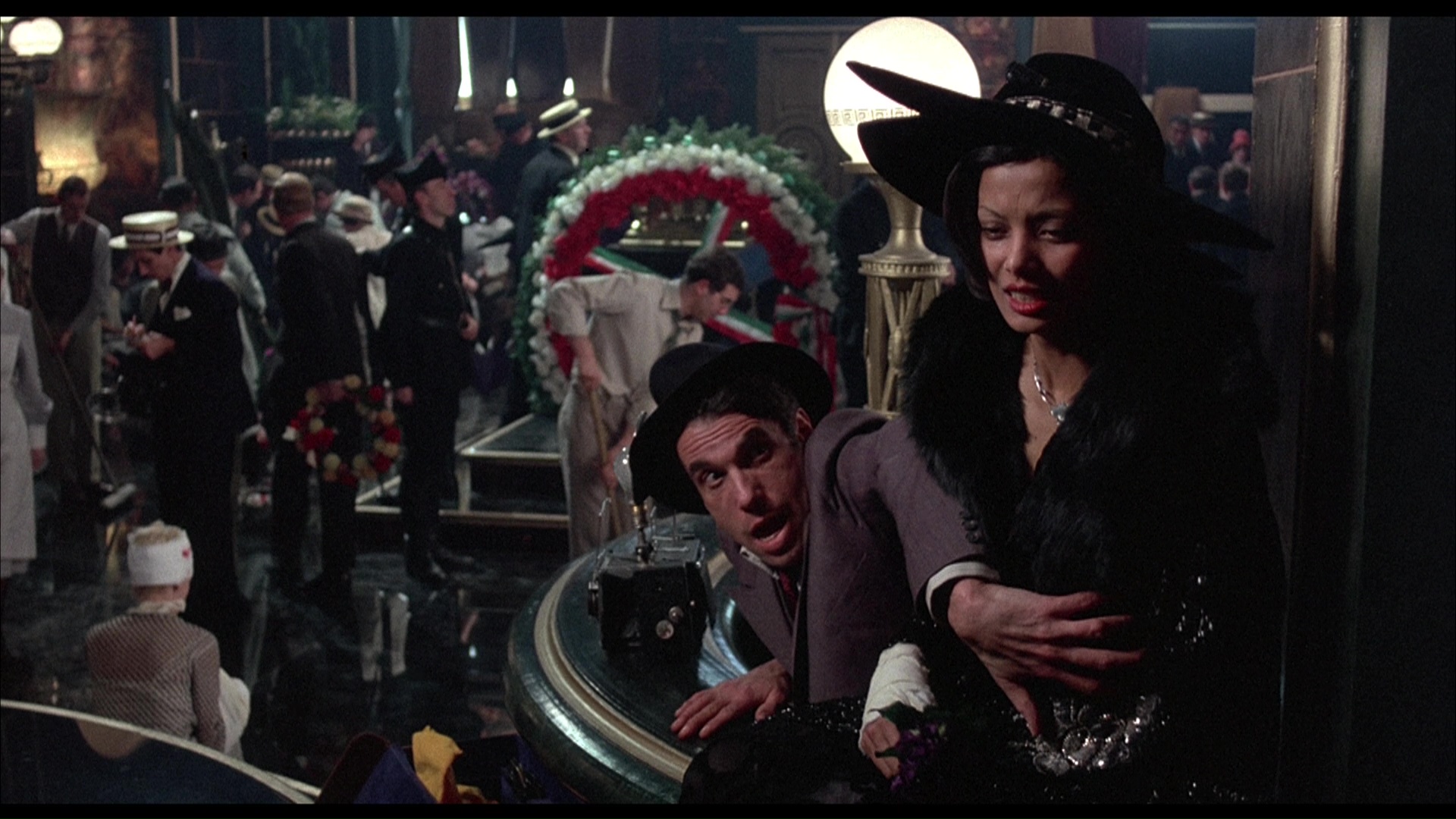 premieres, essentially unheard since then until now. '70s stereo mixing was still imperfect at the time so this is a bit more roughly mixed, but it's a fascinating and very welcome bonus. As for extras, the Kino Lorber disc also adds a "Trailers from Hell" version of the trailer presented by Bernard Rose, a Silent Years TV program with Orson Welles discussing Valentino for 17 minutes, 3 minutes of newsreel footage of Valentino's funeral procession, two trailers, a gallery of production stills, and a trailer for Valentino's Blood and Sand.

The BFI release (which contains both a Blu-ray and DVD) adds on quite a bit in addition to the commentary, Valentino newsreel funeral footage, and two trailers. A 1977 interview with the late Nureyev by Ludovic Kennedy for the BBC show Tonight features a fascinating 10-minute peek at his views on the film and his personal work ethic, including his change of heart after initially disliking Russell's films ("I'm fickle") and beautifully phrased rebuttal when confronted with Phillips' nasty comments about working with him. In a new 22-minute interview, actor Dudley Sutton recalls working with Russell on both this (where he plays "Willy the wanker" in the jail) and The Devils, including some great memories about the late director and tales about the lecherous nature of film crews at the time. Canadian dancer Lynn Seymour offers a 9-minute audio recollection of Nureyev about their friendship and how helped out his fellow dancers, while a different 10-minute gallery features a slew of production photos, costume design drawings, and promotional ephemera. Also included with the main feature as an alternate track is an 89-minute Q&A with Russell as part of The Guardian Lecture series with Derek Malcolm. Held in 1987 as Russell was making a return to England to make Gothic (which really needs a special edition Blu-ray of its own), it's a great, witty chat in which he talks about his British production work, his BBC days, and his approach to biopics that got him branded as an "excessive" filmmaker. Also included with the package is a liner notes booklet with an essay by Paul Sutton, whose excellent past work on Russell is continued here with an insightful look at the film's production and an illuminating perspective on Nureyev's performance that may have you going back right away for a second viewing.