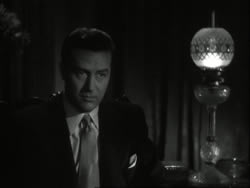 A key entry in the history of Hollywood horror, The Uninvited would be crucial simply because it was a very rare example of a prestige, unabashed supernatural chiller filmed during World War II, a period when such things were off limits unless your name was Val Lewton. (A similar thing happened in England, with Dead of Night also becoming a notable aberration.) Studios had seriously toned down their monster output by this point, with the outrageous Pre-Code horrors of Universal and Paramount in the early '30s trickling down to make room for more disreputable poverty row efforts, most of which revealed their monsters to be average criminals in disg 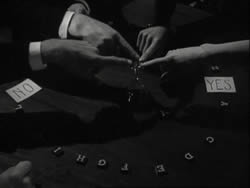 uise. However, Paramount's The Uninvited was something different: a ghost story and swooning gothic romance with a major star (Ray Milland, who would win an Oscar for The Lost Weekend the following year), based on a reasonably respectable source novel (Uneasy Freehold by Dorothy Macardle). It's also outfitted with a swooning piano-driven score by Victor Young, hot off of For Whom the Bell Tolls, whose love theme became the frequently performed standard, "Stella by Starlight." Toss in some elegant costumes by the great Edith Head and gorgeous cinematography by Charles Lang (who went on to shoot the visually similar seaside postwar fantasy The Ghost and Mrs. Muir), and you have a top-tier spook tale even non-horror fans could love.

The fun begins when siblings Roderick (Milland) and Pamela (The Philadelphia Story's Hussey) decide to look for a vacation home along the English coast and stumble upon the perfect house. In fact, they love it so much that Pamela persuades Roderick to give up his career as a music critic so they can move there full time, where he can compose to his heart's content. Stella (Russell), the pretty young granddaughter of the house's owner, Commander Beech (Crisp), tries to discourage them by saying the house isn't for sale, but Beech lets them have the house for a song. As it turns out, Stella's mother died there under mysterious circumstances by falling off a nearby cliff, and Beech would rather take the money and get rid of the house after its previous tenants had complained of "disturbances." These uncanny events seem to be linked to a mysterious upper floor room in a corner of the house, which Roderick decides to make his study. He also finds himself falling for Stella, who has a habit of lingering around the property and falling under the sway of an inexplicable force. The rational Roderick soon comes to believe that there is at least one genuine ghost in the house, and a group seance proves to be the first step in discovering the unseen menace still residing within the house.

A visually stunning production with excellent performances all around, The Uninvited proved to be an auspicious debut vehicle for the fragile Russell, whose life was soon to be filled with tragedy during her short career. The p 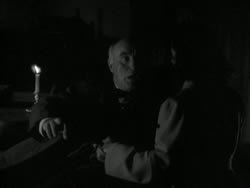 resence of Milland turned out to be a brilliant choice, with his urbane intelligence helping to sell the fantastic events to an audience looking for escapism and elegance. In a highly unusual move for the time, there also aren't any silly comic relief characters; instead the script gives the wittiest moments to the main characters (including a terrific final line) and takes the actual haunting scenes very seriously, climaxing with an apparition that actually delivers what the a 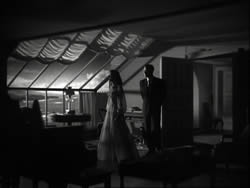 udience wants to see. Perhaps the most surprising thing about The Uninvited is the fact that director Lewis Allen had never made a feature film before; not surprisingly, he never topped it, though before his inevitable move to television, he did turn out some respectable thrillers like Suddenly, The Unseen, So Evil My Love (also with Milland), and Appointment with Danger.

Despite its pedigree and continuing place in the hearts of many horror fans, The Uninvited hasn't exactly been given the red carpet treatment for most of its home video life. It appeared on TV regularly well into the 1990s (usually on AMC), often making for a popular Halloween title, but for some reason Universal held off on giving it a VHS and laserdisc release until both formats' waning days in 1998. Even then the transfer was passable but no great shakes, taken from a pretty flat-looking master with weak black levels. That same version continued to be used for broadcast for well over another decade, including a handful of airings on Turner Classic Movies. Unfortunately it still remains out of circulation on American home video apart from a couple of shady "import" bootlegs ripped (not very well) from the laserdisc. You'd think by now this would have earned a deluxe Criterion Blu-Ray edition or something comparable from the studio itself, but that doesn't seem to be in the cards for now.

Fortunately fans can breathe a sight of relief with the much-needed UK release, a Region 2 PAL DVD that finally offers the film in a worthy transfer with a welcome slate of extras. The film itself looks significantly better than before, video-wise; it isn't a spit and polished full-scale restoration, but the detail and black levels are significantly better than before. The disc actually upscales to HD pretty nicely, and the moody interior scenes within the pivotal house finally have a palpable otherworldly mood thanks to careful lighting and clever use of backdrops and water reflections. The mono audio sounds fine, as it always has, and optional English subtitles are thoughtfully included as well; no real issues there. As for extras, we kick off with the theatrical trailer (probably the same source used for the old laserdisc, which should give viewers an idea of how sorry this looked before), a gallery of posters, lobby cards, and promotional stills, and best of all, a pair of radio adaptations. The first from 1944, the same year as the film's release, is a 24-minute Lady Astor Screen Guild condensing of the story with Milland and Hussey reprising their roles and Betty Field playing Stella. The second from 1949, directed by Allen, stars Milland again and runs longer at 29 minutes, with both the director and star doing a quick q&a about ghosts at the end. Interestingly the first version goes for a more romantic, upbeat approach, painting the story as a slightly spooky melodrama. The latter is much darker and more gothic in tone, going into full-on creepy ghost mode from the opening moments and focusing almost entirely on the supernatural angle of the story. Interestingly, this version also highlights certain aspects of (potential spoiler alert) "loveless motherhood," which sort of makes this story a precursor to the more extreme and shocking treatment of that theme in1945's Leave Her to Heaven. Also included is a 24-page illustrated booklet chock full of international promotional artwork along with an excellent essay by Claudette Pyne on this film in particular, a brief intro by Allan Bryce, Clydefro Jones on golden age Hollywood thrillers, and a James Oliver bio of Milland. A superb horror classic in a respectful edition worthy of any genre fan's collection.