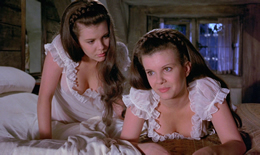 Though it was once common practice for horror critics to completely dismiss the output of Hammer Films during its last gasp in the 1970s, it's clear now that many films from that period are not only worthwhile but wildly entertaining and even transgressive in their own right. Case in point: Twins of Evil, the third installment in the (very) loosely-connected Karnstein trilogy begun with The Vampire Lovers and followed by the lurid Lust for a Vampire. All three films are more or less inspired by the classic novella "Carmilla" by J. Sheridan LeFanu, which was also adapted with even less fidelity for such films as Blood and Roses and The Blood Spattered Bride. This time Hammer tossed pretty much everything nearby at the screen: Playboy centerfold twins! Satanic sacrifices! Stake burning! Peter Cushing as an inquisitor in a weird hat! And somehow, the whole thing actually works.

While busy Uncle Gustav is out roaming the countryside accusing innocent girls of vampiric wickedness and burning them alive, his two nieces, Frieda and Maria (t 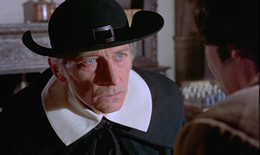 he Collinson twins), arrive from Germany and have to subdue their flashy outfits to appease his puritan demands. Meanwhile the wilder of the two sisters, Frieda, finds herself mysteriously drawn to the nearby Karnstein castle where a sinister count (Thomas) and his henchman Dietrch (Price) sacrifice random maidens in blood ceremonies. Soon Frieda's itching to run away to join the vampires, Maria's accused of the latest local atrocities, and Gustav's getting his matches ready...

Though it's as fixated on heaving cleavage as any other Hammer film, Twins of Evil is a more atmospheric and intense film than expected largely thanks to the rich cinematography by Dick Bush (Tommy, Phase IV) and assured direction by John Hough, a veteran of TV's The Avengers who went on to such cult classics as The Legend of Hell House and Dirty Mary Crazy Larry (not to mention The Incubus, the two '70s Disney Witch Mountain movies, and The Watcher in the Woods). Yes, it feels like the script is often drawing random plot elements out of a hat, but the headlong ferocity of the project keeps it all on track in a manner similar to the even more extreme Vampire Circus (which literally seems to shift story gears every five minutes). Neither of the Collinsons (who had already appeared in such films as The Love Machine and Some Like It Sexy) are called upon to do any heavy lifting in the acting department, but despite their obvious dubbing, they acquit themselves well enough as Hammer glamour girls and make for the most fetching vampire-related movie twins this side of a Jean Rollin movie. Finally a special shout out has to go to 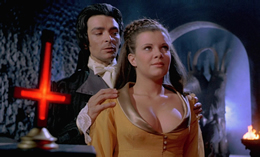 composer Harry Robinson (aka Harry Robertson), who scored all three of the Hammer Karnestein films and does his best work here with a symphonic storm that especially compliments Cushing's nasty, ice-cold portrayal.

Like the other three Hammer films controlled by Rank (Vampire Circus, Countess Dracula, Hands of the Ripper), Twins of Evil has had a weird video history with long periods of unavailability in both the US and the UK at different intervals. In America it was first released on VHS from Vidamerica and very briefly issued on laserdisc from Hallmark, but a DVD release didn't seem to be in the cards for many years. Meanwhile the UK got an anamorphic transfer first from Carlton (as part of a Hammer three-film box, then solo) and then as a semi- 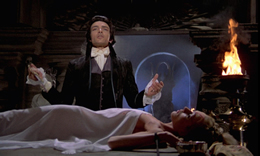 special edition from Network. The Synapse dual-format release (containing a Blu-Ray and DVD) is by far the best option, though you'll want to definitely go for the Blu-Ray as most of its extras aren't ported over to its standard def companion. The transfer itself is sterling, of course, with correct 1.66:1 framing and nice detail throughout. There's a little bit of what appears to be very mild water damage a couple of times at the far right edge of the screen near the beginning, but otherwise it's in immaculate shape and a real joy for Hammer fans. An isolated music and effects track is included in addition to the standard English mono track (in DTS-HD MA mono), while optional English SDH subtitles are also thoughtfully included and a very nice touch. The familiar theatrical trailer is included along with a double-feature trailer alongside Hands of the Ripper, both in HD, while the hilarious deleted scene from the Network release is carried over here. Brace yourselves... it's a musical number.

However, the biggest extra by far is the mammoth new 84-minute documentary, "The Flesh and the Fury: X-posing Twins of Evil." (Yep, it's only three minutes shorter than the actual movie!) The first half hour is basically a primer on the origins of "Carmilla," the status of Hammer in the early '70s, the relaxation of censorship, and the creation of The Vampire Lovers and Lust for a Vampire (the latter amusingly getting only about five minutes of screen time; that poor movie will never get any respect!). Then it's on to the main movie itself, which is covered in astounding detail from its original conception (which was originally a bit different) through its censorship history, music score, and casting, among many other topics, with Hough on hand to talk about it at regular intervals. Other commentators sprinkled throughout include Joe Dante, Tim Lucas, David J. Skal, Kim Newman, Hammer collector/expert Wayne Kinsey, "Carmilla" historian John-Paul Checkett, and more, plus archival interviews with producer Michael Style and Hammer honcho Michael Carreras. As with the previous "Bloodiest Show on Earth" extra for Synapse's Vampire Circus, it's all fast-paced, colorful fun; probably the wildest touch is the occasional injection of new lesbo-vamp transition footage with female models which prompts the unforgettable closing credit for Carmilla sequences "filmed in Chattanooga, TN." You gotta love it! Also included is the much shorter (23 minutes) "The Props that Hammer Built," a nifty tour through Kinsey's collection including some great castle models. Last up you get a nifty "motion" still gallery of promotional art, photos, and making-of shots, wrapping up a bountiful, bodacious package that should make any Hammer horror fan drool with glee.