Released during the heyday of The Twilight Zone, this sexy schoolgirl import has nothing to do with Rod Serling's pioneering TV program; in fact, there's nothing remotely uncanny about this girls-loving-girls French romp starring Laurent, a rival to Brigitte Bardot who made her debut in this film simultaneously with The Nude Set, both of which opened in France in 1957. However, The Twilight Girls didn't appear in America until 1959; the French-language original (entitled Les Collégiennes) was dubbed, trimmed down, and spiced up with insert shots involving semi-nude schoolgirls touching 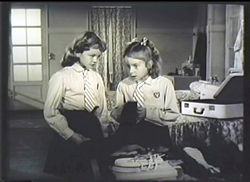 and flirting with each other at night. This modified version, released by Audubon Films, touched off a scandal when the New York censor board hauled it into court, ensuring plenty of box office attention for what was originally a fairly mild story of blossoming adolesence.

The story is pretty business as usual, but for the record, our lady Laurent is Anne-Marie, the new arrival at an exclusive boarding school where the girls apparently spend all their time taking art classes and gossiping when they're supposed to be sleeping in the dorm. Several other girls exchange longing looks at each other during off hours, and soon Anne-Marie becomes the objet d'amour for pretty but vaguely masculine Marthe (Estella Bain). To make matters more confusing, the newcomer is also wooed by handsome Christian (Lola Montes' Henri Guisol), while the other girls 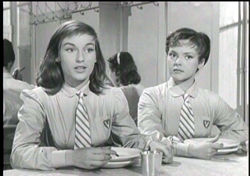 are busy catfighting in the cafeteria and spreading rumors across the school grounds.

As it now turns out, the biggest casualty of Audubon's editing from the French original was the character of Adelaide, the headmistress' mischievous 13-year-old daughter, played by none other than a prepubescent Catherine Deneuve. Apart from a couple of fleeting background appearances, Deneuve was nowhere to be found in The Twilight Girls but has been reinstated for the DVD, with her scenes subtitled in English. Even as a newcomer she's quite charming and funny, and her scenes are a welcome recovery; in fact, with this subplot restored, the film feels considerably less smutty. The DVD as it stands represents something of a composite, containing the deleted Deneuve scenes while retaining the naughtier American bits, with one of the new lesbian students purportedly played by a young Georgina Spelvin (of Devil in Miss Jones fame) with her trademark frizzy hair already in place. If that really is Georgina, 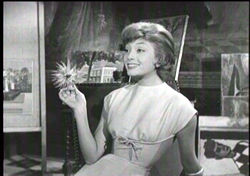 she certainly lost a lot of baby fat over the following decade thanks to her stripping career.

Most of the The Twilight Girls looks quite nice on the DVD, a few notches above past VHS editions, though the French language inserts (with huge permanent subs) are soft and dupey-looking with a noticeable color tingle over the footage. This only affects a few minutes of the running time, with the Audubon footage looking stable and, for the most part, crisp. The most interesting bonus is "The Making of the American Version," in which a female narrator explains how certain innocuous shots were expanded and refilmed to introduce lesbian activity where none previously existed; one can only imagine how innocently this film played in its native country. The heavy-breathing theatrical trailer is also included, along with an amusing Deneuve photo gallery showing the actress much further in her career in the likes of Tristana and Young Girls of Rochefort.