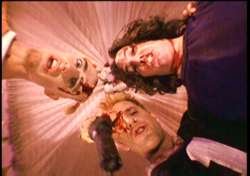 Originally released to coincide with the release of Baz Luhrman's modernized big-budget pop epic with Leonardo DiCaprio, this "Tromatized" spin on the Shakespeare classic (itself a tragic riff on an oft-adapted Italian tale with at least three different endings) was the studio's first stab at a high-profile theatrical original after several years of regurgitated sequels and questionable pick-ups. Coinciding with the genesis of the Internet and DVD eras, Tromeo and Juliet also featured a more ambitious scale in both execution and promotion than before, featuring a sprawling and comparatively complicated narrative and a PR blitz that wound up converting a new generation entirely unaware of the charms of Toxic Avenger's antics. 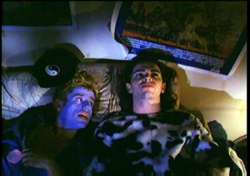 Meanwhile Juliet (Jensen) is at the mercy of her vile father, Cappy (Shaun, actually actor William Beckwith under a pseudonym to dodge union wrath), who gets off on confining her in a giant glass cage for activites thankfully left mostly to the viewer's imagination. Naturally our two maladjusted teens meet at a costume party and fall madly in love, with Tromeo later paying her a nocturnal visit in her prison where they make the beast with two backs under the gaze of Juliet's cook and sometimes lesbian lover (Rochon). Soon all hell breaks loose as skulls are repeatedly punctured with sharp implements, one character reveals a twisted genectic secret with a bovine twist, and numerous others get tattoos and body piercings, all leading to a seriously sick climax that tosses Shakespeare's resolution out the window in favor of something far more perverse.

Though just as coarse and ridiculous as you might expect, Tromeo and Juliet throws out enough curveballs to easily distinguish itself, from Motörhead's Lemmy kicking things off as the narrator to an unforgettable dream sequence involving popcorn, rats, and a pregnant Juliet that might be the weirdest single moment in the Troma library. The surprisingly adroit screenplay is several notches more accomplished than usual here thanks to its nifty wordplay, creative profanity, and bizarre manipulation of iambic pentameter; interestingly, one of the co-writers was James Gunn, who went on to write the Dawn of the Dead remake and write and direct the entertaining Slither (not to mention writing both Scooby-Doo movies, but we'll forgive him for that). On top of that, the eclectic soundtrack mixes up a variety of punk and metal acts including Unsane, Sublime, Superchunk, Motörhead, Super Nova, and many more, which adds to the anarchic, freewheeling mood of the film. Definitely not for all tastes, but it's become a fan favorite for a very good reason. 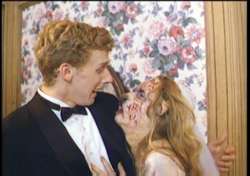 The video history of Tromeo and Juliet is even more complex than usual for a Troma film. VHS saw two incarnations of the film, an unrated director's cut and an extensively edited R-rated cut that really makes no sense at all. The uncut version was also released as a letterboxed laserdisc that quickly drew fire from fans as the film was shot full frame and didn't really lend itself well to being matted off to 1.85:1; in particular, a lot of nudity and monstrous make-up was lost in the process. The DVD edition followed shortly afterwards and wisely remained unmatted, a presentation that remains the standard to this day.

Surprisingly, Troma's leap to HD has resulted in a transfer that's not only significantly better (much stronger colors, far greater detail, more accurate film grain, no more cruddy compression) but also reveals significant extra slivers of information on the sides of the frame, especially the bottom. (Skin fans take note, a lot more is now visible during and after the title characters' first tryst). Yes, it still looks like a Troma film which means it'll never look like a super-slick, shot-on-digital studio production, but what you get here is definitely satisfying and a significant upgrade over the 14-year-old transfer that preceded it. The hilarious DVD commentary by Lloyd Kaufman is carried over here along with a whopping three additional commentaries: Kaufman and Gunn, Gunn and actor/brother Sean, a regular on TV's Gilmore Girls (which was recorded for the original DVD but dropped for being "too obnoxious"), and editor Frank Reynolds and Poultrygeist editor Gabriel Friedman. All are very lively, though the Kaufman/Gunn "ten years after" track is definitely the best as they let the barbs fly fast and furious (including a priceless opening anecdote about Gunn's hatred of Lemmy, who apparently showed up drunk, kept changing his lines, and lost his teeth at a strip club). A batch of deleted scenes is carried over from the DVD, focused mainly on the extensive footage used for a wild variety of different endings. New extras include a ton of cast and crew interviews (Stephen Blackehart, iffany Shepis, Sean Gunn, Debbie Rochon, Wendy Adams, Lisbeth Kaufman, Lemmy, composer Willy Wisely, Joe Lynch, associate producer Andrew Weiner, line producer Franny Baldwin, "stunt nipple" Sandee Brockwell, grip/driver Dylan Forer, and production assisant Daniel Epstein), the theatrical trailer, a mostly frivolous fan recreation of the "balcony" scene, rehearsal footage of Jane Jensen and Debbie Rochon, and Lloyd's intro and outro from the laserdisc release. Then there's the usual batch of oddball Tromatic extras: "Lloyd Kaufman Makes Out with Princess Diana" (actually a dude in a cheap princess dress), "Jane Austen Will Have Her Revenge," "What Your Doctor Never TOld You about Masturbation," "An Important Message for Hampsters" [sic] with Toxie, the Radiation March, plugs for three Troma books, and two Gunn-centered video extras, "Slithering through Hollywood" (Lloyd's on-set video diary from Slither) and a visit to former Troma employee Eli Roth at his birthday party during the release of Hostel. (Oh yeah, plus bonus trailers for Class of Nuke 'Em High, Pep Squad, and Dark Nature). For some reason the negligible "Truth or Dare with the Cast," "Special Message from Lemmy," and horrific "behind the scenes" extras from the original DVD have been dropped, but they won't be missed by any but the most die-hard Tromaphile. Continuing Troma's respectable BD treatment of its back catalog, this huge, ambitious package should please anyone with a fondness for Shakespeare and self-mutilation.