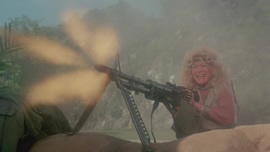 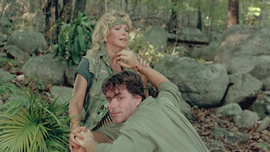 At the time of its release during the transition from Reagan to the first Bush, Troma's War marked a turning point for the company whose name was actually imbedded in the title (in what would soon become a tradition for many of its higher-tiered releases). The breakthrough success of The Toxic Avenger had given the scrappy New York-based purveyors of extreme exploitation primarily geared for the video market realized they could set their sights higher for audience acceptance, blending squishy slapstick comedy seemingly ripped from an edition of Truly Tasteless Jokes with over-the-top, unrealistic gore-- and lots and lots of loud overacting. This film boasted a higher budget than usual and was designed for theatrical cult status, though a not particularly receptive MPAA demanded so many cuts the film eventually lost nearly 20 minutes on its way to an R rating (and pretty much its entire reason for existence in the process). Fortunately most video audiences could sidestep this silliness due to the wide availability of the uncut version, though the film never came close to gaining the status of the Toxie series. Seen now, it's a flawed but fascinating time capsule of a dying indie theatrical wave and a peculiar political statement whose naivete has somehow come back around to being alarmingly current again.

After crashing on the beach of a remote, seemingly deserted tropical island (in a sequence bearing more than a passing resemblance to the pilot episode of a certain hit ABC series), the survivors able to crawl from the wreckage of their plane find an even worse threat awaiting them: a frenzied group of extremist terrorists who have banded together (for reasons not revealed until later) to train for a violent mission. Thinking the interlopers are mercenaries hired to take them out, the villains arm up and 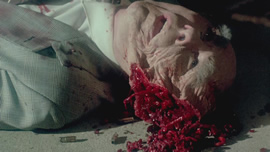 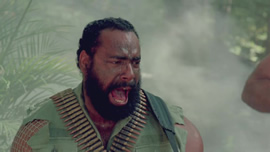 In what became something of a regular in films helmed or written by Troma honcho Lloyd Kaufman, Troma's War takes a quick time out to deliver an impassioned message about the evils of right-wing and terrorist extremism which are lumped in together here as the same oppressive force, a before-its-time outlook later popularized in a number of George W. Bush-era books and films. Of course, it's a bit hard to take seriously when it's surrounded by a body count that goes into the triple digits before the one-hour mark; mostly it's a big, dumb, fun Rambo parody that's way overlong but generally spirited all the way to the absurd ending. The cast does an efficient job delivering "Tromatic" performances, often with baffling make-up accessories like a bad guy sporting a pig snout.

Troma's initial DVD early in the format's history featured a dated transfer culled from the VHS era along with the usual clutch of "extras" primarily featuring Kaufman running around with goofballs around the office, though his intro at least provided some context. The belated "Tromasterpiece" edition of Troma's War on DVD is definitely a substantial upgrade in the extras department; not surprisingly, it still features the same recycled transfer (albeit with marginally better compression), but at least here the slew of bonus features shed a lot of light on how this film came to be and somehow slipped off the radar of its intended audience. Kaufman contributes an interesting commentary track that serves as a useful primer on how to make New York look like a Caribbean island (not too dissimilar from what Combat Shock did to create its Vietnam) and explains the distribution entanglements which led to the film's abortion of a theatrical release. Pretty much all of the available 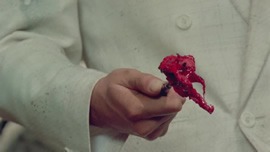 cast pop up for the short but substantial video extras including "Veteran's Day: A Post-Tromatic Reunion" ("terrorist" performer Joe Fleishaker interviewed by the film's FX artist and Redneck Zombies auteur Pericles Lewnes), "Rick Washburn Shoots the Shit" (self-explanatory), "Post-War Reflections" and "War Talk" (with leading man Bowen and others offering some brief on-camera anecdotes), "Three Minutes with Rolfe" (a chat with the film's P.A. and future There's Nothing Out There director Rolfe Kanefsky), "London's War" (a quick interview with cinematographer "James London" aka James Lebovitz), a couple of trailers, a very funny "Kill-o-Meter," and promos for other worthwhile "Tromasterpiece" releases. 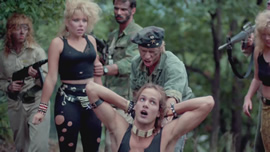 Not surprisingly, Troma revisited the film as a Blu-ray release containing a much-need HD upgrade of the film itself. The 1.78:1 framing substantially snaps the compositions into tighter, more pleasing focus, and the uptick in detail is substantial across the board compared to the decades-old transfer we were stuck with before. The compression is iffy in spots with some of the faster action threatening to break up a few times, but on the whole it's a major improvement and should make fans happy. As usual the Dolby Digital audio benefits from the fresh transfer but won't blow away any audiophiles. Extras-wise the most substantive material is carried over -- the commentary, "Post-War Reflections," "Veteran's Day," the Washburn interview, theatrical trailer, and "London's War" -- while Kaufman contributes a surprisingly clever new video intro in which he posits this as a training film declassified through Wikileaks that inspired Lost and American Sniper. Also new is a "Post-War Memories" featurette with Kaufman and Herz, who chat for 20 minutes about the "six million squibs" used during the film, the extreme requirements of the MPAA to get an R rating, the film's popularity in Germany and Japan, the "chic" value of war now, and much more. In a rare break with their usual tradition, the Blu-ray does not come packaged with a copy of the older DVD. As Troma's last big theatrical hurrah before they went on to home video infamy with more audacious (and arguably more accomplished) fare, this one has finally been given its chance to shine and still holds up as one of the company's most ambitious, fascinating, and unapologetically violent offerings.