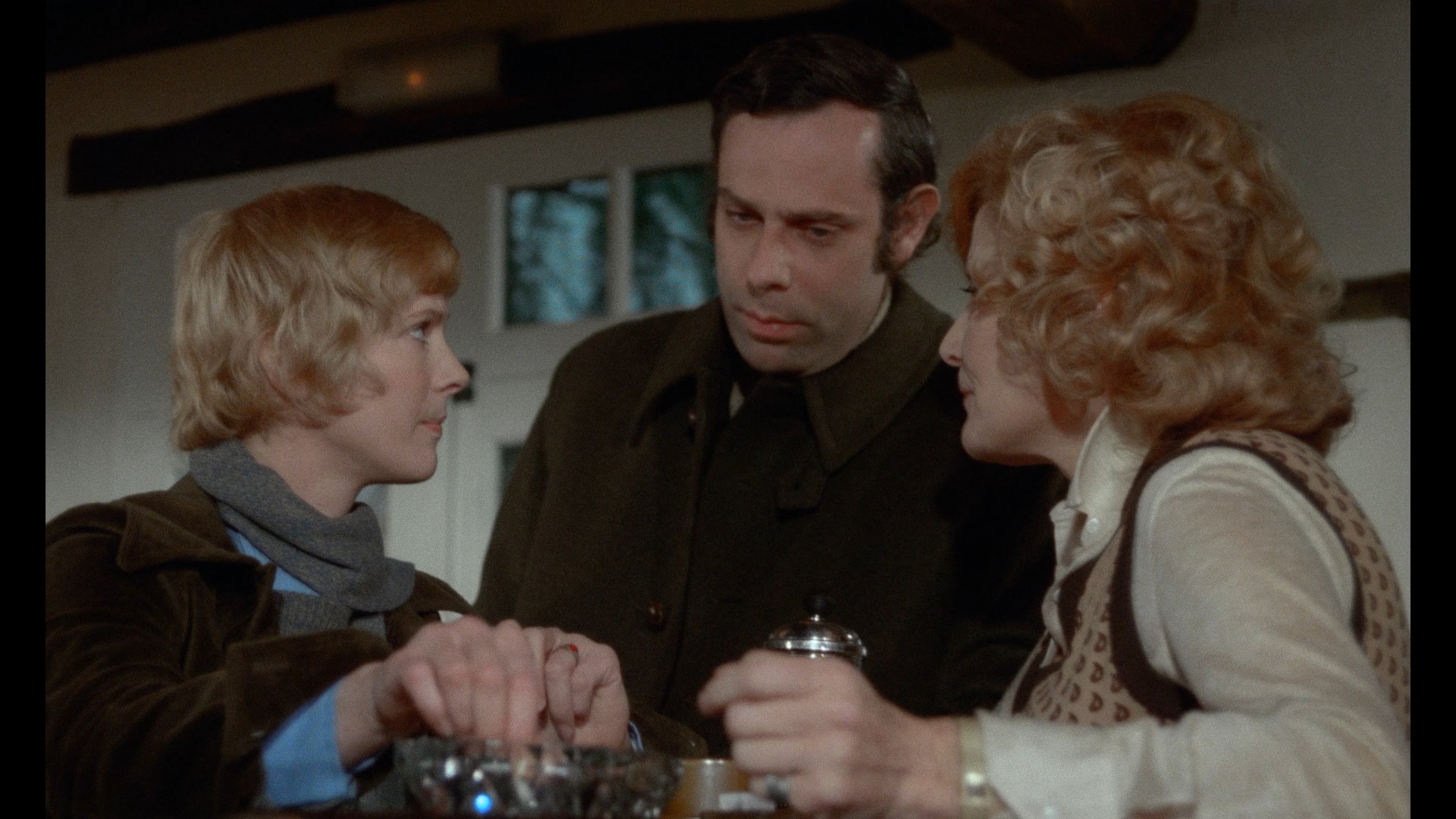 of the backwoods thrillers populating American drive-ins at the time, La Traque (The Track) adds a heavy, very 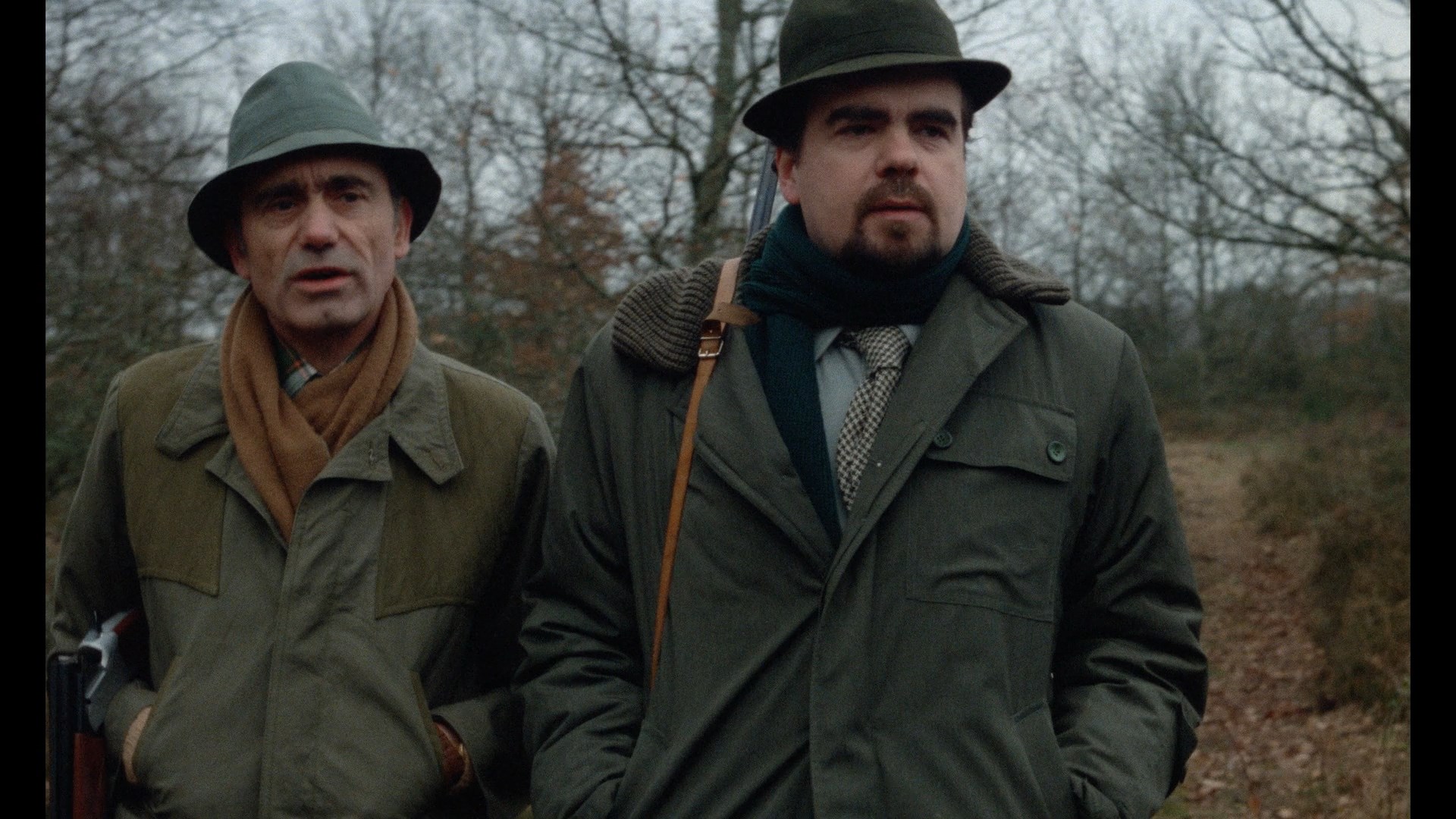 potent dose of social criticism for a plot that seems to indicate a rape-revenge film but instead delivers something a lot more unexpected. Cult movie icon Mimsy Farmer (Four Flies on Grey Velvet, Autopsy, The Perfume of the Lady in Black) provides a fascinating contrast to the rest of the cast comprised of some of France's most esteemed actors of the time, making this perhaps the strongest film from director Serge Leroy (Attention, les enfants regardent).

In a Normandy village, Helen Wells (Farmer) arrives to rent a house while she works as a teaching assistant at a nearby college. The male population consists largely of bourgeois hunters including the first one she meets upon arrival, Philippe Mansart (Bideau), who gives her a ride. Along the way they cross paths with Paul and Alan Danville (Leotard and fellow Four Flies star Marielle), who later decide to organize a hunt after hearing of a boar spotted in the woods. The gun-toting trio, joined by David (Moonraker's Lonsdale), Captain Nimier (Constantin), and Chamond (Robin), head off after their prey while Helen decides to go exploring in the area. Eventually the group splits up which results in the 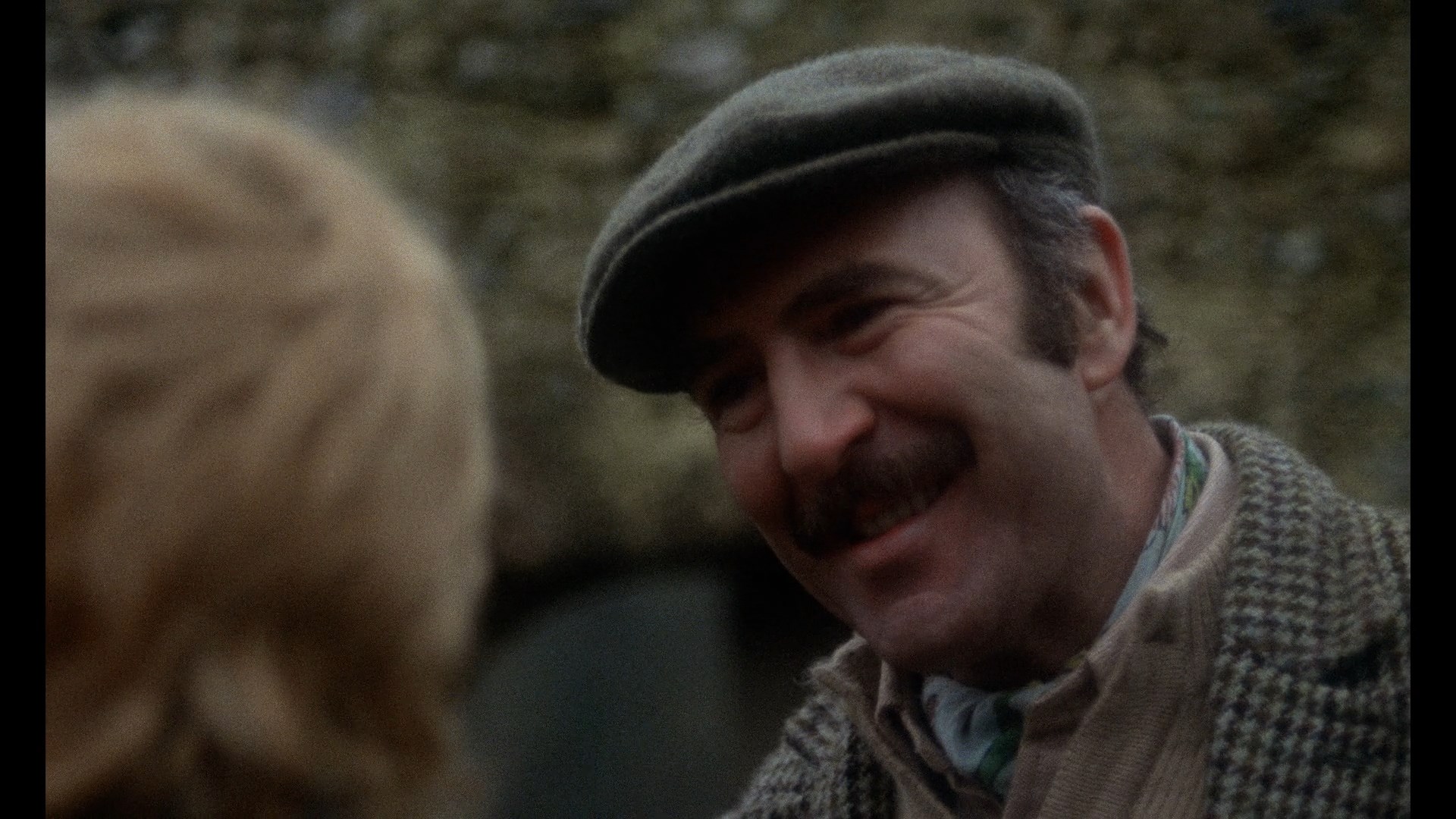 Danvilles cornering Helen in a barn and raping her, which she vocally plans to 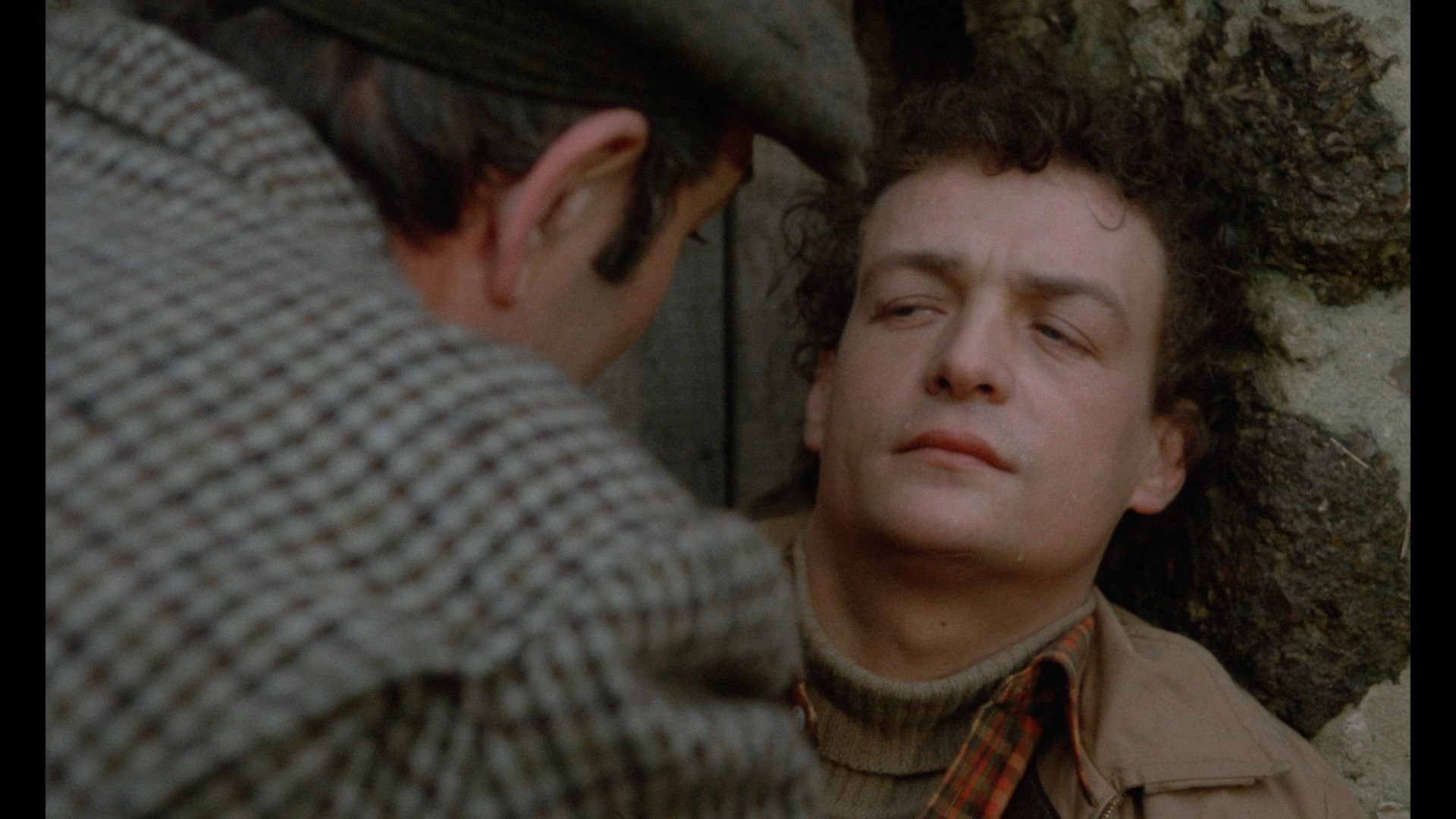 report to the police. Each of the men reacts differently, especially after Helen unloads a shotgun at Paul's torso, which leads to them tracking her across the countryside in an effort to keep her from reporting the crime.

Unsettling in a very different way from films like I Spit on Your Grave, The Track is a ruthless examination of how group psychology can lead to monstrous behavior even among "respectable" people who think they mean well. The fact that the bulk of the film involves the tracking of Helen means the viewer is trying to parse out the intentions of each of the men, some initially more sympathetic than others, which results in a haunting finale that doesn't quite go in either of the directions you would normally expect. In fact, it's the film's ultimate condemnation of complacency as much as overt violence that really jabs you in the ribs, with excellent performances all around keeping the tension high. The damp autumn setting and almost complete lack of a music score for most of the running time add to the chilly effect, all the way to a final scene that offers no reassurances.

Released theatrically in France by none other than Warner Bros., The Track has floated around on the gray market for many years with custom subtitles on a transfer pulled from the Warner Bros. VHS and DVD editions released in France. In 2021, Le Chat Qui Fume released the film in two editions, first a region-free UHD and Blu-ray combo pack (which 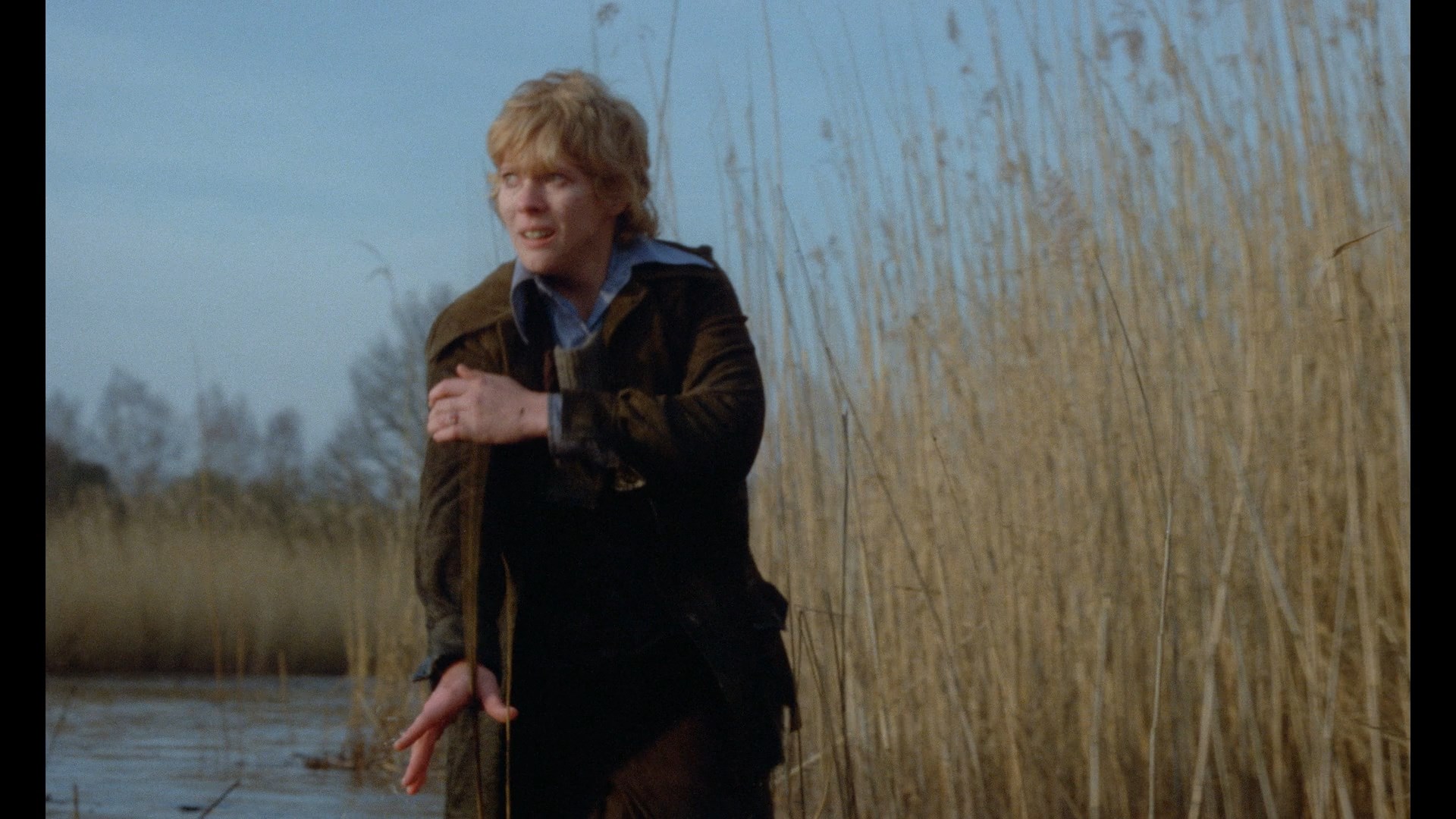 sold out very quickly) and then a standalone Blu-ray. So bare bones it doesn't even have a menu, the UHD (which doesn't have HDR) looks a bit more detailed and tightly resolved than the Blu-ray, but overall you're fine with either option. The film itself has a DTS-HD MA 2.0 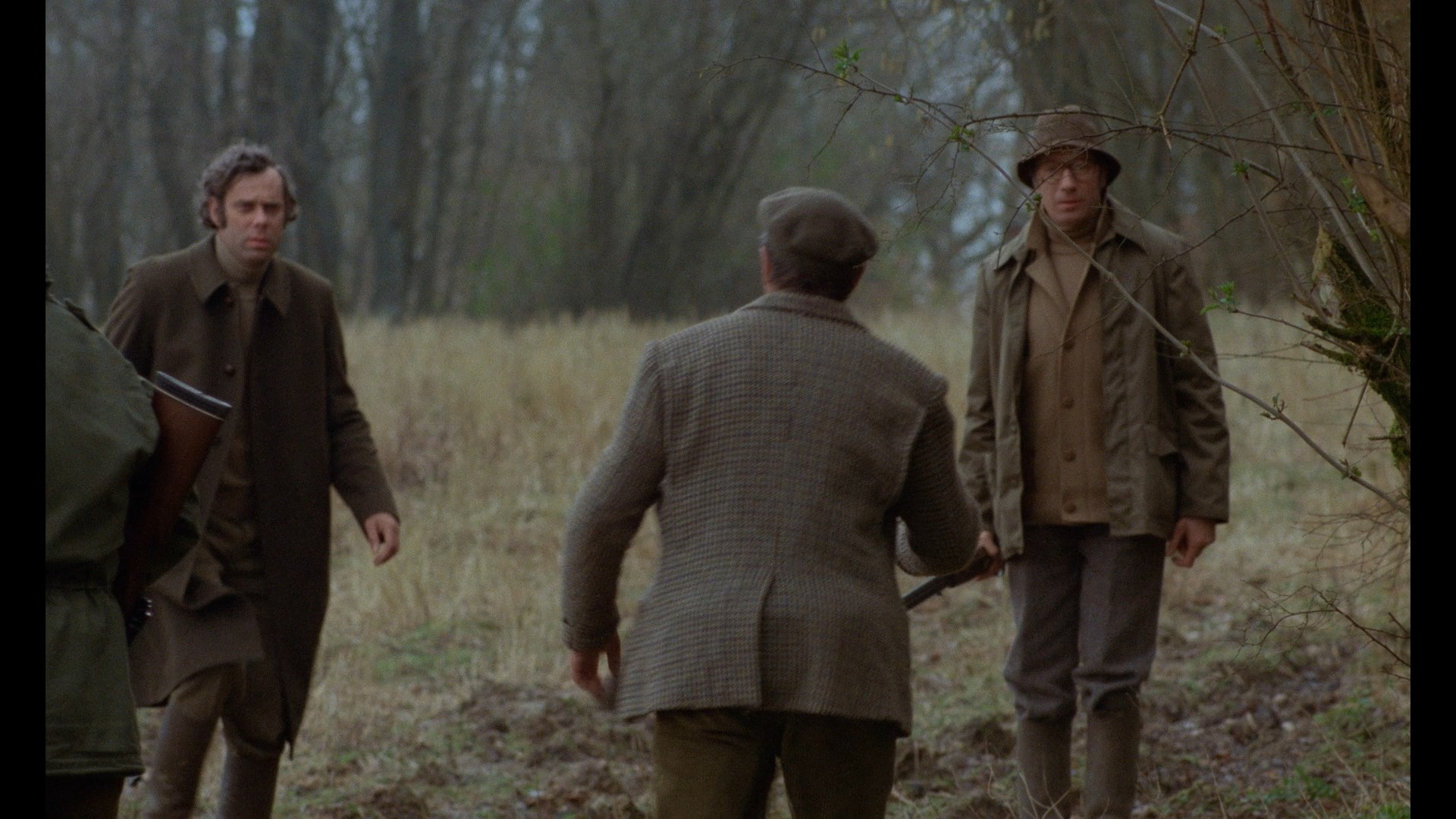 French track with optional French subtitles, and the restoration looks excellent with the very earth color scheme coming across nicely. The extras (none English friendly) include the new "Jean-Luc Bideau, Le Chasseur" (16m58s), a French TV interview with Farmer (10m45s) talking about the "severe" project, a making-of featurette (9m28s) showing the cast and crew at work in the countryside, and the French trailer.

In 2022, Camera Obscura brought the film to German Blu-ray (Region B, contrary to the region-free symbol on the typically impressive packaging) complete with optional English or German subtitles for the LPCM 2.0 French track. The presentation appears to be identical to the French one, which is good news. The French trailer is included here along with an 18-image gallery, plus the Bideau interview now with English or German subtitles. It's a fascinating, thorough chat that starts off covering his start in acting on stage and in films before going straight into this title, including Leroy's desire to cast him in a film and the undue, method-style influence Marielle exerted over the rest of the cast. He also wonders how the film would be received today, especially from a feminist perspective. The mediabook also comes with a booklet featuring a new German-language essay by Dr. Marcus Stiglegger.