Sooner or later the Dogma trend initiated by Lars von Trier and cohorts will wear itself out, but until then we'll have to contend with films like Too Much Flesh. For the uninitiated, Dogma (or Dogme in its native country) is a set of naturalistic rules imposed on a film involving the use of natural light, no genre conventions, no tripods, and so on. Sometimes the approach works, most notably in the Danish masterpiece The Celebration, but more often it simply induces headaches. Jean-Marc Barr, a talented actor who has worked with von Trier on several occasions, decided to turn director by collaborating with his friend Pascal Arnold for the fifth official Dogme film, Lovers. They joined up again, with Barr directing and acting, for Too Much Flesh, a wacky indictment of American puritan values that must be seen to be believed.

We first see thirtysomething Illinois farmer Lyle (Barr) strolling naked through a cornfield, apparently having some kind of sexual communion with nature. You see, poor Lyle is still a virgin, unable to consummate his marriage with brittle Amy (Barr's Big Blue co-star, Rosanna Arquette) thanks his traumatic high school years during which he was taunted because of his oversized manhood. Really. Enter French coquette Juliette (Élodie Bouchez), who shakes up the conservative community when she begins a very public affair with Lyle. Amy doesn't take too kindly to the idea, and things quickly slide downhill after Lyle and Brigitte initiate a young farmboy into their sensual shenanigans.

While it seems Barr and Arnold intended this to be a scathing look at hypocrisy and sexual persecution, Too Much Flesh is undermined by its insistence on portraying the ridiculous events with utter seriousness. Attempts at small town Americana come off extremely cockeyed, as do most attempts by French and Italian directors to zero in on U.S. culture. In the grand tradition of Romance, Intimacy, et al, the film also throws in lots of sex, much of it possibly unsimulated. Of course, the difference here is that the camera never really actually shows much; the normally uninhibited Bouchez (The Dreamlife of Angels) and Barr (who worked together 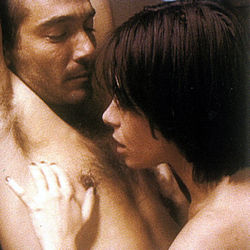 before on Lovers and Don't Let Me Die on a Sunday) mostly do a lot of rubbing underneath clothing, and even the few nude scenes are oddly coy. The camera constantly contorts and swerves to avoid showing the main character's oft-discussed deformity, turning the sex scenes into unintentional comedy pieces. However, the most delirious high point must be the finale, an attempt at Scarlet Letter style tragedy that pushes any semblance of credulity right out the window. At least the acting is fairly good, considering, and the always interesting Arquette - still proudly showing off her body well past forty - makes the most of her psychotic supporting role.

Though it's unlikely to play too widely outside of France, Too Much Flesh is worth checking out on DVD as an example of Dogma cinema gone haywire. Paramount's DVD looks fine considering the digital video origins, and the anamorphic widescreen framing doesn't seem to crop out anything vital. A standard Dolby 2.0 surround track mostly consists of ambient noise flooding to the rear speakers, while the dialogue (recorded in English) is usually clear despite the primitive sound recording. The film can also be played with a peculiar French dub track or in English with optional French subtitles. The disc also includes the theatrical trailer (with a few shots not in the film itself), a trailer for Lovers, and an audio commentary by Barr and Arnold, in French.