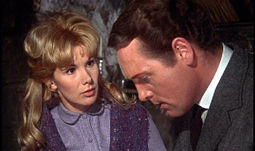 on her pet cat, Thomasina, but tragedy strikes when the cat is crushed by a stack of wooden crates at a food market. Distraught, the girl takes the stricken Thomasina to her father who declares the feline beyond medical help and puts it to sleep. Mary and her friends hold an elabroate funeral for Thomasina, after which she retreats into silence and believes she has buried her father instead. In the afterlife, Thomasina rejoins her Egyptian god ancestors and returns to earth for her second life at a nearby cottage owned by "local witch" Laurie McGregory, who displays an uncanny talent for healing animals. Andrew's trigger-happy tendencies draw the ire of the townspeople, who believe any man capable of killing his child's pet isn't worth trusting. However, fate and a vicious band of travelling gypsies intervene to bring Laurie and Andrew together, with the reborn Thomasina playing a vital role when Mary's life hangs in the balance.

Along with equally whimsical and disturbing Darby O'Gill and the Little People, this underrated fable (based on an excellent novel by Paul GallicO) is one of the best attempts at non-musical fantasy from the wildly erratic Walt Disney Studios. Surprisingly mature, the film grapples with some difficult topics including euthanasia and the benefits of mercy, while the overwhelmingly pagan tone of the story is barely diluted by the injection of a priest character who occasionally urges Anthony to drop to his knees and pray. The startling afterlife sequence (complete with 40 Siamese cats and a huge, gold feline god) is obviously a highlight, but the 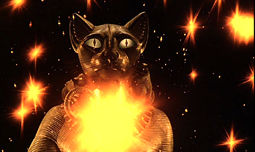 rest of the film manages to hold up equally well even when the finale treads a little too close to familiar Song of the South territory (dying child, worried parent reaching out to folklore for help, and so on).

Best known for Jason and the Argonauts and some of the best episodes of The Avengers, director Don Chaffey displays a sure hand for both setting and character, using the beautiful Scottish landscapes to striking effect. The desolate funeral sequence is one of the more harrowing in the Disney canon, lightening only by the knowledge that the cat will soon return in one form or another. The pre-Prisoner McGoohan and the stunning Hampshire make a surprisingly charismatic screen couple (though according to her interview on the DVD, the two barely spoke at all between takes), while Dotrice easily outshines her child costars 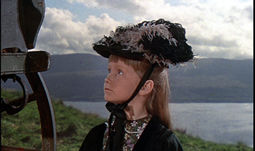 (including Matthew Garber, who went on to play her brother in Mary Poppins).

A welcome reprieve from years of muddy TV prints and overly hot video transfers, Disney's DVD looks about as close to perfect as one could hope. Apart from some dingy rear projection work in a few shots, the elements look crystal clear and feature subdued, accurate color tones throughout. The mono audio sounds fine, and good luck getting that theme song out of your head afterwards. Extras kick off with an 8-minute interview with Hampshire (who still looks great), "Disney's Beautiful Witch," in which she discusses her first Disney project and reveals how some of the more elaborate scenes were created. "Disney's Purrfect Cat Stars" features an excerpt of Uncle Walt from The Wonderful World of Disney plugging the film by showing off the source novel, admitting he's more of a dog person, and offering factual tidbits (for example, cats' facial muscles are the closest to humans; that must be a big shock to the ape family). Unfortunately this clip jumps into a newly-created montage of cat antics from other Disney films (The Lion King, The Aristocats, etc.) that goes on a little too long. The package is rounded out with the theatrical trailer (which includes some exclusive footage not found in the final film) and a stills gallery. Ignore the awful cover art, which makes this look like a kiddie show about a girl dressing her kitty up in Holly Hobby outfits.