Though its title inspires images of a Mexican-style ode to Mario Bava, Terror and Black Lace (Terror y Encajes Negros) actually offers a bizarre fusion of domestic melodrama, cheesecake ogling, and '80s-style stalk and slash. Of course, that still isn't too far from giallo territory, but the tone 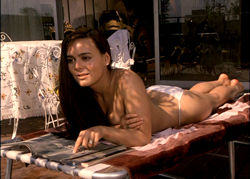 is closer to Bollywood homages to the genre in which nudity and blood take a backseat to more peculiar genre elements.

The first hour of the film follows the residents of a trendy, high-rise apartment complex: pretty young Isabel (Guardia, a former Miss Costa Rica), who enjoys hanging out with friends, chatting on the phone, and sunbathing topless; her domineering husband (Vega), a pig consumed by jealousy who never believes a word she says; and Cesar (Obregón), a middle-aged nutcase with a hair fetish who likes to snip off women's locks, sniff them, and store them in a closet in his bedroom. While the neighbors organize a loud party on one floor, Cesar is busy making the moves on one of the pretty residents who doesn't take kindly to his amateur barber techniques. When she tries to escape, he strangles her and drags the body out into the hall... much to the horror of Isabel, who 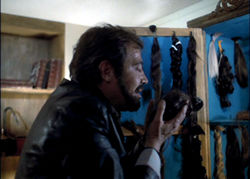 sees the whole thing from inside an elevator. With her husband out of the building and everyone else too occupied with partying to notice, Isabel flees from one floor to the next while an axe-wielding Cesar closes in.

Though it takes a while to kick into gear, Terror and Black Lace really purrs along during its final third devoted entirely to a cat-and-mouse chase in which Cesar and Isabel tear through elevator shafts, attics, storage areas, and even the rooftop, all accompanied by the tense thudding of disco music from below. For once the film also tries to come up with an (admittedly thin) excuse for the heroine's skimpy attire, as she's forced to remove her dress and shoes in order 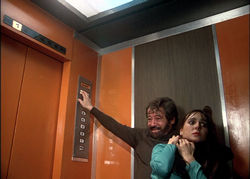 to hurl them onto oblivious policemen outside at ground level. Despite her character's sometimes ridiculous behavior, Guardia does a nice job with her role as she proves more capable of dealing with a crazed maniac than an abusive husband. Also, a bonus point for the strange, downbeat coda that veers far away from the standard slasher movie resolution. Incidentally, the packaging warns of "strong sexual content," which must refer to the frequent shots of Guardia's cleavage.

Mastered from the negative, Desert Mountain's DVD looks gorgeous from start to finish. Colors and detail are immaculate, and the open matte compositions work as is or zoomed-in to 1.78:1 on a widescreen TV. The stereo audio is also strong, with the music-driven final third working especially well. The optional English subtitles are well-rendered and often peppered by amusing profanity. No extras to speak of apart from cast bios.