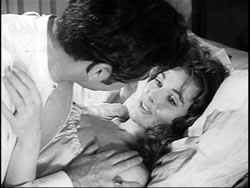 Though he'd been dead for over a century, writer Edgar Allan Poe became a hot cinematic property in the '60s thanks to a string of collaborations between Roger Corman and Vincent Price. Since then the Poe name has been slapped on hundreds of feature and short films, though his legacy stretches back to the silent era in a more subdued form. Made the same year Corman initiated his cycle with House of Usher and Alfred Hitchcock scared the pants off moviegoers with Psycho was a lesser-known but surprisingly gory British adaptation of The Tell-Tale Heart, one of Poe's most famous stories and an early screenplay by writer Brian Clemens, who later went on to glory with TV's The Avengers and the superlative '70s anthology show Thriller along with features like Captain Kronos, Vampire Hunter and And Soon the Darkness. What was originally a two-character gothic piece about a man driven to murder by his neighbor's overshaped, disconcerting eye is here transformed into a grisly love triangle complete with a William Castle-ish gimmick warning more sensitive viewers to beware when they hear a beating heart. Repressed librarian Edgar (Payne) develops a fixation on his sexy neighbor, Betty (Vampire Circus' Corri) (who doesn't sport a huge eye), who instead decides to go for Edgar's more aggressive best friend, Carl (Walsh). Needless to say, things do not go well. 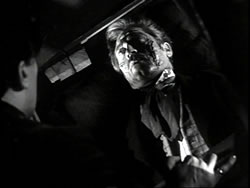 Shockingly gory for its time and still quite nightmarish at times, The Tell-Tale Heart can lay claim with Eyes without a Face and Black Sunday as one of the earliest gore films thanks to some graphic images of repeated mutilation with a fire poker and even some heart-ripping. The build-up is fairly slow and deliberate, but the final half hour is still fairly strong stuff complete with some nice surreal touches like a floor throbbing in time with the guilt-inducing heartbeat, and while the "gotcha!" twist ending seems like a sop added to ward off censors, the film as a whole still holds up well. Thanks to its public domain status, numerous awful-looking versions have shuffled around on VHS and DVD over the years including a widely available but unwatchable edition from budget line Alpha Video. Though still imperfect, the new telecine done for this Poe double feature is certainly several steps up; at least you can tell what's going on, and while there's still some obvious damage at numerous points in the print, it's a worthy upgrade for anyone who enjoys the film and wants to see it in something better than a blurry VHS-era transfer. 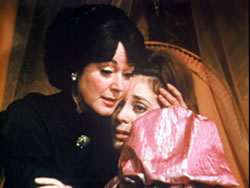 The co-feature on this disc, The Oval Portrait, is a much more subdued affair lensed in color and previously released on VHS under the title One Minute Before Death. Wanda Hendrix, best known for her stormy brief marriage to Audie Murphy, had her final role her in the tale of a post-Civil War mansion where a wounded Yankee soldier and a young daughter have instigated a horrific curse when he paints her portrait, damning any man who dares set foot inside the house after him. Years later, the portrait begins to exert a malicious influence on Genevieve Howard (Hendrix), who supposedly bears a striking resemblance to the painting's subject, her cousin 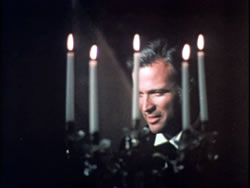 (though visual evidence suggests otherwise). She's there for the reading of a will, of course, and soon things start to get very spooky indeed as the past and present collide with ghostly results.

Soapy and definitely strange, The Oval Portrait is a Mexican production disguising itself with a roster of B-level American actors and lots of period trappings, including Civil War battle scenes! You have to give the filmmakers credit for trying, even if the end results will elicit shrugs in most horror fans used to the more flamboyant Vincent Price offerings. That said, the last half hour does offer a few notable flourishes including a peculiar, dream-like finale scene. For some reason the soundtrack is a mishmash of library tracks credited to Les Baxter, which Tim Lucas' perceptive liner notes point out as mostly excerpts from his score for Black Sunday. The liner notes also cover a lot of informational ground for both films, including the backgrounds for the cast and crew and thumbnail histories of the short stories' other cinematic incarnations. As for the picture quality, it looks okay considering the film was shot in 16mm and still looks like it. At least the disc looks better than the long-discontinued VHS version, which was very soft and smudgy. If you like overlooked Poe adaptations, this pairing is certainly worth a peek particularly for the still potent first feature.